Bikepacking from the beginning.

A founding component of the bikepacking movement, Revelate has been 100% dedicated to building bike bags longer than any other brand. Explore our journey here! 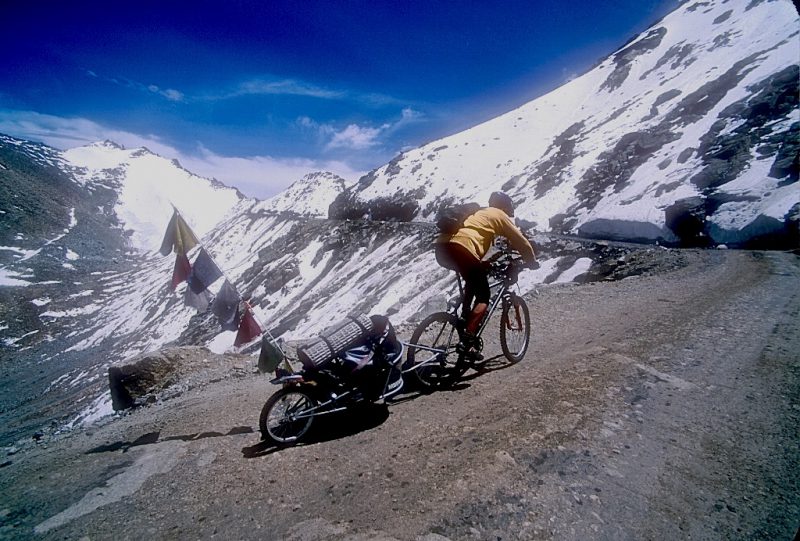 Revelate founder Eric Parsons and friend Dan Bailey go on a 2-month mountain bike tour to the Indian Himalaya. The pair tows trailers over some of the highest motor-able passes in the world (over 18,000’). Along the way they realize trailers are difficult to travel with and are one more big piece of equipment that can fail. 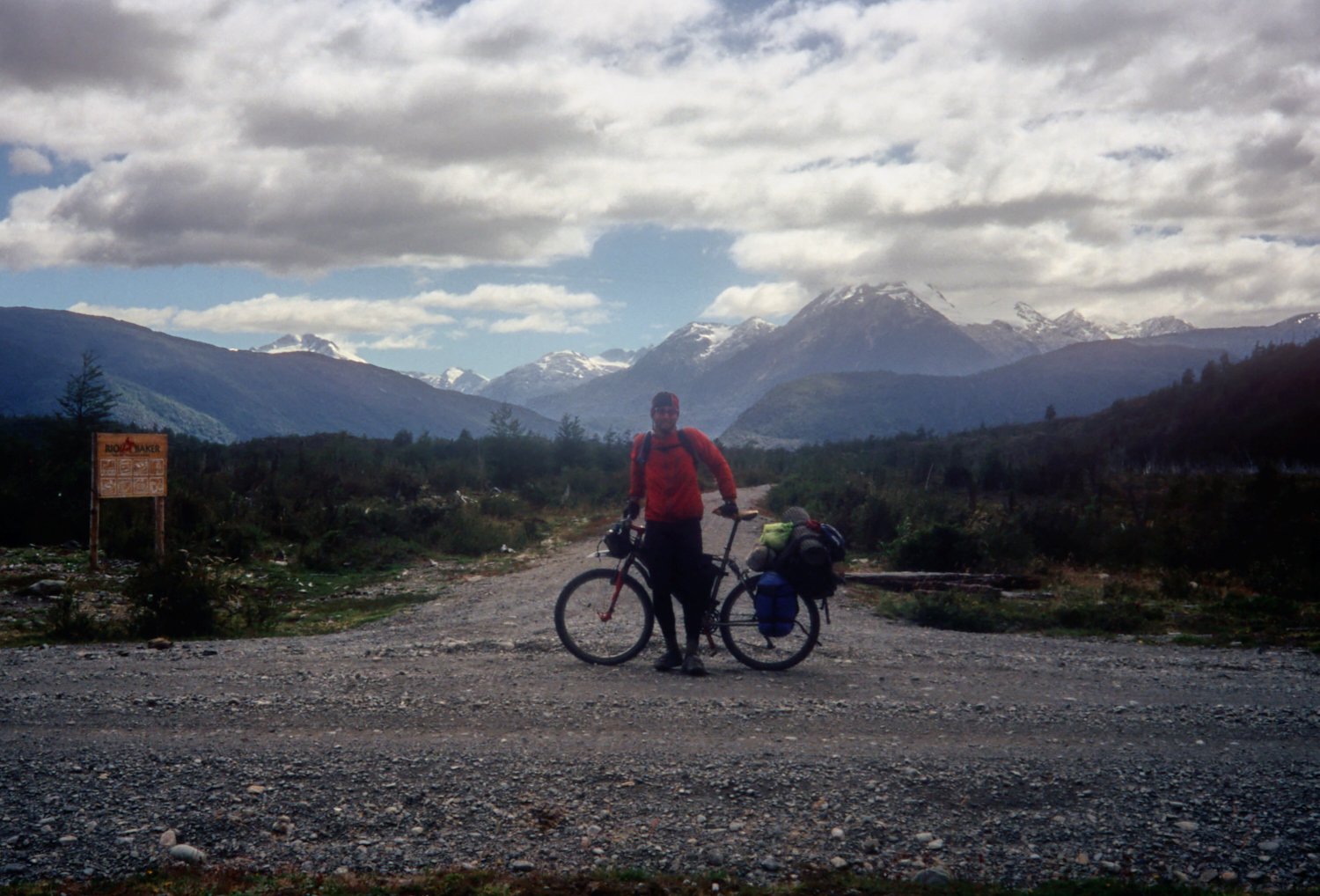 Fort Collins, Colorado: Eric’s friend sews a frame bag for him modeled after one Eric saw built for the Iditasport race in Alaska. After strapping together some other bags to a rack, he takes off for a 3-month mountain bike tour of Patagonia. He learns many lessons on this trip resulting from multiple failures of bike and gear in the harsh Patagonian climate. This is the first extended trip where he uses what later becomes known as a “bikepacking setup,” which includes a frame bag and minimalist gear. 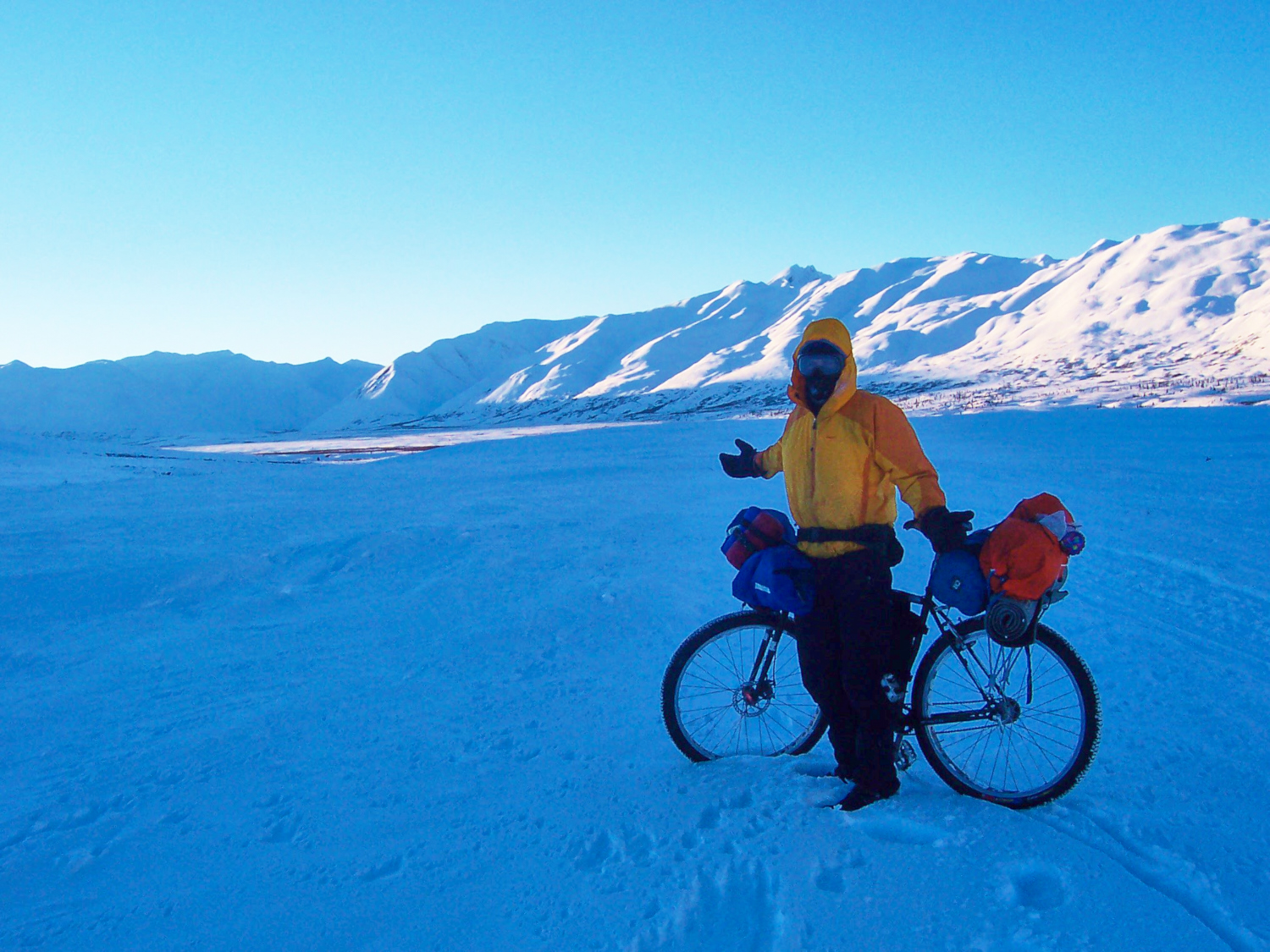 Alaska: Eric races the Alaska Ultra-Sport (29″ x 2.3″ were state of the art). Starts sewing and building his own gear, driven by the unique demands of Alaskan winter racing. He built the pogies on this bike from sleeves from a down jacket, modified with an external shell. Frame bag was the original from the 2002 Patagonia trip. 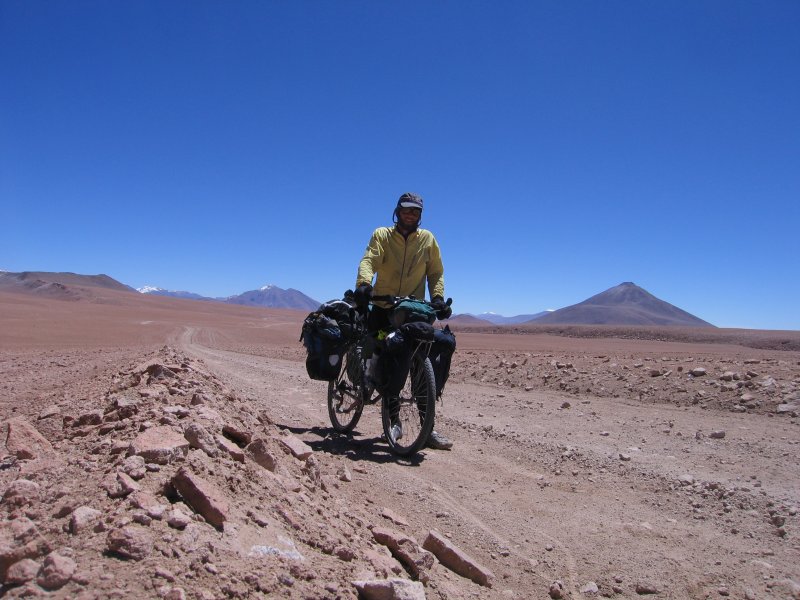 Eric embarks off on a 6-month expedition style tour from Ecuador to Bolivia. He tries using a hybrid approach of panniers mixed with homemade gear. A robbery early on causes him to stop in Quito to have new front bags custom altered to work for his trip. Overall, he brings too much stuff, but is able to carry enough food for 12 days on high traverses in the Bolivian Altiplano. Wishes 29+ tires existed back then! 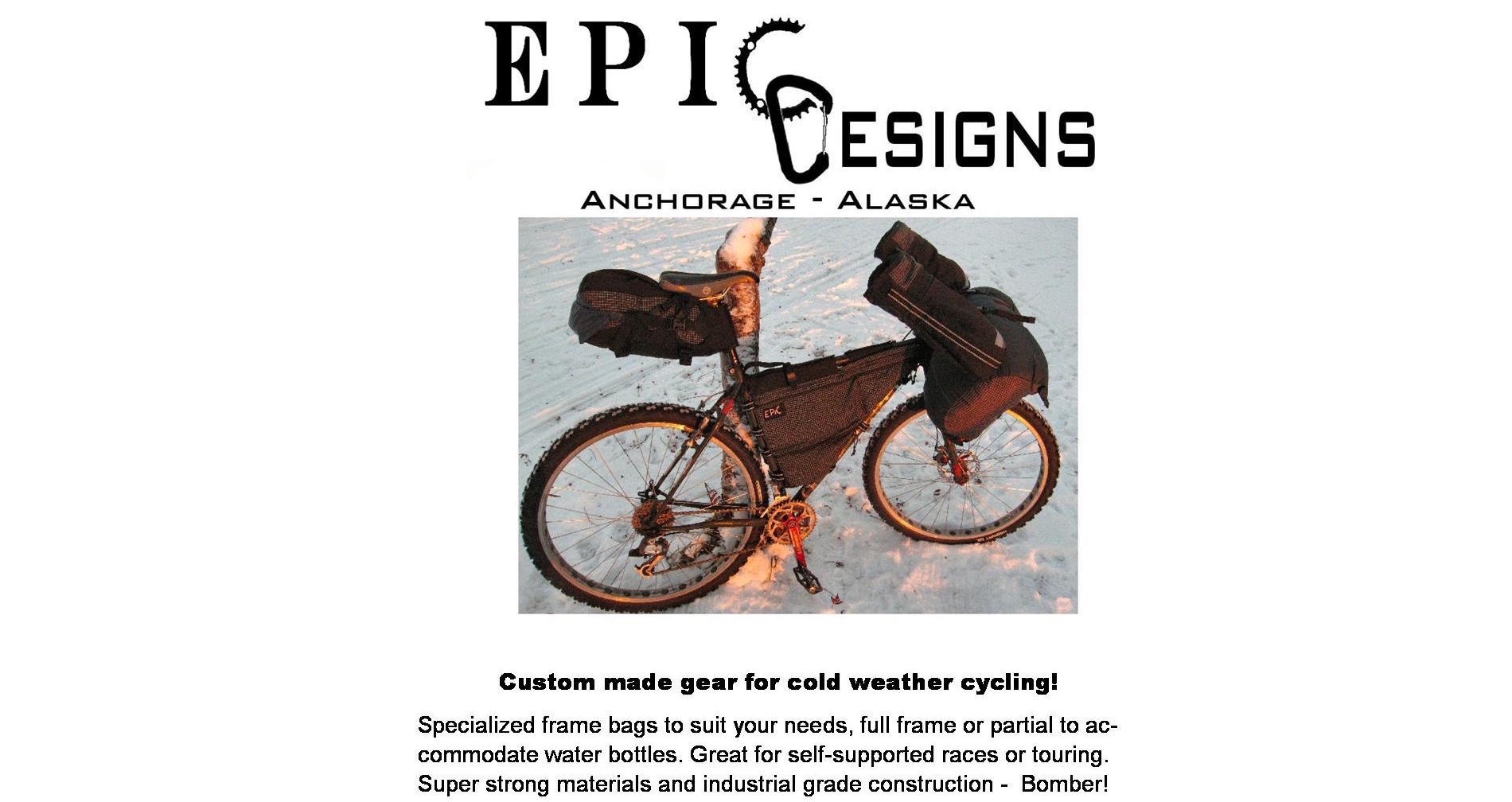 The day job is quit and Eric launches Epic Designs with a blog based “website” and starts selling first bags out of his basement in downtown Anchorage. Most customers are local Alaskans and mid-westerners needing frame bags for winter ultra races. The winter of 07’-08’ sees a fevered development in bags including the first Gas Tanks, Super Twinkie seat bags and Expedition Pogies all built for winter riding.

Eric and friend Dylan Kentch start incorporating packrafts into bike adventures. The pair starts with a starvation tour in Denali National Park and a mud-fest along Alaska’s Kenai Peninsula, and they finish with the groundbreaking Lost Coast traverse. Eric and Dylan traverse 350 miles of rugged Alaskan coastline by fatbike and packraft, enduring heinous bushwacks, calving glaciers, 30+ bears and gulf coast storms. It was the first summertime expedition use of fatbikes in Alaska, and the first time fat-tired bikes had been combined with packrafts expedition style. 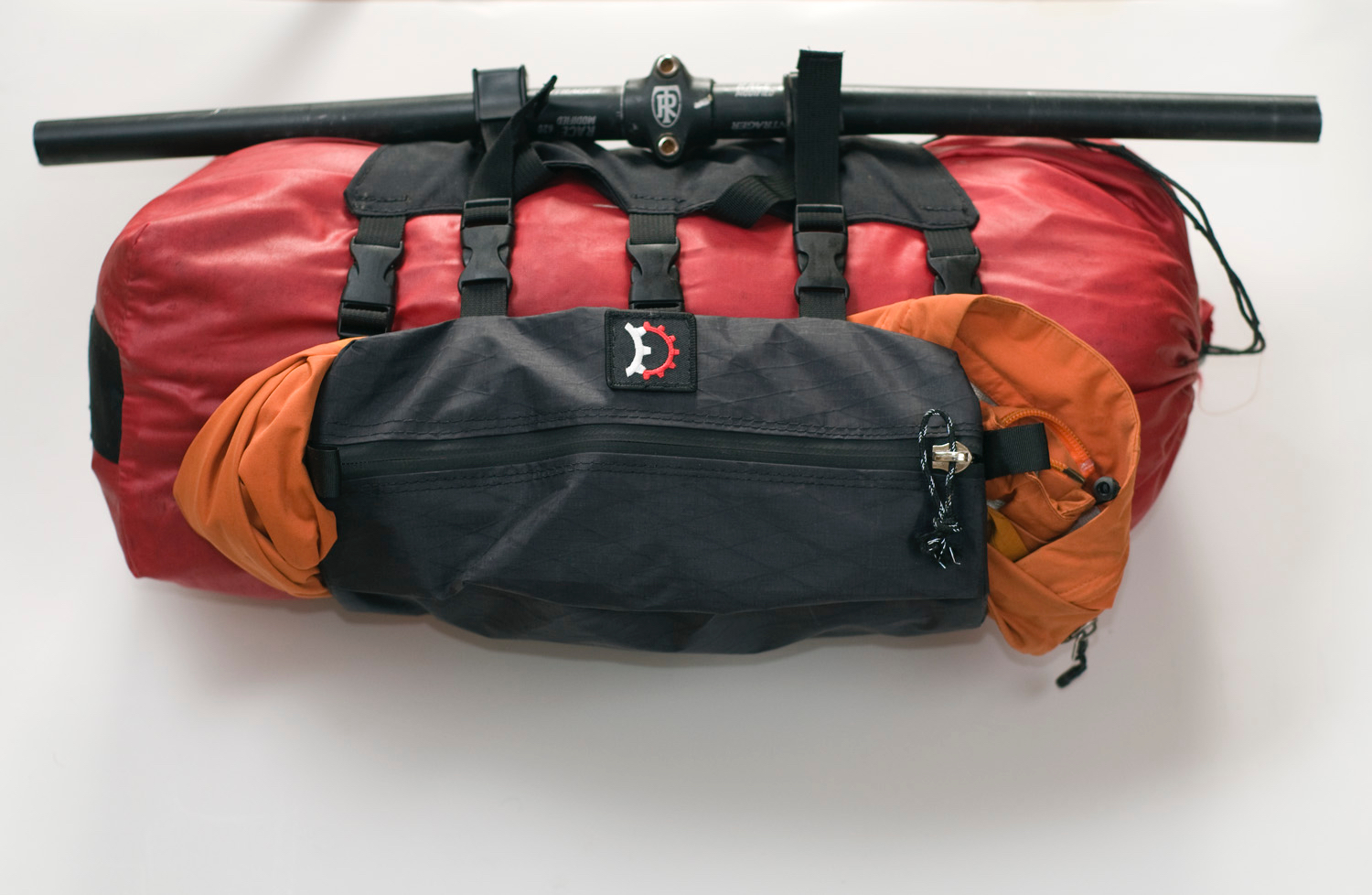 Influenced by using a backpack lid as a handlebar bag, the first iteration of the Harness was released. The system was versatile enough for all-season use and was the first bar bag of its kind that incorporated a drybag and removable front pocket. Overtime the concept has become an industry standard. 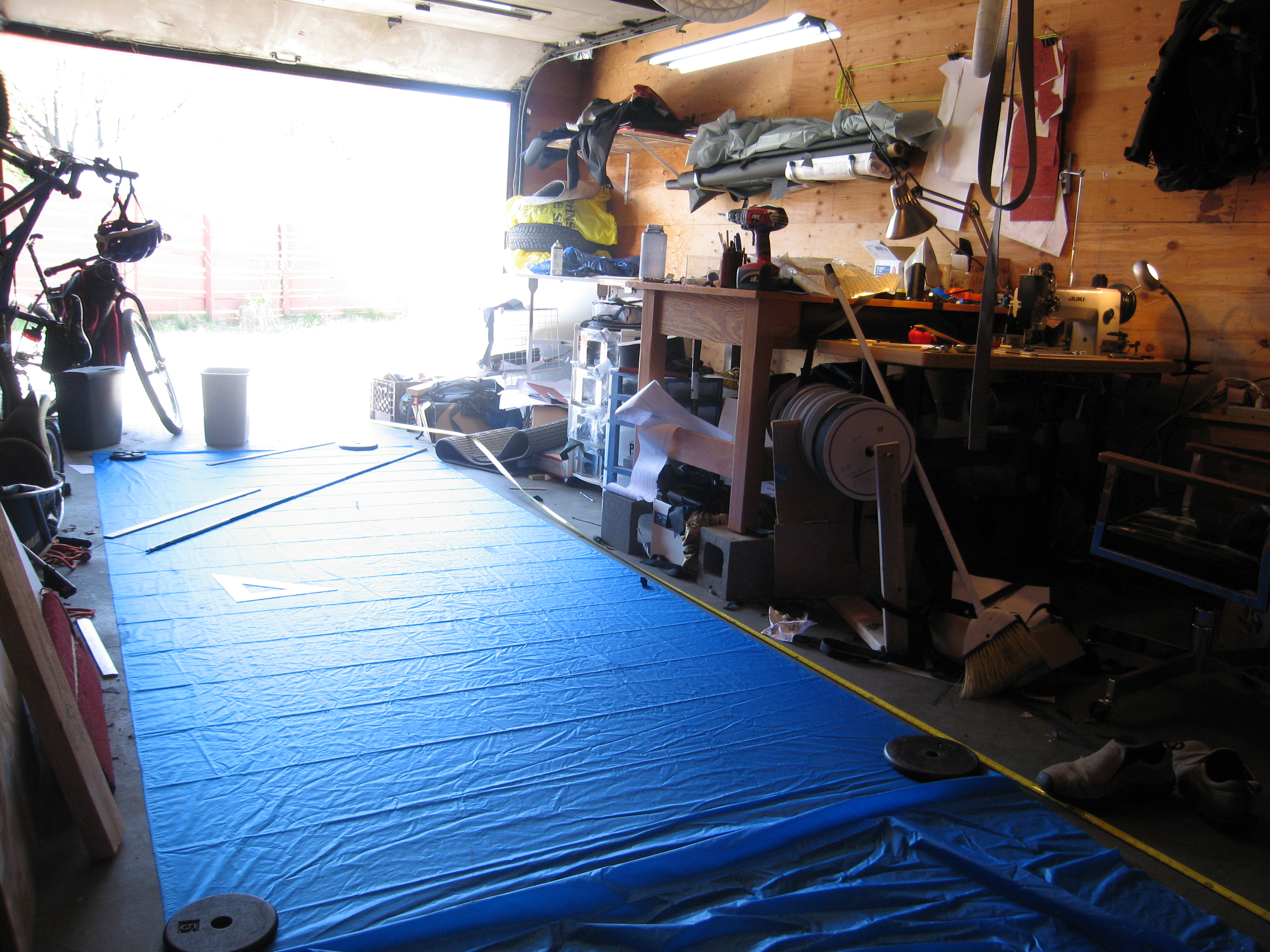 The work space for Epic Designs graduates from a basement to an unheated one-car garage. The sewing machine and 4’x8′ plywood table move into several different spaces over the next year, enduring bum landlords and cramped rooms. Eventually a good friend takes pity and lets us move into his garage, where we (over) stay for a year and a half before finding our own garage to call home! 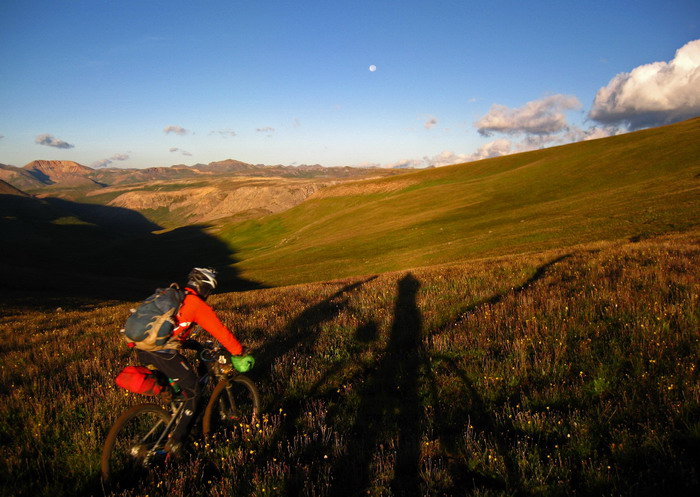 Epic Designs departs its winter roots and gets heavily engaged in building gear for racers taking on events like the Tour Divide, Colorado Trail Race and Arizona Trail Race. Eric makes lasting connections with core riders of these events, including Scott Morris, Kurt Refsnider, and Chris Plesk; they contribute feedback on the early gear and form an underground ambassador program. 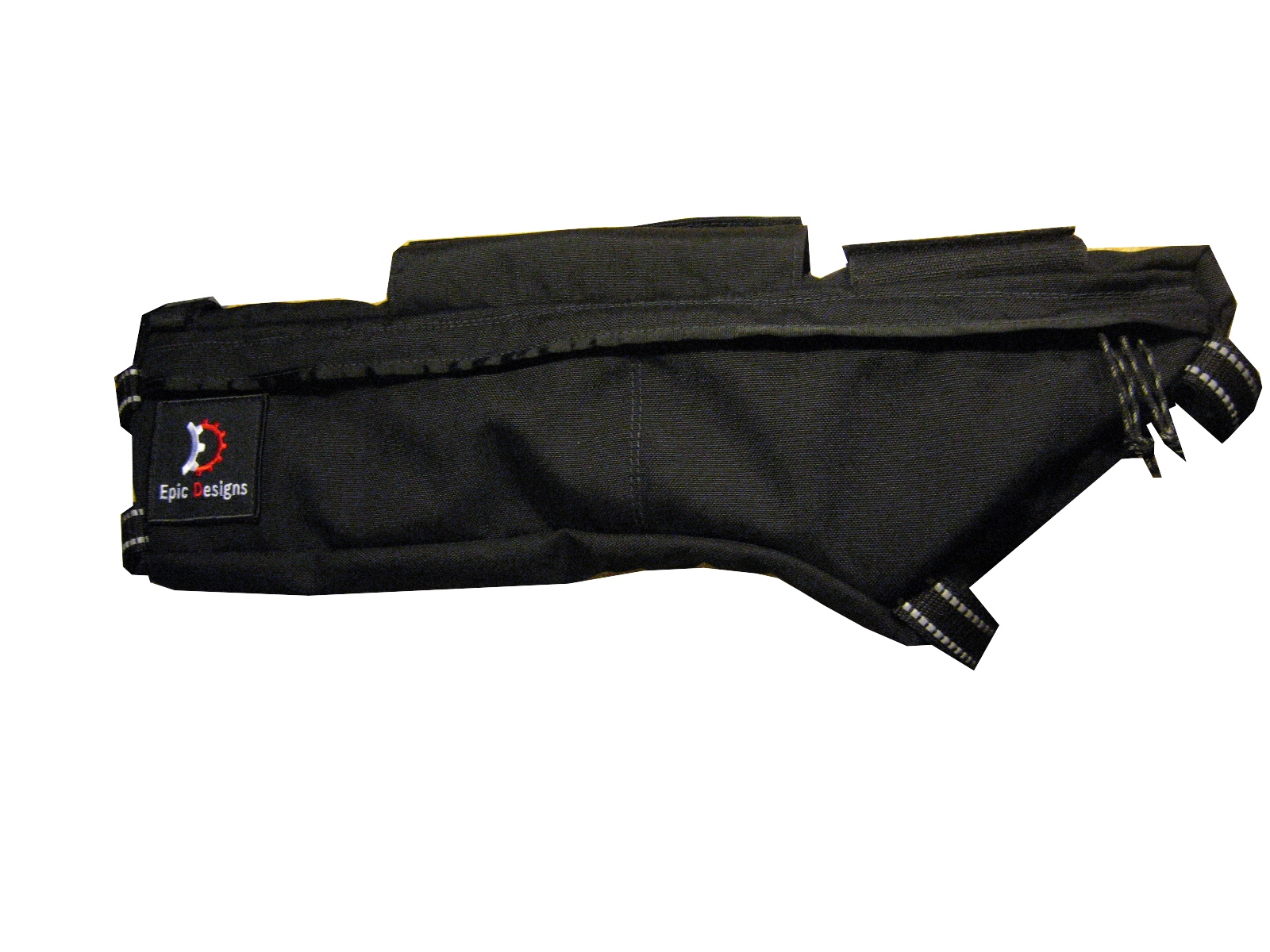 Epic Designs is forced to re-brand as Revelate Designs due to a trademark conflict. The launch of Revelate is taken in stride, and the team welcomes changes that include a new website and the lasting partnership with an Oregon-based cut and sew manufacturer. With newfound expertise and increased sewing capacity, the first production Tangle Frame bags and handlebar pockets are released. Our gear logo still signifies our roots as Epic Designs. 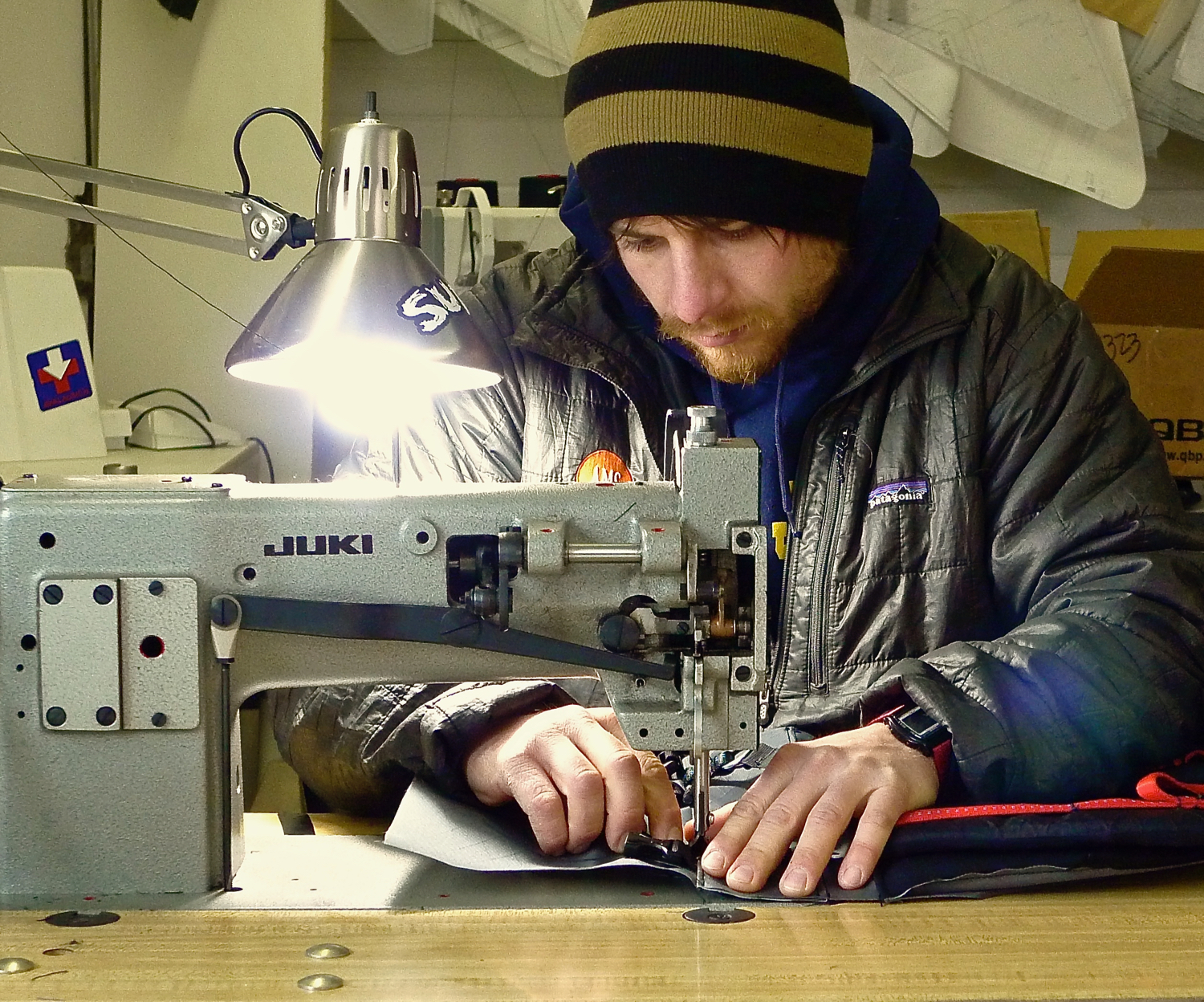 Return to the Lost Coast!

An all star cast of Mike Curiak, Roman Dial, DOOM, Dylan Kentch and Eric fly to Yakatut Alaska with fatbikes to traverse the southern half of the Gulf of Alaska coastline with bikes and packrafts. The engaging route covers pristine beaches, boulder ridden headlands, glaciers calving into the ocean and extended paddling. Dylan gets a ticket from a ranger for peeing on the dock at the final take out after a 4-hour paddle across Glacier Bay. Otherwise we had a total blast! 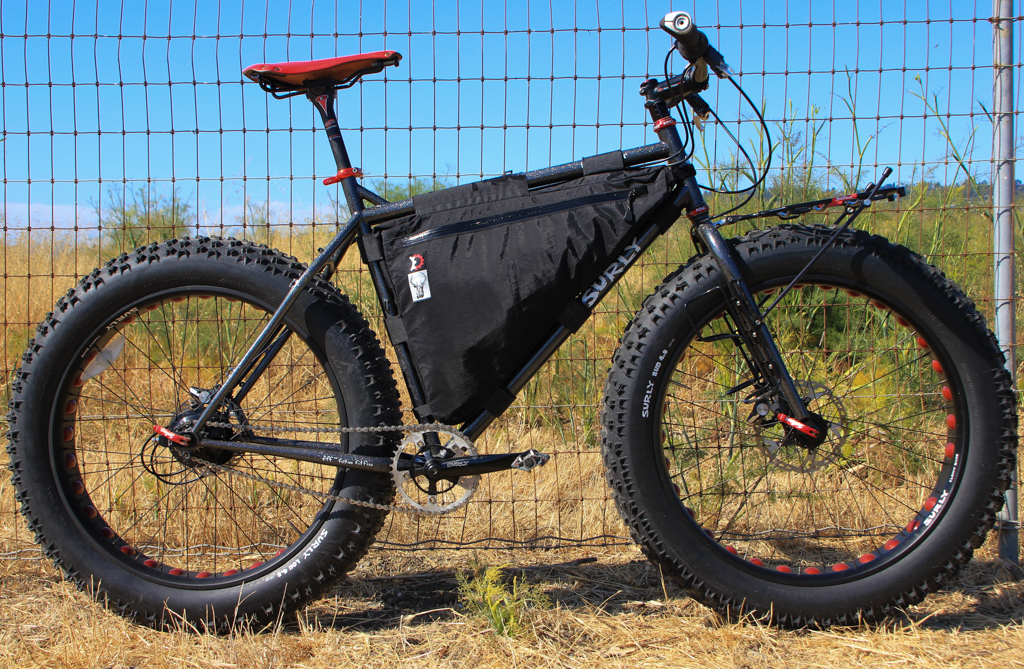 Revelate teams up with Surly bikes and Salsa Cycles to build co-branded full-size frame bags for several of their adventure bike models. Being the first non-custom full size options that are widely available to bike shops, they were a hit! The partnership nudges bikepacking into the mainstream by making the bikes adventure ready off the bike shop floor. 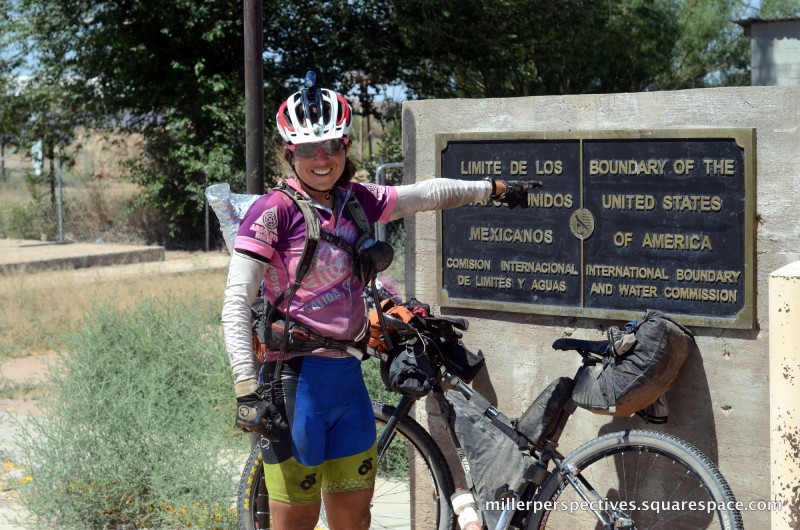 Revelate customers crush it all over in endurance events! The late and great Mike Hall completes the 18,000+ mile World Cycle Race with Revelate gear. Forcing us to do a double take and look back at shipping records. Eszter Horanyi and Olie Whaley both win and set records in the Tour Divide, Eszter wins women’s overall and Olie takes home a new men’s record, on a single speed no less. 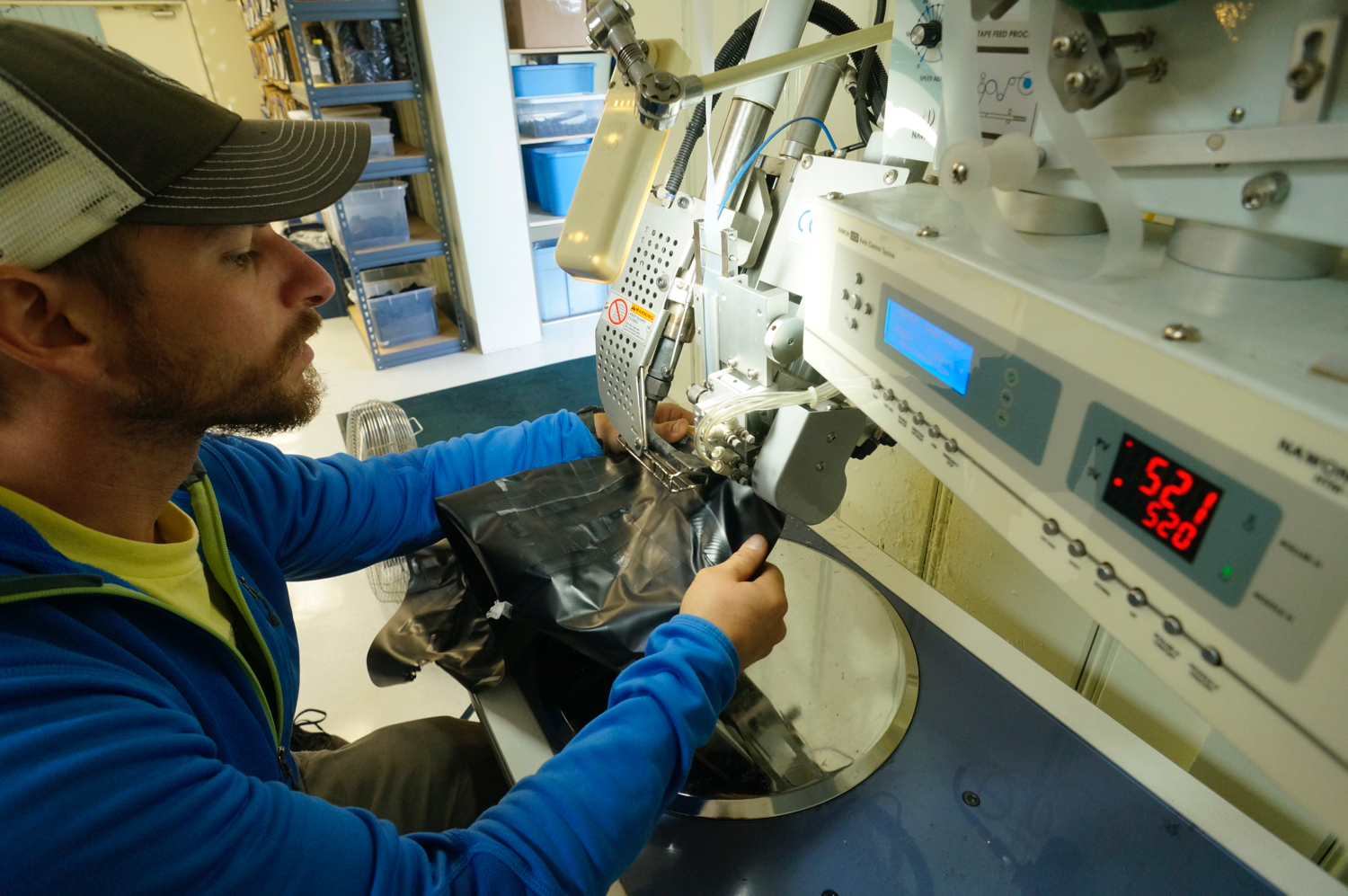 Driven to make the first waterproof bikepacking gear, Revelate purchases a seam taping machine and releases the Terrapin and Sweetroll bags. The first fully waterproof seat and handlebar bags on the market built specifically for bikepacking, they are later improved with RF welding technology. 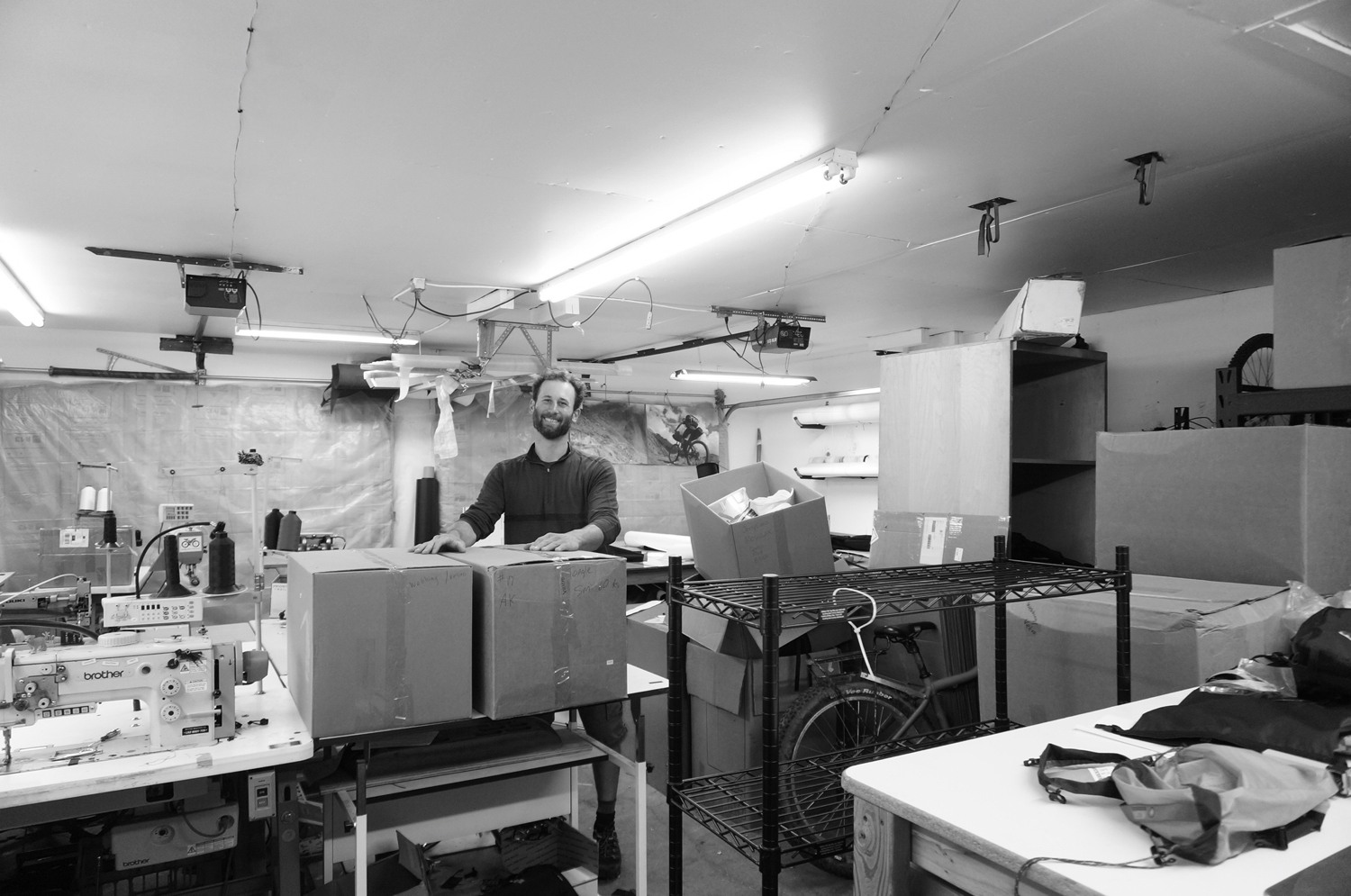 After progressing through 5 garage workshops since the business started, Revelate leaves its 2-car garage and moves into a legit commercial space in Anchorage. Gone are the days of mid-day burrito making in favor of larger production and storage space!

Revelate incorporates a new, expedition-worthy zipper system into all frame bags, which drastically improves zipper durability and life over urethane-coated coil zippers. Our “zipstretch construction” combines with a beefy molded-tooth zipper with a custom-made stretch fabric to allow frame bags to adjust to larger loads while reducing stress on the zipper. We see the new bags come back from multi-year expeditions without any problems. Our warranty staff gets bored. 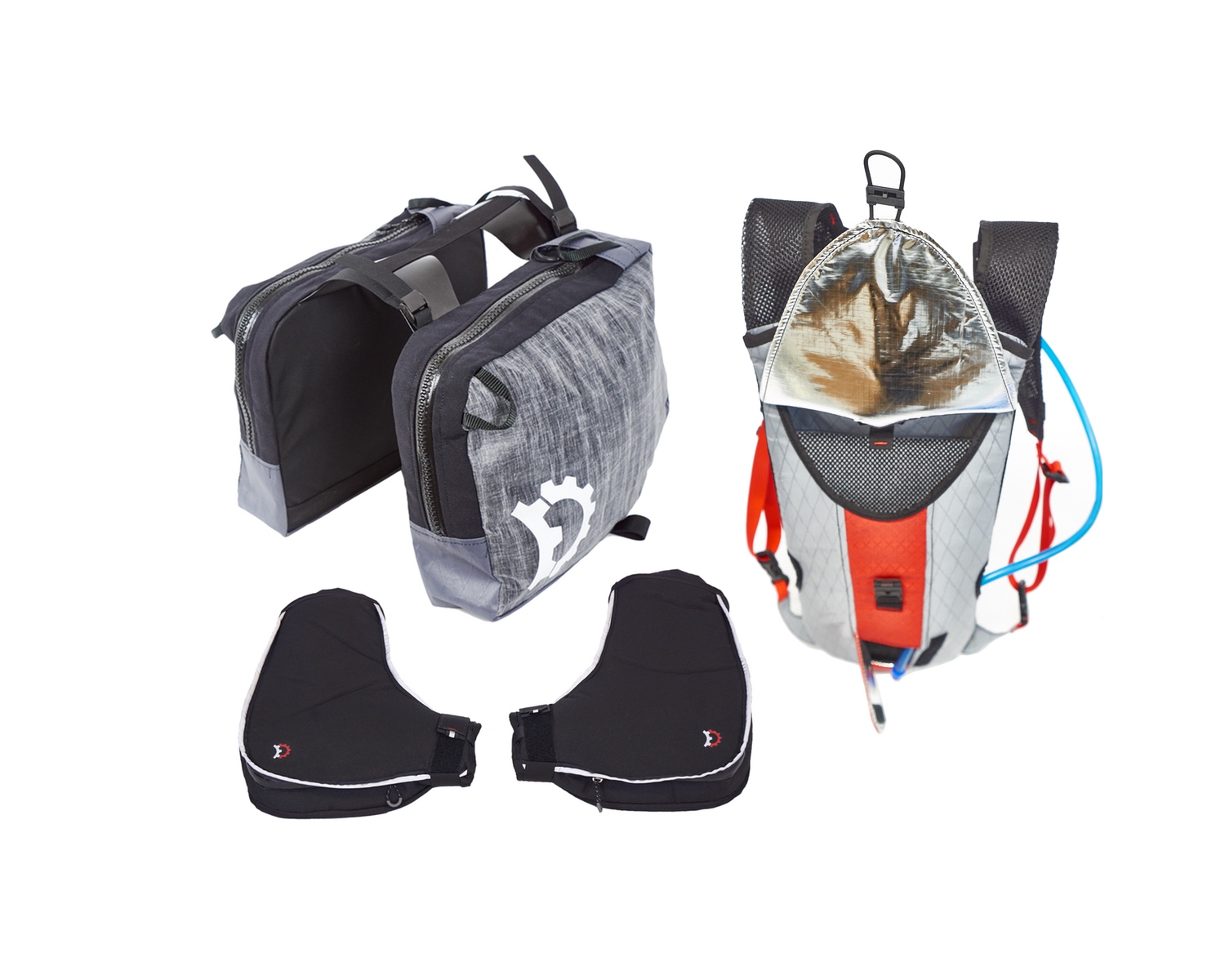 Keeping to our northern roots, a slew of winter-specific niche products are released. These include the Wampak winter Hydration pack, Williwaw Pogies and Nano Panniers. In the spring, a Revelate party of 9 flies to McGrath and rides the first 350 miles of the Iditarod trail in reverse back to Anchorage. Product testing should always be this fun! 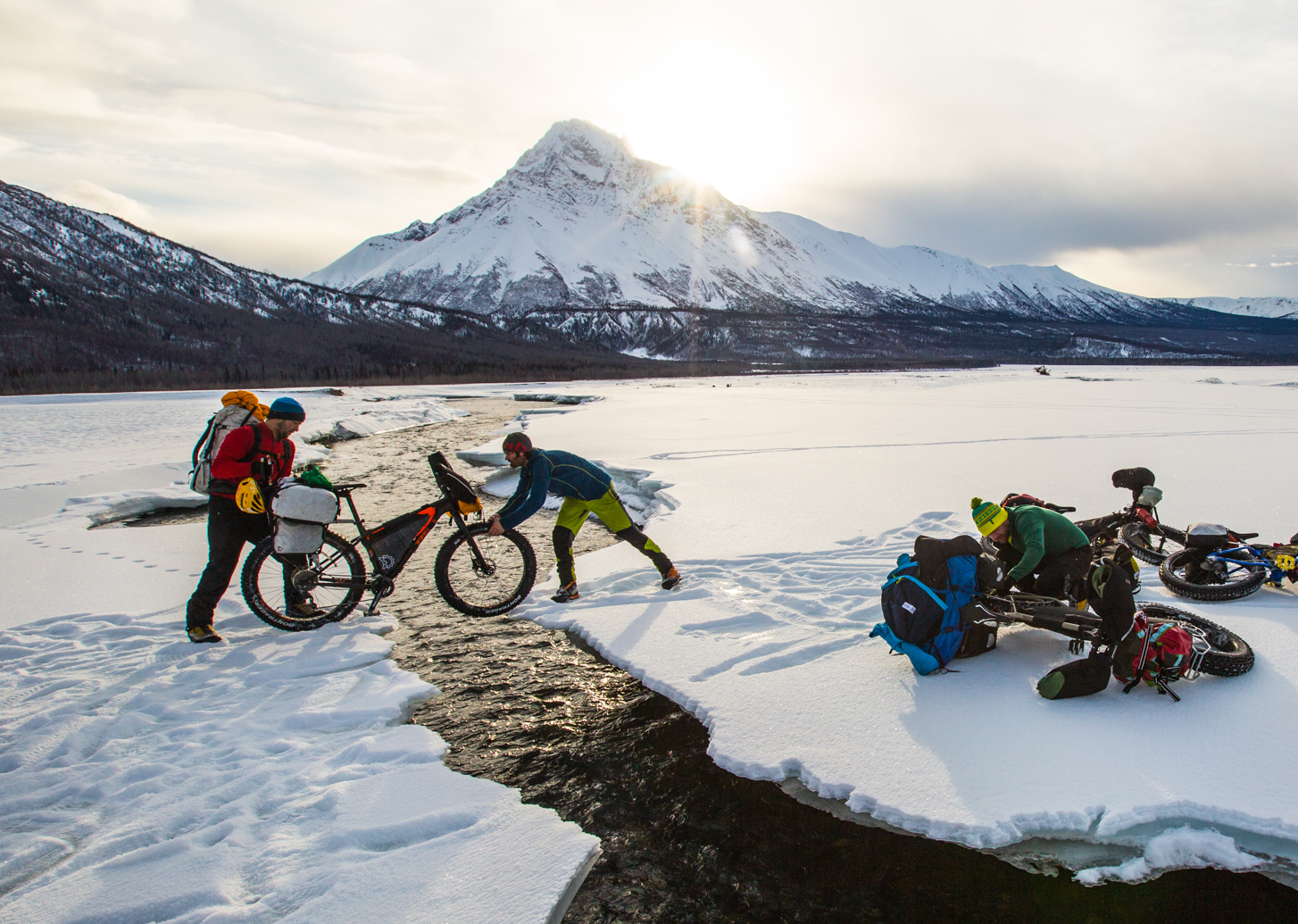 Dusty leads a crack team of his climbing friends deep into Wrangell St. Elias National Park on fat bikes in winter to explore ice climbs in the upper Chitistone gorge. The crew gets lost and falls into rivers, but succeeds in finding and climbing legendary ice flows in the remote wilderness. 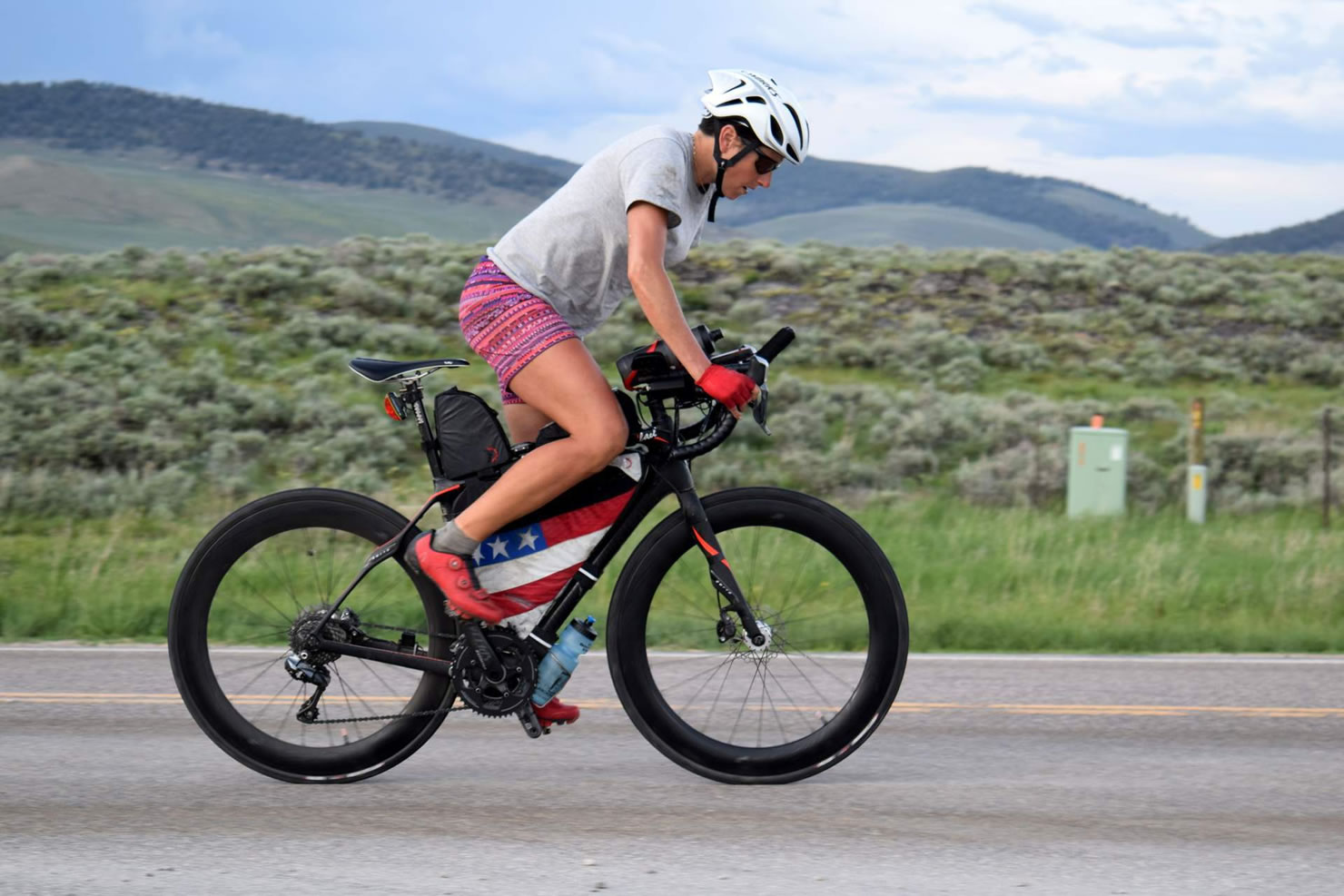 Coming off a banner year of shattering the Tour Divide women’s record, friend, Anchorage Alaska local, and Revelate Ambassador Lael Wilcox cements herself as a force to be reckoned with by winning the 2016 Trans-America race. Covering 4,400 miles in 18 days, averaging 235 miles a day, she beats all male racers and continues to prove there’s just one category in endurance racing: fast. Never one to tire, Lael continues to take on big challenges for the overall win internationally. 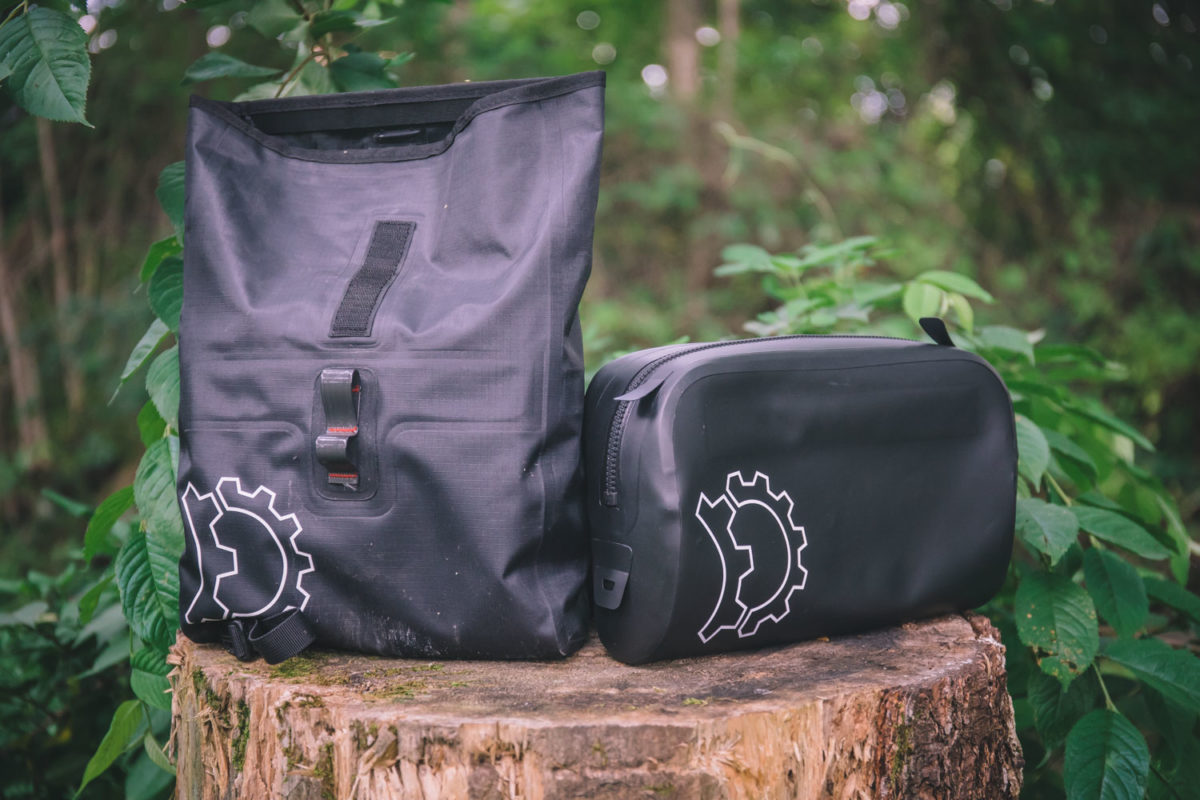 Revelate releases the waterproof Egress pocket and fully sealed Yakataga Pocket. The class-leading Egress incorporates a contoured side profile, a padded liner and multiple attachment options. The specialty Yakataga pocket, inspired by bikerafting adventure trips, is fully submersible and quickly detaches from the bike for transitioning to paddle mode.

Eric and Luc Mehl fly out to western bush Alaska to attempt a traverse of a remote 100-mile-long ridge feature. Although they underestimated the route and turned around, the trip was notable for its remoteness and hard-earned, high quality adventure riding. 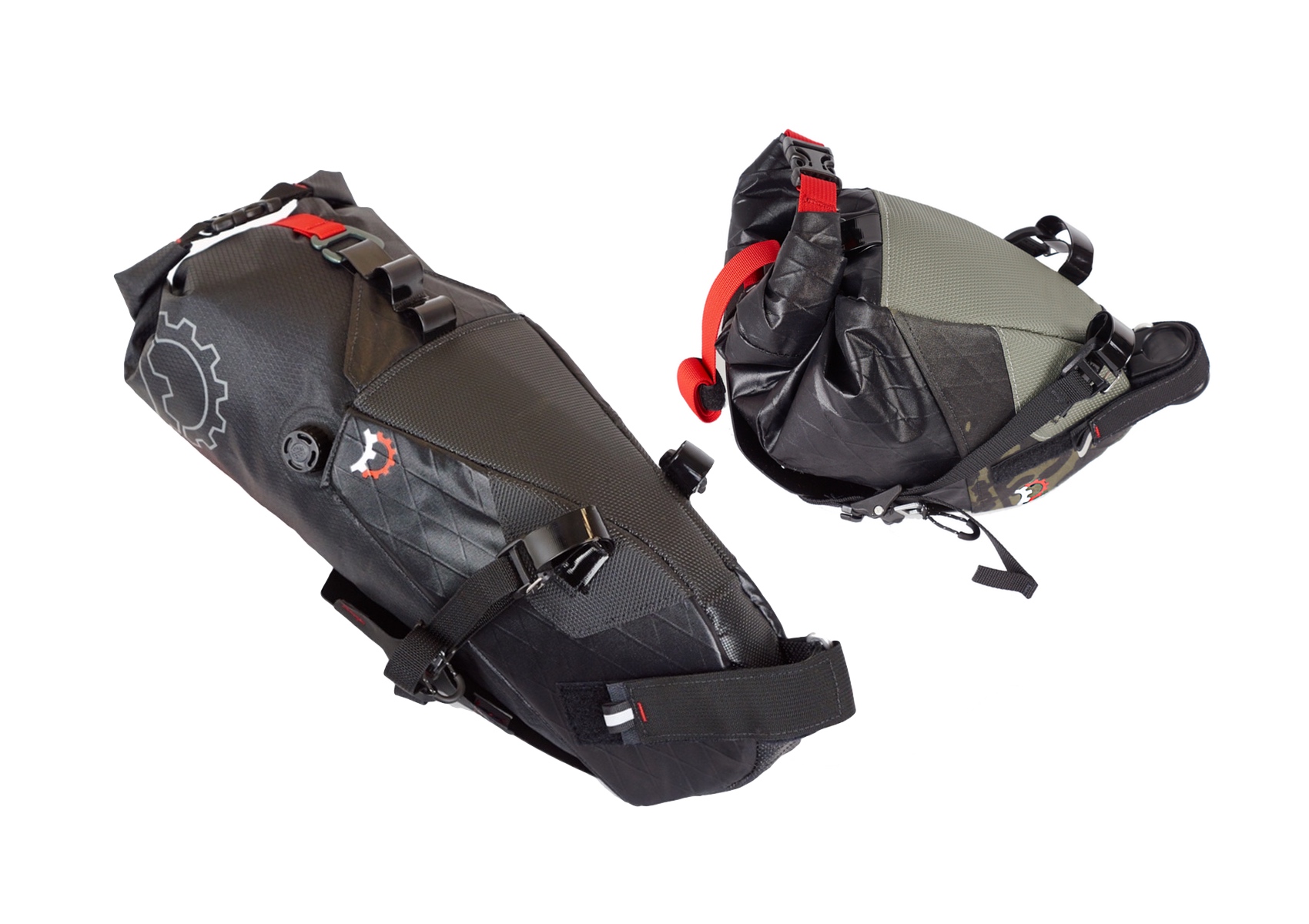 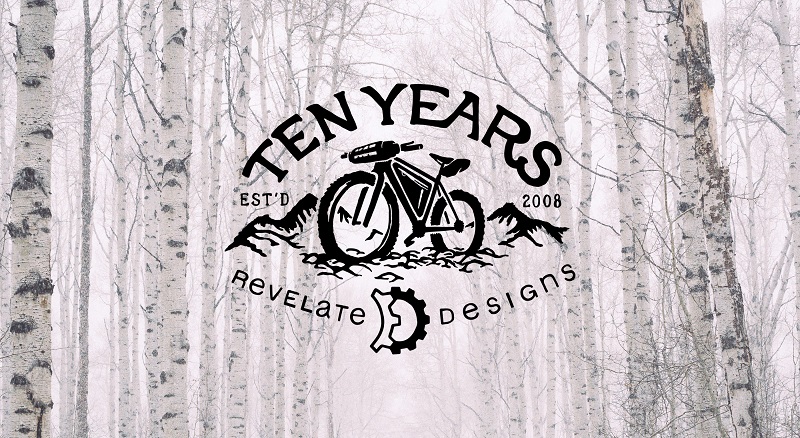 With 10 years of innovating under our belt, we’re grateful to those who have supported us along the ride. We’ll continue to design and build the best products we can to make tomorrow’s bike adventures a reality!