How a Hardcore Alpine Climber Got a Job Making Bikepacking Gear

Posted by Lizzy Scully in Ambassadors

“Do you know what Revelate Designs (Epic Designs) does?” Eric Parsons asks Dusty Eroh during his first job interview.

“How about bikepacking… do you ride bikes?”

“Umm, I really like to climb and love alpine climbing! It’s the best!”

“No, but I did sew the button back on my pants! It’s not there anymore, but it stayed for a long time…. So do I have the job?”

“Maybe some shipping or something. We will figure it out.”

“Is it cool if I leave all summer and go guide on Denali?”

When Dusty Eroh first approached Revelate Designs’ owner Eric Parsons, he wasn’t expecting to get a job. In fact, he says, “Looking back I must have been the worst choice for an employee.”

But on a recommendation from Roman Dial, one of Eroh’s professors and a legend in the adventure world, Parsons opted to hire him. It didn’t take long for Eroh to graduate from random odd jobs at Revelate to learning to sew. Shortly after, Dusty was designing and testing gear.

“If you asked me eight years ago, I never would have thought that would have happened,” Eroh explains.

Things have changed significantly since Eroh started at Revelate. Not only has he learned to bikepack, race bikes in the wilderness, sew bikepacking gear, and dedicate himself to a cool job, he says, but the company has also grown exponentially over the past ten years. (See the timeline).

Plus, he adds, “we have a heated building, and so I don’t have wear my parka while I’m working anymore.” 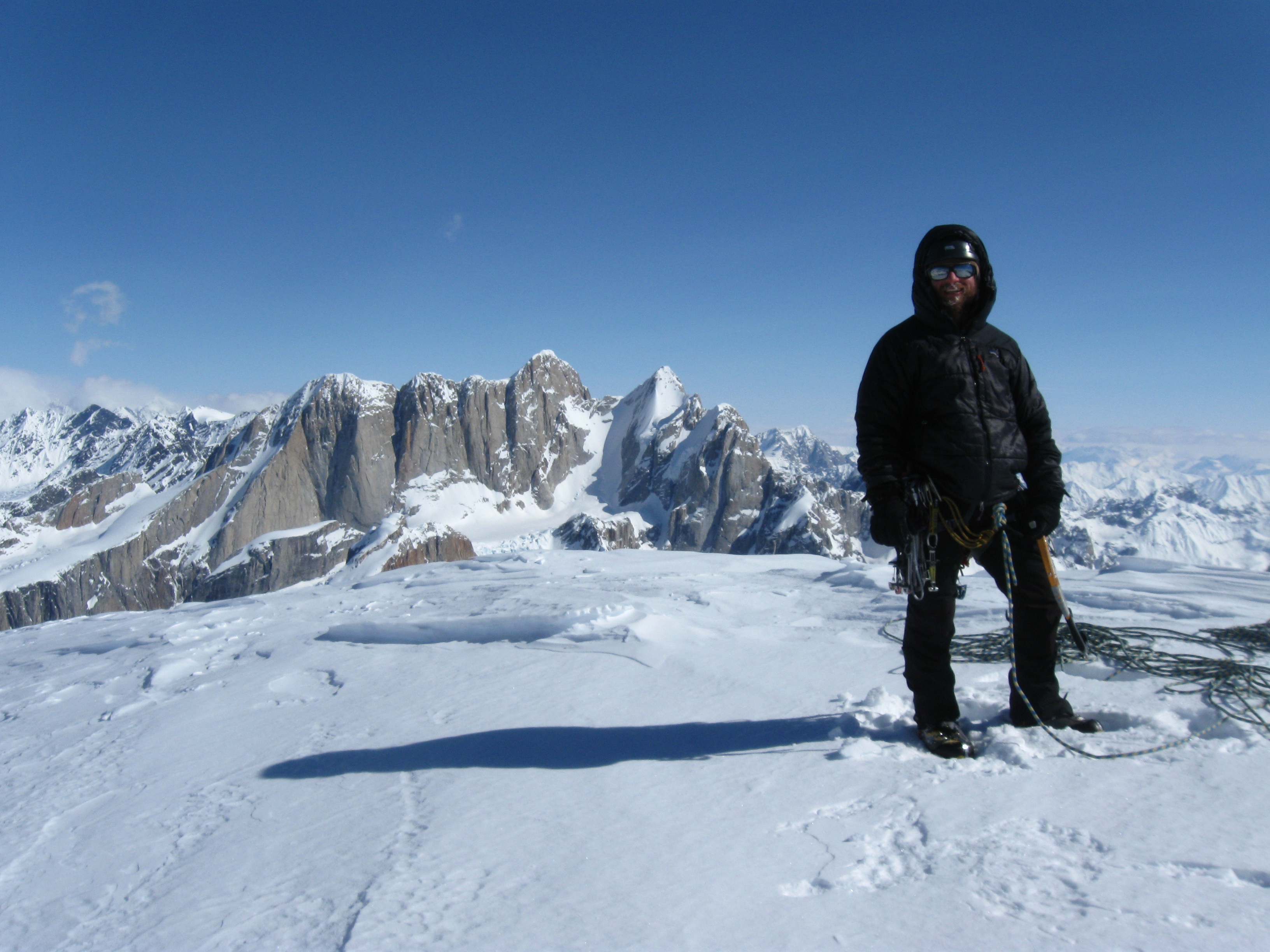 Eroh on the summit of Mt. Bradley after the first accent of Neve Ruse, with the Moose’s Tooth in the background.

From Alpine Climbing to Bikepacking

Though Eroh didn’t initially bikepack, or even do much riding, his experience with alpine, rock, and ice climbing set the stage for his future bikepacking and enduro race endeavors.

Climbing consumed him for over a decade. He focused on expanding his skill set, learning several climbing styles, along with snowboarding.

“I threw myself at trying to be better,” Eroh explains. “I took any opportunity to fly into the Alaska Range to try known routes and even a few new lines. I failed many times, but I also pushed myself to try more committing routes, specifically ones where I had to summit to get down or where I needed to climb in a short weather window to avoid exposure.”

Crossing the Nizina River in the winter.

But then, a few years ago, Eroh started to spend more time bikepacking.

“I started biking more and more in the summer, and I used my bike as a mode of transportation to get to winter climbs,” he explains. “I realized I really enjoyed being on my bike, and there was something in multi-day bike adventures that reminded me of alpine climbing.”

And while he didn’t feel the “terrifying joy” he’d get from climbing something hard or scary, he challenged himself physically and mentally in similar ways, especially when he started endurance bike racing.

“I could push myself on a bike just like I could with climbing, minus the ‘no fall’ portion, of course!” Eroh says, explaining one of the tenants of ice climbing (don’t ever fall).

Other reasons contributed to his shift of focus, he says. “It’s easier to juggle relationships, time, and finances on a bike than it is to fly to exotic locations to find ribbons of ice flowing down a small cleft on a remote peak.” 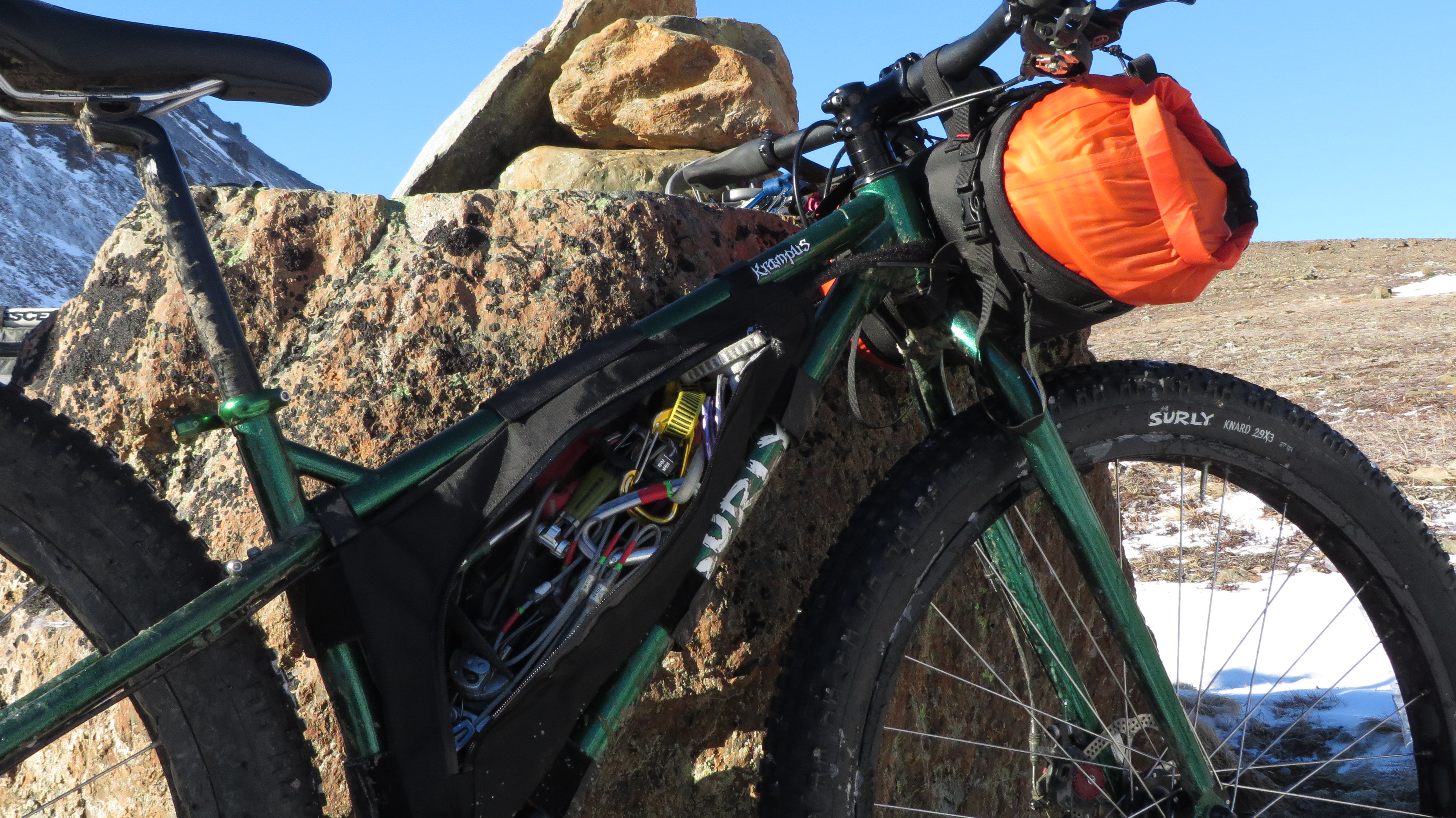 Riding bikes also gave him the opportunity to really explore Alaska, often by himself.

“I’d just go check out a cool area and use my bike to get there,” he explains. “I wanted to explore all the trails on the Kenai Peninsula, and I had been scheming a way to do this all on my bike. I, of course, was not the first person to think this was a cool idea. In fact, I was probably the thousandth. I told my Eric my plans, and he looked at me a bit awkwardly and said, ‘that’s the Kenai 250.’ I looked it up, and sure enough it was a bike race that covered almost every single section of single track on the Kenai and linked them together for one massive race!”

Just two weeks before the 2016 Kenai 250 started, Eroh decided to enter. His rig started out weighing 50 pounds. Knowing he needed to go lighter and faster to have any chance of success, he dumped his sleeping bag. “I wasn’t planning on sleeping anyway,” he explains.

And because he had already done open bivies at -20 degrees in the snow, while sleeping on his climbing ropes, he got rid of his puffy jacket.

“In the end I only brought a few pounds of gear and enough food so I would only have to stop once,” Eroh explains. After 34 hours of biking through 50-degree temps and pouring rain, he finished second place, just 15 minutes behind the winner. He and the other people on the podium were the first bikers to have ever done the race in a single push. 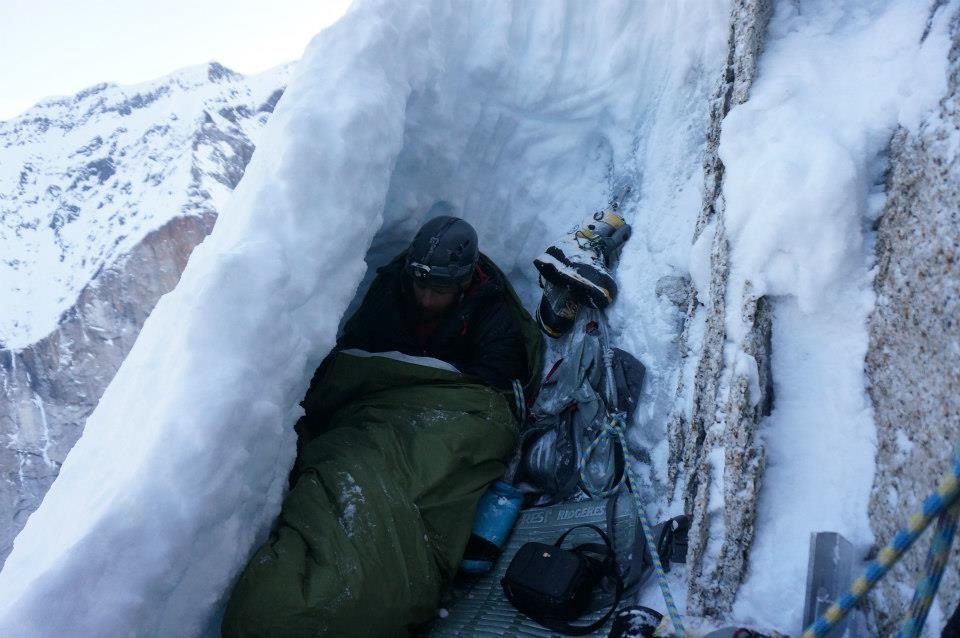 Bivouacked up on the first ascent of Neve Ruse on Mt. Bradley

Eroh doesn’t think alpine climbing made him a good biker, but he admits it did teach him how to suffer.

“With a background in alpine climbing I knew my ‘super power’ in ultra bike racing—suffering,” he says. “Bring less and move faster because the time you suffer will be shorter. I can’t say I enjoy pain, and I can’t say that I don’t complain about being uncomfortable, but I do enjoy the exhaustion after completing a massive undertaking. To me, finishing these bike races is something similar to topping out on a killer mixed ice, snow, and rock route and returning safely back to my tent.”

Eroh still doesn’t think he’s a fast cyclist, and has only earned second place in most of his bike races. But, he thinks, soon enough he’ll get the gold. He’s also not going to stop climbing anytime soon. But, his objectives have changed.

“I like combining the things I love to do now,” he explains. “I bike to ice climbs, so if I get shut down on the ice, I still get a cool bike trip out of it. It’s a great way to maximize the fun on a trip.” 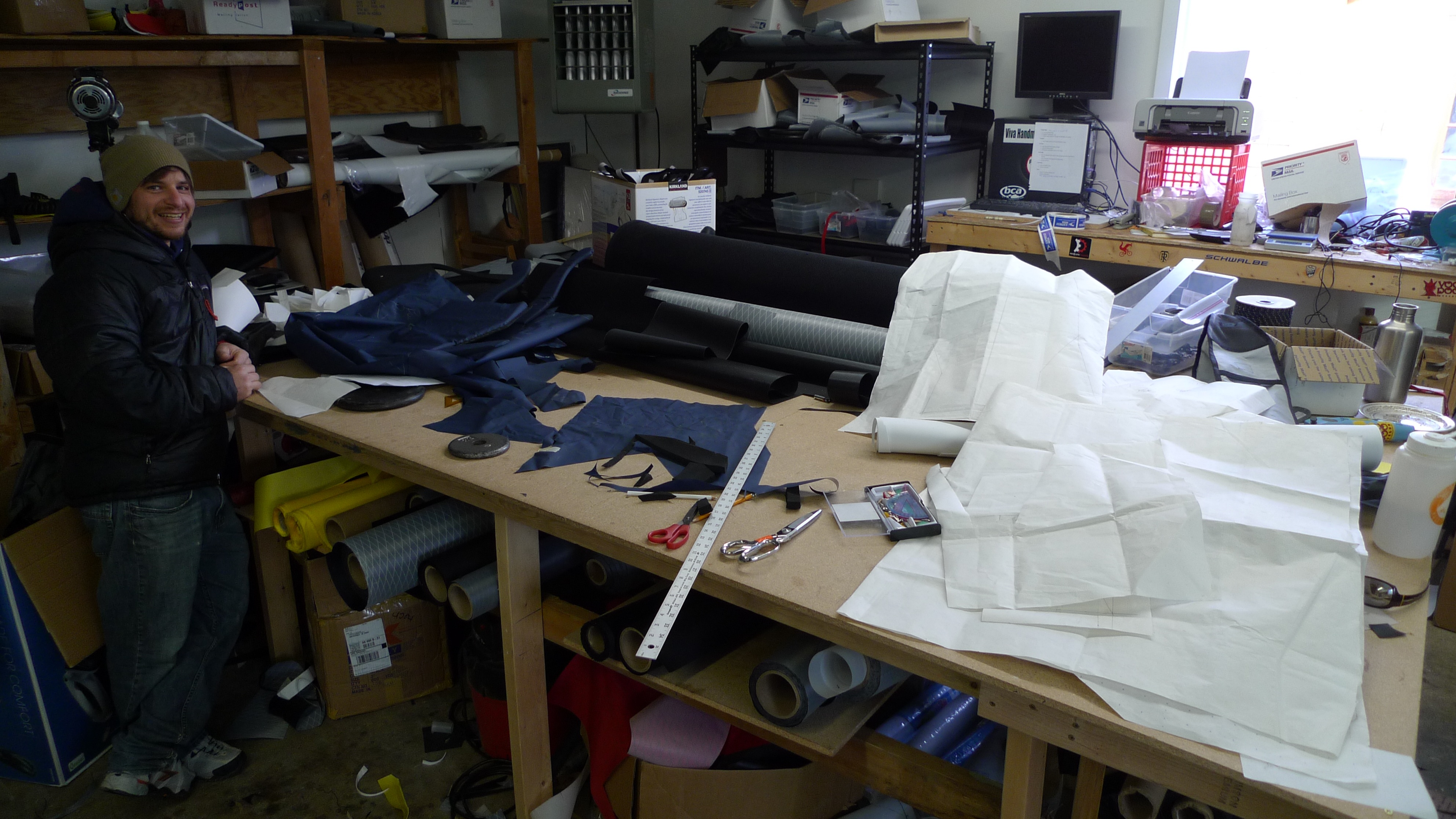 How To Become a Bike Bag Designer

Eroh’s journey from climbing to endurance bike racing coincided in many ways with his journey from doing random odd jobs at Revelate to becoming one of the company’s key designers.

Eroh applies the light and fast mentality he learned through alpine climbing to his design work.

“I bring a unique perspective to the company,” he explains. “I like to design gear that will work for me during ultra races or backcountry trips.” That, he adds, is one of the key things that sets the company apart from the competition. “We make the gear we want or need to use.”

Both Eroh and Parsons are meticulous about their work, hand-crafting each product and reworking it to perfection before sending it into production.

“I’d never send a prototype out with another rider on an extreme trip without testing it first myself,” he says. “If something were to happen because a piece of gear I made failed, that would be unacceptable.”

And, when he finally gets a piece of gear right, he says, that makes the entire process more than worthwhile.

“Working at Revelate has been great for me,” Eroh says. “I love that it allows me to be outside, using the products.” Not only does that direct experience help him with the design process–he can see the gear’s fullest potential and its flaws–but, he says, “it’s just fun to get out on my bike for product testing!”

Eroh doesn’t know exactly what the future holds for him (except, of course, more alpine climbing and bike racing), but he’ll likely be at Revelate for awhile.

“Sure there are days when I don’t want to be at work,” Eroh adds. “But in the end it’s a really cool feeling to see something you made being used on someone’s bike on the other side of the world.” 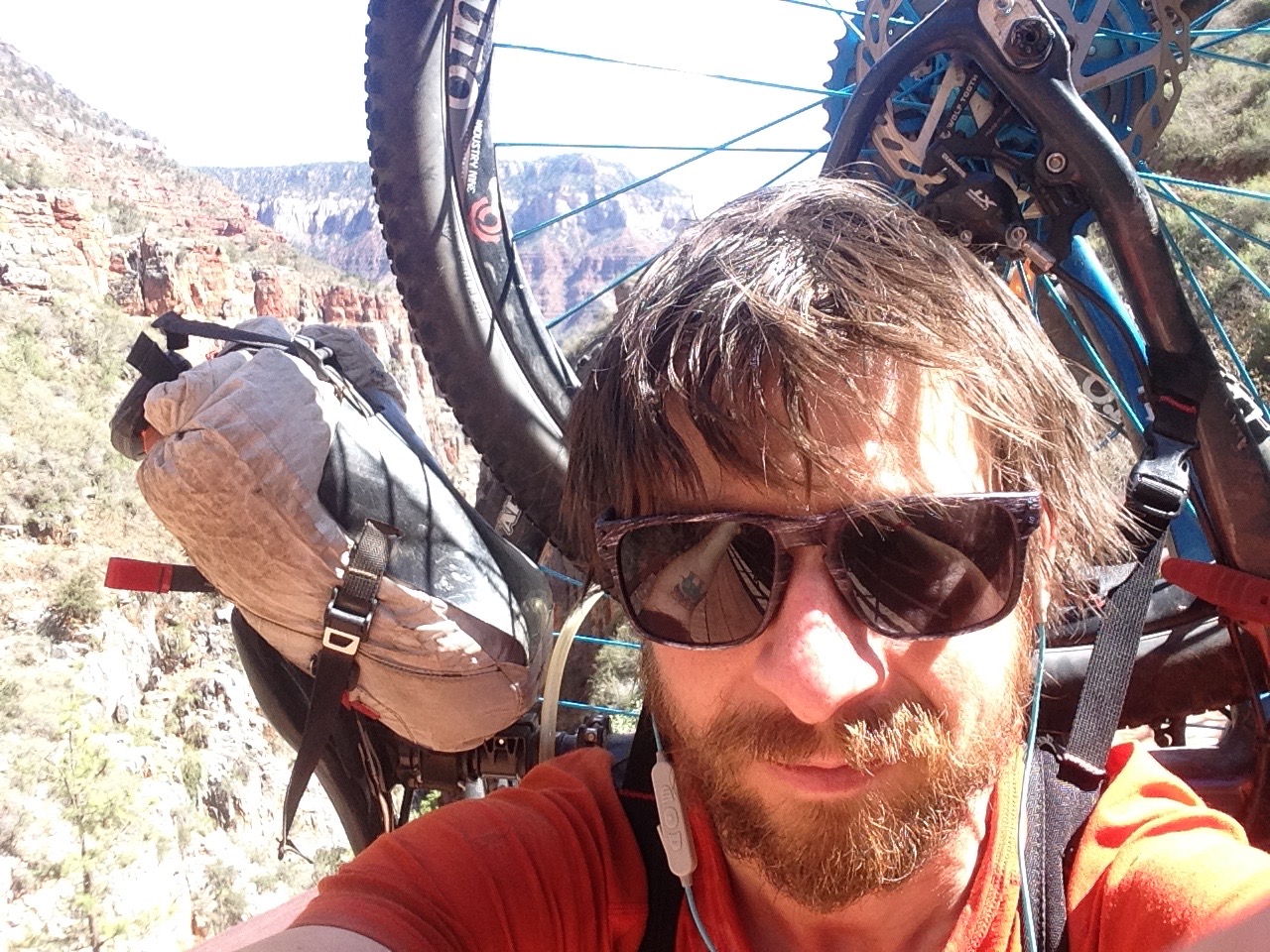 Eroh hike-a-biking on the Arizona Trail.