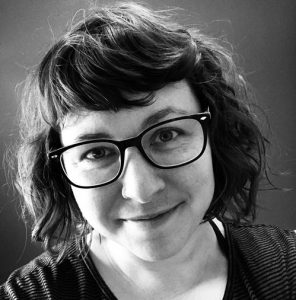 Posted by Holly in Ambassadors

After following the dots on the leader board for the last couple weeks, I was a little bit stunned to check back the night before the race and see that Lael Wilcox had taken the lead. I double and triple checked actually. It was close to the finish line and I wanted to spread the news. If you’ve been following this race, you know that above and beyond the need for speed, you need to keep a clear head and fresh batteries. GPS malfunctions and wrong turns can ruin your day. 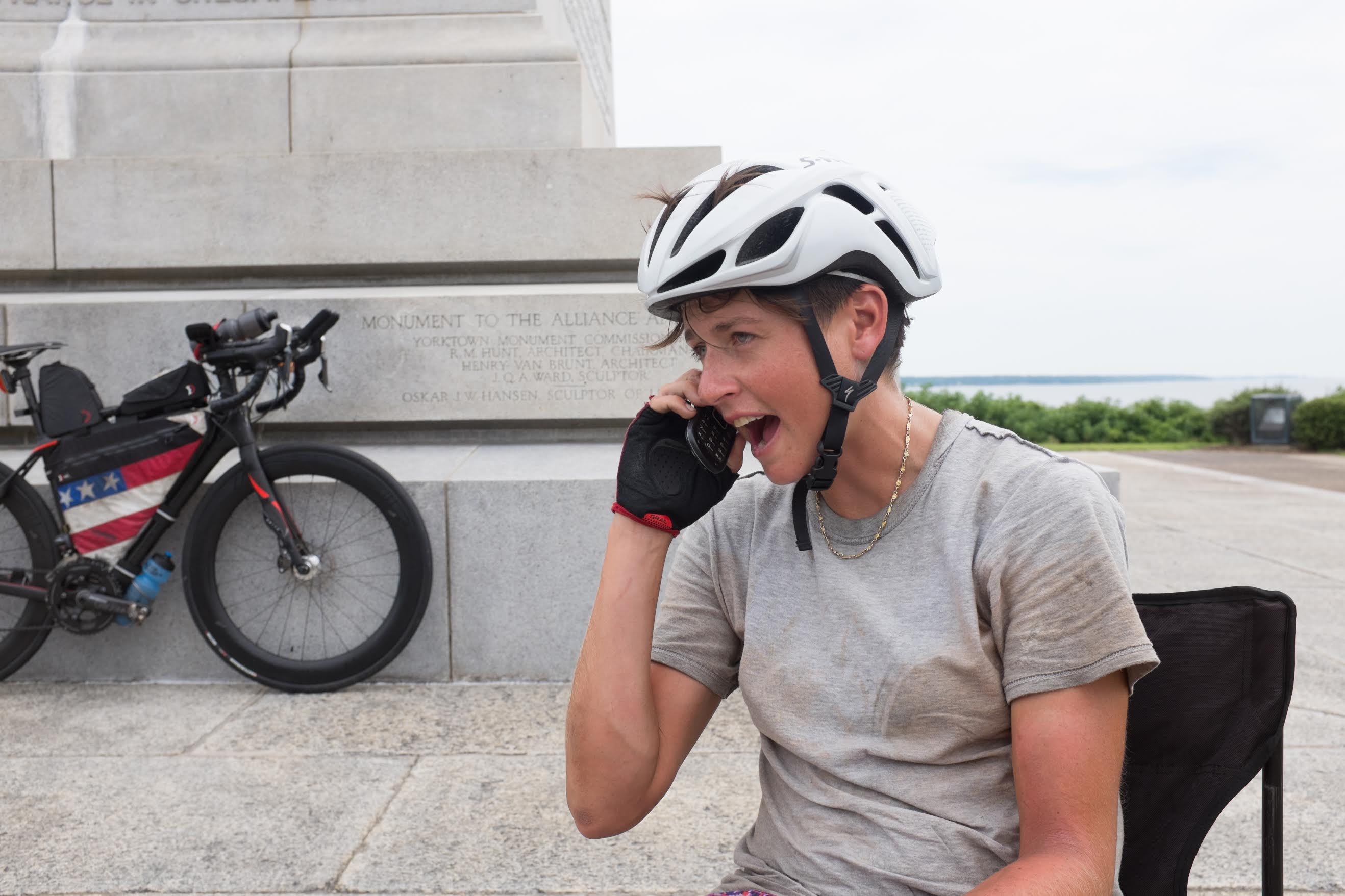 “This is Lael calling from Yorktown, VA. I DID IT!!” 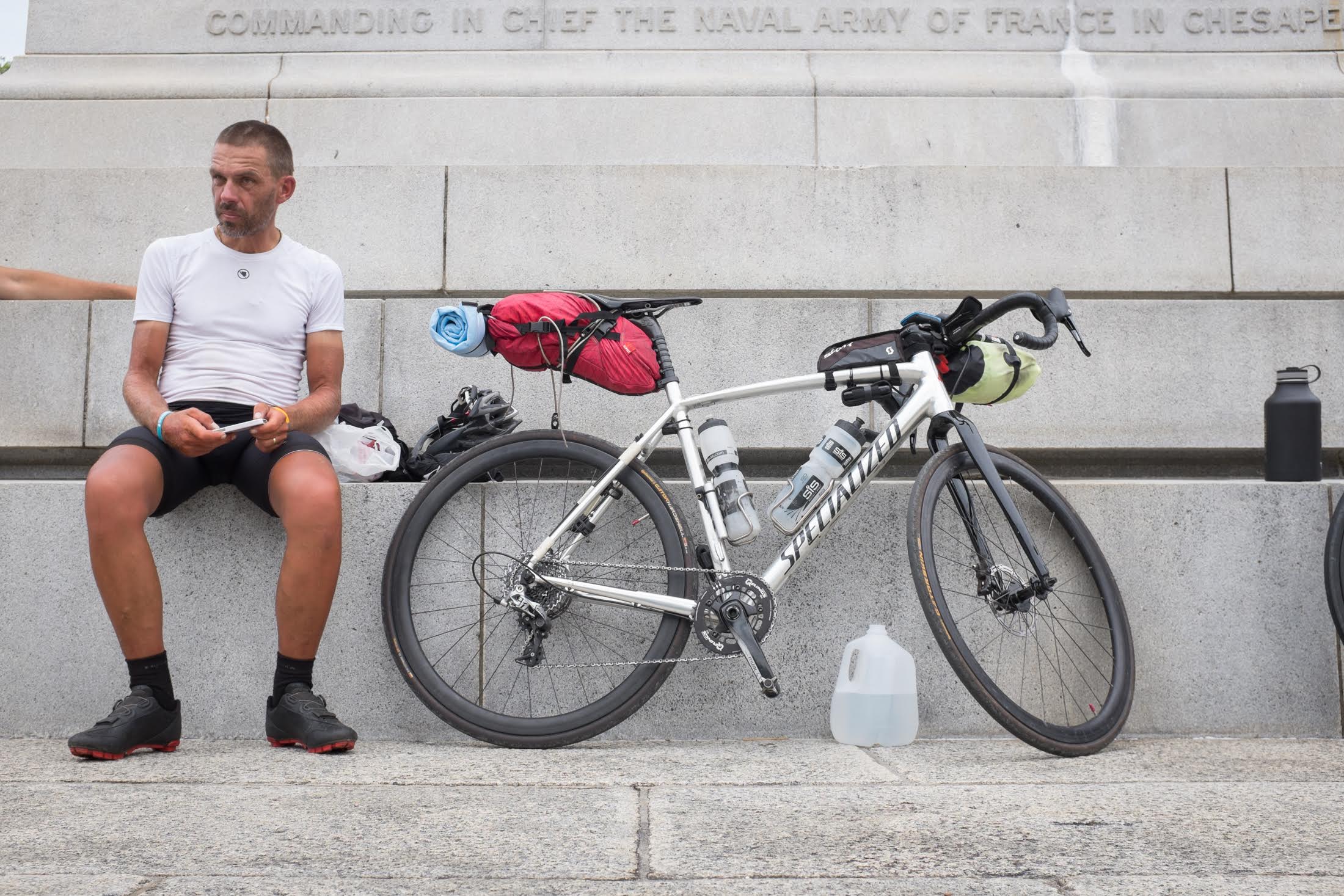 Steffan Streich looking like maybe he had a bad day, but had an impressive 18:02:18 finish time.

There is the women’s category, and the men’s category in this race. It’s not unique thinking to expect the women’s leader to come in behind at least the first man. Perhaps like the GPS systems, we need to reprogram our thinking. Lael beat everyone. She now holds the second fastest race time in history. Lael’s finish time shaves nearly 3 days off of the previous women’s record holder, Juliana Buhring, who finished in 20 days and 23 hours in 2014. 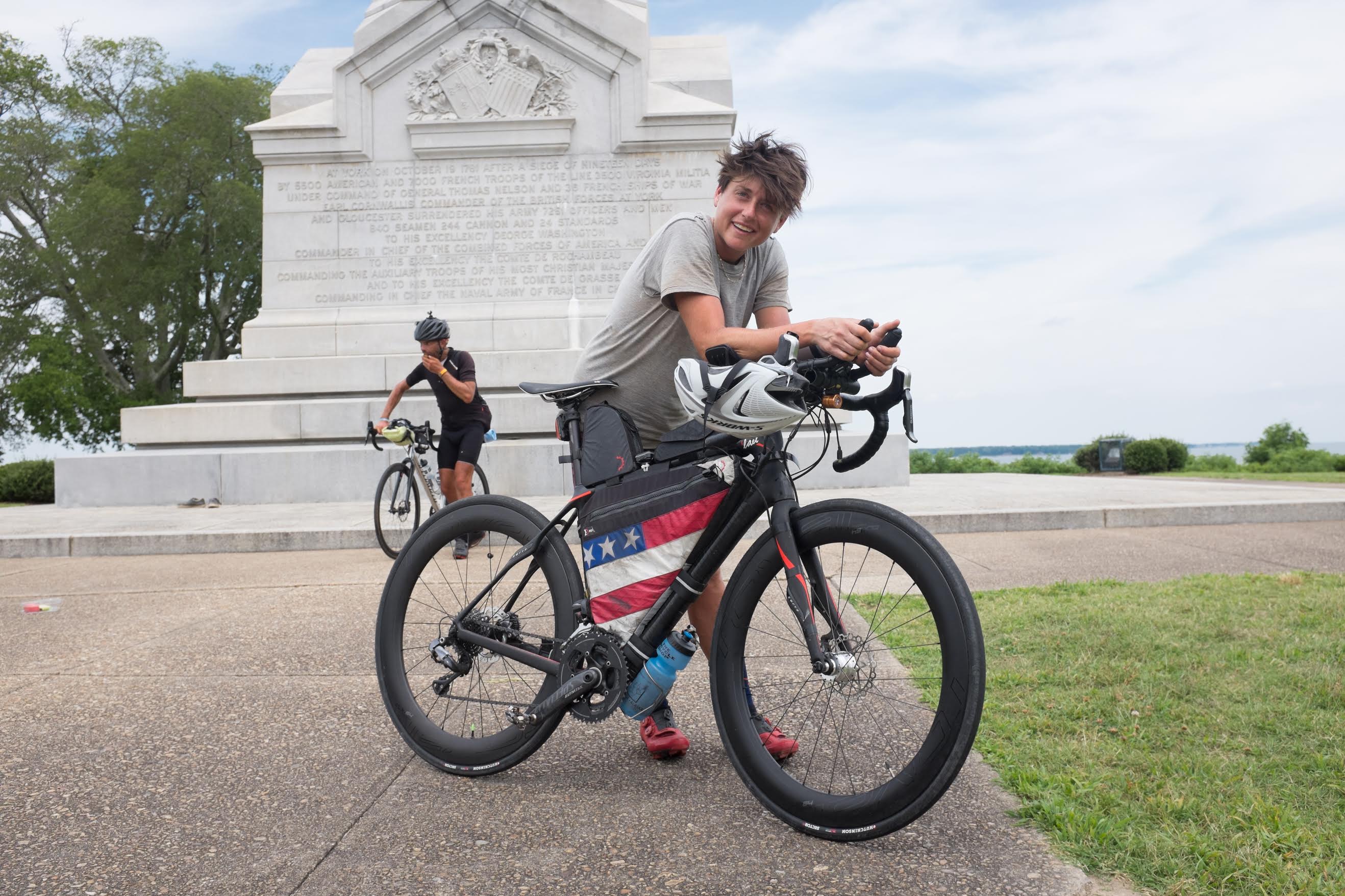 To ride 230+ miles a day, you need to consume a lot of food and water. Nearly 10,000 calories. Just to give you an idea, that is like eating:
10 string cheese
10 bags of Fritos (combine with string cheese for nachos)
4 half-pints of chocolate milk
10 cheese danishes
3 gas station burritos
and a Big Gulp of Mountain Dew. 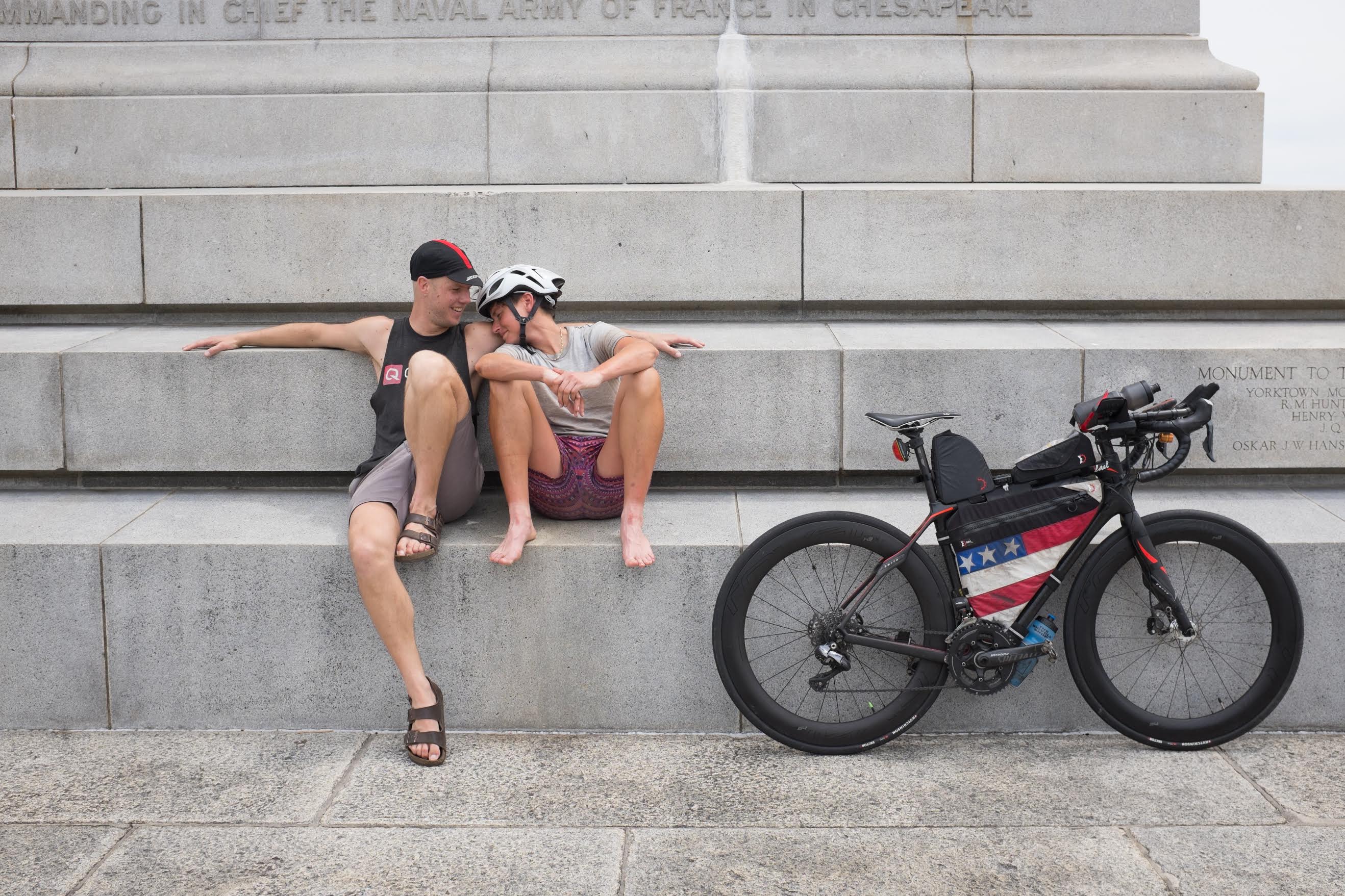 Nicholas and Lael at the finish. Lael is over the moon that she doesn’t have a mouth full of Fritos.

Lael’s next move is to pedal to upstate NY for some family time. After that, the celebration continues in Missoula, MT for the Trans Am Anniversary party later this summer. We are all eagerly awaiting her next move, perhaps the RAAM? Or something bigger.. 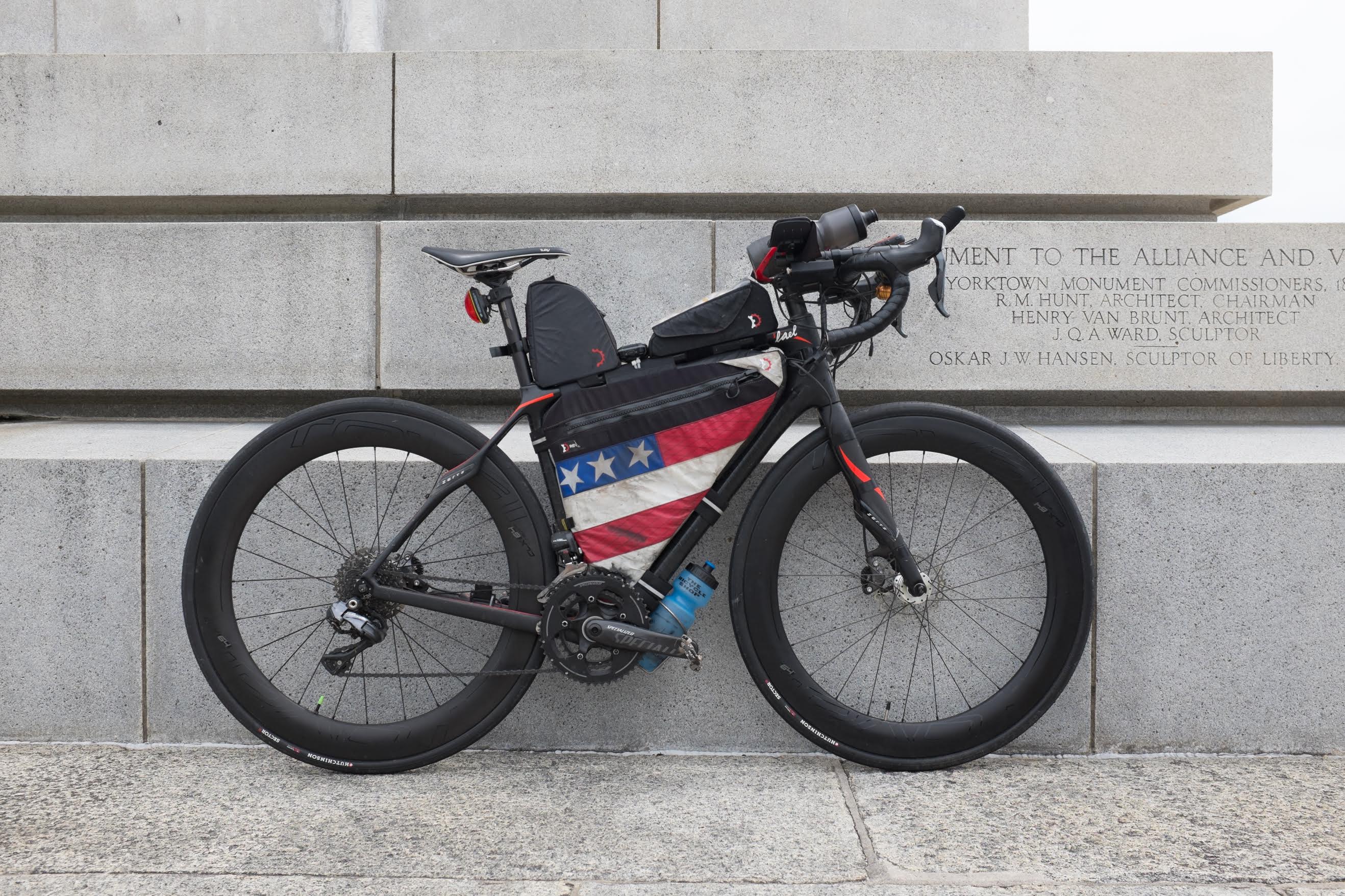 Thanks to Nicholas Carman for these photos. You can check out a more detailed account of the race finish at his blog Gypsy by Trade.  Thanks to Nathan Jones for organizing the race and Anthony Dryer for the photos along the way. Also, congrats to Evan Deutsch who pedaled alongside of Lael most of the race and finished third in 18:07:44, well done!