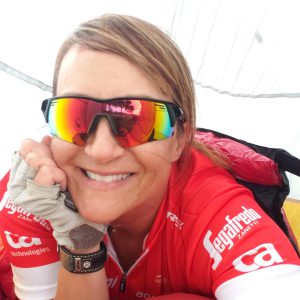 This Way to Antelope Wells

Posted by Bonnie Gagnon in BikepackHER

I am not a gifted athlete. I haven’t trained all my life, nor won any notable races. In fact, I wasn’t even supposed to be alive at this very moment, having been diagnosed with an advanced case of Lemierre’s Syndrome in 2010, barely surviving the ambush by the disease’s bacteria and living with the residual effects of the illness.

Take a moment to think about whatever it is you’ve been dreaming of doing – climbing that mountain, running that trail, paddling down that endless river or biking across those mountain tops. Then ask yourself, ‘Am I determined? When things go wrong and not how I imagined, which they will, will I throw in the towel?’ What are you willing to sacrifice; what are you willing to overcome, to make your dreams your realities? The answers are not found in the dreaming, in the planning or even in the starting. The real answers are found in the doing, in the journey itself, and it is there that we write the story of our life.

In 2016 I had no idea what I was getting myself into, and I knew it. It was the typical frigid January in Minnesota with two feet of snow blanketing the ground and fluffy, white flakes falling endlessly from the darkened sky.  From across the street, my neighbors Christmas lights cast red, green, yellow and orange upon the flawless snow that was quickly piling up in their driveway. I was sitting on my couch, dressed like summer in a t-shirt and shorts, staring into the luminescence of my laptop, clicking through dozens and dozens of pictures of bikes and gear. The voices of  Matthew Lee and other riders emitted from my television, filling the air with their struggles and experiences as the Ride the Divide documentary played for the fifth time in a row. I nearly had the dialogue memorized. I leaned back and closed my eyes, visualizing being out in some remote forest, riding my bike over the Rocky Mountains. I had never bikepacked before. I was barely familiar with what the term bikepacking even meant – something about carrying a sleeping bag, a tent or bivy (What in the world was a bivy anyway?), some food and water, but that was about the extent of it. I had a lot to learn.

Prior to the Tour Divide, I hadn’t been sure of precisely where Montana was. I knew it was on the northern border of the US, but it had been a few decades since I passed my high school geography test, and I couldn’t name its neighboring states straight off the top of my head. I hadn’t experienced the lustrous rolling hills that gave off the appearance of being crafted together from the highest quality velvet; the green hues incredible to behold.  I had never been immersed in the endless mountains that were thick with aromatic pines, and sprinkled with hidden lakes that brilliantly sparkled when the sun touched their surfaces, offering crystal clear views of fallen trees and rocks the fish eloquently maneuvered around in their underwater paradise. At the moment, I was coaxing my tired legs through countless revolutions as I slowly pedaled my way down a remote dirt road that cut straight through a thick forest of towering trees that had spent a lifetime growing into green giants. Sweat crept out from under my helmet and raced down my forehead straight into my left eye, its saltiness stinging as it came to rest. The sounds of dirt crunching and popping rose melodiously from below my tires as the wind rushed through the boughs of the towering trees above me, mingling together like a chord that only nature knew the notes to. I loved it out here.

A discord arose from behind, growing louder as it quickly approached. I hugged the right side of the dirt trail and glanced back. An old blue Chevy sedan eased up alongside me, matching my pace. As the passenger window rolled down, the two front seat occupants leaned towards the right. “Oh my gosh! You look so pro!” the woman in the passenger seat shouted at me. I couldn’t help but laugh out loud.

“Me?! I barely know what I’m doing! But thank you so much for the kind words” I said, smiling back at her.

“Where are you headed to?” the driver asked.

“Mexico?!” both women exclaimed in unison.

Every time I uttered those words, I could barely believe it myself.

“Yep! I started in Banff, Canada and I finish in Antelope Well.”

“That’s amazing!” the passenger smiled back. “Have you been doing this all your life? I could never do that!”

“Not at all. I just started bikepacking a couple of months ago. Trust me – you can do anything you put your mind to.” I said, believing it myself.

Eventually they continued on their journey, dust swirling up from behind their car as they made their way down the dusty road, around a bend and out of sight.

I thought about the looks on their faces and the excitement in their voices. I hoped that our brief interaction might inspire them, if even to just pull out their bicycles from their garage and ride down the street.

Off in the distance, I could see a car quickly making its way down the barren highway that cuts between the sage brush littered expanse to where the US and Mexico borders meet together in New Mexico. Heat rose from the asphalt surface, giving the car a shimmering look as the temperature finally steadied out at 118 degrees Fahrenheit. My ride to the airport was approaching. Directly behind me, just in front of the chain link fence that separates each country’s land, a large sign declared the location. ‘Welcome to Antelope Wells’. Through falling snow and freezing temperatures in the Canadian portion, up and over the Continental Divide thirty two times, as I zigzagged my way through Montana, Idaho, Wyoming, Colorado, and eventually New Mexico, I had completed the Tour Divide race. Now I stood in the place I had imagined countless times, holding my bike next to me for a finish line photo. It was hypnagogic.

This year, as I completed my second Tour Divide, immeasurable joy welled up inside me and tears immediately began rolling down my cheeks as soon as the Antelope Wells sign, back lit by the beautiful landscape and morning hues, came into view. I was literally speechless! I still get tears in my eyes just thinking about that day.

As I rolled up to the finish in 2016 I did not feel a lot of the emotions I had expected to experience. I was so incredibly glad to be done and had an overwhelming feeling of gratitude and sense of accomplishment. Both races were very different one from the other – in part because the weather is fickle. I experienced the full gamut of weather during both races, but in different sections on the course. In ‘16 it was very cold and snowing in Canada over the last mountain pass prior to the US border but was warm and dry throughout Colorado. This year it was warm and dry over the last mountain pass in Canada, but I found myself pushing my bike through deep snow and mud in portions of Colorado. In fact, the weather was so harsh in one portion of Colorado as we all made our approach that it forced a few of the race leaders backwards on the course and had a dynamic effect on the outcome of the race.

Having some familiarity with the course route helped boost my confidence in successfully navigating this year. It’s such a long route so it was nice to recognize places and recall resupply stops, which helps in time management. This year I was also able to avoid the beautiful, fast descent down the backside of Boreas Pass and instead take the inconspicuous right turn onto the Gold Rush trail. I had missed that turn in ‘16 and found myself backtracking as I climbed back up to the top, laughing at myself for not paying closer attention. Being a bit familiar with the course also added to my overall enjoyment.

Both finishes will always be incredibly dear to my heart and I hope that in sharing those experiences with my family, friends and anyone who might be interested in listening, I might be able to convey my story in such a way that they feel encouraged or inspired to go out and do whatever it is that sets their hearts on fire.

I have been asked many times how I did it and to be honest I can’t say it was because I was well trained, in great shape or anything to do with physical fitness. The credit lies within the heart and the mind. Excitement, motivation and strength can get us to any start line and in many ways, that’s the easy part. It is the grit, the determination that no matter what comes our way we will find a way to overcome it, that gets us to the finish line.

Each one of us is an author. Each one of us has the gift of writing a story that has never been written, told, nor even imagined. We can choose to be passive writers, spectators in life, writing nearly as an afterthought, or we can write with intention – penning the purpose that shapes our lives, and choosing our future. I choose to write with a purpose. You can follow my bike adventures @loves_to_mtnbike. I am currently working on a book, “Taking Down the Giant,” about my experiences on the Tour Divide and hope that it inspires even one person do step out and do whatever it is that they set their hearts upon.