“Dirt hut on Wakhan Afgan border: Had another bad sick night, shit the bed. Spent a long nice morning cleaning up doing laundry and napping. It’s worth mentioning that I received some very bad news over my InReach device. Just days earlier, extremists killed four foreign riders near the capital, in a rare and very brazen attack on the road. I’d be lying if I said this is not affecting me. But as I continue my ride through the country I continually meet with smiles and gracious hosts. These positive interactions with all the Tajiks I meet along the way are quickly washing away my fears of being alone on the road.” ~Steve Fassbinder, Journal Entry, August 2018 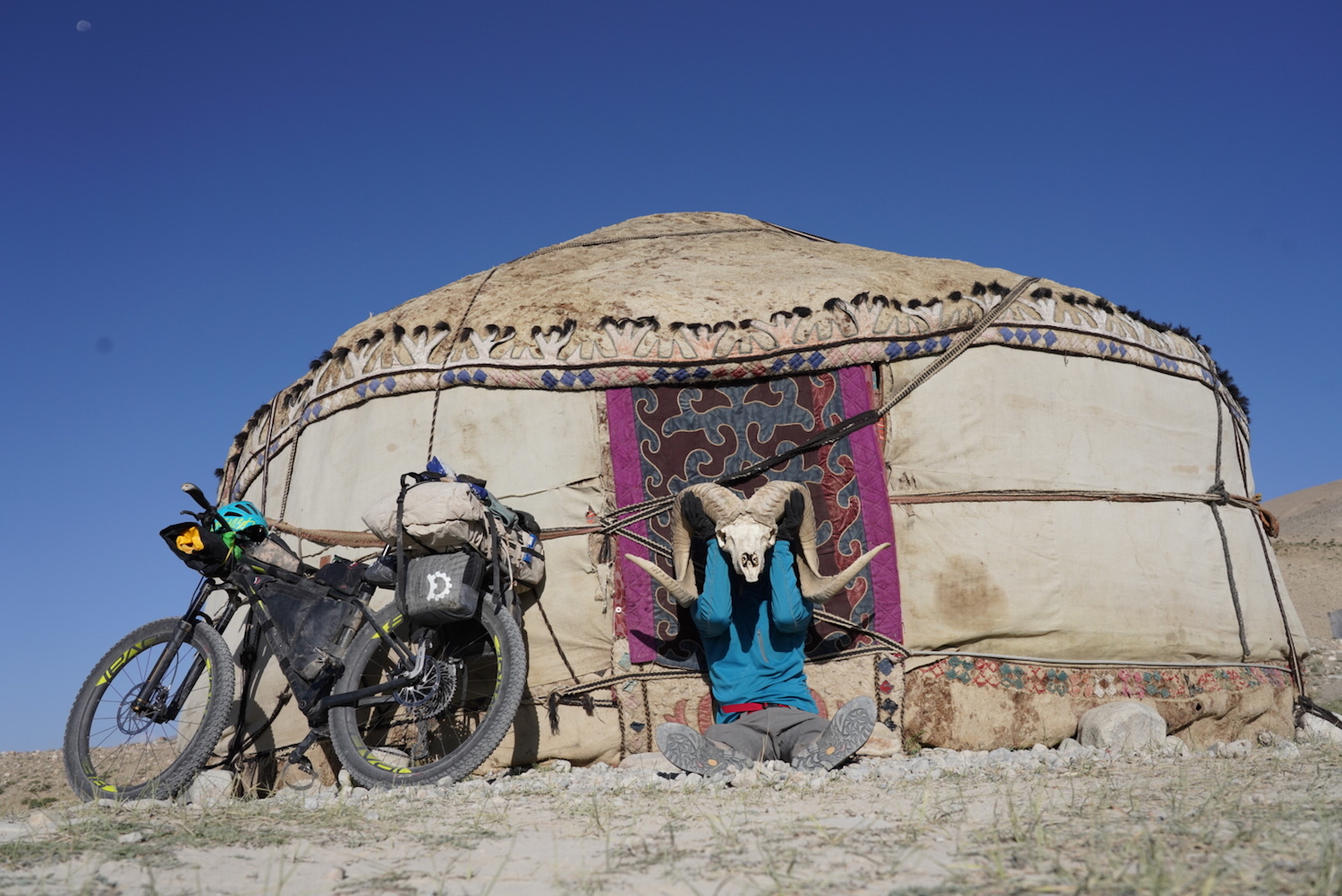 “Tajikawhere?” My father asked when I told him I’d be traveling alone through Tajikistan by bicycle.

Answering this question was part geography lesson for myself and part Dad deciding that this was “next level crazy.” I could hardly blame him for his reaction, as the bordering countries aren’t exactly tourist destinations.

This, in addition to my choice of “alone by bike,” seemed insane to a person like my dad who prefers putting greens and shiny sports cars to dusty abandoned roads on the Afghan border. Perhaps this was a case of the fruit rolling away from the tree, by bicycle of course.

“Pshart Valley: Woke in the yurt after good sleep. Pushed and rode up to the pass under light rain. Descended and found a great leaning boulder to wait out the storm. Super pretty out. Long, fast DH into narrowing canyon. Passed two yurts on the other side of the pass, along with one dirt cabin in a tight gorge. Surprisingly good track past the narrows.

Took the high left side several times as the track deteriorated or crossed too big a river. The canyon narrowed dramatically, and the bush whacking and alternative goat paths were more than I wanted to push through for an out and back ride, so I turned back seven miles from Chat Tackat. Riding back was not too bad, and I made great time to the big limestone boulders. It was threatening rain, and I once again used them for a good shelter.” 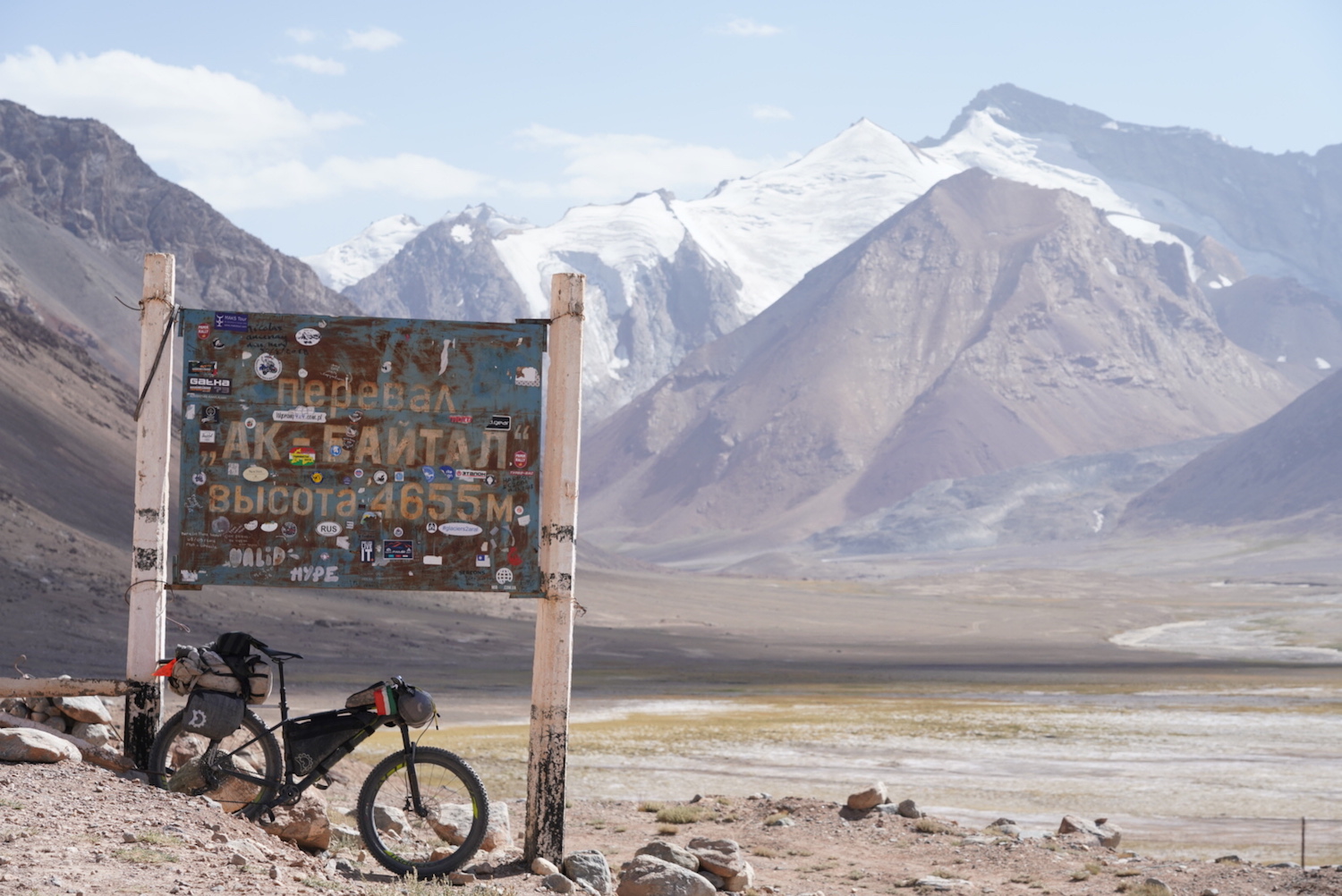 The Roof of the World

Summer 2017, I visited Northern Pakistan for a slightly insane glacier riding mission that delivered deeply satisfying cultural and mountain experiences, but fell a bit short in the riding to hike-a-bike ratio. But travelling in Pakistan offered me a first glimpse into central Asian countries, and I knew almost immediately that I wanted to come back with a longer bike mission in mind.

Although a relatively new country formed in the wake of the former USSR, Tajikistan has a long history as an essential part of the Silk Road that connects Central Asia to Europe. This densely mountainous country is home to the Pamir Range, translated as “the roof of the world.” It lies at the junction of the Himalaya, Tian Shan, Karakoram, Hindu Kush, and Hindu Raj ranges. Afghanistan borders it to the south, China to the east, Kyrgyzstan to the north, and Uzbekistan to the west, and it’s just ten miles from Pakistan, separated only by a sliver of land known as the Wahkan Corridor.

“Alichur River: Today was perfect. I slept poorly and woke up early, had a short breakfast with the three cyclists from last night. Stashed some extra gear at the homestay and set off down river. Found a good put-in 20 minutes downriver on the left bank. Plenty of clear bluish water, and the boating was great for hours, with mellow flows, but just fast enough to make some miles.

I took out just past the narrows, as the river opened up toward the lake. Easy riding on the right bank. Passed one place with people. There was an old lady giving and equally old, soapy guy a shower. No tea. Four military trucks pulled up on the opposite bank as I was crossing back over in my boat. Just young dudes out to haul in the fish from nets at the mouth of the river. The main dude wanted selfies with me, and we had to redo several times because his camera guy sucked! Found a great camp back on the Alichur River. Tired!”

I’m not sure what draws me to these far-off lands, but more and more I find myself seeking the solace they provide. During my month-long trip through the heart of the Pamirs, I noticed several things that were missing from our everyday Western reality: I didn’t see a single plane in the sky for 24 continuous days, or contrails, or blinking lights in the clear night sky, or the constant drone of their engines overhead. WIFI… none for three weeks. Think about that……

“Istyk River: Simply an amazing day of wild scenic paddling at 13,000 feet. I started after a three-hour ride to the spot where I put in just past Chestembe. To be honest, I wasn’t sure if this was going to be a good idea as there were about 15 miles of unknown paddling ahead and there were two separate narrow zones that concerned me. But I came here for this, and all my past river experience told me that 25 feet per mile should be fine with low flows. The day just kept getting better the farther into the canyon I progressed. There were big-ass Marco Polo Sheep skulls everywhere, even in the river. The view around every bend got bigger and deeper, and the light at about 4p.m. went off the charts! I paddled till 5p.m. and took a bath and did laundry in the last of the sunlight waiting for food to cook and cloths to dry.”

In the 1000+ miles I covered, I had not a single negative interaction with motorists. Although there were plenty of bad drivers, I never once feared for my life as I would covering the same distance in any western country. People on bikes command the respect they deserve.

The riding part of my trip started in Khorog after several flights and a crushing 14-hour jeep shuttle. I had eight days of food packed, a good paper map, a tiny packraft, and about 24 days to explore the country. I planned to do a loop of sorts, with several out and backs into remote valleys and hopefully some river exploration on the way.

“Khafrazdara Valley: Mellow cool morning at the lake. Had milk and Chai Chai with the Shepard again. Very chill there. I like that guy with the Gilligan hat and binoculars. Slow walking out across the dry hot benches to the shady river. Took a long cool break at the giant couch rock (best spot). Slow walking down. Had tea with the hydro plant worker, then big dinner at Ozod’s. Played with the local kids at dusk, handstands!!! Along the way I stayed in a yurt with some traditional Kyrgyz and decided that yurts are nice, but way too hot for summer time sleeping.” 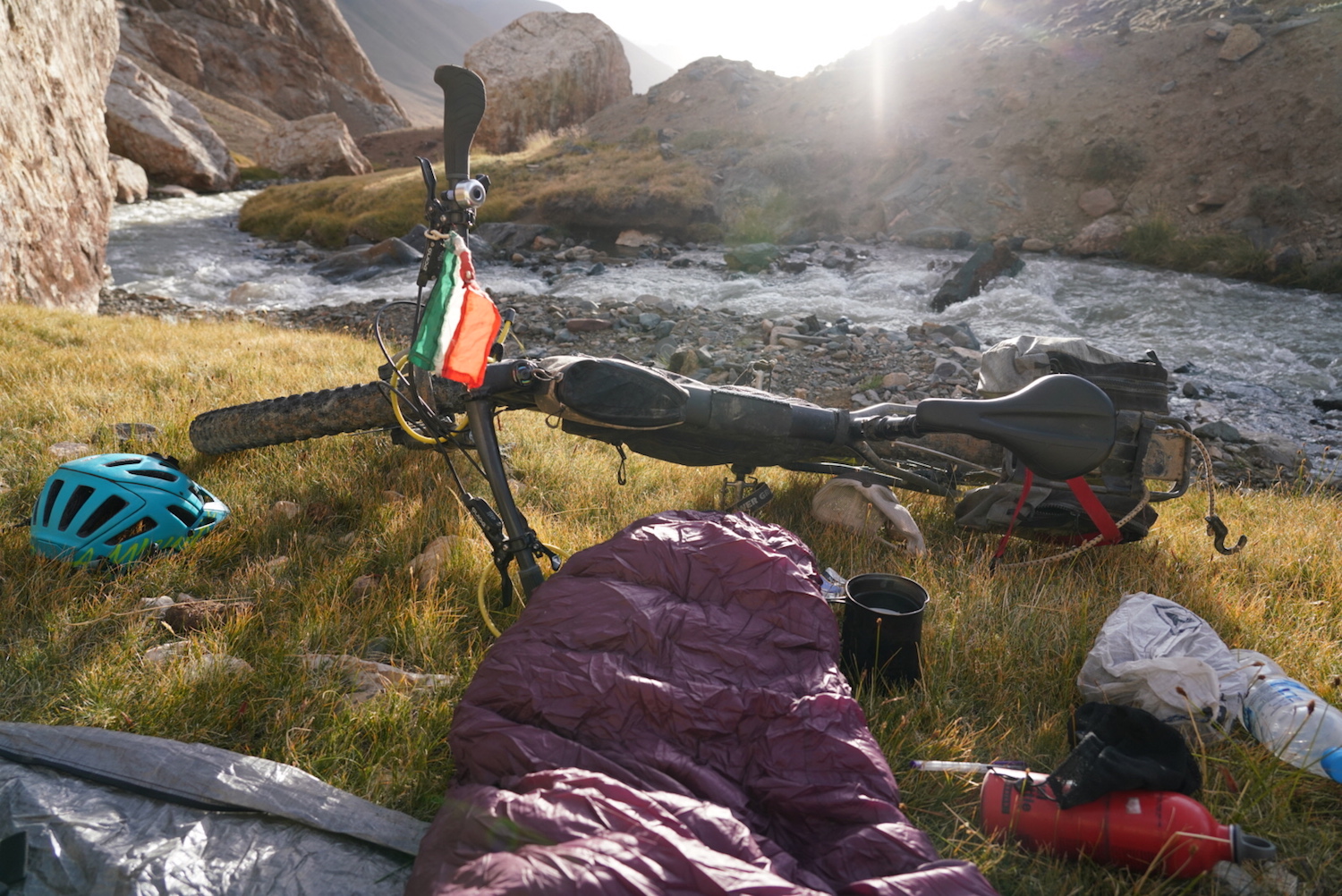 After a nice stay in Marghob and with fresh supplies of sardines and cholates, I headed up to Akbital pass the highest point on the silk road at 4655 meters. Shortly after this pass is a non-descript left hand turn that will take you back toward the Pange River via the Bartang Valley. This turn marked the beginning of my week long exit from the high reaches of the eastern Pamir as I made my way back once again to the Afgan border to finish my trip in Qali Hkumb.

During my travels I’d been constantly hearing about the Bartang Valley from fellow tourist and locals alike, and I was really looking forward to the lush fruit-bearing valley ahead, and also to seeing a few of the very remote side valleys that come in from the highest reaches of the Wester Pamir. One such valley was the Khafrazdara; I spent two and a half days hiking (without the bike) up to a high pass that overlooks the massive glacial terrain surrounding Istiquil Peak at 6940 meters.

“Ruahan: Nice quiet morning riding down the Bartang Valley. Warm again but not too bad. Met up with four rad guys, and we spent the afternoon riding to Rushan together. Jonathan, Rulan, Taji, and Nick. We drank cold beers at a Maguzin for hours and found a great yard and hosts that treated us to dinner and breakfast. I got up early and said my goodbyes. Hope to see them in Dushanbe in a few days.”

I couldn’t have asked for a better group of fellow cyclists to run into on my last days in Tajikistan. These kids (all in their 20’s) had started out from three different locations, but had found each other on the road and banded together over the past month of riding in both Kyrgyzstan and Tajikistan. Although my trip was meant to be a soul-searching solo mission, and at times it was, it was the people that I met along the way that set the stage for what my trip ultimately became.

Photos & story by Steve “Doom” Fassbinder. Doom’s experiences in Tajikistan were documented in the first issue of the Bikepacking Journal, for which he received a 2018 Bikepacking Award for his photography. You can follow his adventures on Instagram @RepublicofDoom. 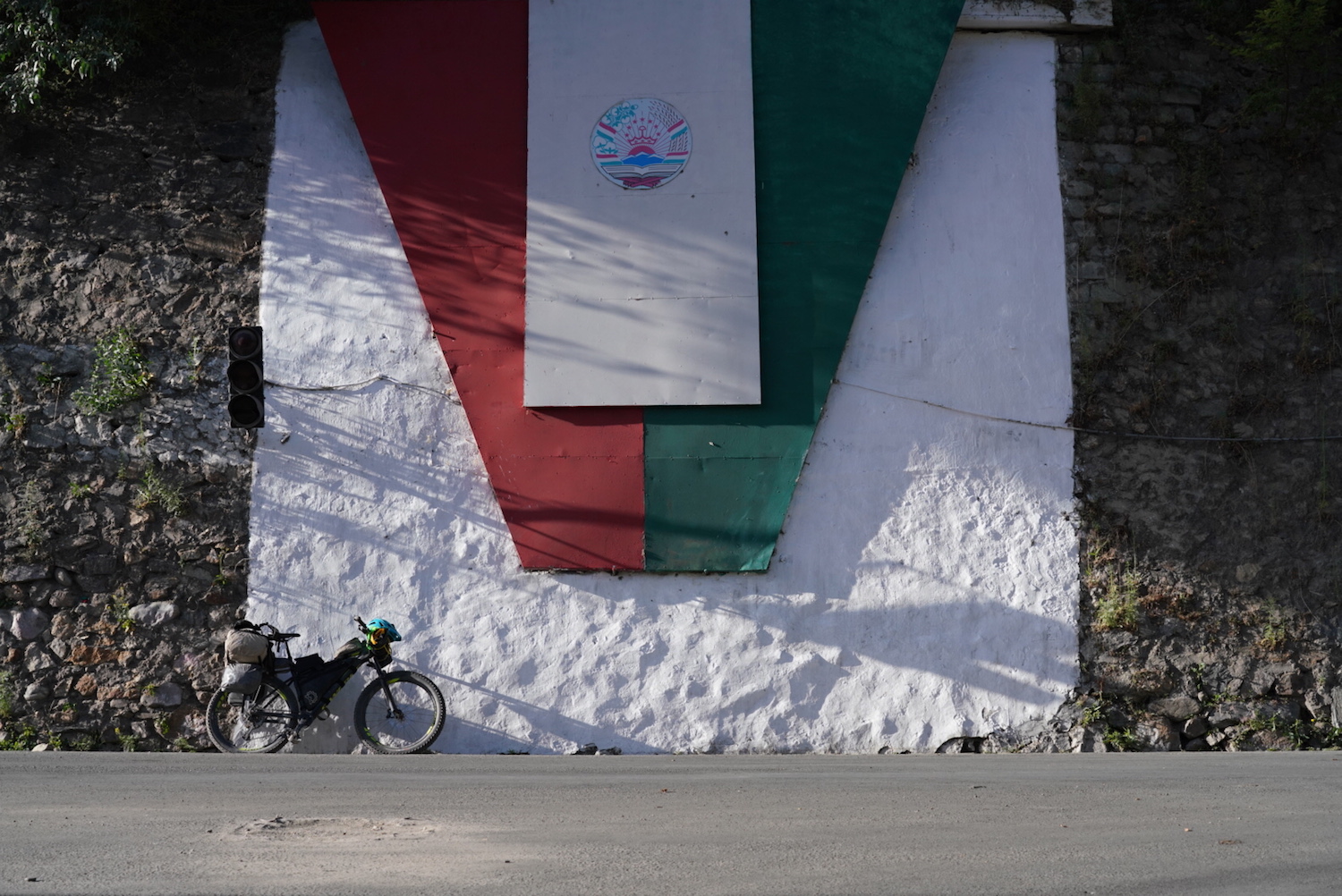