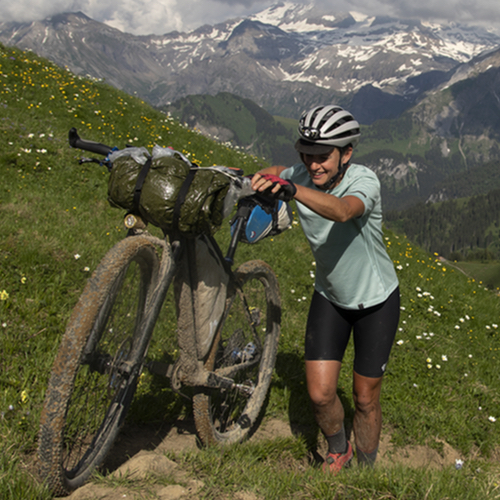 Riding out of Bahia Los Angeles, under the sun with a tailwind, Nick and I get in a fight because I want to run and he wants to keep moving forward. Fueled by temper, we ride fast through afternoon until we reach a crusty old car tire marked “San Rafael” with an arrow pointing to the beach.

San Rafael is a dot on our paper map. Sometimes these dots are pueblitos, sometimes single family ranches, sometimes mission ruins and sometimes just plain ruined. You never know what you’re going to find in Baja. Tracing lines on a map is much different than riding them. Roads are good. Weather is good. Our biggest challenge here is water. Baja is a desert. We’re always looking for people because if you find people, you find water. They need it as much as we do. 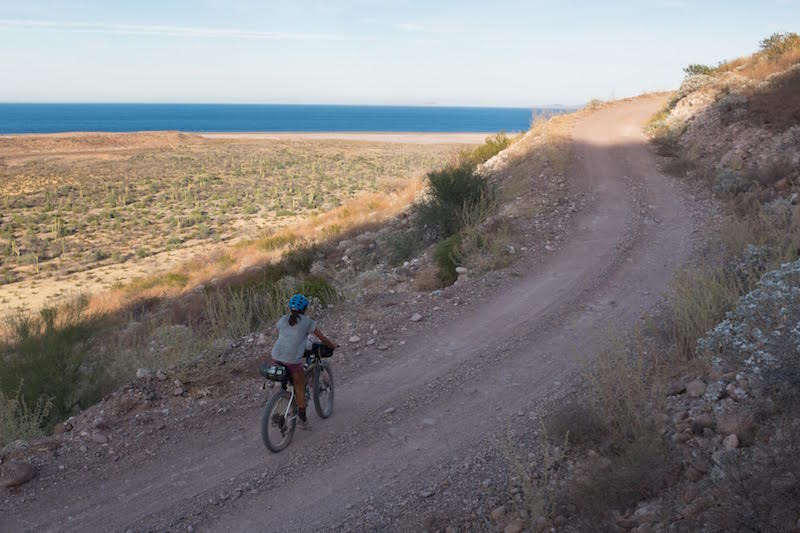 We turn off to San Rafael. Just above the beach, there are a few shacks and a trailer. A sign up front says “beer and camping”. A dog barks. I knock on the door of the trailer. There’s tv noise and then it’s quiet. Thin and older, a man opens the door. He doesn’t fill out his jeans, but he wears big boots. It’s Pancho. He welcomes us like unexpected friends and we follow him to the shack next door.

Once inside, Pancho sets a pot to boil on the propane stove.

I shrug towards Nick and he shrugs back.

The water is hot. Pancho sets out nescafe and sugar, and as an afterthought, powdered creamer. I stir in coffee and warm my hands around the cup.

Pancho seats us at his table. He’d also like to invite us to a fish taco. I decline– we have food and everything we need. He insists and I agree.

frijoles. He refries the fish on the griddle, reheats the beans and apologizes because he doesn’t have any tortillas. 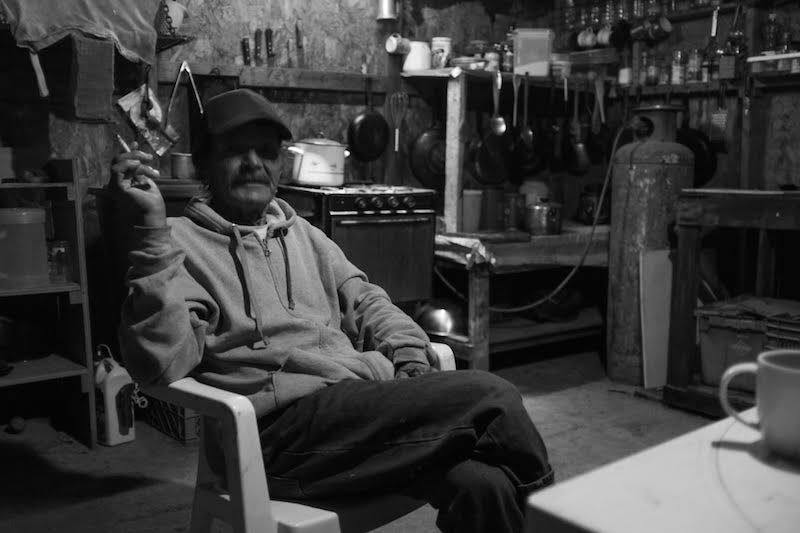 We eat and talk– mostly we just eat. And then we’re tired.

Pancho suggest we camp behind the shack because it would block the wind, but the best camp spot is on the beach. He’s built walls around a palapa and spread gravel over the sand. We can sleep where we please, so we head for the beach. He’s right. It’s exceptional. Should we swim? It’s chilly, but we’re dirty. We strip quick and run into the sea. The water is salty and cold and glimmers in the moonlight.

We dry off in the breeze on the walk back to the palapa, lay out our sleeping bags and fall fast asleep. 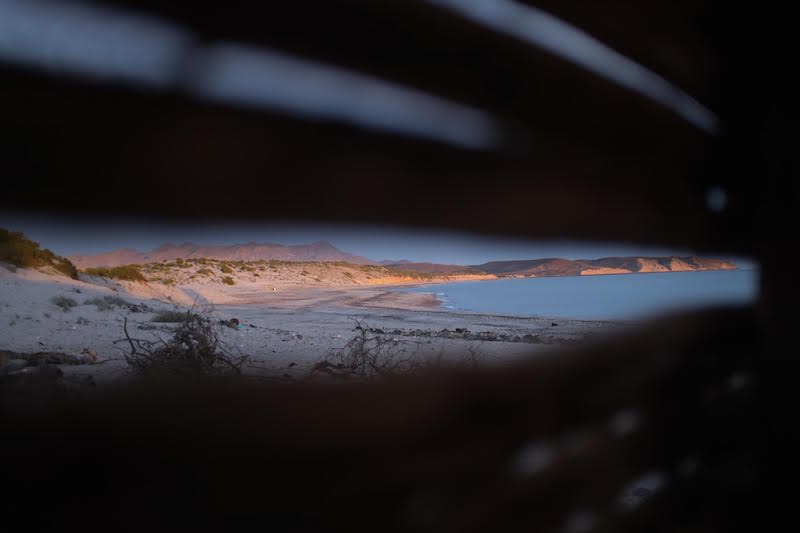 Awake before first light, I sneak out of the palapa for a run. I run a dirt road away from the beach and towards the mountains. The sun rises through clouds over the Sea of Cortez. On the way out I see five coyotes, on the way back, cows.

Back at the palapa, Nick has already packed up my sleeping bag and filled up my water bottles. This guy is too good to me. We’re ready to set out. We push our bikes back up to the shack to say bye and thanks to Pancho. 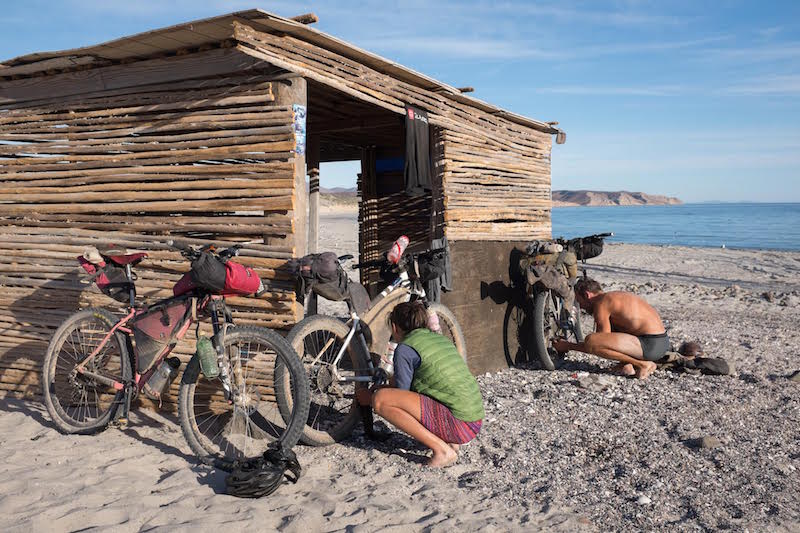 He stands at the table, rolling out flour tortillas. He spreads them on the griddle to cook– three at a time. He flips them with his fingers and stacks them in a towel once they’re cooked.

He refries the fish and reheats the beans and resets the table and we eat more fish tacos.

I ask about the cows. Why are there cows on the beach?

Oh. He shrugs, “Pancho has a ranch a kilometer away.”

“Yes, another Pancho. We’re both named Francisco, so we’re both called Pancho.”

“Oh, you’re Pancho and he’s Pancho. You catch the fish and he has the ranch.”

I make a mental note so I don’t get confused. Our Pancho is Pancho Pescado, the neighbor is Pancho Rancho.

“Yeah, Pancho (Rancho) is strange. Last time I saw him, I invited him in for coffee, but he didn’t have time for coffee. People are strange.” Pancho Pescado waves his hand in dismissal. 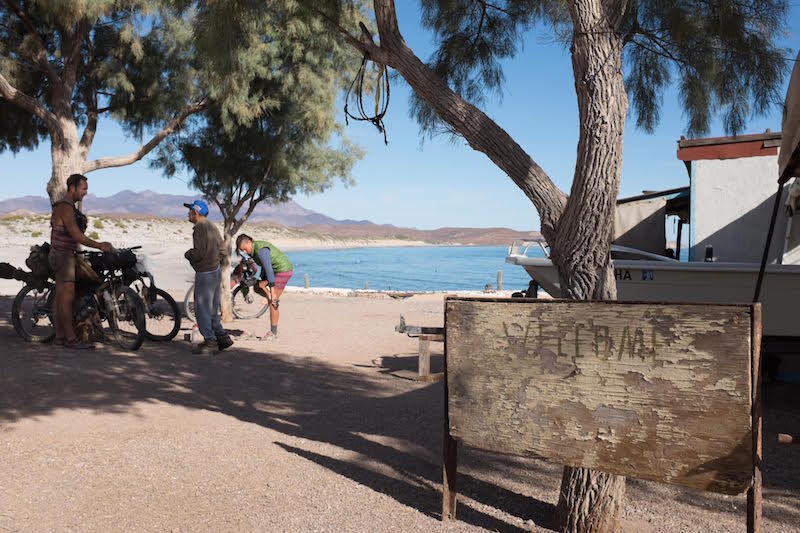 We talk about San Rafael. Pancho Pescado has lived here for 35 years. He doesn’t have a car. He has everything he needs. He has many American friends that visit him every year. They bring him water every now and then, but it rained so much in September that he trapped two big barrels of water and he’s set for months.

Then we hear an engine approach.

We sit quiet and sure enough a big barrel of a man in a cowboy hat and boots comes walking through the door, holding an empty coffee cup. His little wife limps in behind.

We all drink a cup of coffee and the Panchos shoot the shit like the best of friends. Then Pancho Pescado gives Pancho Rancho a fish taco that he eats with gusto. He gives the little wife a langosta.

She holds it for a minute and then tucks it up her sleeve for later.

We pull out the map and ask about the road to Santa Martha. 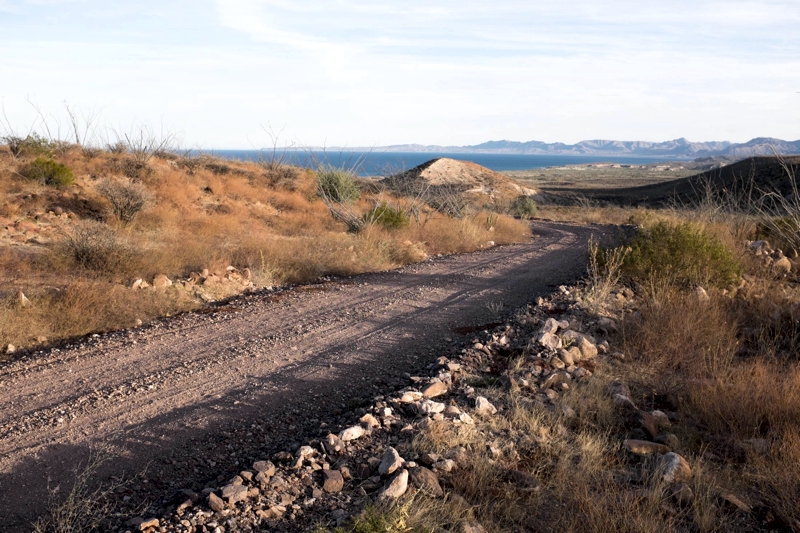 Pancho Pescado knows that motos take that route. Pancho Rancho hasn’t driven it for years and thinks it may be storm-damaged, but passable. The major challenge is water. They know of a family twenty miles down in El Progreso, and then a few houses in El Barril. We can ask along the way.

After a second cup of coffee, they walk us out to the bikes so we can get riding. On the way, Pancho Pescado points out a crack in his fishing boat. The Panchos take a minute to discuss it and then we walk to the bikes. Pancho Rancho squeezes my fat tires. The dog nips at the wife’s sleeve– where she’s still hiding the langosta. She shoos him away and he turns to my bike and pees on it. We all laugh and wave goodbye. They go back to the boat problem and we head out on our bikes. 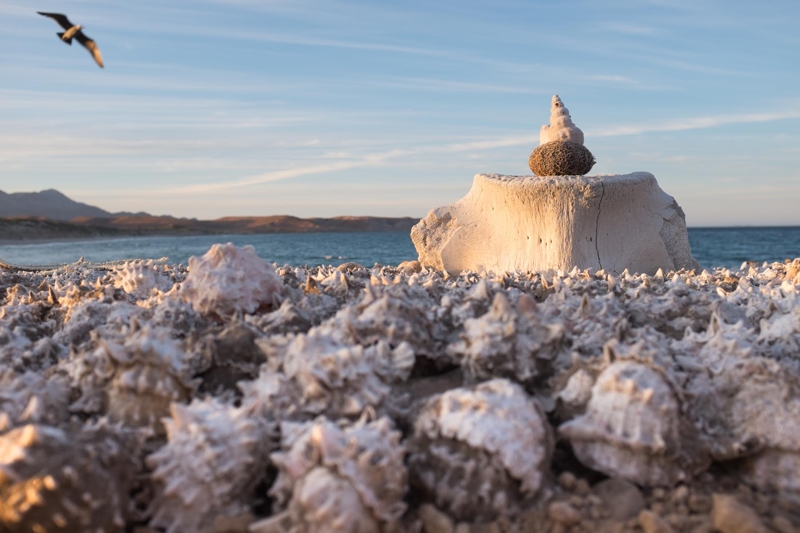 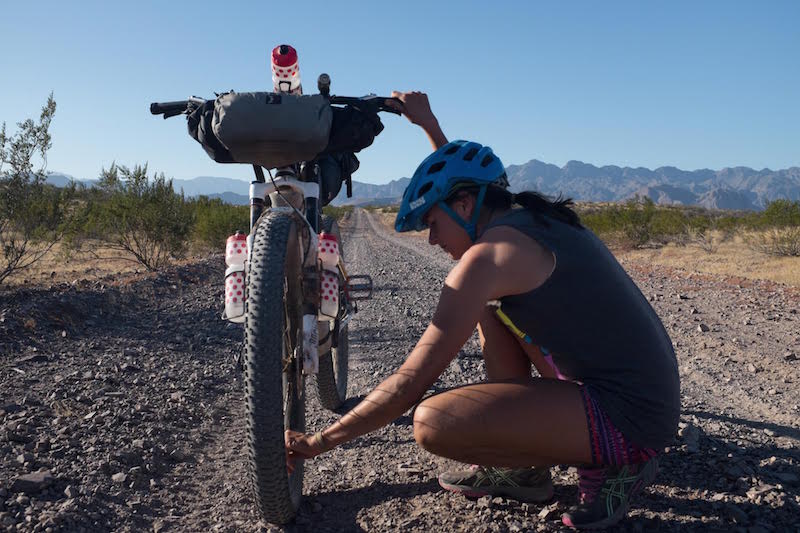 Lael is based out of Anchorage, Alaska. In 2017, she was named “Bikepacker of the year” by Bikepacking.com. She holds the women’s records in the Tour Divide and the Trans Am Bike Race and is the second woman ever to complete the grueling Navad 1000 course through the Swiss Alps. She has ridden over 100,000 miles in 35 countries and there is so much more she wants to explore. As an advocate to get more women on bikes, her current favorite project is Anchorage GRIT, a middle school girls cycling mentorship program. This summer she is racing the Tour Divide and The Silk Road Mountain Race in Kyrgyzstan. Follow her adventures at laelwilcox.com and on Instagram @laelwilcox.