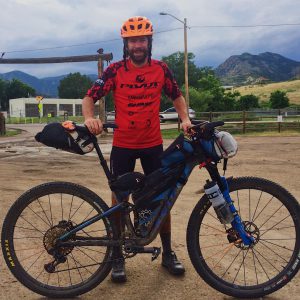 Posted by Kurt Refsnider in Ambassadors

For someone who relishes riding in the mountains, I’ve long felt a bit reticent for having never ridden more than a few miles in Nevada, the most mountainous state in the U.S. Years ago, I drove across Nevada on Highway 50, “The Loneliest Highway,” en route to a geology conference in San Francisco. That was my first time in Nevada, and I was absolutely awestruck by the scale of the Great Basin landscape – huge mountain chains, sprawling basins, an equally expansive sky, and long distances between towns. I was enamored by it all and remember doing a little research after the drive to see what mountain biking there may be along that corridor. In that bit of research, I read about the Toiyabe Crest Trail (TCT) that runs along the Toiyabe Range south of Austin. Ever since then, that trail has been on one of my mental lists of places to experience. 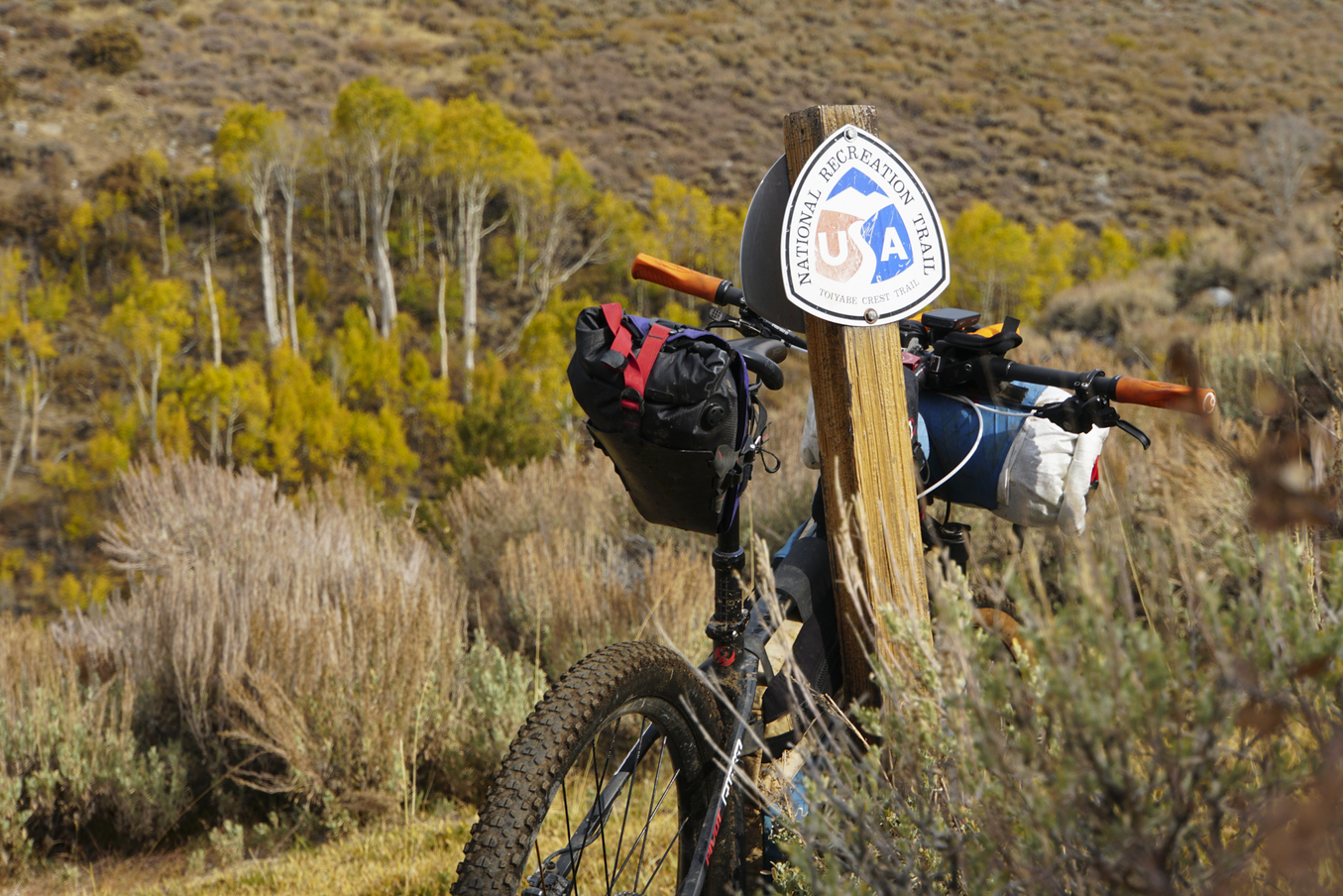 It may have taken more than a decade, but I finally got out there this fall, and it turned out that it was probably a good thing that it took so long. The TCT suffered from minimal maintenance for years, a problem that’s the reality for so many backcountry trails. But Kurt Gensheimer and a crew of volunteers have been putting in some serious work out there this past summer, repairing sections of tread and cutting back a lot of sagebrush. Kurt and I obviously share a name, but we also share a love for seldom-traveled and rugged backcountry trails. One of these days we’ll get to ride together, but it hasn’t happened yet. 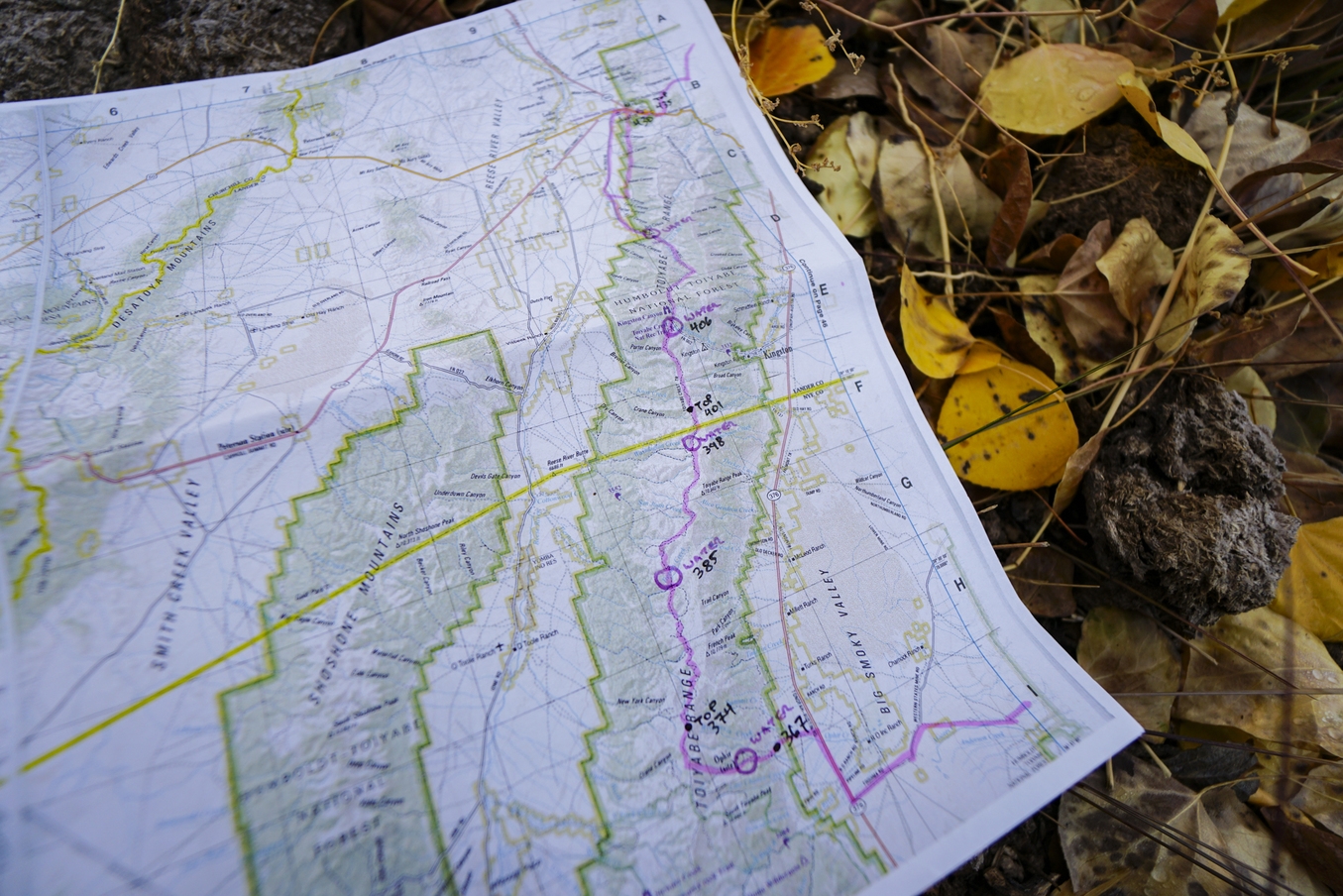 In October, I schemed up a big loop I wanted to ride in the eastern part of the Great Basin, linking together long sections of Jan Bennett’s Pony Express Bikepacking Route and the Comstock Epic race route. Conveniently, the TCT would be perfect for the north-south link at the western end of my loop! I drove out to Nevada, excited for 700 miles and 20+ mountain range crossings, but the weather had plans that weren’t quite a good match for mine. After a couple months of sunny weather, the forecaster discussion was suddenly describing high confidence in a series of four Pacific systems moving into the area, cold temperatures, and valley snow likely accompanying the last of those systems. 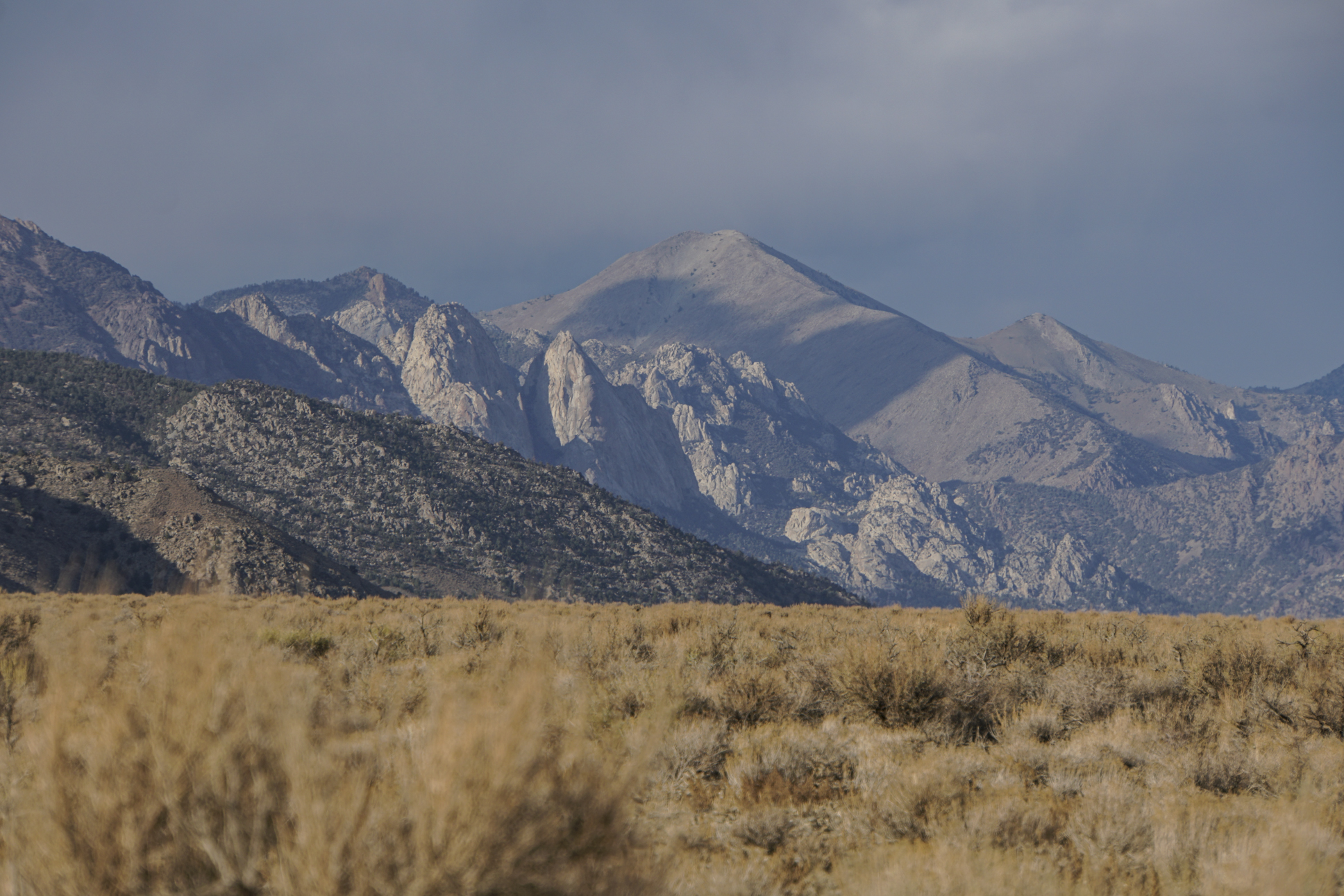 I waffled. I don’t mind bikepacking in the rain that much. Or in the cold. Or even in the snow. But I tried to let my brain be wiser than my eagerness for this particular loop. There was also the reality that long dirt roads across most every basin would be turned to sticky mud . . . or worse. So I decided to drive farther west and just spend a few days out on a shorter 300-mile version of the loop, trying to beat the last couple weather systems and still getting onto the TCT. But after 4 miles, I turned around. I just had a bad feeling that I was pushing my luck a bit too much. I don’t get gut feelings like that too often, so I paid heed, turned around, and came up with yet another plan. And then another. Finally, I drove out to the base of the Toiyabe Range to just do a loop of the TCT – up the steep Ophir Pass 4×4 track, north for the 35-miles of bike-legal TCT, and then looping back on road in the broad valley below – 70 miles instead of 700. But I was still pretty dang excited. 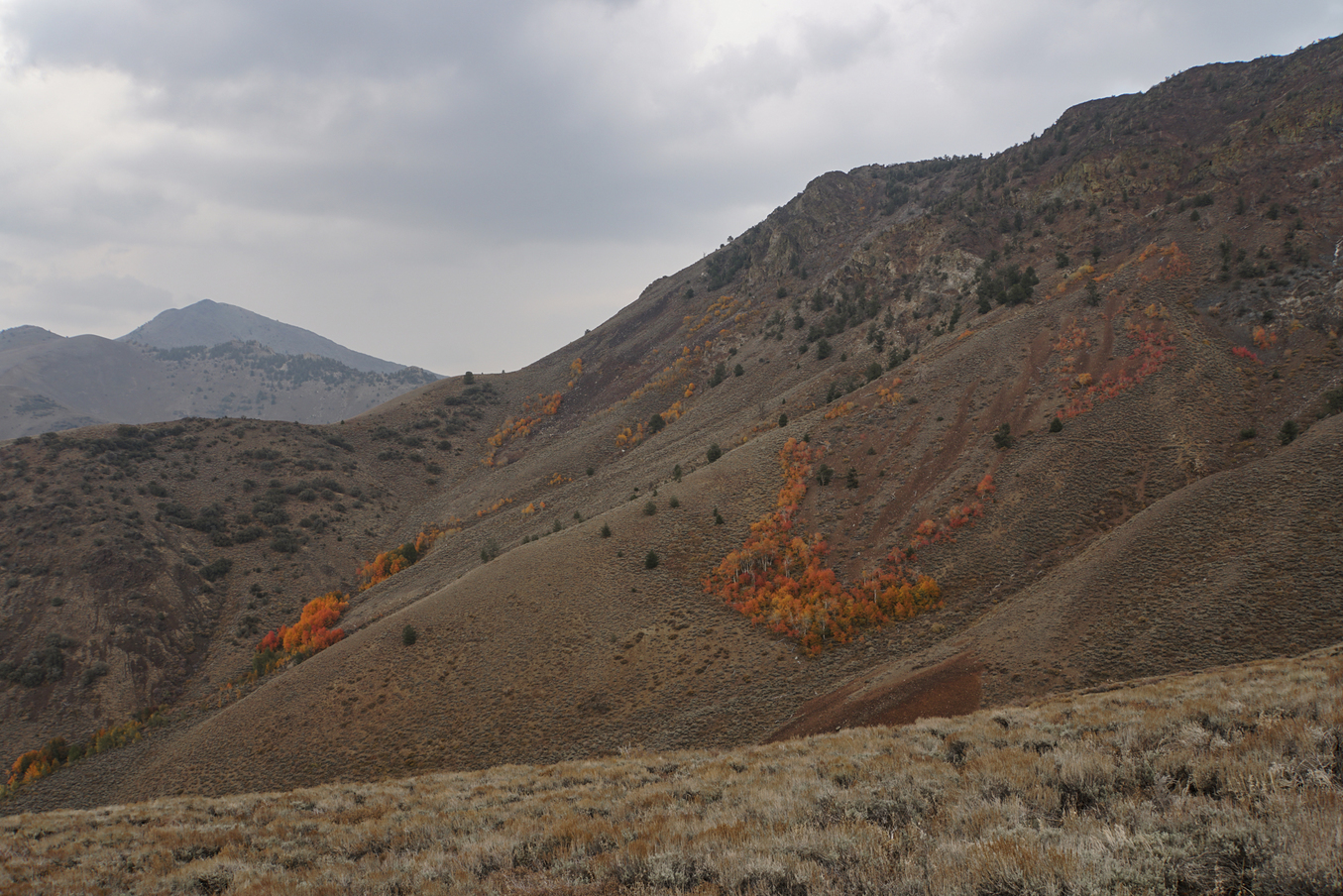 The Mojave Desert, like every desert in which I’ve spent time, possesses a very unique feel and color palette. The geology is dominated by thick sequences of heavily faulted marine rocks – shales and limestones, all shades of gray in color. And the sagebrush in October was a grayish-green. The skies ahead of the incoming storm systems were a dark gray-blue. But I managed to catch the peak of the fall colors, so little aspen groves nestled in some of the Toiyabe’s narrow drainages stood out prominently as bursts of yellow and orange, the only flashes of color I could see in any direction. After climbing 4,000′ up to Ophir Pass, I giddily turned onto the TCT, a moment to which I had been looking forward for so long. 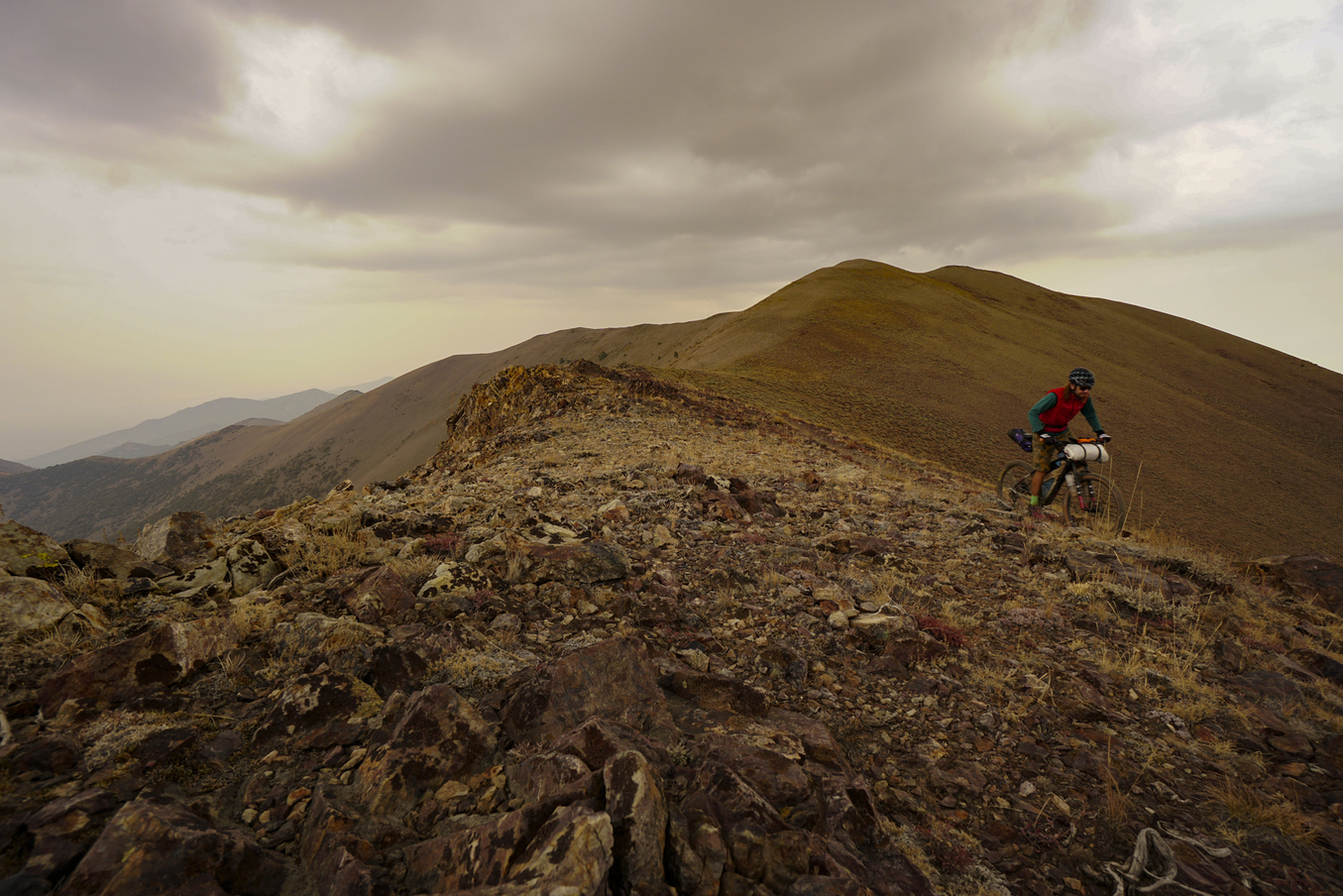 The sky was ominous, the air was brisk up at 10,000′, and I was grinning. I’ll let the photos of the trail and the range speak for themselves, but the riding was good. Any trail that spends time atop a mountain is fantastic in my opinion, and this trail was unlike any I had ridden. Rocks were surprisingly few and far between in general, as were trees aside from the scattered aspen groves and a few stoic bristlecone pines. It was sage, sage, sage, right up to the edge of the alpine! And I do love sage. The trail rose up and down along the highest ridge before dropping off the west side a bit to bypass some cliffy peaks and granite domes. The aspens glowed. Cat tracks were quite frequent. And the sky threatened. I worried a bit about how impossibly sticky the trail would become if it rained, and I kept glancing behind me, wondering if the cats were nearby. 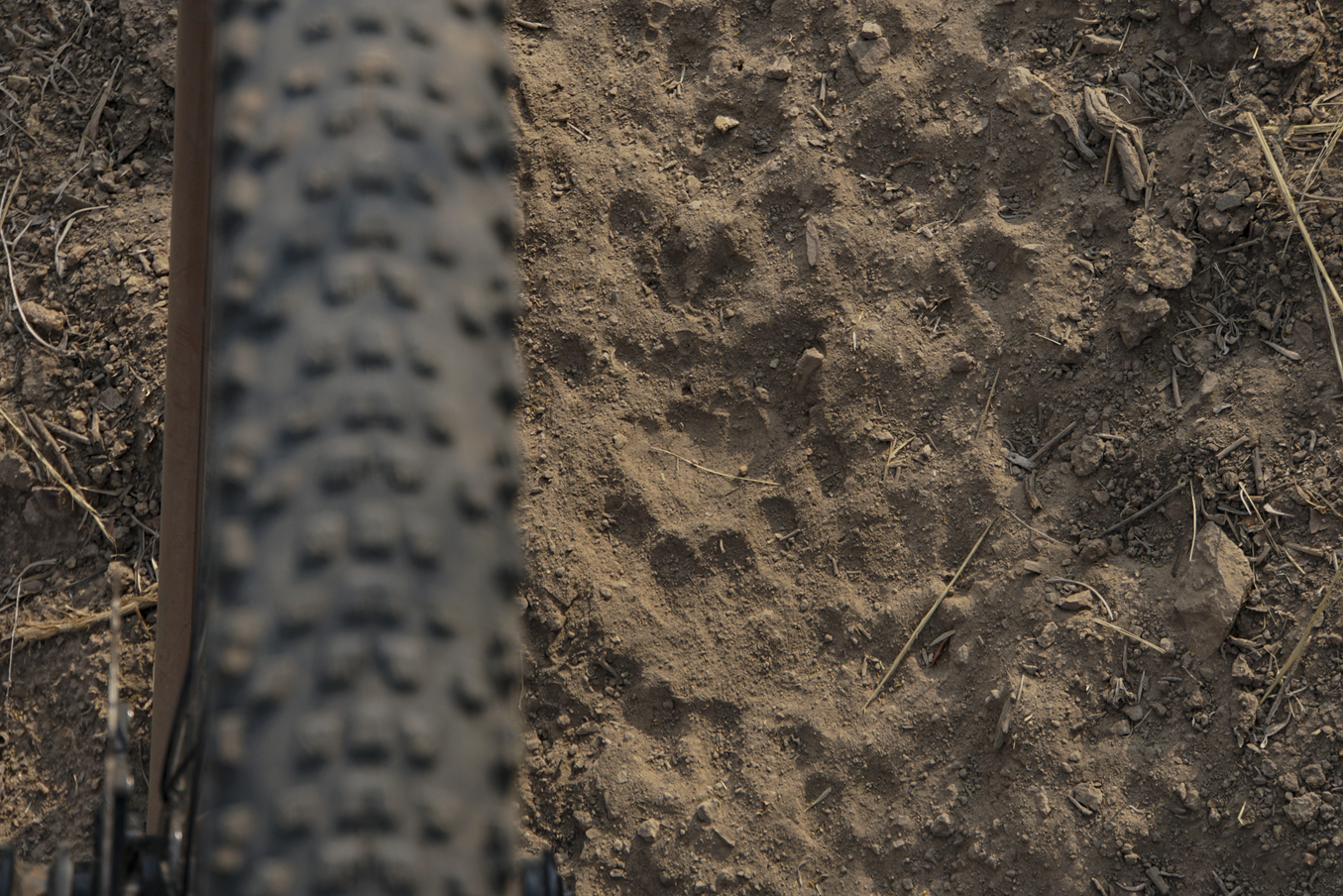 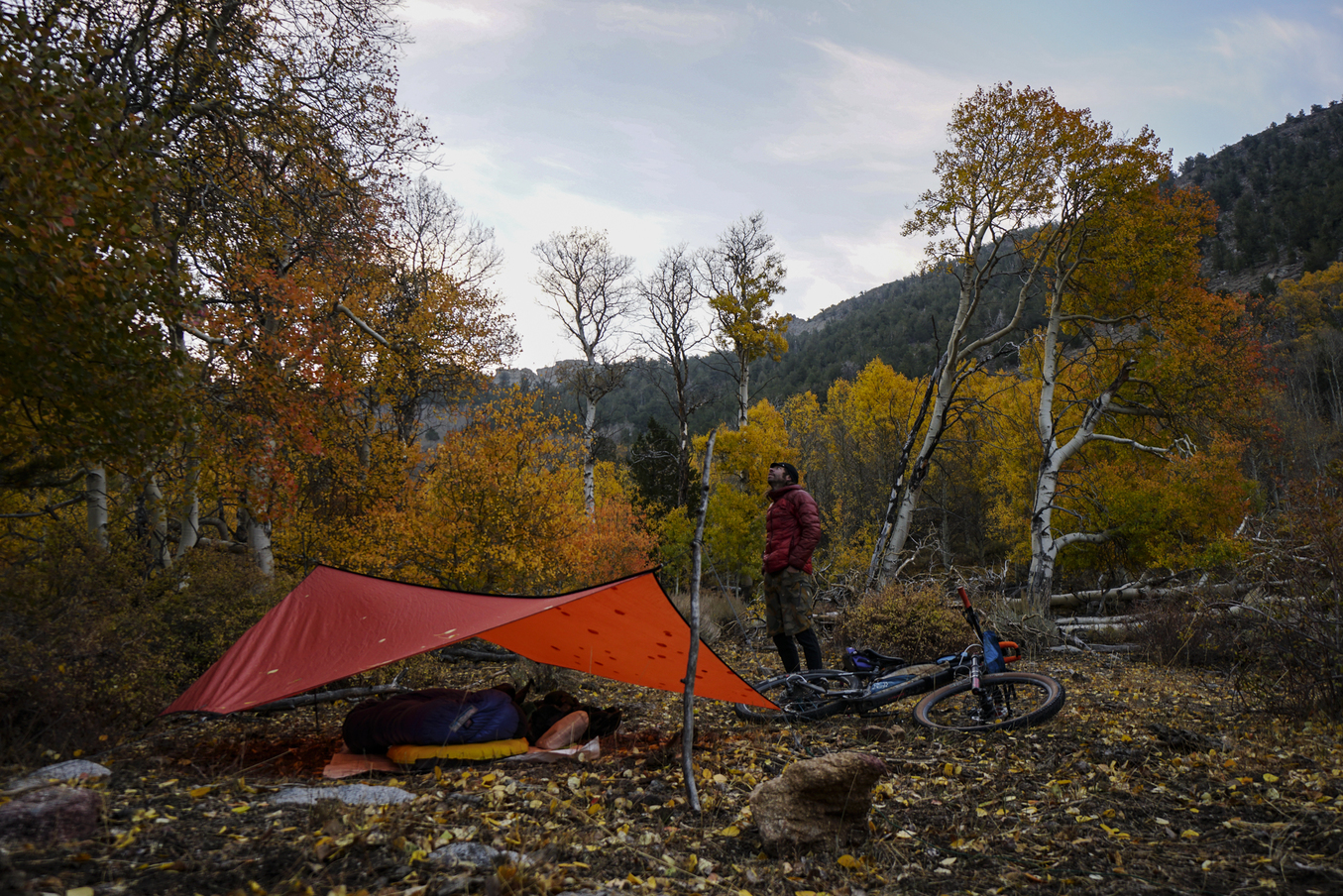 I set up camp amid a stand of old-growth aspens as thunder closed in on my just before dusk. Lightning flashed and thunder echoed off the cliffs above, but fortunately, the storm was far more energetic than it was rainy. By morning, the trail was mostly dry, but the ominously gray skies persisted and a strong wind had kicked up. Excited to finish the second half of the trail, I got moving quickly and enjoyed more miles of stunning riding and beautiful scenery. I spooked a couple hunters – a father and young daughter – who were crouched near the trail glassing for deer in the opposite direction. The father was fascinated by the concept of bike camping and remarked that he hadn’t seen a bike or bike tracks on that trail in his two decades of hunting in the area. The daughter, meanwhile, kept gazing at the next ridgeline for deer. 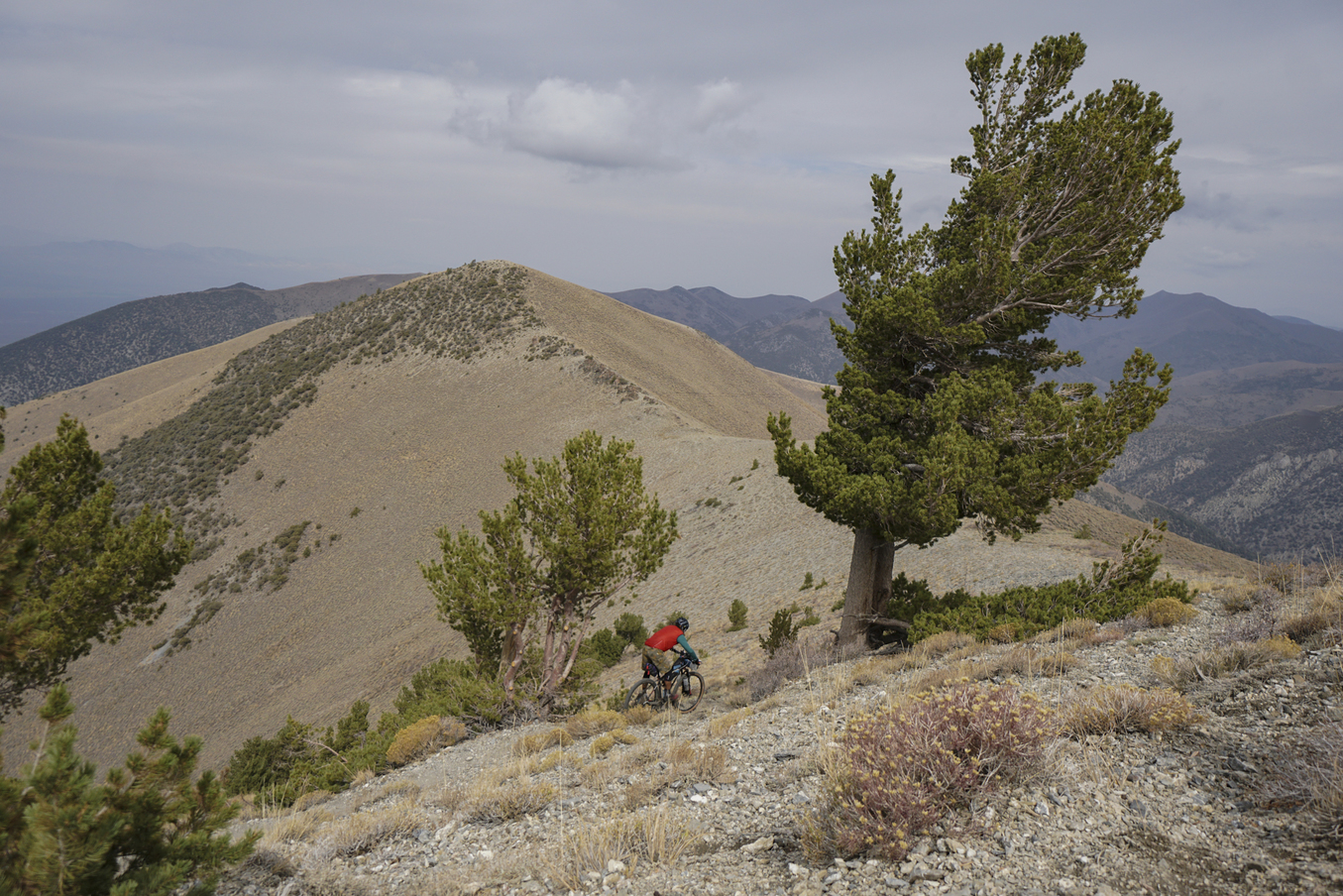 The northern end of the TCT again climbed to over 10,000′ before plunging down into a deep canyon. I struggled to stay on my bike in the increasingly strong wind, ironically passing a towering bristlecone pine that hardly let a single branch blow around. The long descent dove down a leeward slope, and I laughed as the wind vanished and the long descent below me opened up, revealing just how far down it was to the trailhead. 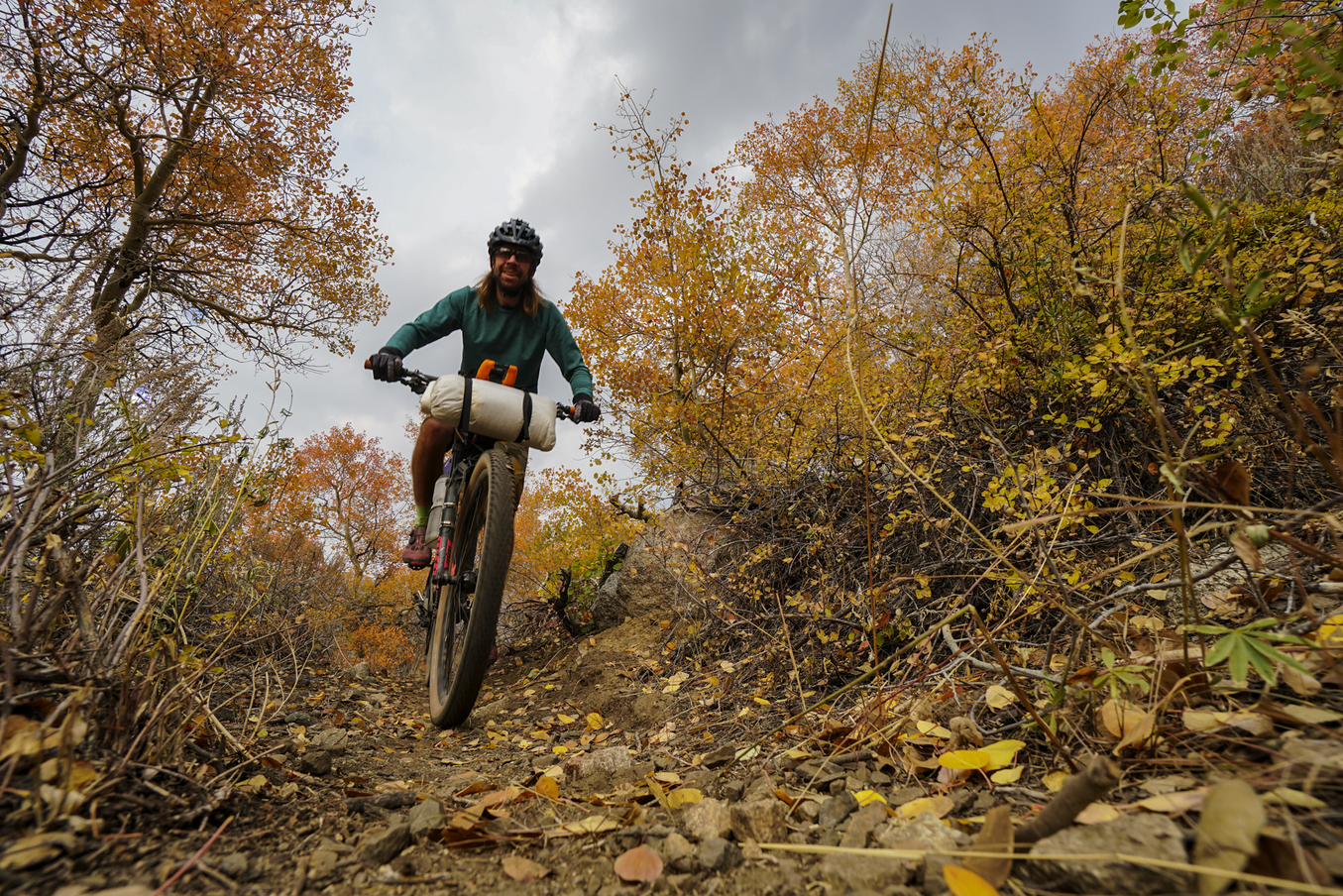 I closed the loop with some dirt road and a 20-mile battle straight into the fierce headwind on the quiet highway. Rain moved in just a few hours after I finished riding. I watched its arrival as I soaked in a nearby hot spring and applauded my decision to move on to plan D. A few days later, I got a message from Kurt Gensheimer that the TCT had gotten 8+” of snow at its lower elevations. After more than a decade of waiting to ride this trail, I had just slipped in with hours to spare before the riding season for the TCT came to a close. And that bigger Great Basin loop will have to wait until next year.