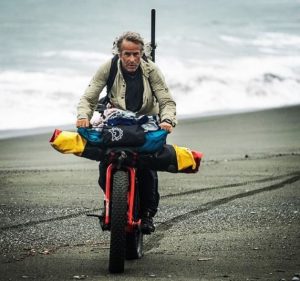 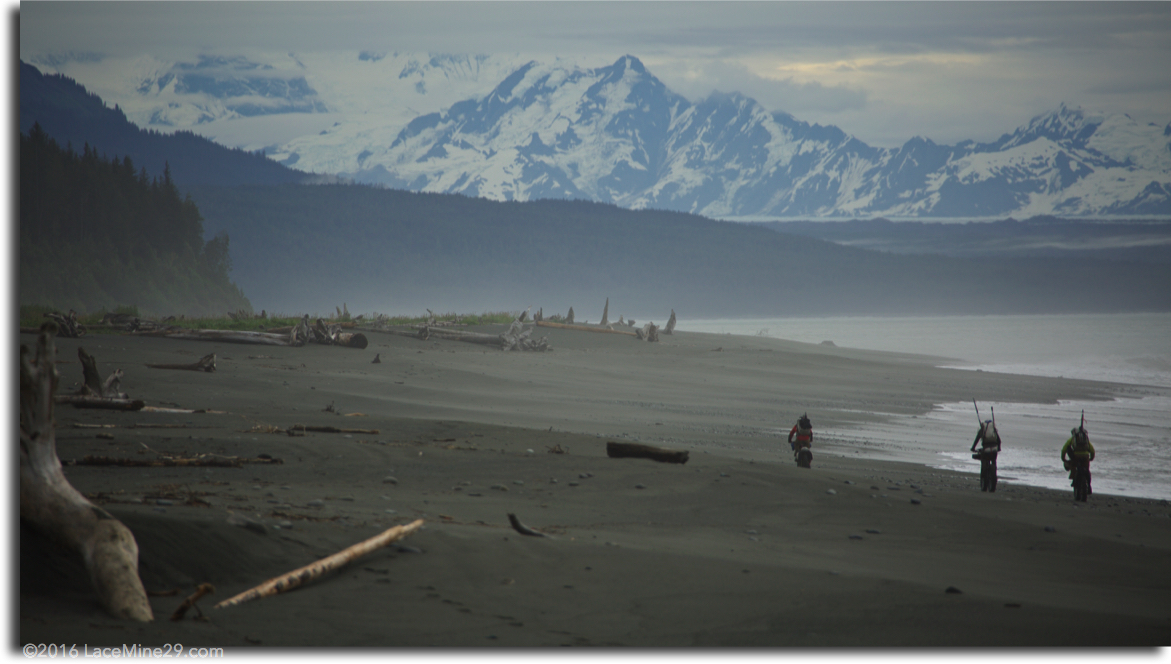 The Lost Coast falls logistically into three parts: Cordova to Icy Bay (Lost Coast North), Icy Bay to Yakutat Bay (the Malaspina Lost Coast), and Yakutat to Gustavus (Lost Coast South). The early hikers often split the coast in three, too, using the landing strips on either side of Icy Bay and Yakutat Bay instead of packrafts for the five-plus mile crossings of tide water. But the cost of a single engine Otter, a big plane that holds at least seven people and bikes, from Yakutat to Icy Bay is $1,700.

Eric and the map suggested going from Cordova, taking the river down, an obviously easy start. A hydrologist will tell you to go to the end of the road out of Cordova, where the river has broken its bridge and washed it away. Put in there, he’ll say, where 90% of the 200,000 cfs is flowing, to be whisked down to Cottonwood Point near the Delta’s barrier islands.

But an Alaskan adventurer will tell you that road and river choice, ugly on the map, is missing out on a crossing of one of the major ecological features of his State: the Delta itself. It’s a key wilderness of shifting sands, shallow channels, and a thousand seals feasting on Copper River red salmon, with the looming Gulf just downstream.

Erin and Hig, who consider the Lost Coast their favorite stretch of the Seattle to Aleutian route, called the Delta “a vast and unnerving obstacle.” DeWoody and Lawson called it “a muddy Hell,” and don’t forget the world-wise Italian Doro called for a Coast Guard rescue from the midst of the Delta.

We left the Round Island bridge over the Copper River, 15 miles from the airport, fully engaged with riding soft sediments of sand-grain size and smaller that led to a flooded wetland. We inflated and loaded the bikes, working our way east into a fog that spread across the Delta as the moon rose and the sun set. Trippy, vertiginous fog swallowed up the shining mountains, leaving us with shallow water and a confusion of grounded logs moving fast in illusory currents.

Thankfully we made it to the north end of a long, unnamed island as it got too dark to paddle. 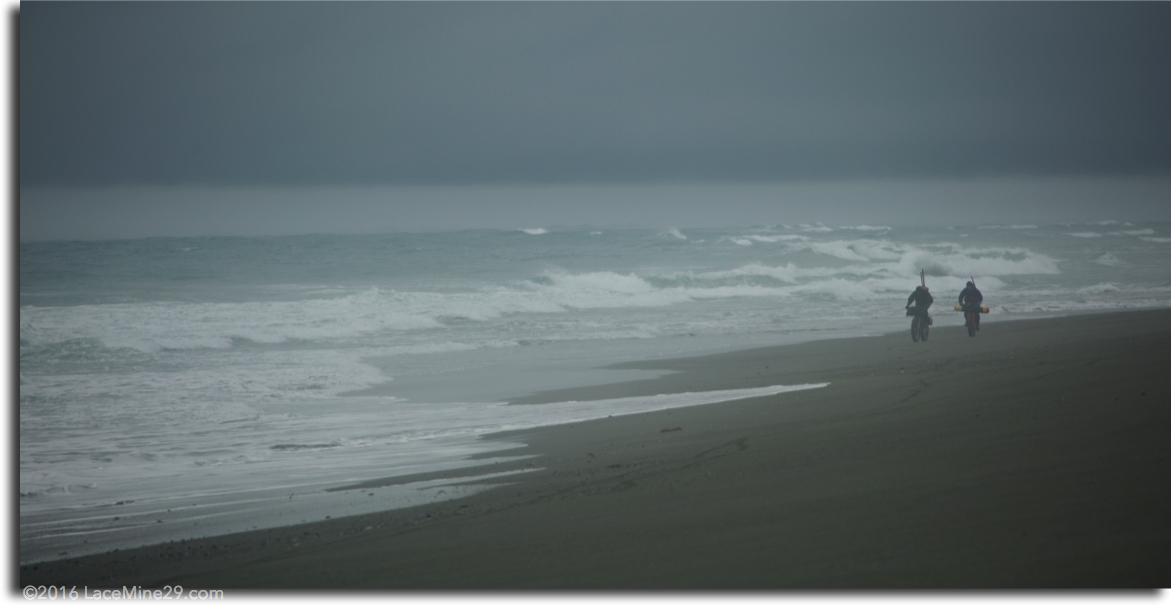 The other major obstacle is Icy Bay, where ice bergs, headwinds and rain, or all three can block passage. Even during our remarkably calm crossing we found 15 foot swells capped with chop. We stopped only once during our six and a half mile crossing and it took us just under three hours. We left a little after low tide, more willing to be washed up bay than down into the Gulf. We squeaked through in a weather window of calm winds, little rain, and thankfully no ice.

Others have had glassy crossings. But during their November 2007 crossing, Hig and Erin had thick ice, big swells, chop and rainy winds. Turned back on their first attempt, only a quarter mile from shore, a floating wall of crushing ice forced them up bay. Then they peed themselves in the dark as they paddled the six miles back to the shore they’d left from.

The key piece of their conversation in this most dire of situations was this: that should they survive, they would have a child “soon after this trip”.

They waited a week for conditions to clear and cross.

There is an island in lower Icy Bay, Gull Island, a comforting place, with surf on the ocean side and a calm lee offering protection for landing on the east side of the Bay, just down-bay from the mouth of the Caetani River, where there is a private cabin that might serve emergency use.

The people at Icy Bay Lodge located on the shore of the only calm anchorage between Yakutat and Cordova are young and friendly. A road leads four miles to the airstrip.

Two other airstrips are worth noting. One on the west side of Icy Bay might serve well for pick-up or drop-off, too, as will the conex trailers at the Yakataga air strip. Both of these airfields have buildings around them and ATV trails leading from the beach. 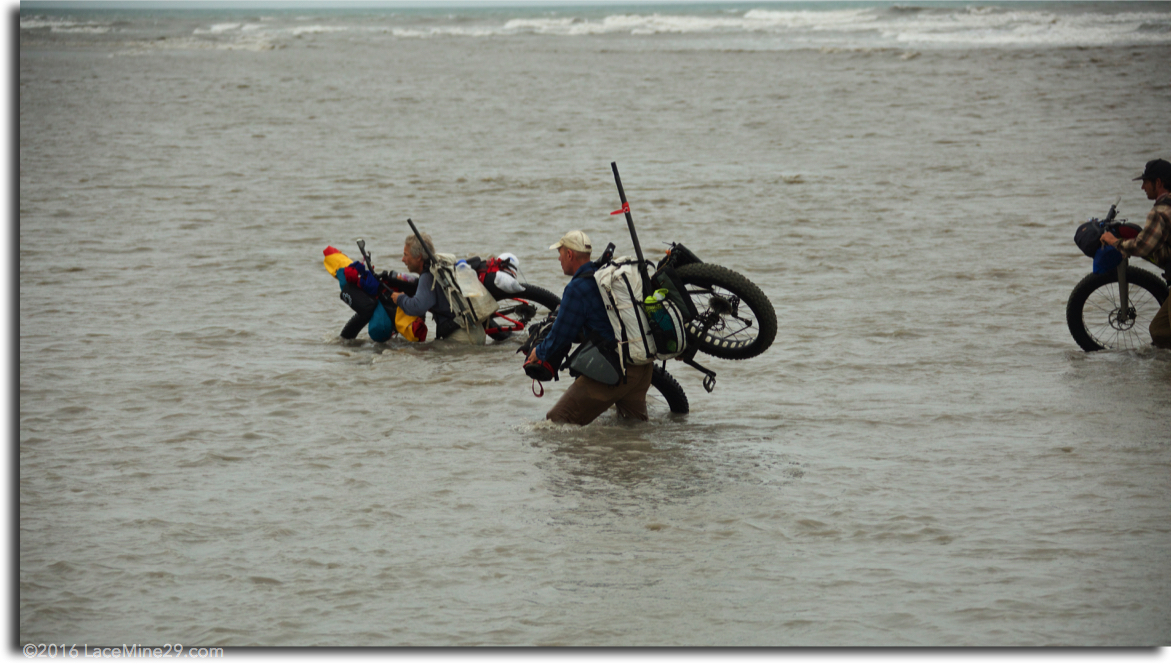 The river crossings between the Delta and Icy Bay require mostly common sense, some survival skills and good knowledge of ferry angles. The Seal River had icebergs floating down from the Bering Glacier.  Its Colorado River-sized volume created an icy, little microclimate. For me, it was the most challenging crossing.

Many of the other crossings, including a multitude of tidal channels, we crossed “disaster style”, learned from Eric and Dylan in 2011. Wearing our packs or sitting on them, no spray skirt or deck, bike with both wheels still attached thrown on the bow, maybe balanced, maybe stabilized with a strap or two, disaster style is fast. But for the Seal River, the Big River, and, of course, the Copper and Icy Bay, we took off the wheels, and for the two big obstacles we packed our stuff in the zipper tubes.

Controller Bay surrounds Kanak Island and Okalee Spit, both of which have great beach riding. But the Bay itself covers a vast mud flat, unveiled at low tide. It’s another memorable obstacle to Lost Coast North travelers.

At the west end of Controller Bay we crossed multiple channels by strapping our backpacks to the bow of our packrafts with the waistbelt at the bow and the top of the pack at the second pair of grab loops. This way we could ride with the boats inflated on our backs so that transitions were quick and easy. The bike was balanced disaster style on the stern as the boater/biker sat on his pack still strapped to the bow and paddled across. 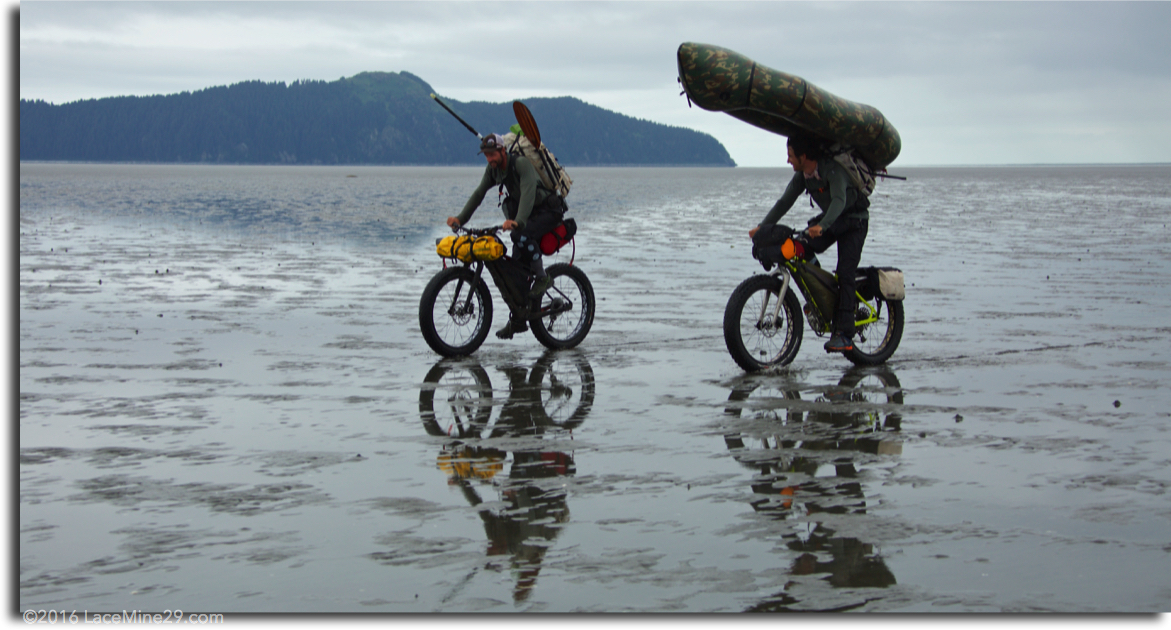 At the east end, due to my off-the-couch fitness level, I found myself way back of the pack with Peter Pan and the Lost Boys waiting at the final channel. Alas, the tide was not so patient. As one of my teammates after another rode by with their rafts deflated and stowed, convinced there was no more water to paddle, I stopped and followed suit. Shoving a Cadbury bar into my mudhole while deflating, the tide crept up on me. I had to deflate and roll the boat in ankle deep and deepening water.

I pedaled off to higher mud, hurrying to catch up.

Ten minutes later, while the others waited on the far side of the last channel that none of us had seen, I had to quickly inflate the boat floating standing in the rising tide, bike balanced by my side.

Needless to say we all had dry-suits for these disaster-style shenanigans. 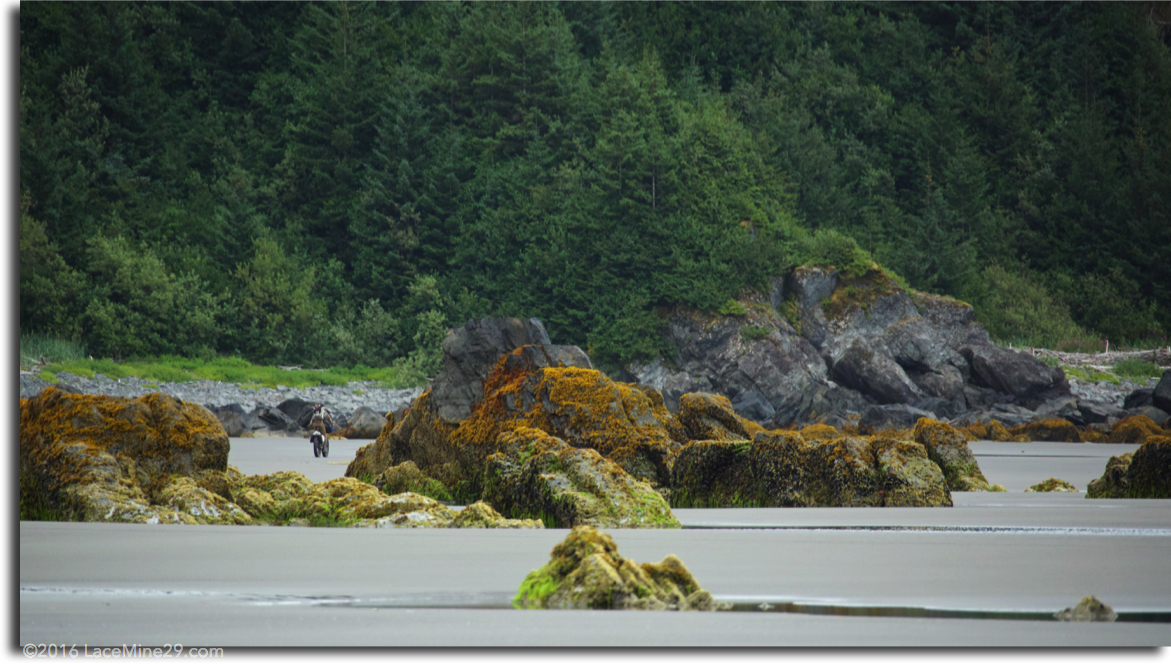 The geology and climate of the Lost Coast interact to make some of the most dynamic, dare I say powerful, geography on the continent.

First there’s the Pacific Plate diving tectonically below the North American Plate, scraping itself off as it goes. This leaves giant mountains, like the highest in Canada, Mt. Logan at 19,551 feet and Mt. St. Elias a hefty 18,009 feet rising right out of Icy Bay. Then there are the 14 other peaks above 14,000 feet crowded into the St. Elias and Chugach Ranges.

Second there are the Aleutian Island low pressure systems that spin counterclockwise over the Gulf of Alaska. This means they blow strongly, warm-ish and wet, right up the coast as you pedal toward Yakutat — or give you an awesome tail wind from Yakutat to Cordova during foul weather in July and August. When the weather clears (like in June), there’ll be a tail-wind from the northwest.

We never really got to enjoy those clear weather tail-winds, leaving as we did July 18. Alas, those clear tail-winds were there the week before and the week after Jon and Brett’s Alaska trip window.

We had the wet head-winds.

Third there’s the Japanese current that comes up from the tropics and across the Pacific to bring relatively warm water to the Gulf of Alaska where it meets the coast. Some of this water evaporates into the atmosphere to later condense in the high mountains, feeding giant glaciers, like Rhode Island-sized Bering and Malaspina Glaciers. The Bering Glacier and its associated Bagley Icefield is the largest glacier in North America with most of its outflow coming down the Seal River in a flow volume bigger than the Colorado of the Grand Canyon.

Ok, one more science lesson. As the climate warms the giant Malaspina and Bering Glaciers melt, lightening their load on the North American Plate. This lets the Pacific Plate slide a little deeper, generating more earthquakes, which in turn let loose more landslides, leading to local tsunamis in the bays and fiords of the Lost Coast.

And while we’re on the topic of “climate chaos” (one of our hiker’s phrase), it looks like sea level is rising, or maybe the severity of the storms is increasing, but this part of the Lost Coast, particularly west of Icy Bay is just getting consumed by the Pacific.

The North Pacific is clawing away at the coastal rain-forested coast, chewing up its trees and spitting them back out onto and sometimes into the coastal dunes. Miles of tall dunes have tree-sized logs skewered into their sides.

Some logs were lost from the logging hey-day west of Icy Bay over a decade ago. But most of the beach logs we pedaled by have root wads still attached and can be seen toppling into the surf near Icy Cape. 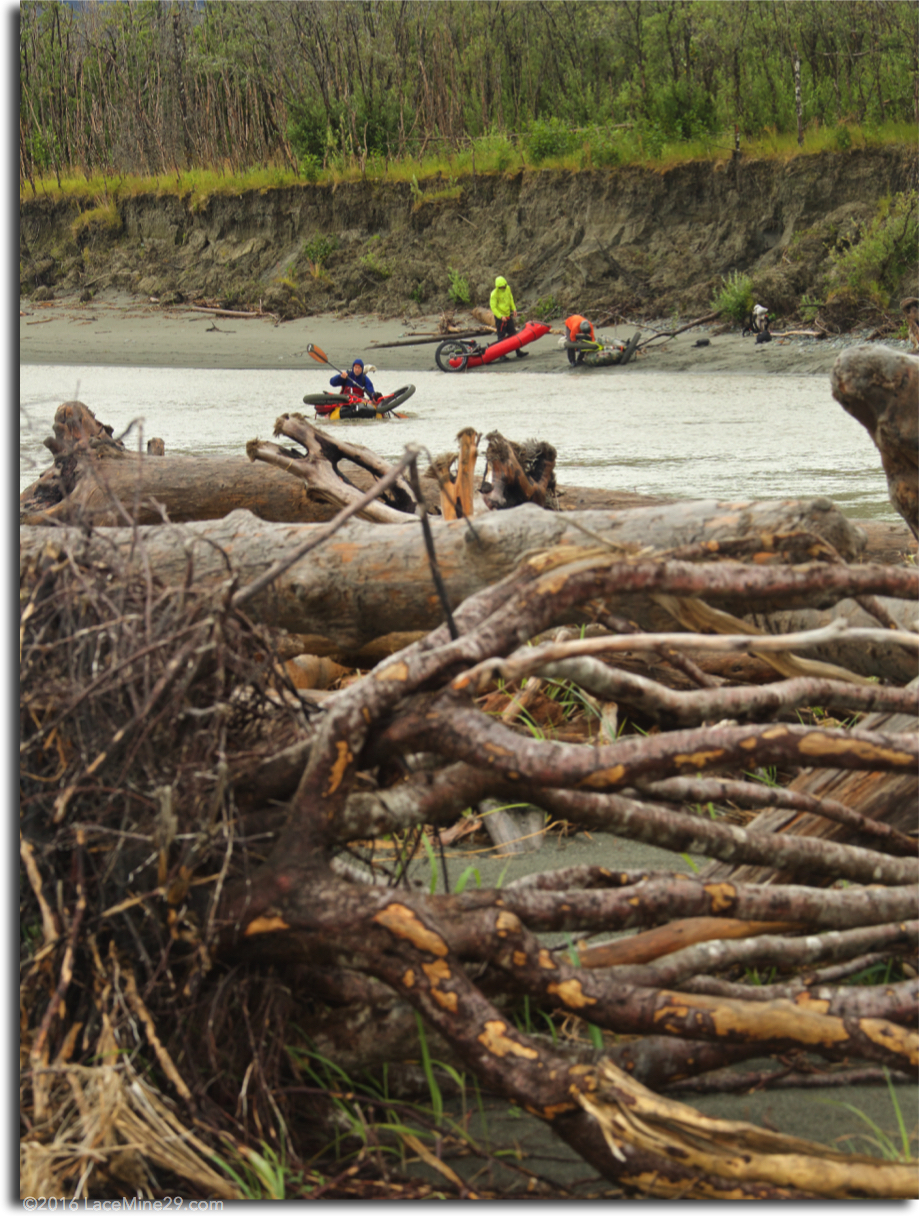 Go to http://mapper.acme.com, search “Guyot Bay, AK”. Then marvel at the coastal erosion as you toggle between “Satellite” and “Topo”. Icy Cape and Guyot Bay are gone. It looks like over five square miles of coast has washed in to the ocean.

Hig has a great explanation of this beach erosion phenomenon on the Malaspina Lost Coast (Coastal Erosion at Malaspina Glacier).

If you should visit, you’ll note — as you hurry along the narrow beach and low tide surf grabs at your rims — that above you stretch 40 foot high mud cliffs blocking any escape.  Better get to the beach beyond quick!

Unlike the wild, Lost Coast South there are boats and cabins, roads, trucks, and ATVs, clear cuts, air fields and lodges, even bridges and telephones along the Lost Coast North. These human fingerprints do not diminish the majesty of the mountains, the ferocity of the surf, the power of the rivers draining the glaciers above. These signs of humanity do make for somewhat more comfortable respite from rain and brush, and for that human contact that we all find so much more valuable when it’s rare.

Stay tuned for the Part 3… 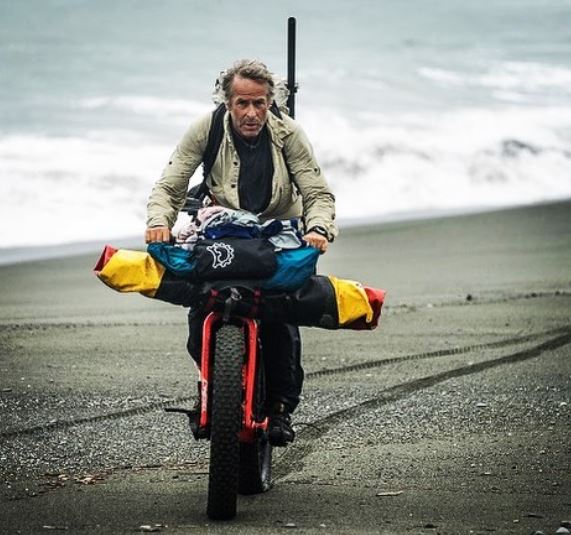 Roman Dial has been packrafting for three decades, from first descents of steep creeks to multi-week traverses of wilderness areas in North and South America, Asia and Australia. Dial is a professor of Environmental Science and Mathematics at Alaska Pacific University, where he teaches packrafting courses.