Photos and story by Annie Le Evans and Huw Oliver

Coming from a windy, damp island in the Atlantic, Brits seem drawn to frigid places as if by some magnetic force. Wherever opportunities arise for cold, dark suffering in far-flung parts of the world, you’ll find a Brit got there first and ended up having to eat his or her own boots. That said, masochism is a questionable motive for adventure, and when we made plans to explore the mountains of northern Sweden by fatbike last spring, we hoped we might learn to enjoy winter travel rather than endure it.

We started by equipping our bikes with the necessary gear to travel for ten days on a mixture of snowmobile and ski tracks and followed that with plenty of practise camping in the snow and managing all those simple, everyday camp tasks in temperatures of -20 degrees Celsius.

We confronted plenty of unknowns, but wholly absorbed the rewards of brittle, freezing morning sunshine on firm snow, aurora by night, and the boundless expanse of Lapland’s mountainous interior. As with any adventure, we wouldn’t know the outcome and we experienced our fair share of highs and lows, but throughout it all we fell in love with the peculiarly liberating feeling of living outside and traveling self-sufficiently by bike over a winter landscape. 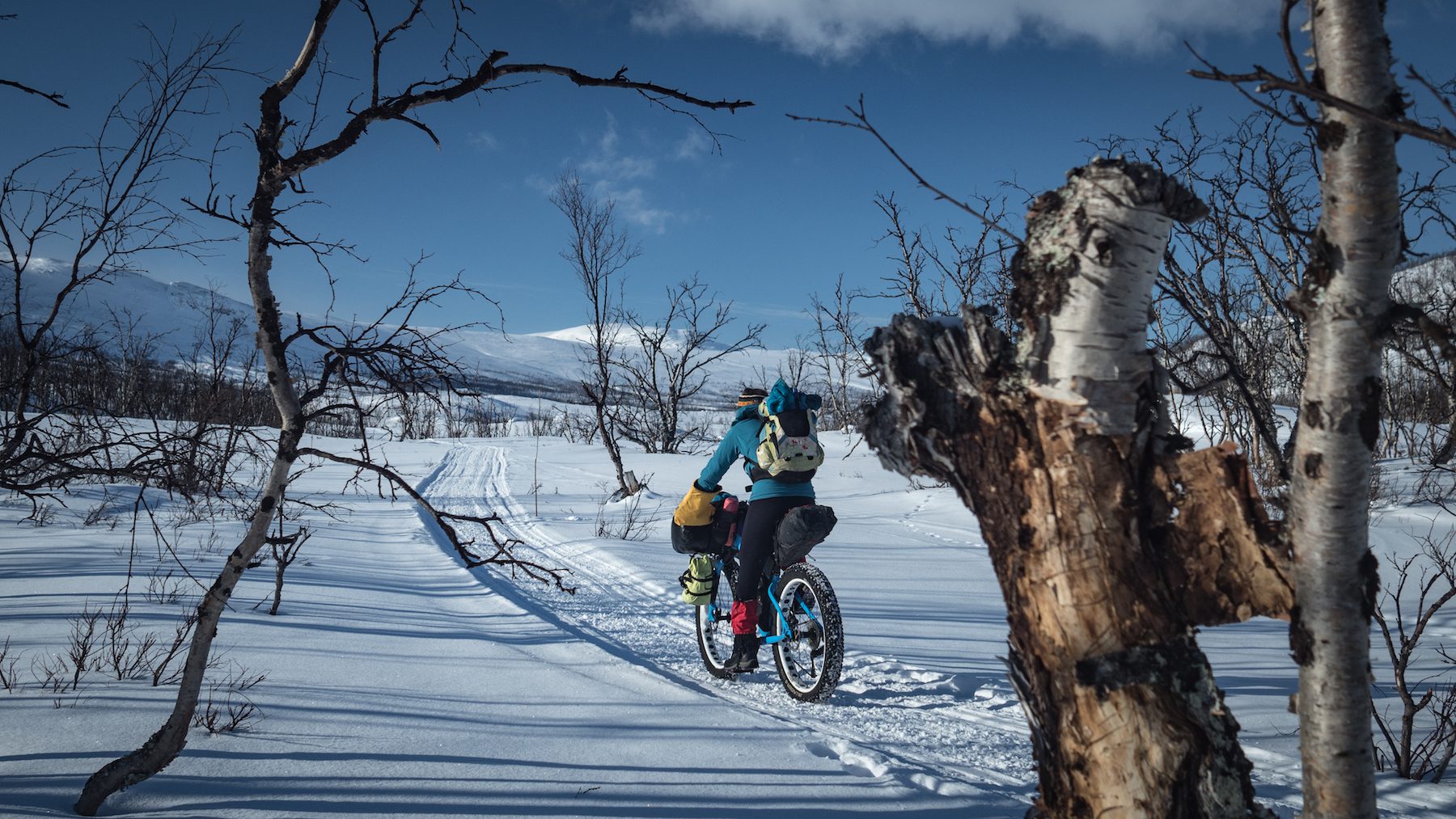 “All the planning, all the packing and all the hoping come to a head when you first set boot to pedal at the beginning of a trip. Our first day of riding in Lapland was beautiful: cold, clear and windless. The ski and snowmobile trails wound gently up the hill away from Abisko and Lake Tornetrask, through birch forest towards the mountains. The conditions were perfect for bike travel, and made us wonder if this might turn out to have been a good idea after all.” ~Huw Oliver 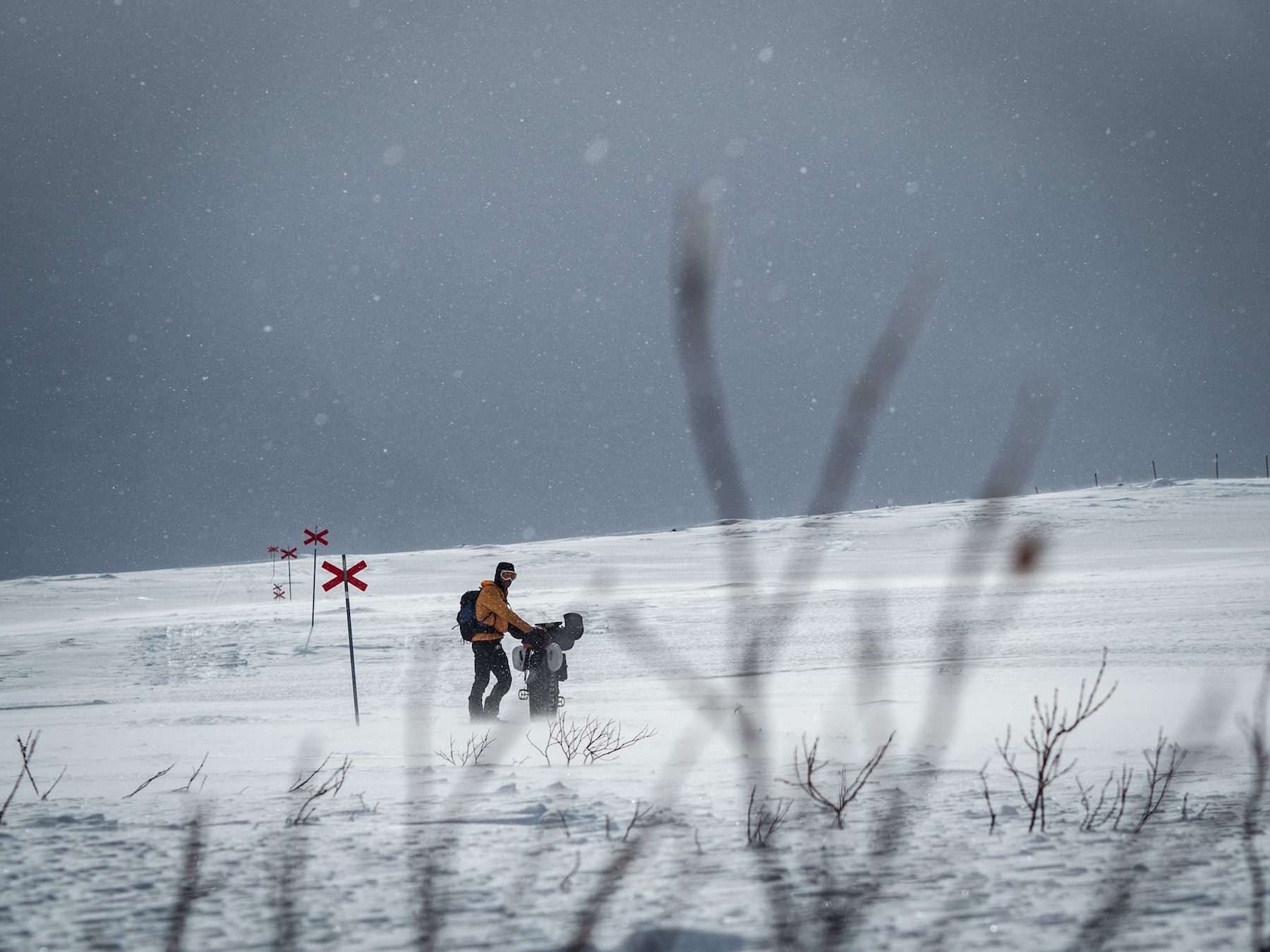 “As our route took us up and over the mountain plateau to the south of Abisko, the weather turned against us. Warmer temperatures, wind, and persistent snow made hard going as the trail drifted over, and the risk of getting wet increased. The red markers that line the routes of ski trails throughout Scandinavia were a comforting sight as they marched across the plateau, but they also beckoned towards a false sense of security. As the snow deepened, we pushed into the early evening, before deciding to stop beside Alesjaure and see what the morning held for us.” ~Huw Oliver 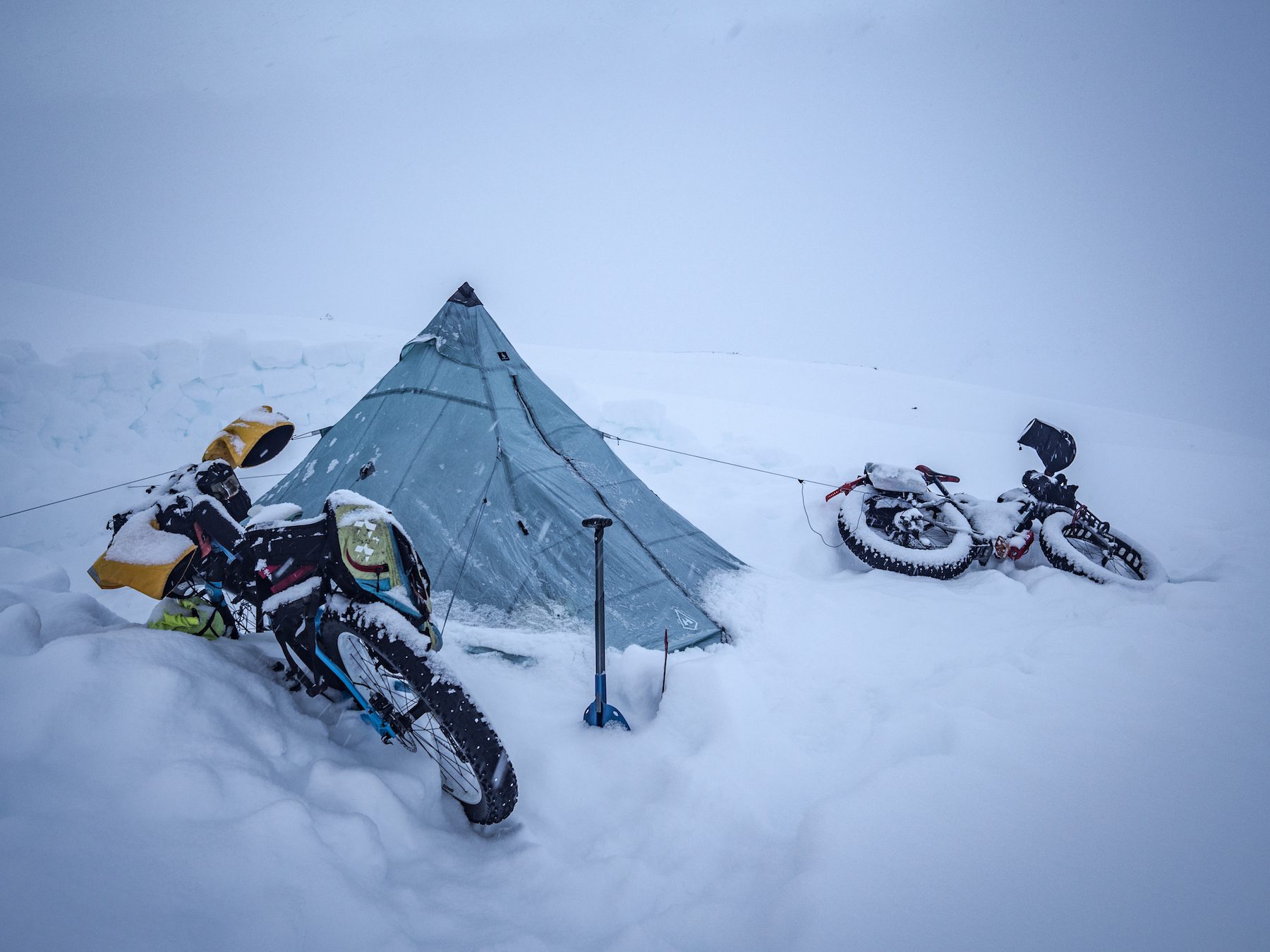 “The next morning was a welcome sight, of sorts. It had stopped snowing, but the trail (and our camp) was drifted in, and more snow threatened. The everyday chores of camp life become much harder work in winter, and the snow only added to that workload. The worst thing was when the frosted breath on the rim of my sleeping bag fell down my nose in the night! The skiers in nearby huts seemed to be taking a day off, so no fresh tracks to follow meant that we would be breaking trail for the day.” ~Huw Oliver 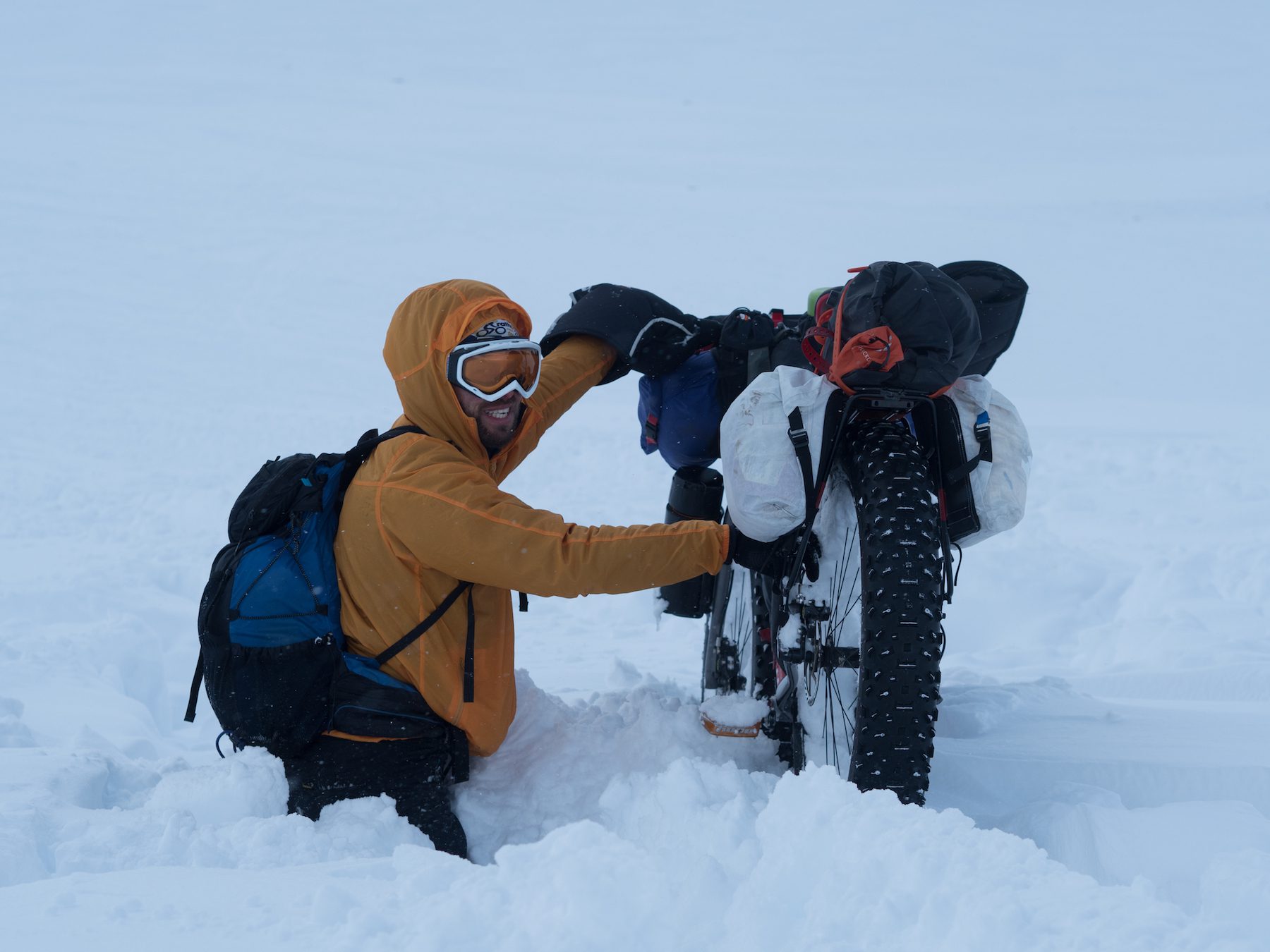 “The silencing blanket of fresh snowfall might cover the smaller features of a landscape, but that doesn’t mean that they aren’t there… A sense of humour was needed to get across the deep drifts of the mountain valleys, where the strong winds had dumped metres of snow into burn lines and gulleys. Falling up to your thighs for the twelfth time that afternoon kind of stooped being funny after a while, but the brief glimpses of the coires and summits surrounding us made up for it when a break in the cloud allowed them to reveal themselves momentarily. I think this might have been ‘pretend smile’ mode though…” ~Huw Oliver 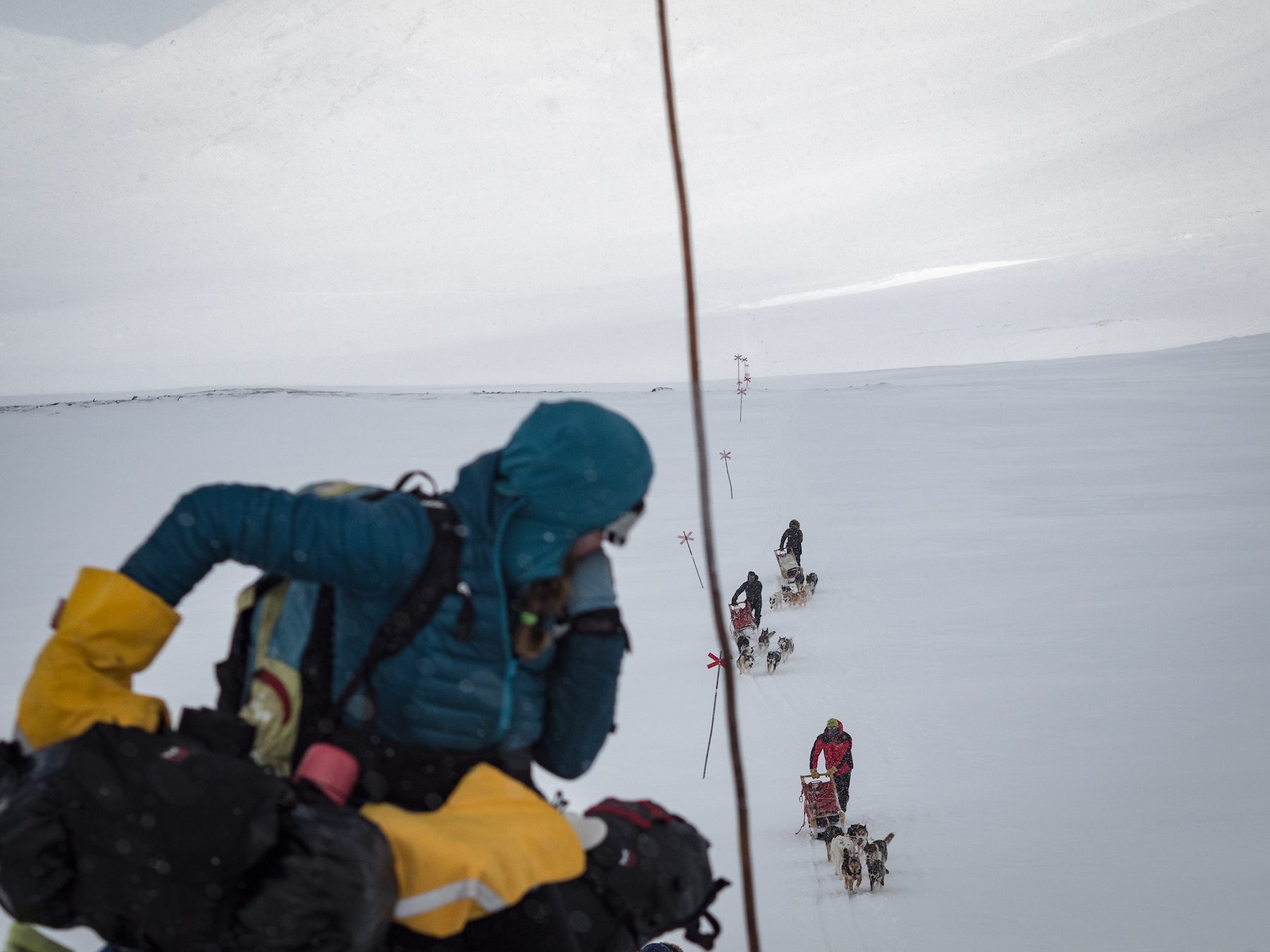 “We met the dogs the day we traveled over a high pass, swamped with deep snow. We had pushed our bikes on and off for several hours, when these guys appeared behind us. The dog teams move so easily, devouring the distance and, before long, they skidded to a halt next to us. Though slightly bemused by our bikes, the guide was positive about our efforts. He mentioned further down the valley, the scoured landscape wasn’t good for his dogs and so left us with confidence that things were soon to improve for us.” ~Annie Le Evans 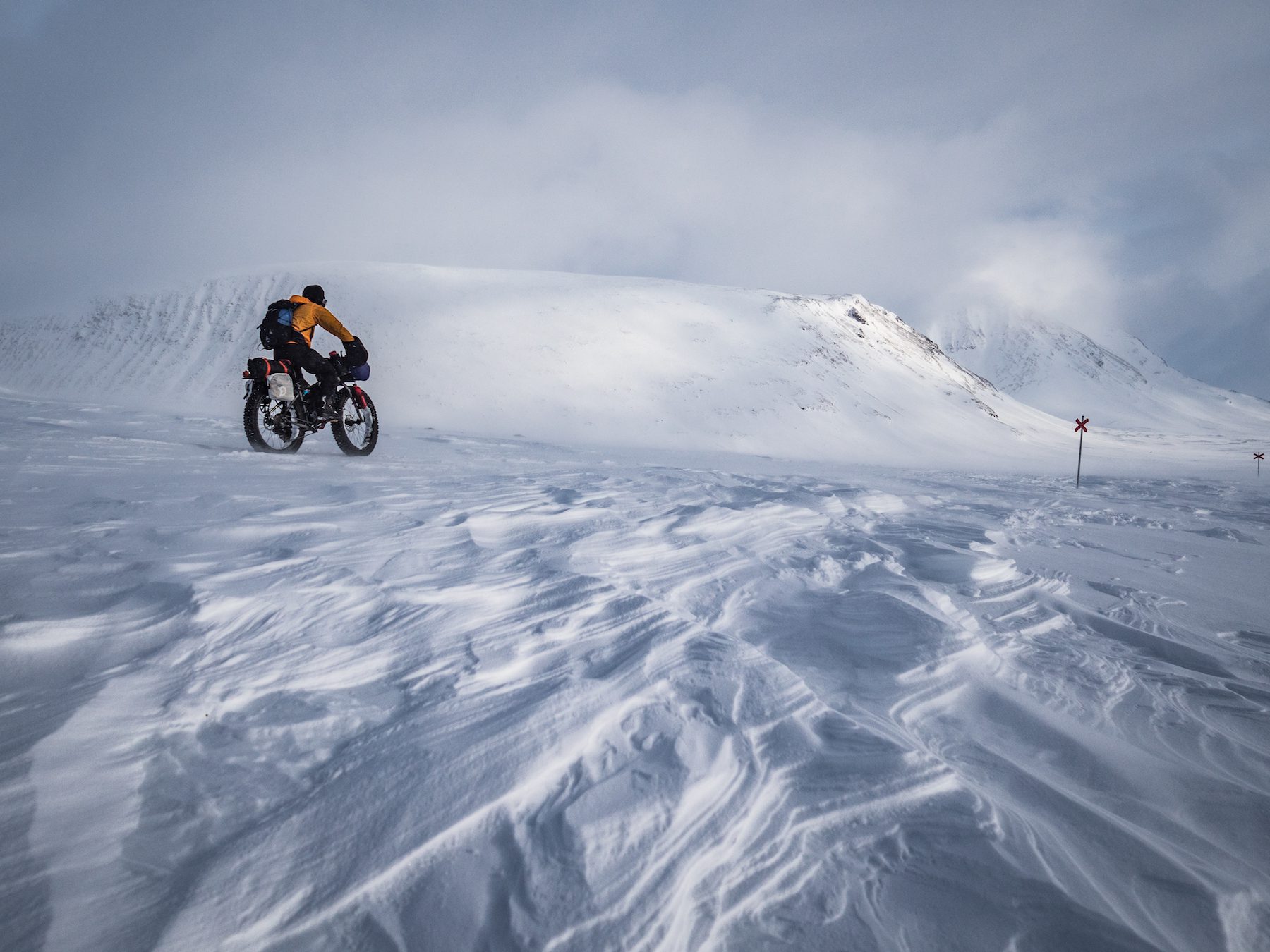 “Maybe because I’m not from a super snowy country, I still find a magic in snow covered landscapes. The snow is never the same, influenced and carved by wind before and after falling and temperature. As we rode with the gale force winds, it was almost like watching a mason at work, shaping the snow into new shapes before our eyes. These huge areas of sastrugi were stunning, often causing us to stop to simply admire them.” ~Annie Le Evans 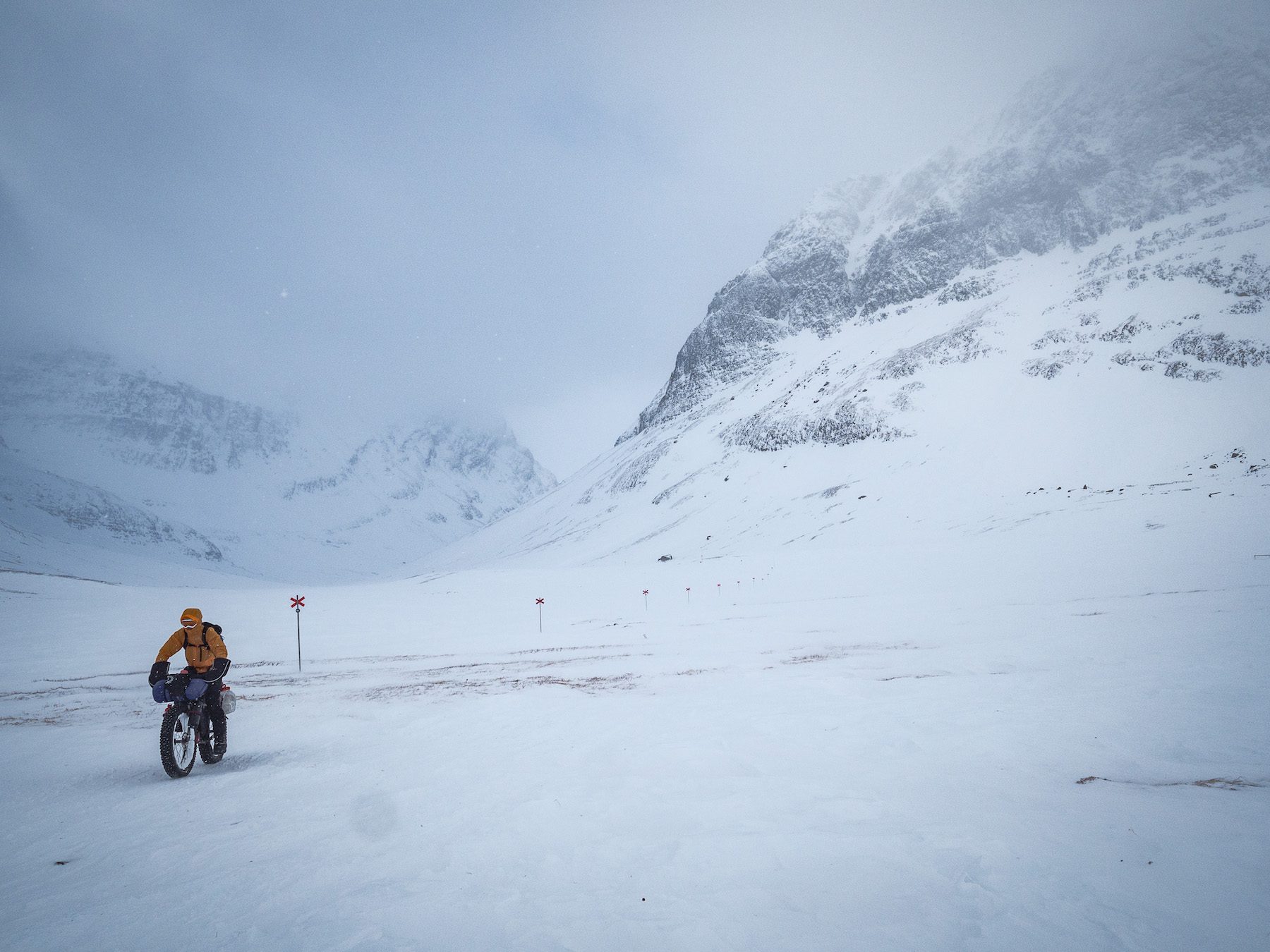 “We took this photo on one of the best days riding I’ve ever had. The trail took us over a final pass, the wind pushing us uncontrollably forwards. As the valley narrowed, huge dark cliffs loomed in the mist, surrounding a rollercoaster descent as we fishtailed through the soft snow. Being enveloped by huge mountains made us feel very small and reminded us what a privilege it was to be able to move through such an amazing landscape.” ~Annie Le Evans 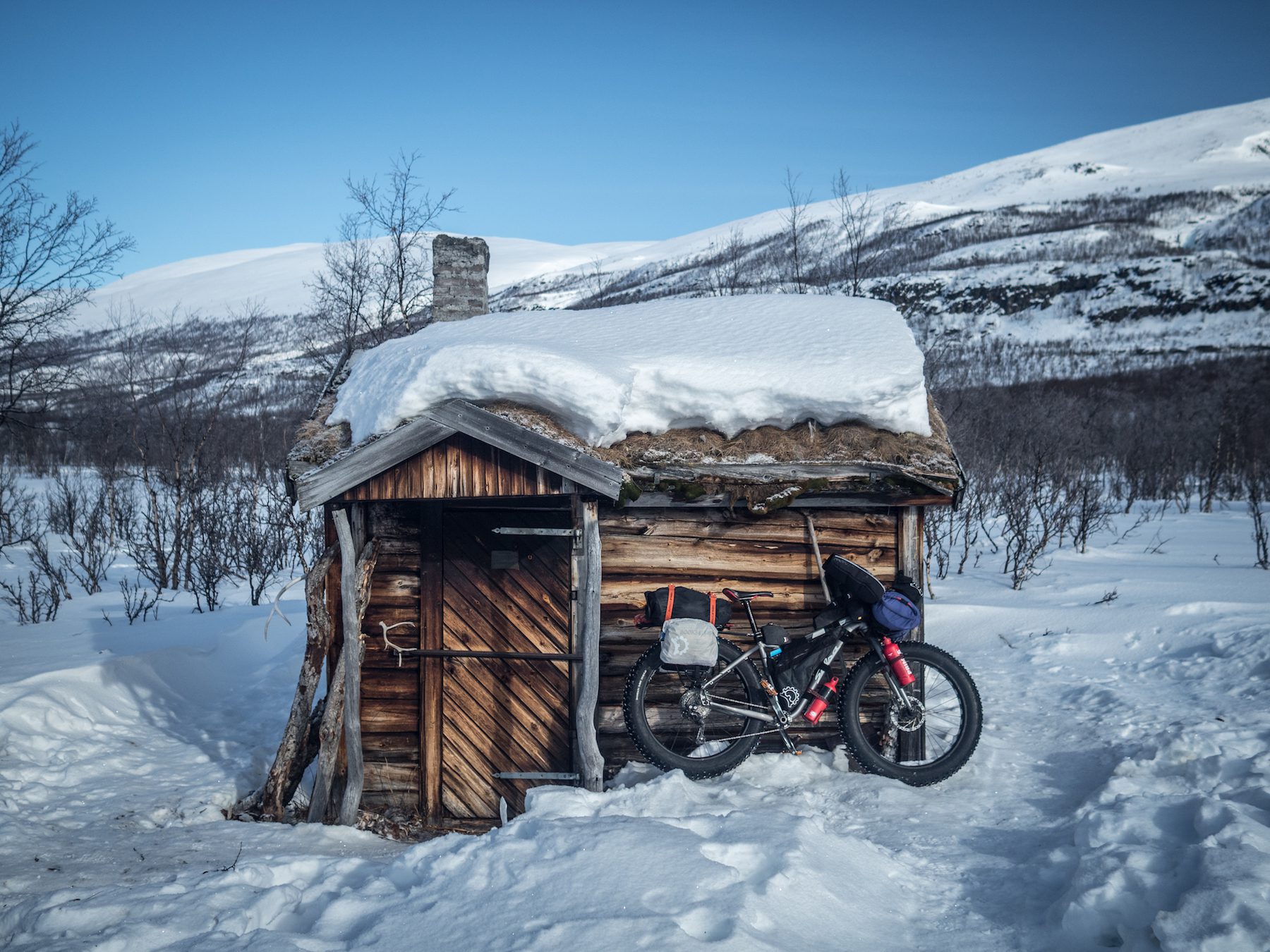 “This tiny cabin was nestling in the upper reaches of a heavily wooded valley; we spotted it as we wound our way up the snowmobile trail along the frozen river on a sunny morning, at the beginning of our homeward journey. The interior contained a fully-equipped living space, only in miniature. The mandatory cast-iron stove, a sink, bed and sitting space. Axe, saw and fishing gear, all neatly arranged and left clean and tidy by the few visitors who had spent the night there. It reminded us instantly of the Scottish bothies that dot our home hills, only these caretakers seemed to respect it more. Although silent and cold, it radiated the lived-in warmth of a place that has seen many hands, many memories, and many nights spent in comfort. If only we had gone a few more kilometres the night before, we might have been able to add our own. Next time!” ~Huw Oliver 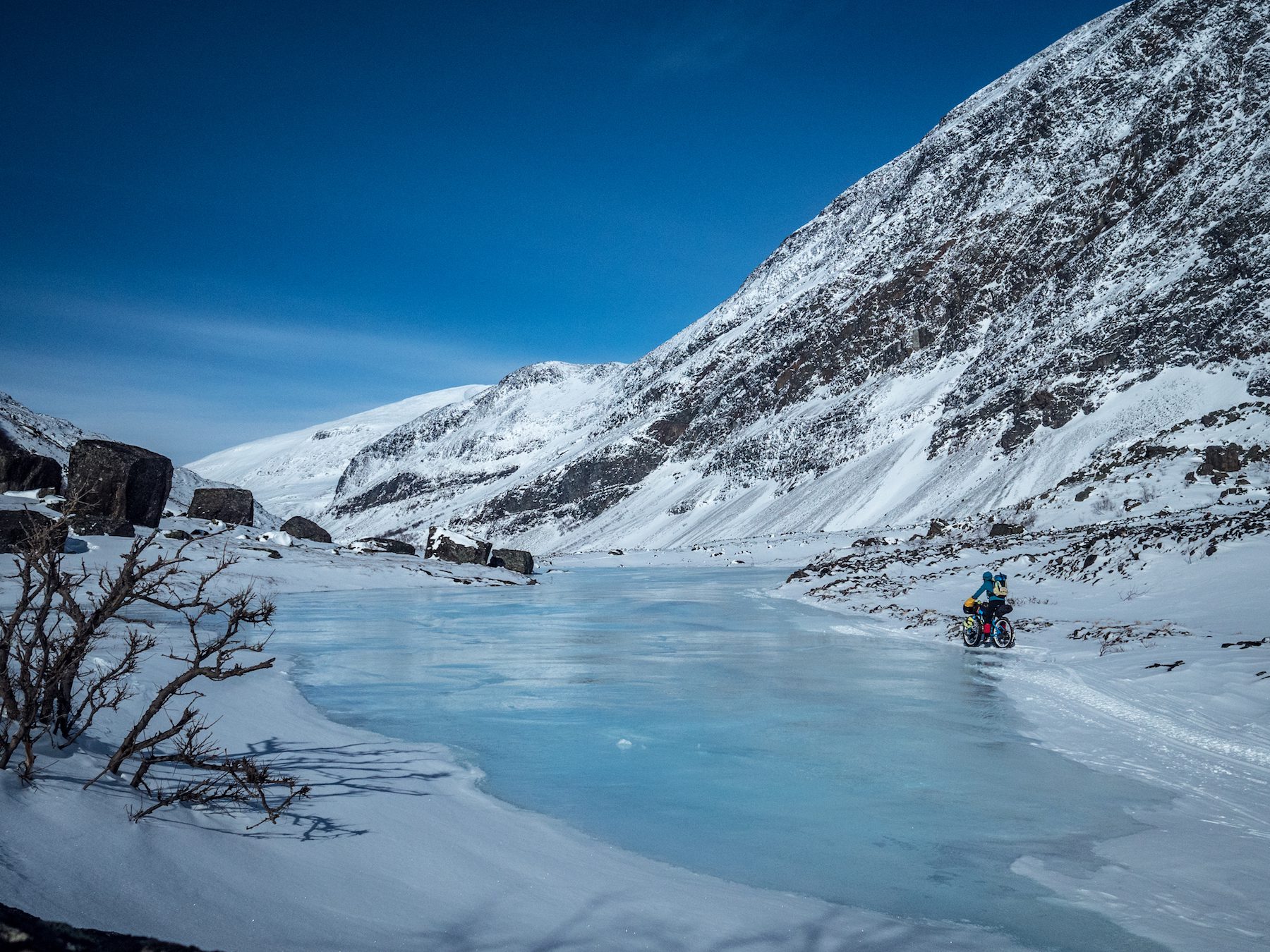 “We learned so much on this trip. Coming from a mild country, we had never experienced such cold temperatures and the landscape features associated with them. Pressure ridges and overflows (as shown in this photo) fascinated and scared me. Fortunately we were always able to sneak around the sides rather than have to cross these areas.” ~Annie Le Evans 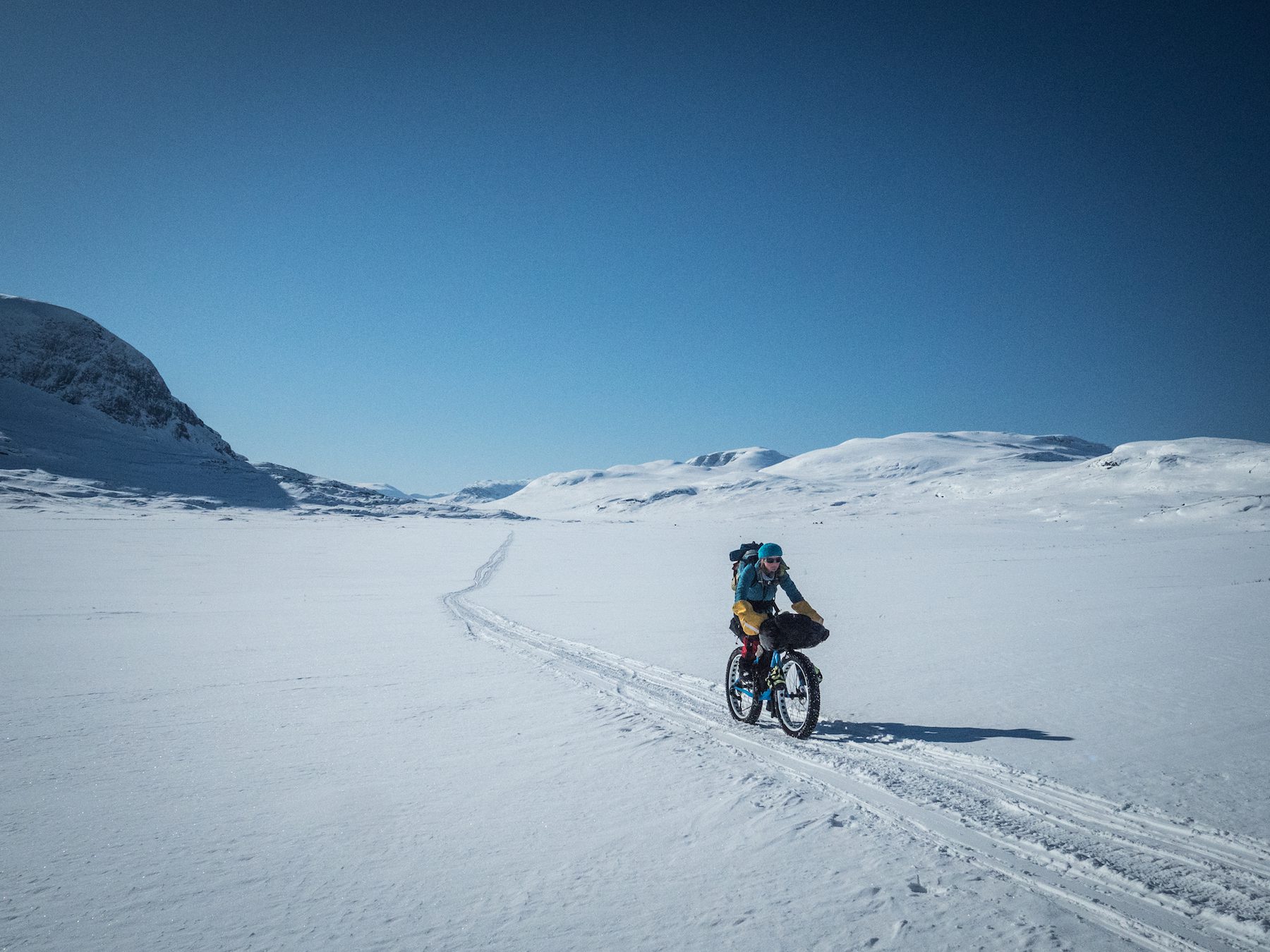 “Space. Snow covered landscapes, with reduced texture and the lakes becoming rideable surfaces, seem so vast. The snowmobile tracks were the only lines for miles, enticing us to go ever onwards. We found it took several slow moving snowmobiles through the soft snow to create a packed enough trail to ride easily. The busy open ski tracks were often much faster going, although falling off them resulted into being buried in deep powder.” ~Annie Le Evans 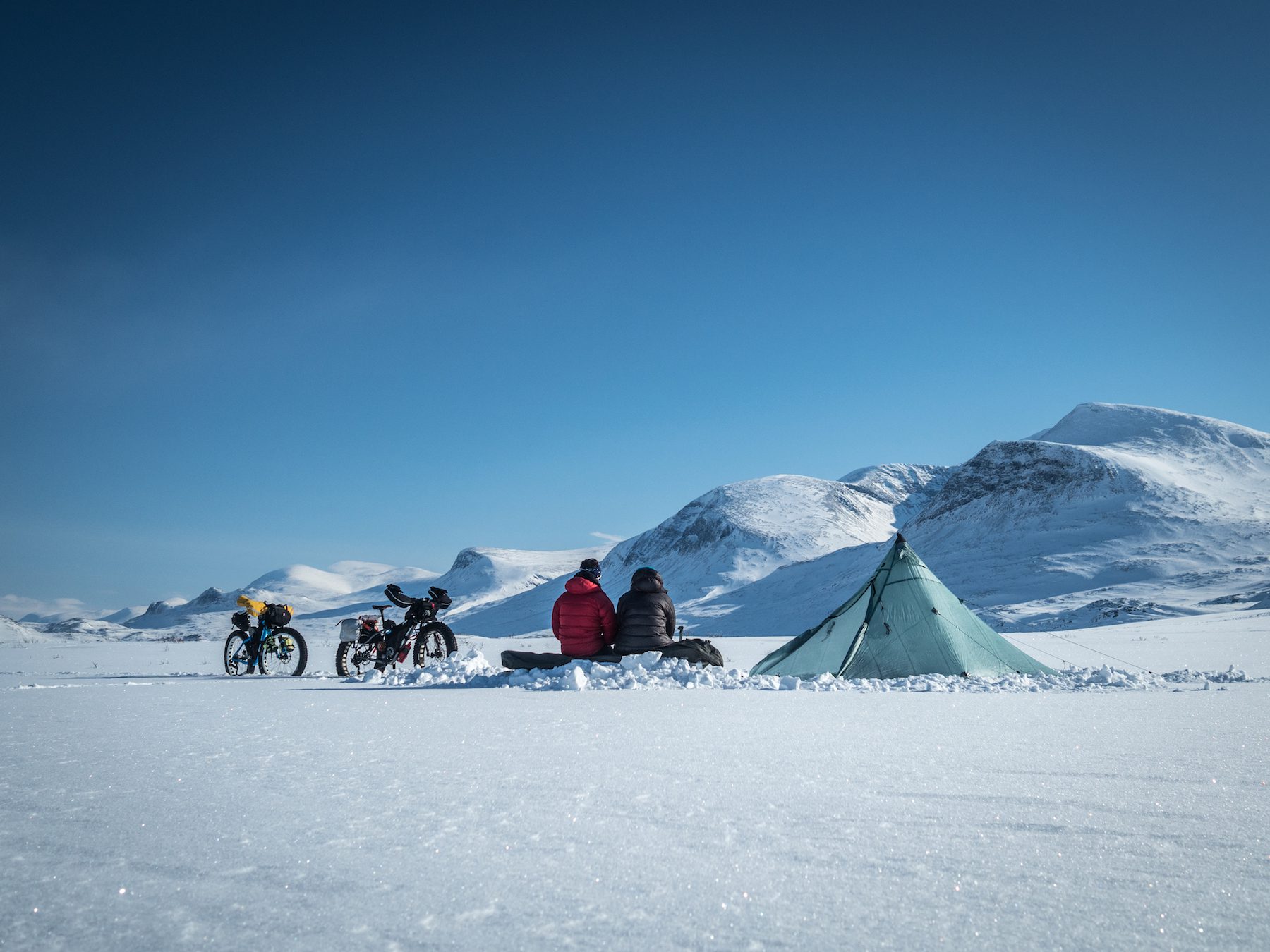 “We could have made it out of the hills, but stopped early to enjoy one final night under the stars at this campsite. Sometimes trips can be so full on that there never seems to be enough time to simply sit and absorb the surroundings. Here we knew bad weather would sweep in the following morning and we would have to make a quick get away, but for the rest of this afternoon we felt pure joy to just to relax, observe, and try and store the memory of this landscape forever.” ~Annie Le Evans 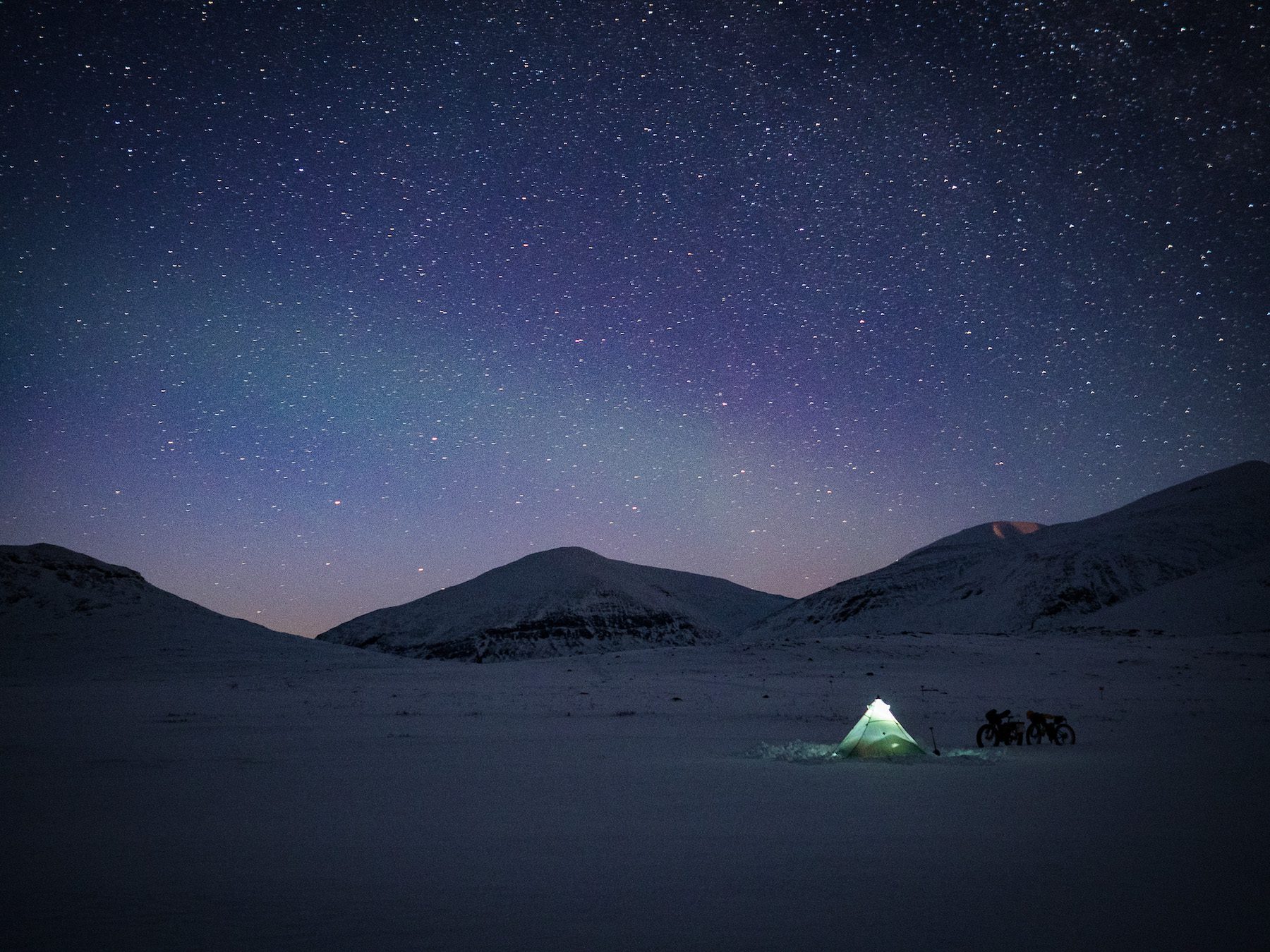 “Night times often make indelible impressions. Although we never saw the penetrating northern lights we saw in Iceland, we lay in the tent, cosy in a sleeping bag, gazing out as the stars pirouetted and the faint aurora danced above, whilst our breath tinkled and grew crystals around the sleeping bag hood. It was something incredibly special.” ~Annie Le Evans