Kurt Refsinder—A Endurance Racing Force to be Reckoned With

Kurt Refsnider at the finish of the AZTR 750 (left) and after setting the record on the AZTR 300 (right).

“Constellations rise above the horizon and arc overhead, and by the witching hours, the world becomes silent aside from the crunch of my tires on loose rock. By morning, that mountain range will be just a distant feature behind me, and I’ll find myself in some grassy valley countless transitions later, and as I pedal, I reflect on just how many times everything around (and within) me has changed since the prior morning. It’s experiencing all those transitions in such a short time that keeps me coming back to these races again and again.” ~Kurt Refsnider

Kurt Refsinder’s infatuation with endurance bicycle racing started early. At 13, he decided to train to “ride a century,” i.e. 100 miles in 12 hours. He bought a Panasonic road bike at a thrift shop for $100, rebuilt it with his dad’s help, and spent the next four months following a Bicycling Magazine training chart before riding 100 miles solo.

A few years later, Refsnider started racing mountain bikes and doing Nordic ski races in the winter, enjoying the growing independence he gleaned from those activities. Another decade later, while a graduate student, he started obsessing over cyclocross, spending “far too much time and money traveling to the biggest events around the country and trying to make a name for myself in that scene.”

When that didn’t work out as planned, (i.e. his name was still known to few, he says), Refsnider turned his attention to exploring old mining roads and little known trails of Colorado’s Front Range by mountain bike. And when he caught wind of the Grand Loop—a 360-mile ride in western Colorado through mountains and deserts—he immediately found his calling.

“I figured out how to carry enough gear on my bike for three days, did some big rides as training, and showed up at the start,” Refsinder explains. “Nervous, marginally prepared, and very excited, I managed to make it around the loop with ample suffering, swearing to never again try something like that.” 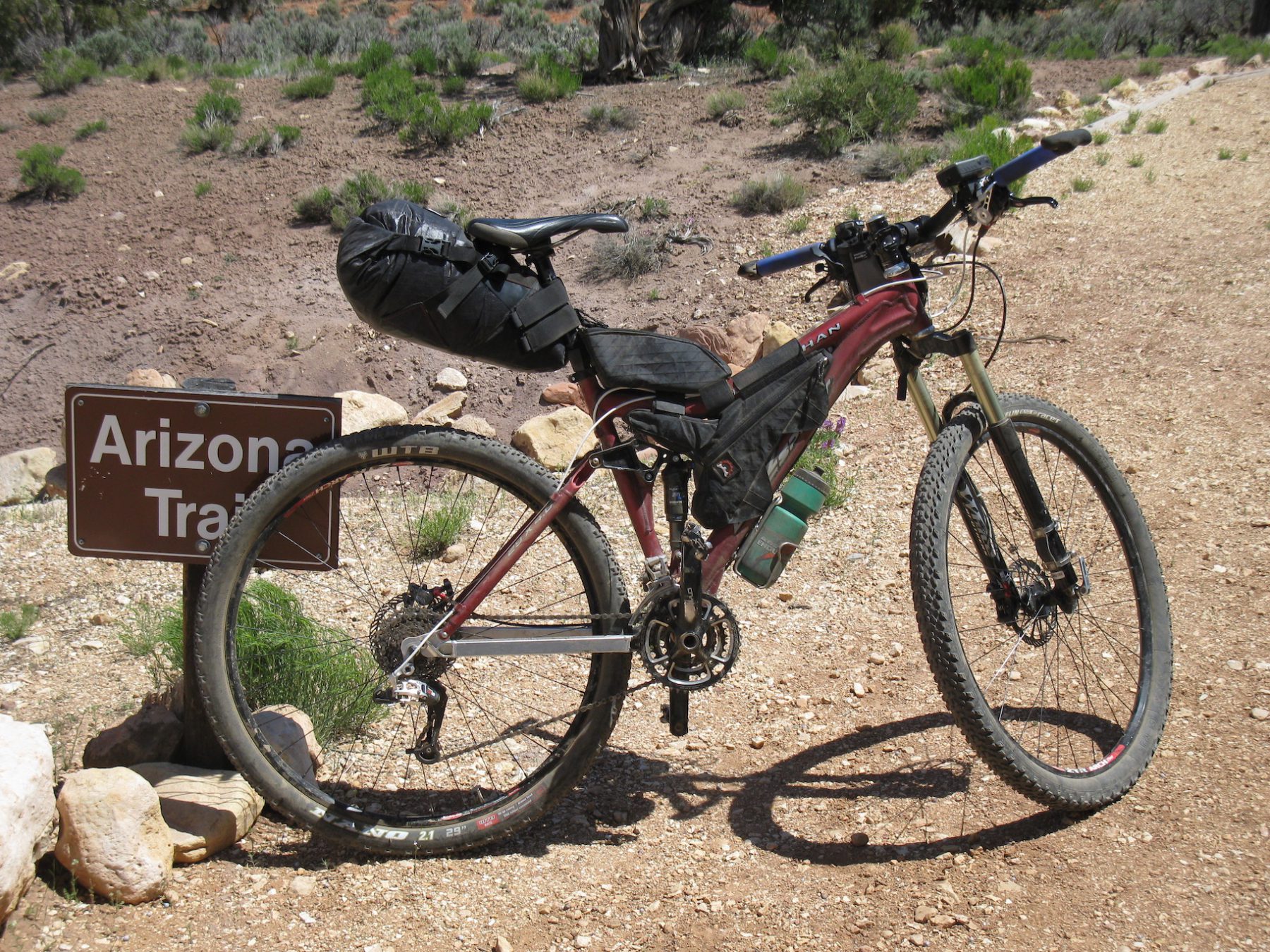 But like many obsessive athletes, his memories of Type II fun quickly faded, and mountain biking ultras hooked him completely.

Just one year later, in 2009, he raced the Arizona Trail 300, setting a new course record. He then took 2nd in Tour Divide. In subsequent years, Refsnider says, he built on those race experiences, learning how to become as efficient as possible by honing in on his training and sleep strategies.

“I’ve absolutely fallen in love with the challenges and rewards of this style of racing, discovering how I can keep myself in a positive headspace for nearly the duration of such events,” Refsnider says.

The combination of support from companies like Revelate Designs, Salsa Cycles and Pivot Cycles, along with acquiring an increasingly valuable skill set have allowed Refsnider to set some extremely fast times. He currently holds the record of 45 hours and seven minutes on the Arizona Trail Race (AZT) 300 and the record of six days, six hours, and six minutes (150:06) on the AZT 750, among others. Yow. 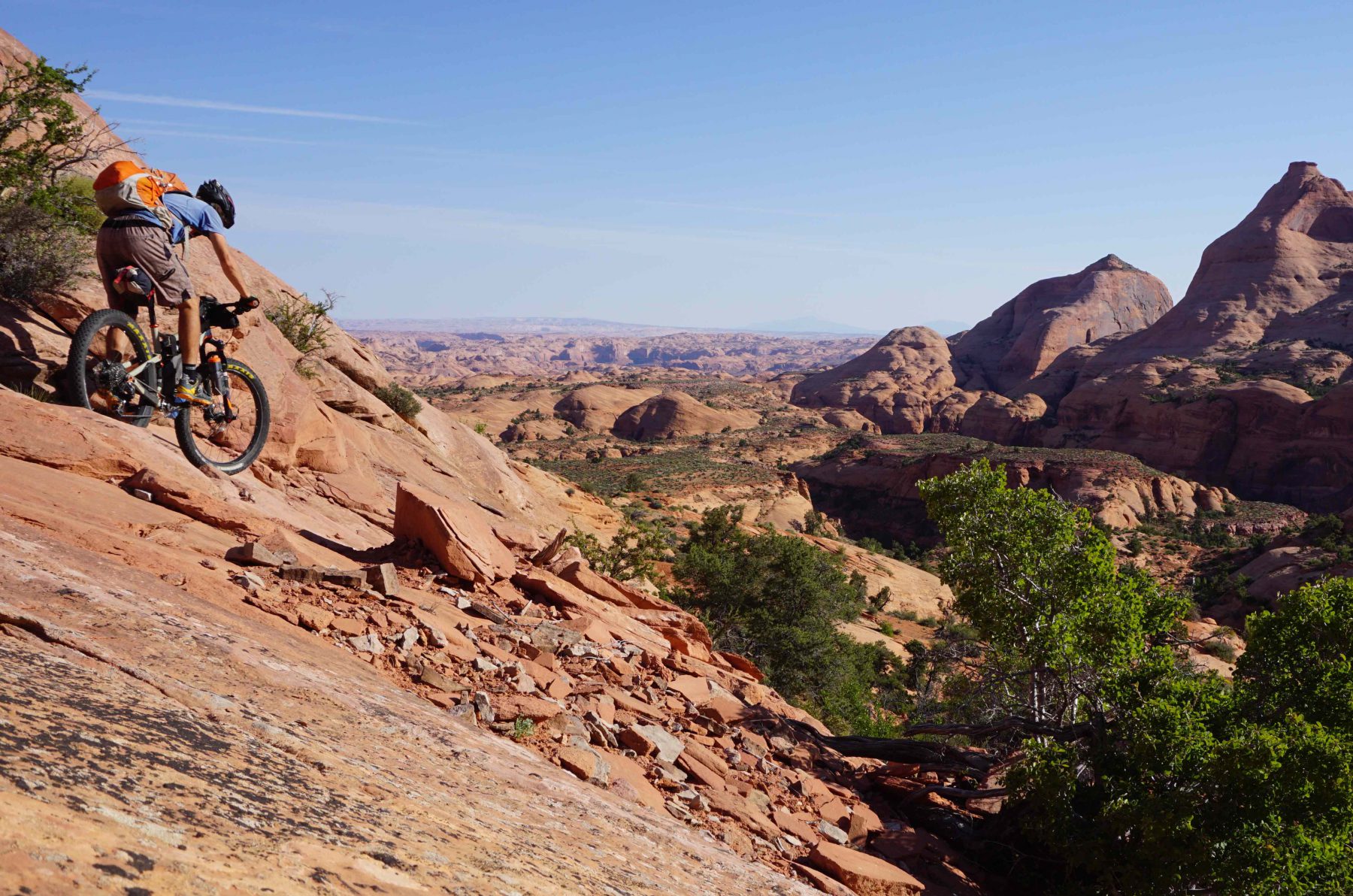 How Improved Gear Advanced the Sport of Enduro Racing

Refsnider started doing these races with a “very over-engineered” Ergon backpack in 2008. “I threw everything for an overnighter in there, spent the day riding, and oh boy did my butt and back hate me that evening,” he explains.

That didn’t last long. His next system was a sturdy Old Man Mountain rear rack, a drybag strapped to that, a small stuff sack strapped to his handlebars, a reasonable backpack, plus four water bottle cages mounted to his bike with hose clamps (something he still does on long desert trips today). He used that set up for the Grand Loop and some other short trips.

But then he discovered real bikepacking bags. “Revelate Designs’ pioneering bike bags really opened the door for me and for more riders to take their bikes into rugged country, opting to take trail rather than dirt roads,” he says. “And they could do so while still really enjoying the riding experience!”

While hearty souls took loaded bikes into the backcountry for more than a century, the bulk, weight, and awkwardness of panniers kept most of them from straying too far off decent dirt tracks. 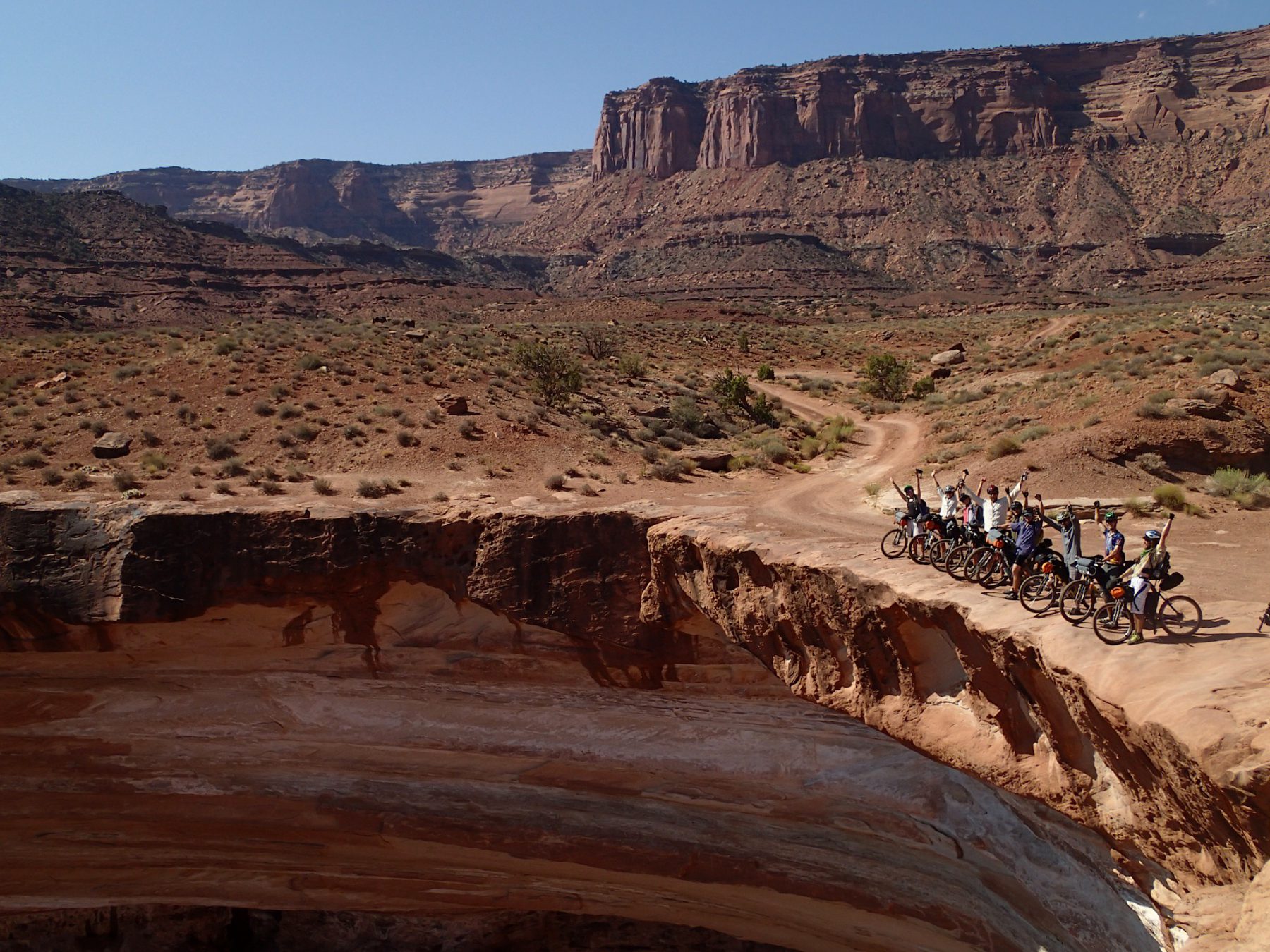 “With the advent of bikepacking-specific bags and ultralight camping gear, multi-day trips on trail and even carrying bikes into unrideable terrain has become commonplace!” Refsnider says. “From a racing perspective, these lighter, more svelte bags have facilitated riders being able to ride faster and more efficiently on rough and technical backcountry routes.”

Not only has the gear changed, says Refsnider, who now has 10 years endurance racing under his belt, but so has the sport itself. With better gear always comes increased involvement.

“On the one hand, it feels like little has changed–it’s still little more than one rider versus a tremendously daunting route, hundreds of miles of rugged terrain, traveling at the whim of the elements,” says Refsnider.

On the other hand, he adds, where there were once just three bikepacking ultras the Grand Loop, the Great Divide Mountain Race, and the Iditasport—now there are probably four dozen or more.

In some ways, he says, it feels like almost everything has changed.

“Bikes have gone from having 26” wheels, three chainrings, rim brakes, and bouncy suspension to being amazingly forgiving and capable machines,” he explains. “And bikepacking bags allow gear to be carried in a far more efficient and comfortable manner and allow loaded bikes to be ridden on trails that would have been far more challenging to ride with older setups.”

As well, he says, while the races are still huge adventures, much of the unknown has been removed as so much information about any route has become available on the Internet.

“From a competition perspective, we now see racers pushing limits more than ever, sleeping less, stopping less, and being inspired by ever-lowering bars,” Refsnider says.

Plus, race records in the oldest ultras are now lower than anyone would have thought possible a decade ago, and we can now see how those times will drop further. The strongest women now challenge the strongest men more regularly, something he predicts we’ll see much more of in the coming years. 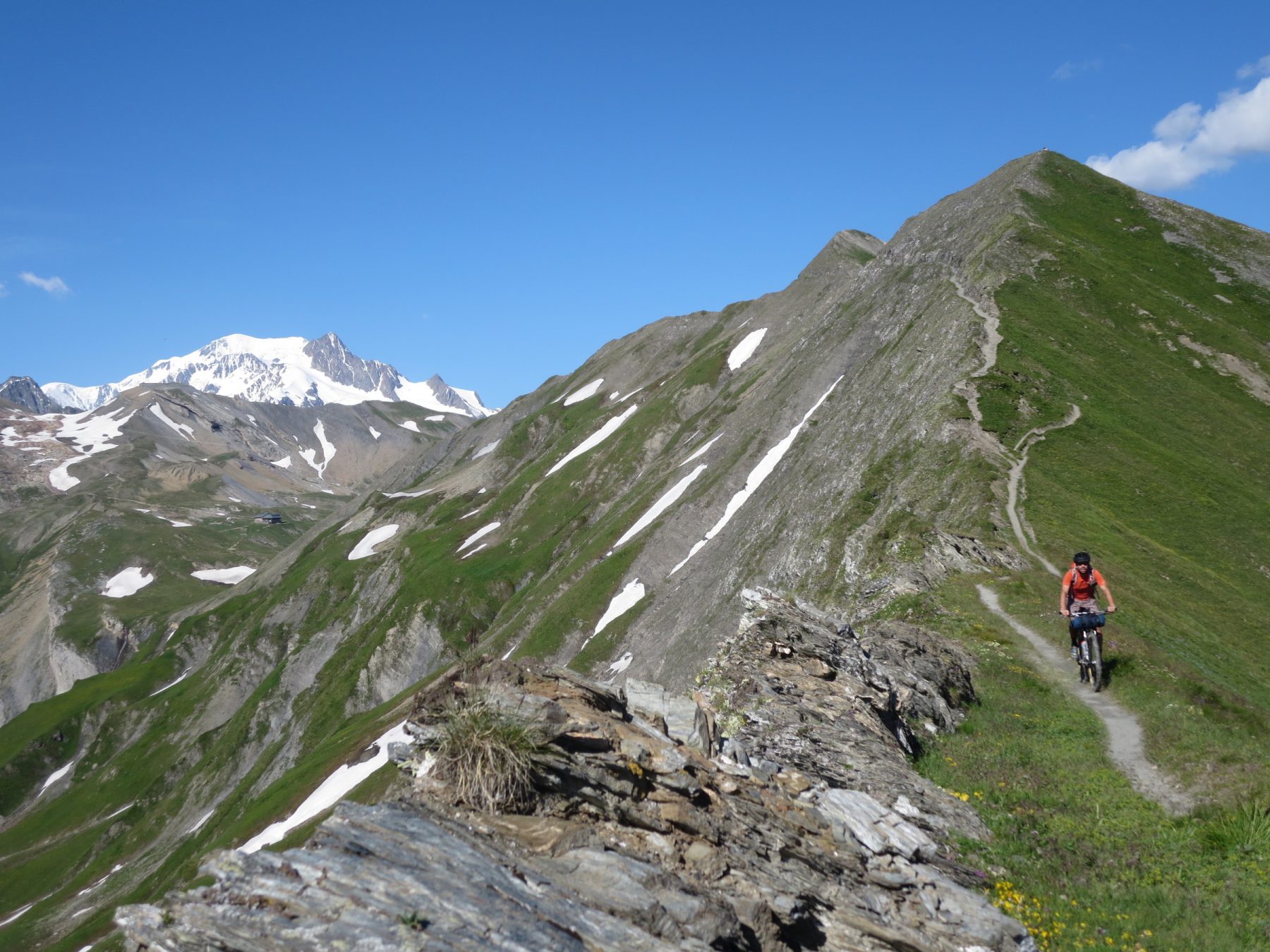 In the Alps. Photo by Kaitlyn Boyle.

So what continues to inspire Refsnider to race mountain bike ultras? Numerous things. He loves being immersed in wild country, pushing his own limits, and the simplicity of merely having to continue moving forward all day and for most of the night.

“But I think my favorite element may have something to do with experiencing transitions–transitions in landscape, light, emotions, climate, ecology, communities, awareness, and more,” he adds. “The only thing that remains static in these races is the fact that I’m sitting on my saddle pedaling (or perhaps walking next to my bike pushing). Conversely, everything both within me and around me is changing.”

Transitions from one notable element to another have always fascinated him, from watching a mountain range getting closer to leaving well-traveled roads and ascending into cooler, lusher elevations on rough trails.

“My mood likely droops under the weight of strain of all the hours I’ve already been pedaling that day coupled with a steep ascent,” he says. “But the bright afternoon sky morphs into one saturated in evening colors, and as I begin descending (and grinning as my mood rebounds) over the back of the range, night falls.”

Then there are the damp air smells rich, and when insects begin a chorus, and his legs hammering a steady rhythm, the constellations, the silent world, and more.

And, he feels lucky not just because he gets to have these experiences himself; he also gets to share them with others. After finishing graduate school, he found himself teaching at Prescott College, “a funky little school in Arizona with a reputation for experiential and field-based learning.” 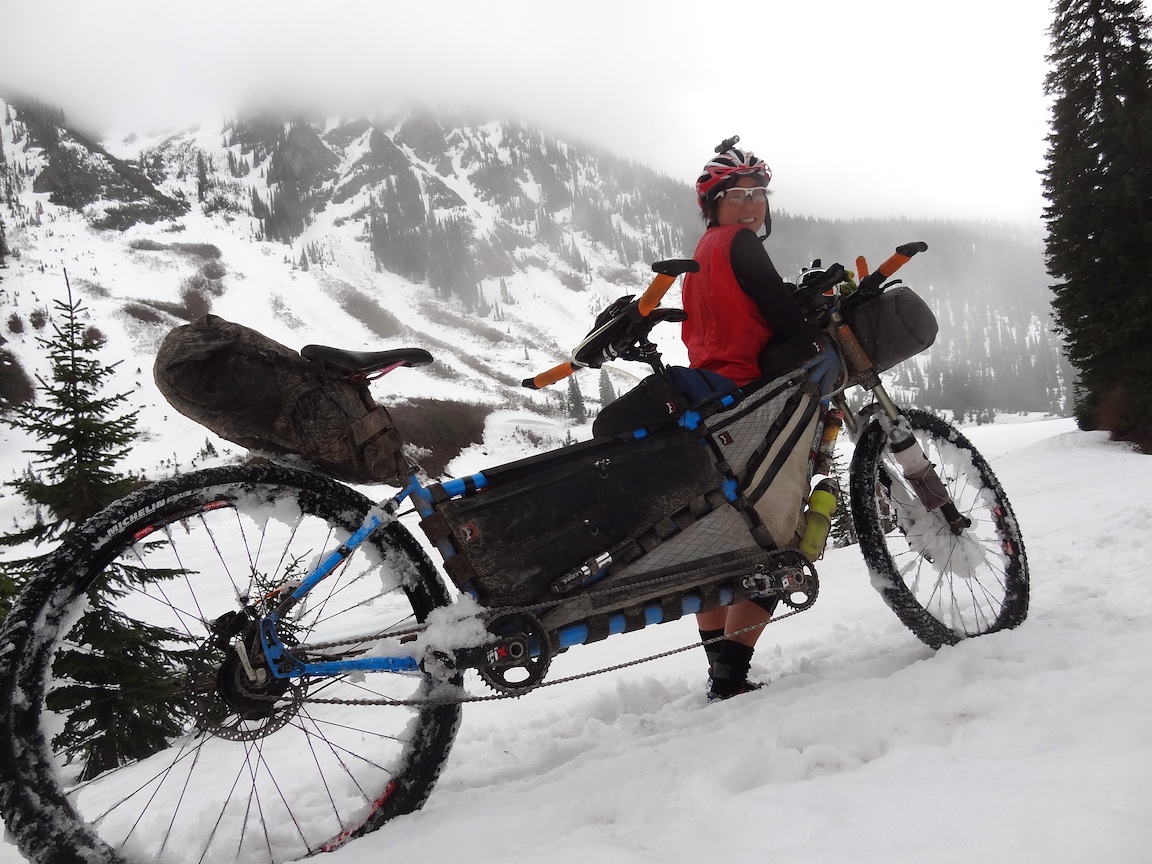 Doing the Tour Divide tandem in 2012.

There, he had the opportunity to integrate his passion for bikepacking into a college level class. He and Adventure Education Instructor Kaitlyn Boyle co-developed a new course called Geology through Bikepacking.

“We designed a four-week progression that explored the geologic history of the Colorado Plateau region by bike through four different multi-day mountain bike trips,” Refsnider says.

With Revelate Designs outfitting the student’s with a proper bikepacking bag setup, the duo led the students through a progression of increasingly challenging trips as they also learned about leading and facilitating group experiences that involved bike travel.

“The rather daunting first edition of the course was a huge success, he says, “and we have since offered the course two more times.”

All those experiences combined keep Refsnider returning to the trail again and again. 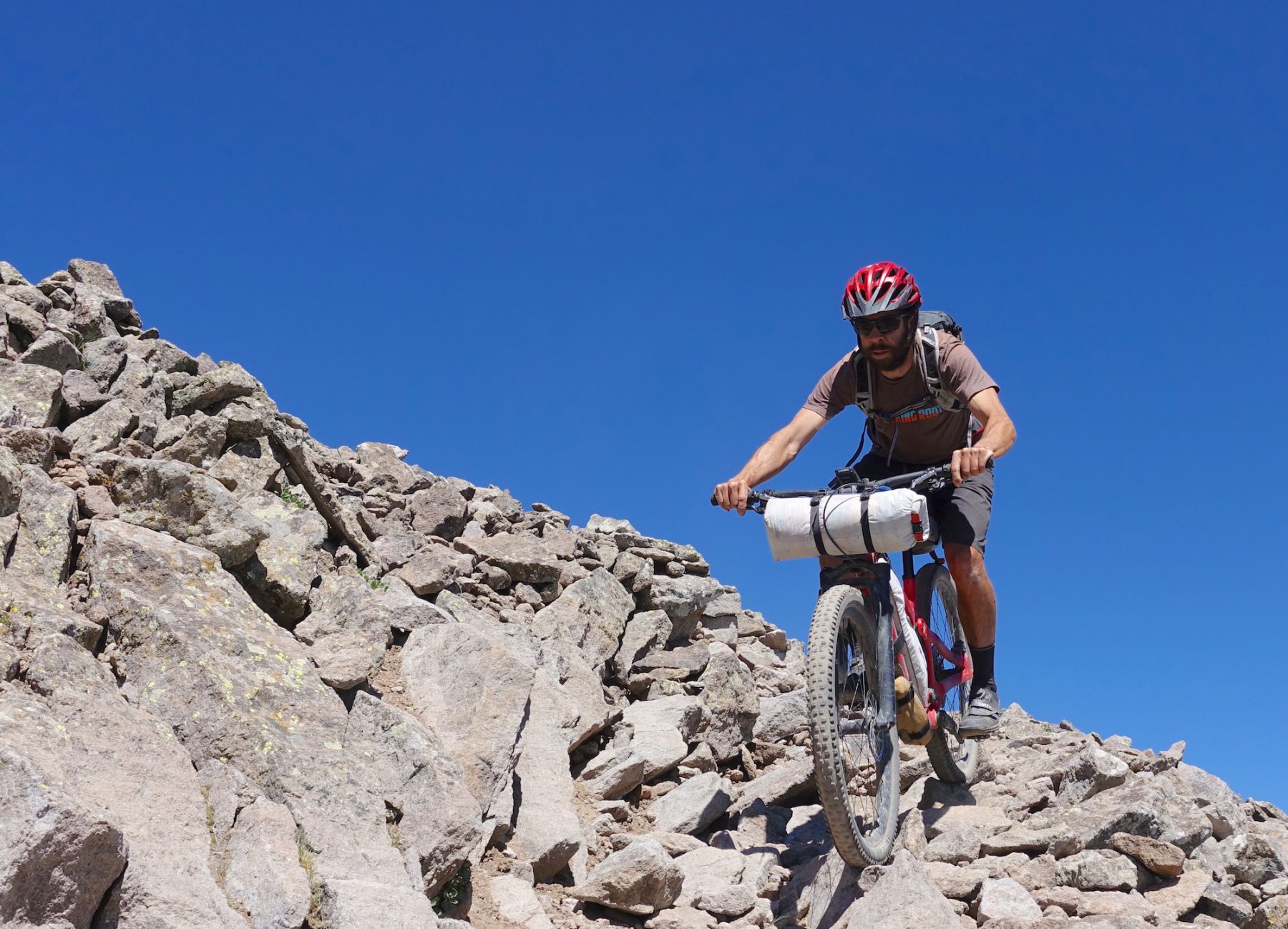 Refsnider in the Rocky Mountains. Photo by Elizabeth Sampey.

Hands down, his favorite Revelate bags are the Vole dropper-post seat bag and the Saltyroll handlebar bag.

“I run dropper posts on all three of my bikes, and having a svelte little bag like the Vole makes the droppers useable for me, even on my full-suspension bikes, and is rock solid on rough terrain,” he explains.

“And in a world of so much outdoor gear that claims to be waterproof but really isn’t, the Saltyroll has done just the opposite and kept my most precious down items completely dry on some of the wettest trips I’ve ever done,” he explains. “For that I am very grateful.”