Posted by Huw Oliver in Products

The 2018 Highland Trail got a little too exciting for me, and in the end wasn’t a completion, although it had nothing to do with my gear choices. I do like to indulge in a little gear nerding from time to time, and optimizing my kit for this year gave me something to think about in the months leading up to May. At the end of the day, it’s stronger legs that make you move faster during a race, but gear choices play their part in allowing your body to do its best, and it gave me something tangible to chew on.

I was pleased with my choices last year, but we can always learn and improve, and this year I felt like I had my bike totally dialed in for the way I like to ride, even if my stomach had other ideas, so I’ve listed what I used and why here. If you’re of a mind to come to Scotland for a Highland freak-out in 2019, then let your gear geekery start here! 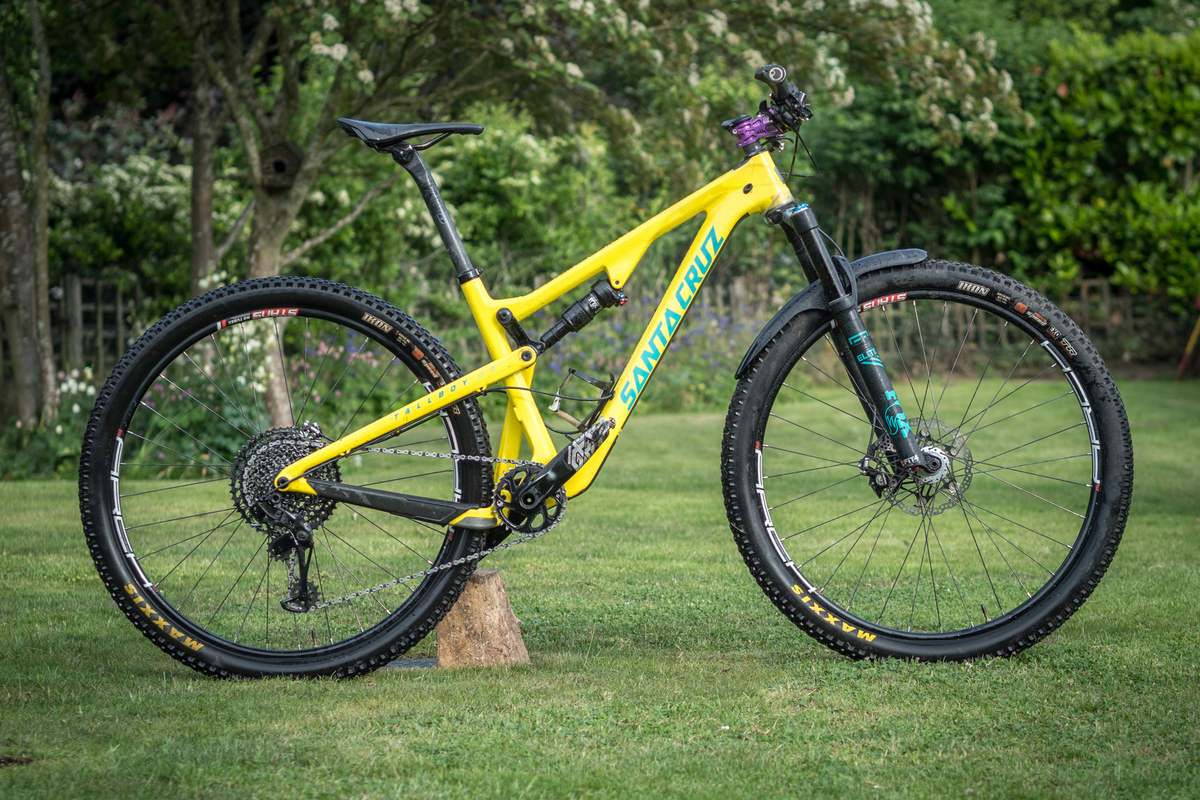 I love this bike. I’ve been riding it for around 18 months now, and it just gets better and better. It covers the whole spectrum of riding styles that appeal to me, from endurance events like the Highland Trail through to the gnadgiest, steepest trails I’ve ridden. Its own capabilities far exceed my own, and the pedalling position is a great match for my own ideas of being comfortable. As well as being super composed over technical terrain, the VPP system is effectively a rigid anyway on more pedally sections. I don’t think you could take a better bike on the Highland Trail, and every year I wonder why so many riders line up on rigids. Maybe I’m just soft. 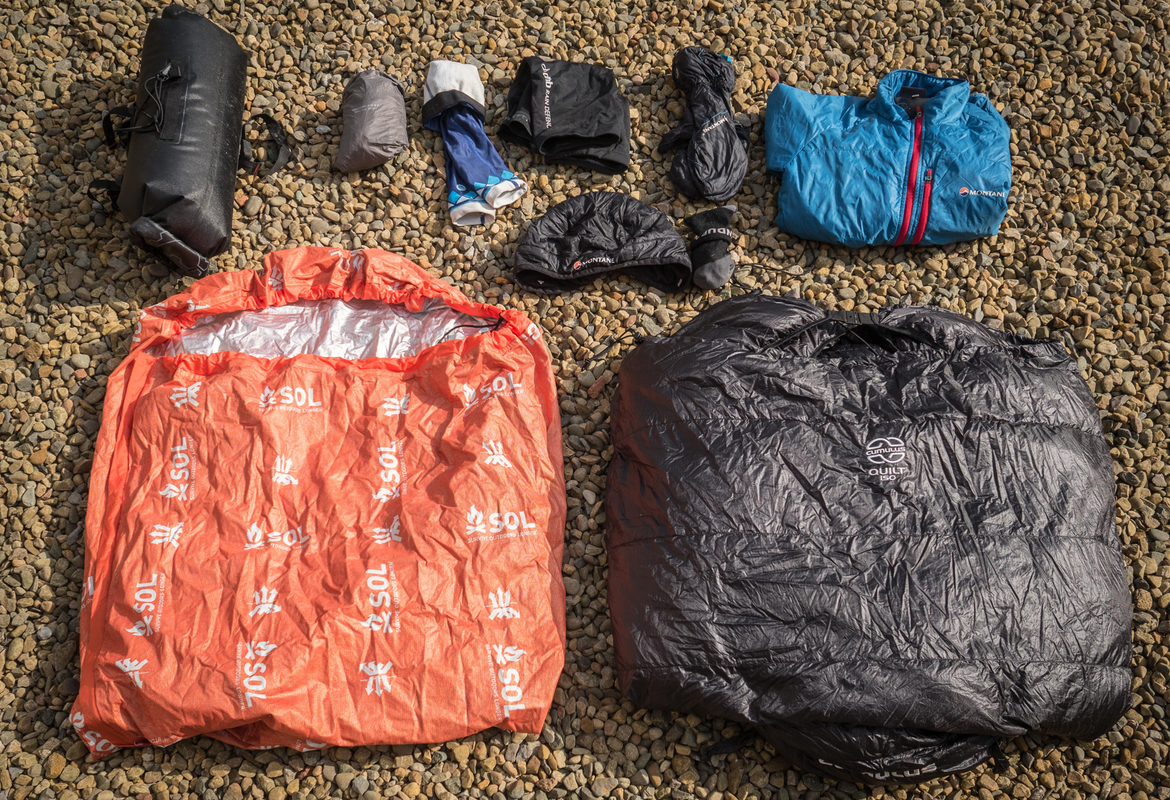 I used a size small Sweetroll this time around, as I needed a lot less volume than last time around, and the smaller roll kept the front end of the bike really nice and neat. The simple drybag-harness system is obviously light, and the fact that I didn’t have that much kit allowed me to unpack and repack the bag quickly while just keeping it on the bike. 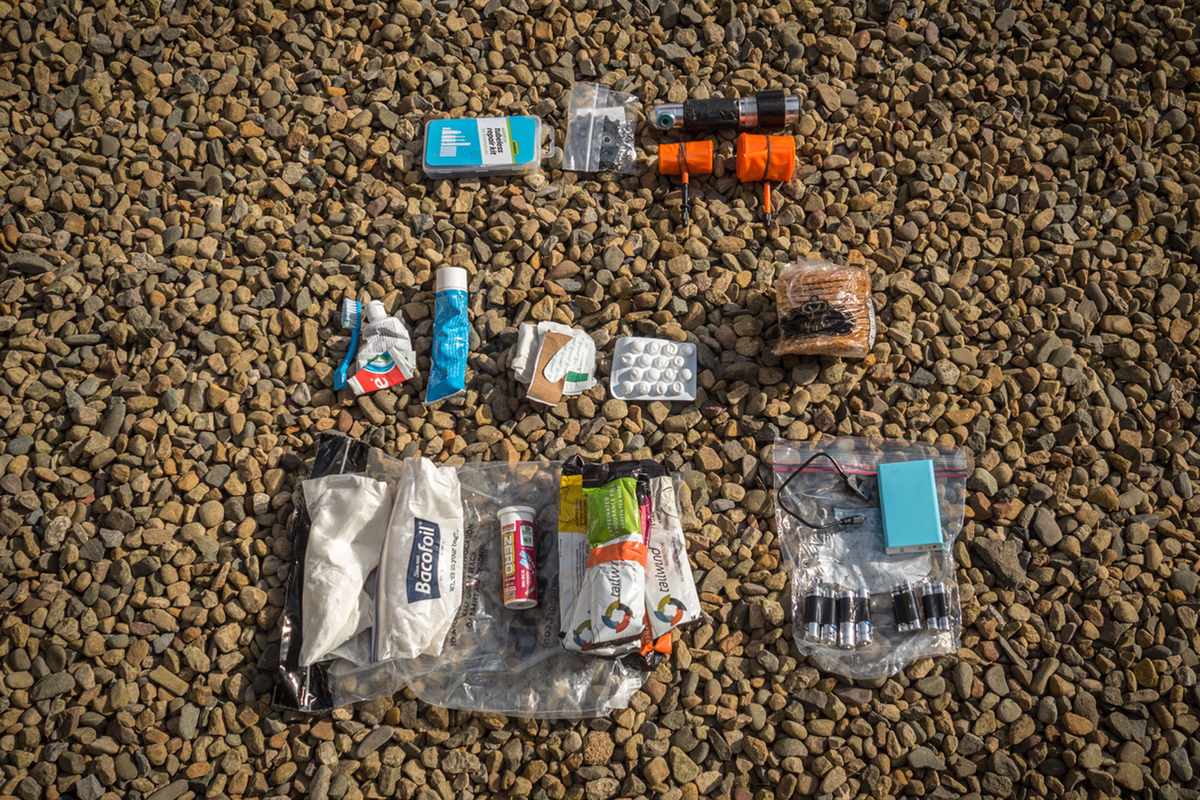 I LOVE the Vole. In hindsight, I’ve been waiting for this bag to exist for a little while, but it was worth the wait because the refinement and careful thought that have gone into it is obvious. The skid plate on the underside means that there is a rigid element enclosing the bag on all four sides, which I think makes it behave almost like a holster to keep its shape when packed with odd things or when run almost empty. It’s also got an enormous range of usable volumes, which is spot on for racing, and it served to carry a range of items while also being my surplus food silo between resupplies. Lastly, it’s by far the most stable seat bag I’ve ever used – when cinched down it’s solid. 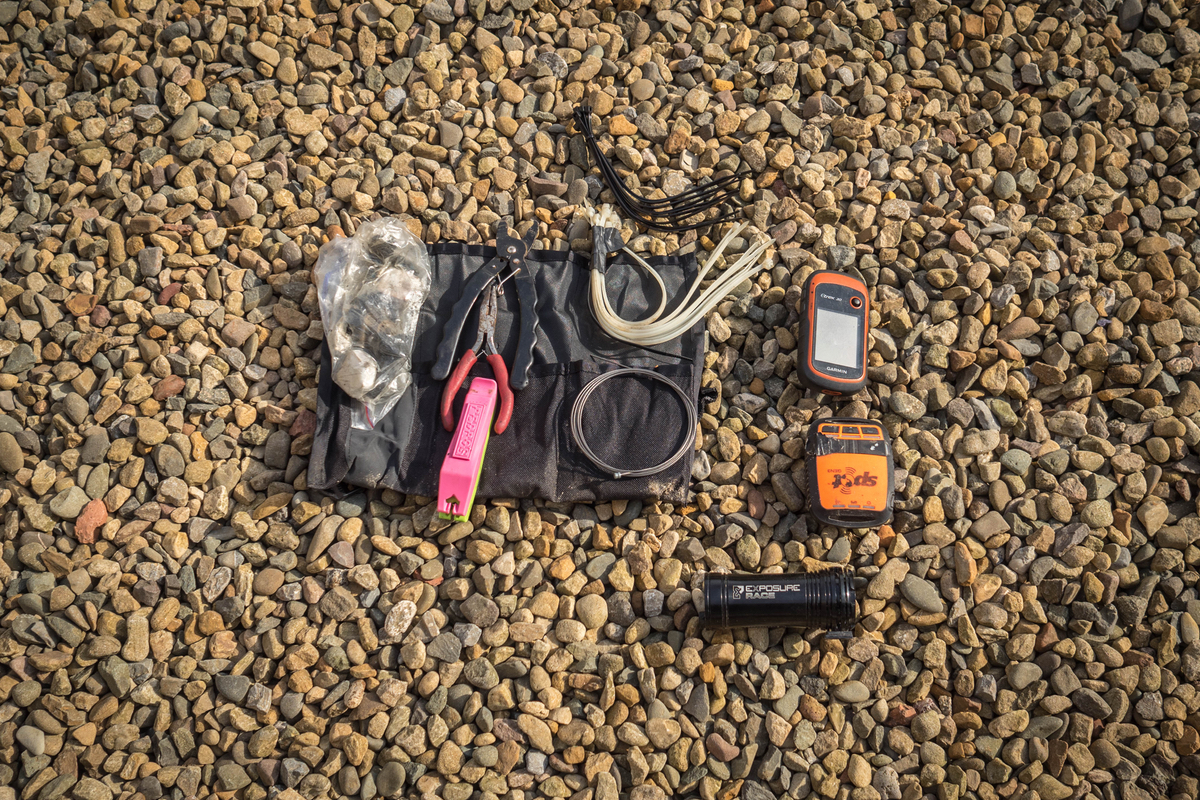 On the bars were a Garmin eTrex and Exposure Race light, with my SPOT tracker on my top tube (where it did a fairly poor job of transmitting my location, apparently).

I kept tools and spares fairly minimal, but did carry a spare for every bolt on the bike, plus valve core and basically enough to repair all the problems I’d actually experienced in real life whether personally or in a guiding situation. Example: those bolts that hold your jockey wheels in are actually very specific, and a spare weighs a couple of grams. I have seen one disappear mid-ride on a client’s bike before…. I had my tool roll strapped up and hidden at the front of the front triangle. If I had a frame bag (and that’s perhaps the only thing I would change about this setup) then it would have lived at the bottom of that, but as it was this method kept heavy things on the frame, and the Washboard straps kept it solidly in place.

I would usually use just one 750ml bottle (not pictured), but due to the heat and dryness in May, I took an extra 500ml bottle in a feed bag beside the stem. It was enough, as plenty of streams were still running, but I had to refill every couple of hours. 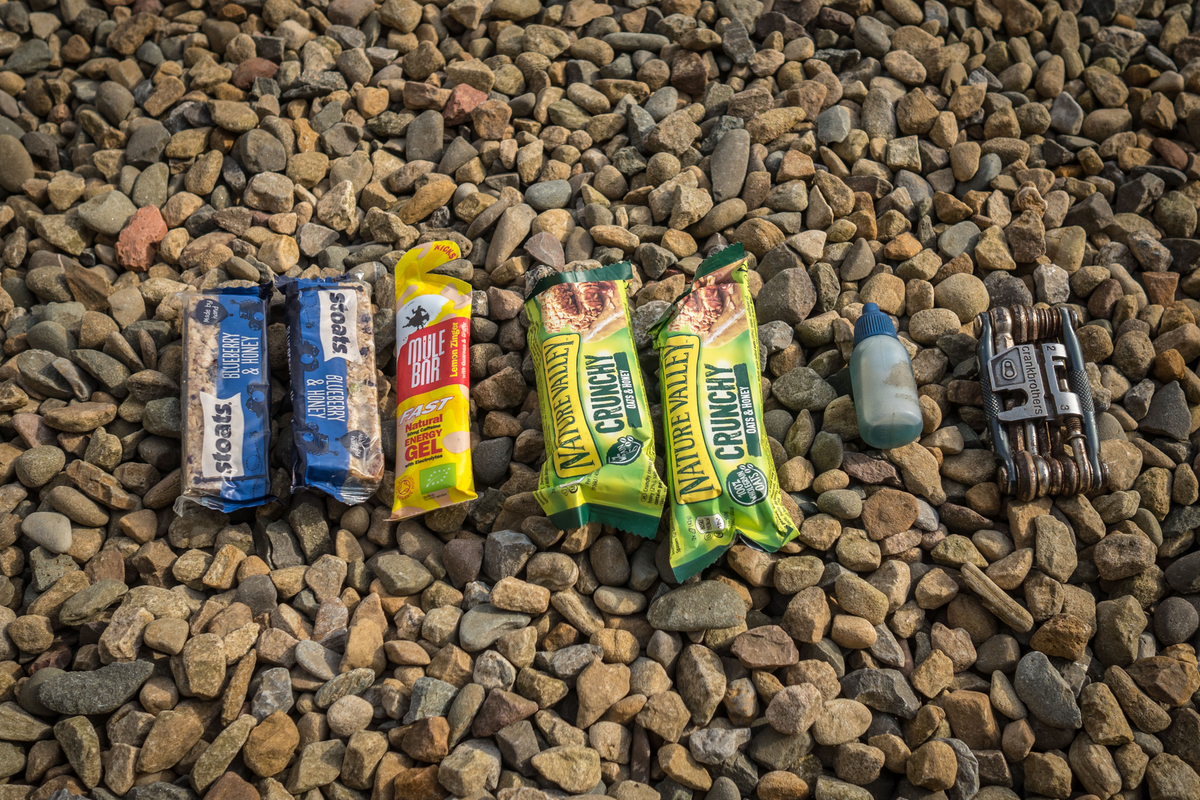 Snacks, multi-tool and chain lube I kept in my Revelate Designs Mag-Tank 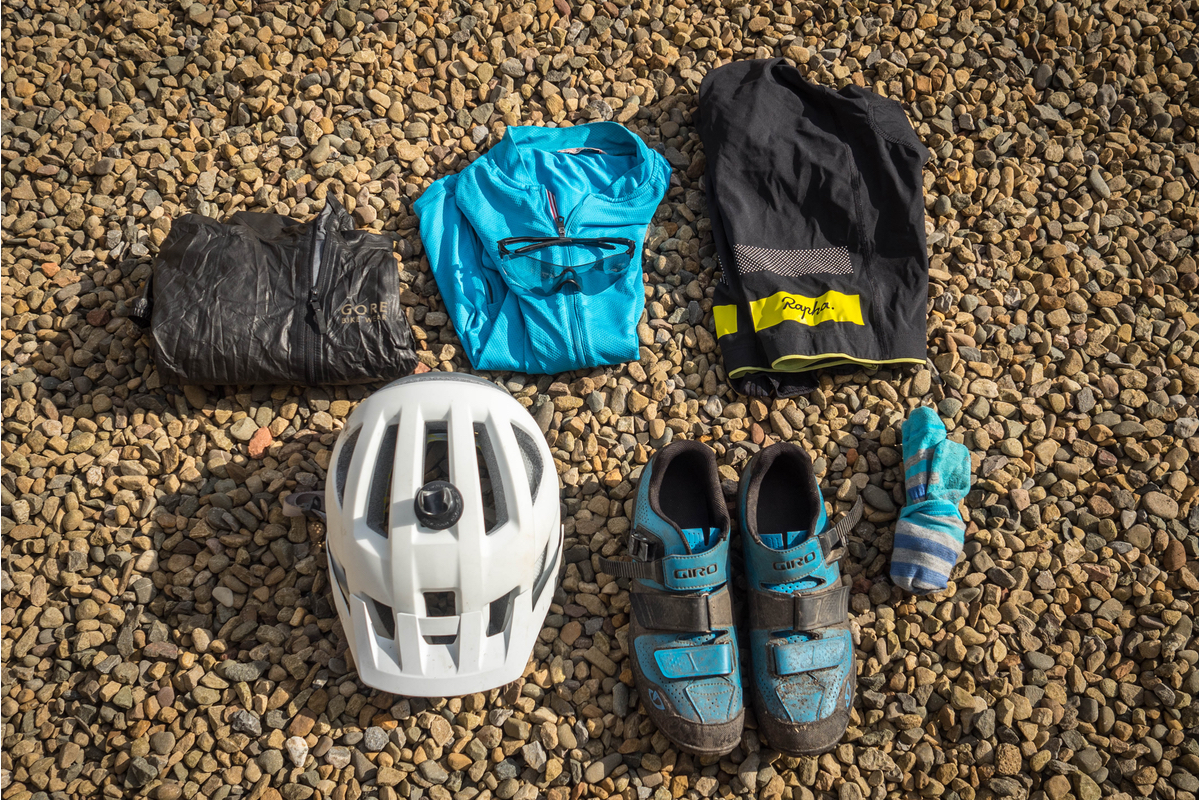 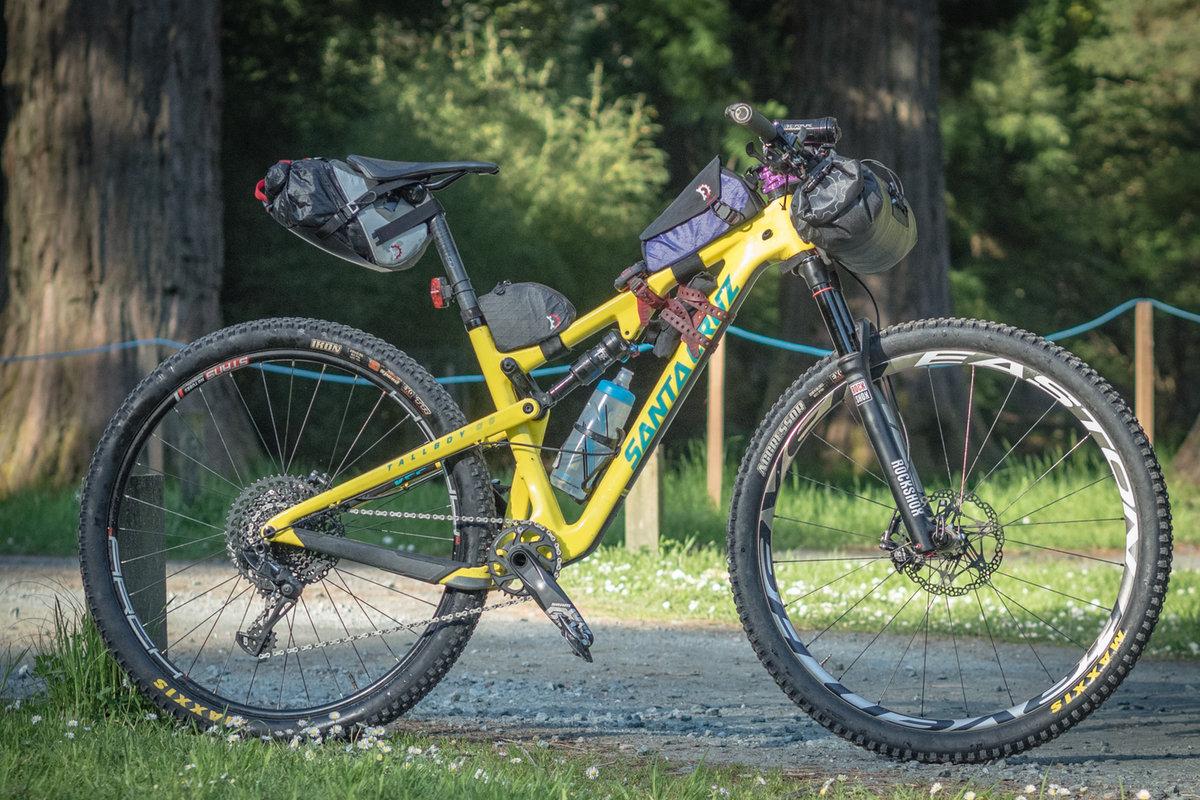 So there you go. Less is more, and by my reckoning I was carrying about a kilo less than I did last year. I think the sleep system is as light as I could go in Scotland – I very nearly left the quilt behind as the forecast was so warm, but on the one night I did spend out on the trail a sea fog came in and it was pretty cold, so I was glad I chucked it in.

The food capacity I had for resupplies was ideal as well. The schedule I had in mind involved doing 2 stints of 24 hours between restocks, and until the point that I got ill that was working fine. Being able to put extra food in the vole rather than in jersey pockets was a nice improvement over 2017’s very warm pocket-based egg sandwiches.

A bike that’s packed neatly tends to ride a lot better, and the bags I used this time around allowed a bike that rode really nicely when loaded, especially due to the stable and collapsible/expandable seat bag. Like I said, the only thing I would change in future would be to explore the possibility of a frame bag – in the past I had always assumed that using the front triangle for just a bottle would be fine, but having seen other setups making good use of a bag on full-suspension frames, I could be convinced…

You can follow Huw on more adventures through Scotland and beyond at his blog Topofests.

Huw’s favorite thing to read is a map – when he moved across the border to Scotland, the first thing he did was buy one. Bikes are a good way to check that the map wasn’t lying, and the resulting trips have taken him to nearly every bog in Scotland, to Patagonia, Nepal and Arctic Lapland. The odd bikepacking race thrown in for good measure keeps him honest. More recently, the addition of a packraft meant that even the blue bits of the map are fair game! Occasionally, he works as an outdoor educator and mountain bike coach, hoping to show other people why they ought to read more maps, too. His blog is Topofests.com.