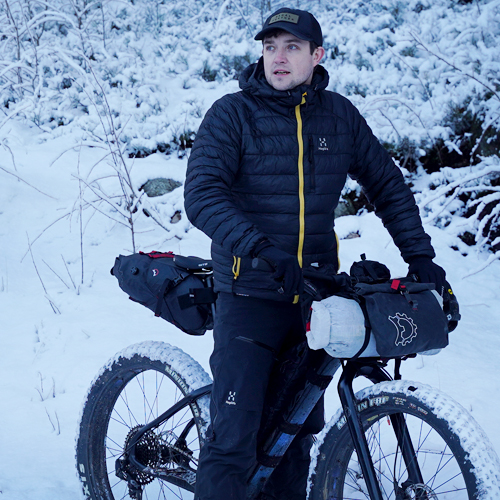 Decisions on the Ice

To dare to cycle on fresh ice you need to know how to read the signs. You need to test and make sure about what you want to do and that where you want to ride is safe. If it’s not and you break through the surface it could end up being a fatal mistake. Here is my story. 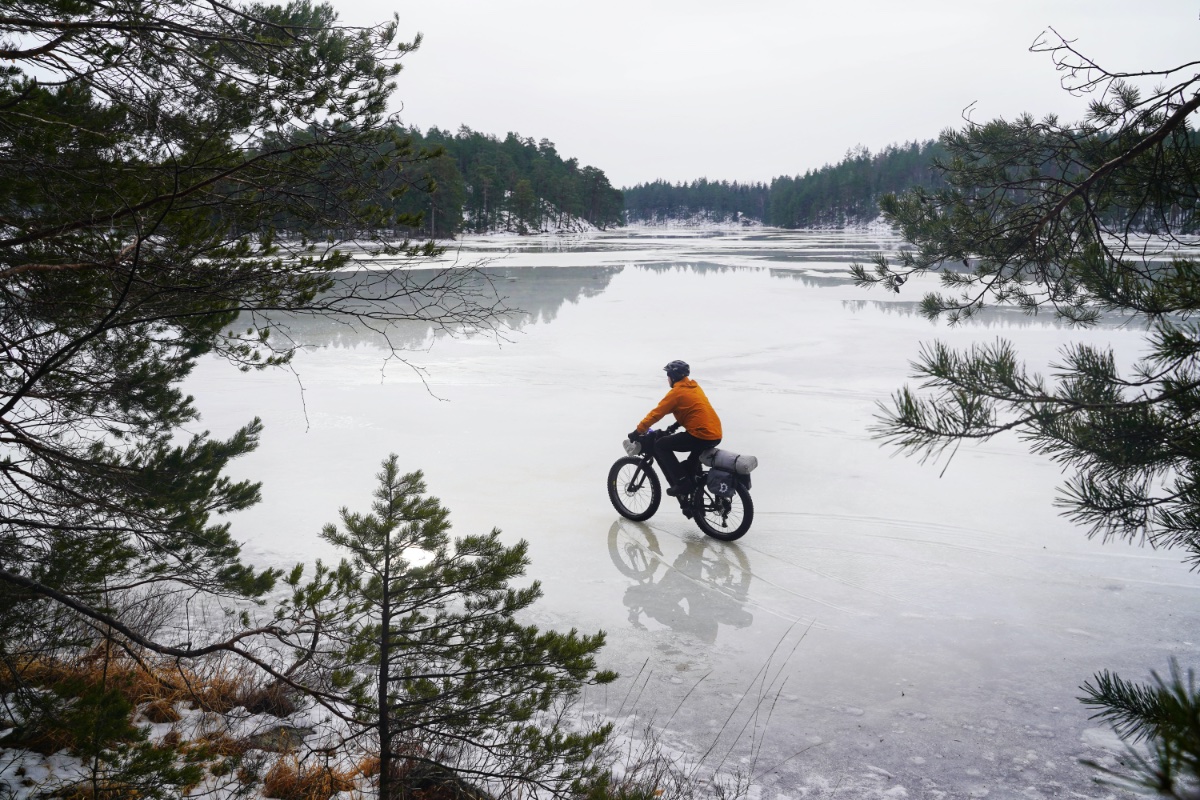 When planning an adventure, watching the weather forecast becomes an obsession. I had been waiting for the winter to arrive so I could use my fat bike again. I wanted to remind myself of the feeling of rubber gliding over frozen lakes and remember the crunch as you ride over snow and ice.  I biked several kilometers to the snow covered lake and to the start of my adventure. Looking for signs I tried to build up a picture of how the ice had formed. Was there a complete blanket of snow covering the entire lake? Were there any wet patches on the snow? Was the snow smooth or could I see gaps in it? I looked for a suitable place to start my testing. 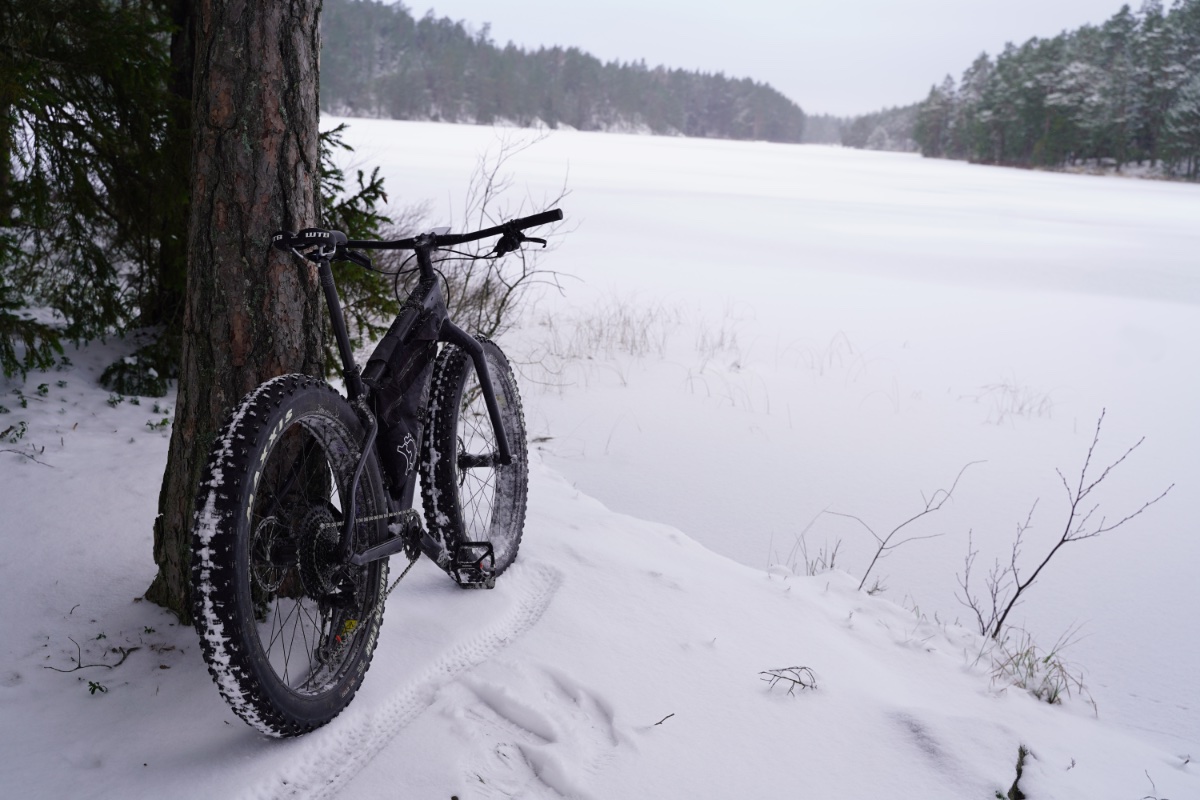 I choose a spot away from reeds, a place where the ice had formed evenly at the edge and where it hadn’t lifted or shattered. Leaving my bike at a safe distance back I sat down on the land and tried to smash my heel through the surface of the ice. It was solid. Next, I held onto a very secure branch on a nearby tree and I applied a little pressure on the ice and listened to see if there were any cracking sounds. None.

Still on land I reached out and cleared the snow off the surface. It was nearly black ice. Black ice means the water froze without any snow on the surface. Just extremely cold temperatures. If I had arrived at the lake a few days earlier maybe the entire surface would have been black. Perfect for skating ice but slippery as hell and not for riding on without studded tyres. If the snow falls on the ice at the wrong temperature it will just disguise the slippiness. It would be just a veil covering the frictionless surface. This ice had a little snow mixed in the original ice which added texture allowing the new snow to bond to it and give perfect grip. 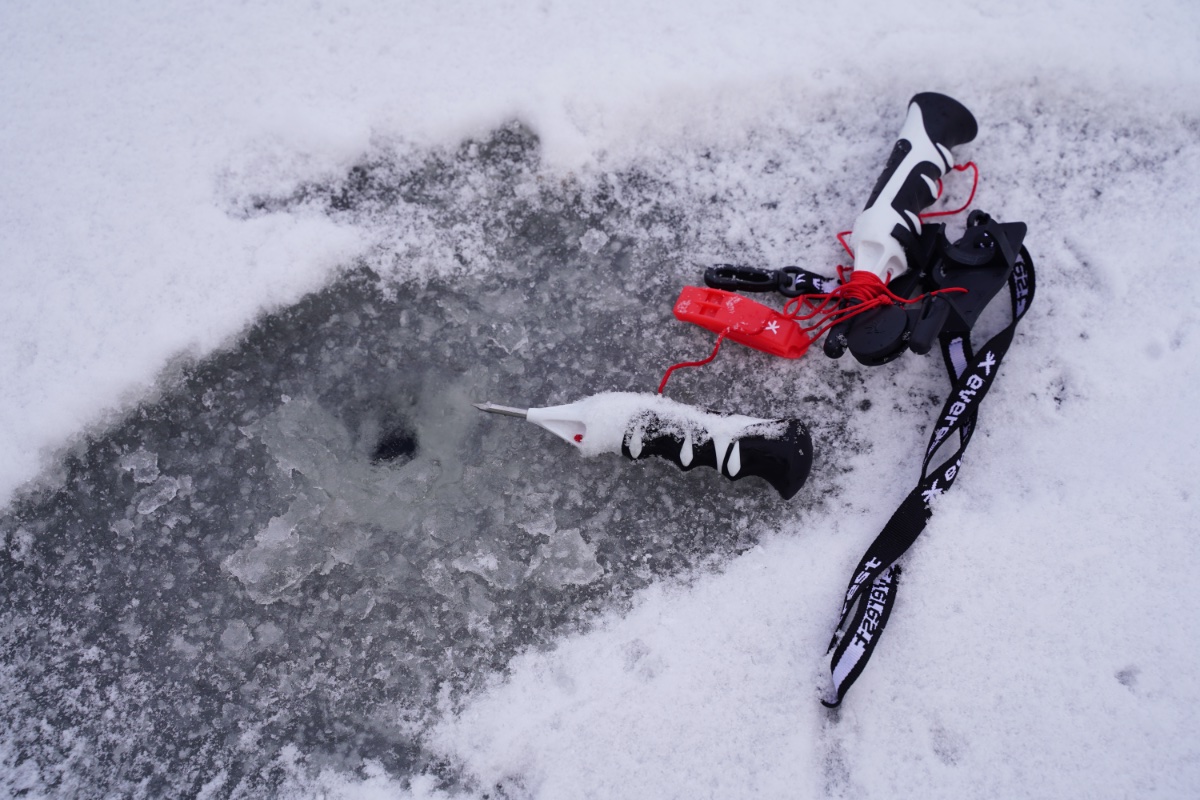 With the fresh snow cleared I used my ice studs to start trying to smash through and measure how thick the ice was. Ice studs look like the handles of a ski or walking pole with a 2cm nail sticking out of the bottom. They are worn as part of a simple harness hanging on the back of your neck. The idea is if you fall through you can use these easily accessible spikes to help climb back onto the surface of the ice. Or in this case, using them to create a hole.

I stabbed several times until I eventually broke through. With the hole big enough I was able to reach through to use my fingers to pinch the ice. It was about 10cm thick. In nordic use experienced skates will skate on as little as 6cm of fresh water ice. Less if it’s sea ice as the salt in the water gives the ice a little more flexibility, hence can hold weight when a little thinner. I won’t skate on fresh water ice unless it is at least 8cm. I’m cautious. This was 10cm. Walking onto the ice I made a second test a few meters out. The same. I felt confident. 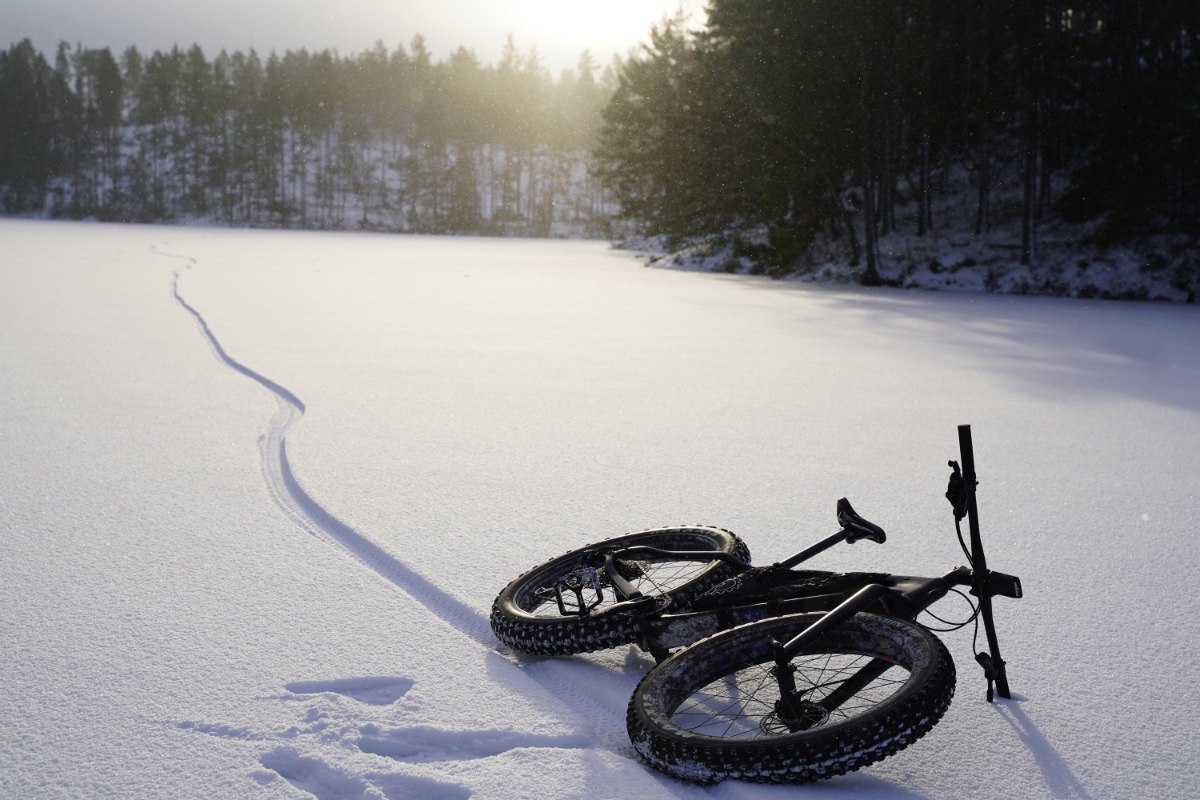 Riding on perfectly bonded snow and ice makes you feel like you’re flying. Smooth and effortless and had me grinning from ear to ear. But then the sounds began. Faint at first but the further from the land I got the louder they grew. Erry cracking, like dinner plates being slowly snapped one at a time. I sped up in a panic and headed to the closest piece of land, an island in the middle of the lake.

Panting, I rammed my bike up onto the shore grateful for the safety. I was a bit confused as to why the ice got weaker. I tested again, smashing through the ice from the safety of the land. 7cm. How could that be? It had been minus 10 degrees celsius for the past few days and, in fact, I had thought the ice should have been even thicker from the start. But due to the recent snowfall before the drop in the temperature the ice had actually been insulated from the cold by the snow and therefore had not continued to form at the rate I expected.

On this island I knew where I was. I’d been to the lake many times before packrafting and camping with my kids. On the other side of the island from where I was I knew it wasn’t so far to the northern edge of the lake. Maybe the ice would be thicker there. It wasn’t. The magnitude of my situation was dawning on me. I began searching my mind for options. Too scared to cycle back the way I came, could I wait til dark and hope the falling temperature would make the ice more secure? But if I broke through I would be in an even worse situation trying to self rescue in the dark with no light or head torch. With colder temperatures my chance of survival would be even lower. How could I be so stupid? I had forgotten the first and most important rule: never go on the ice alone. 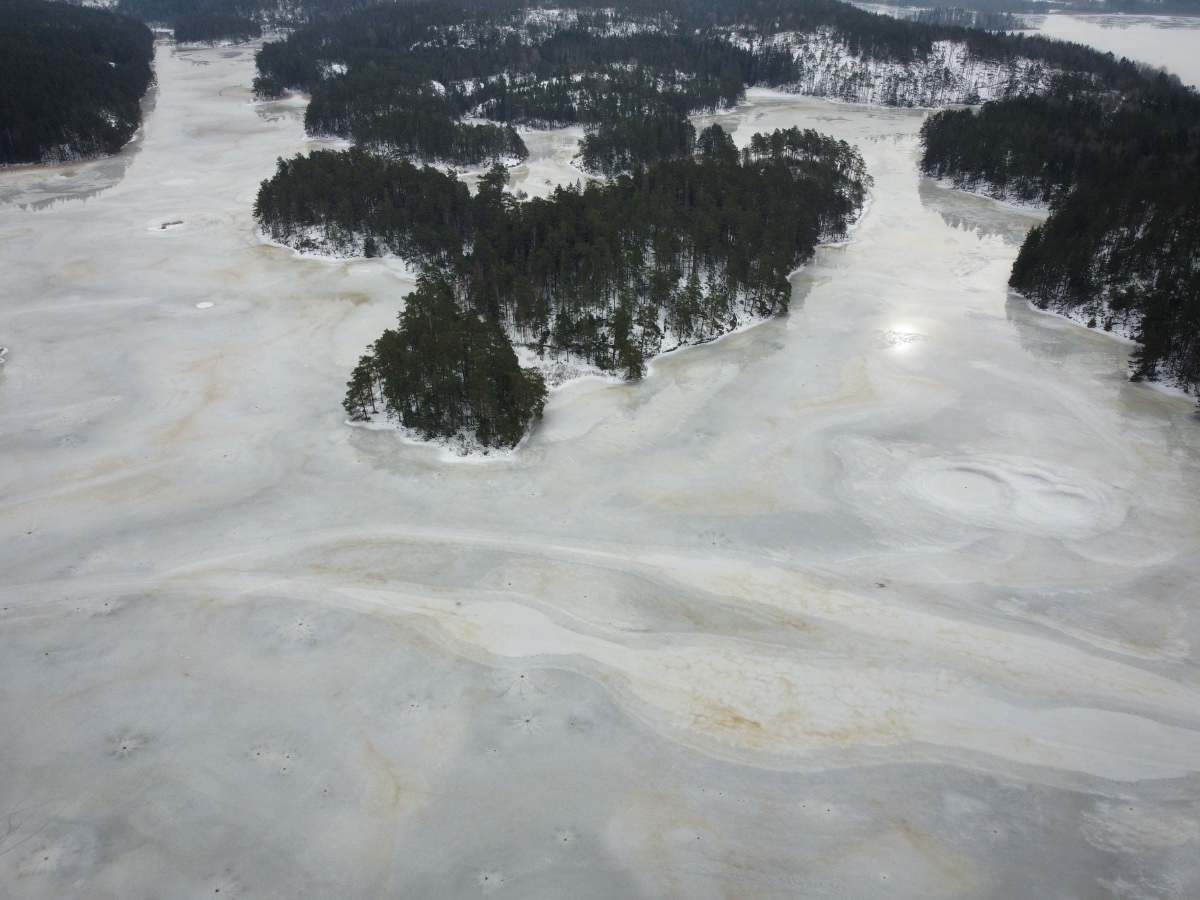 They say that the last thing to die in a human is hope. Scared but I hadn’t given up hope I began circumnavigating the island. It was best to check the ice at every corner to build up a firm picture before calling the rescue services. Maybe I would end up joining the helicopter club. Embarrassing!

The east side of the island was the closest point to the mainland. Although on an island, the channel dividing me from the mainland was more like a sheltered bay with narrow exits at either end. I wouldn’t want to cross over at these narrow points as ice can be weaker there. As ice forms it expands. This expansion can often be seen as broken plates at the shore line or as crumbled fault lines at narrow sections where the ice has nowhere to expand to but upwards. It looks like a ridge line. But the centre of this bay could offer thicker ice. Here, in this sheltered part of the lake, the water is so still and could have formed faster and therefore thicker. The opposite would be a fast moving river or a running tap of water. These are always the last to freeze. It was here, in the centre of the bay, I was going to attempt to cross the lake. 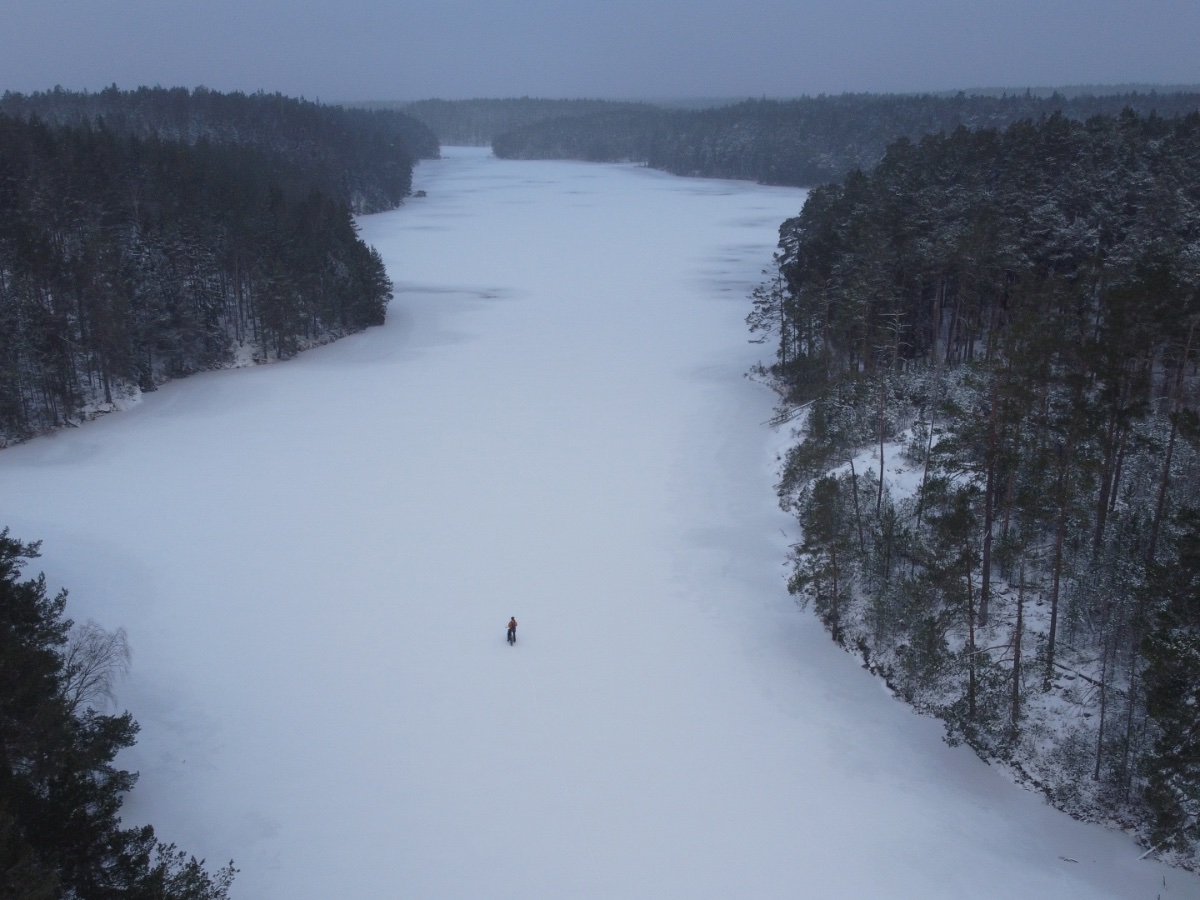 My stars must have been aligned as when I was about to start on my risky trek I noticed a movement in the forest on the other side. It was a man. Then, I saw his wife and two sons. My spirits lifted. If I broke through the ice at least I could shout for help. If my mind wasn’t completely made up about the crossing it was when I noticed they had a roaring fire going. This meant warmth if the worst case happened.

An interesting fact is the Swedish ice rescue services recommend you call them if you break through the ice, even if you have been rescued and made it back to the shore. Many ice victims succumb to the cold once out of the water as they don’t make it back to their car or shelter in time. It’s best to notify the authorities as soon as you can, when you still have the heat, adrenaline and cognitive powers to do so.

Spreading of the load I walked with my bike as far to my right as possible. If I broke the ice maybe it could aid me in climbing out. And anyway, spreading the weight is always a good thing. 50 meters never felt so far. With the ice cracking and groaning I had to keep my attention focused. It felt like I was walking a tightrope with all my gaze fixed on one position, the shore line. I made it. Land never felt so good. 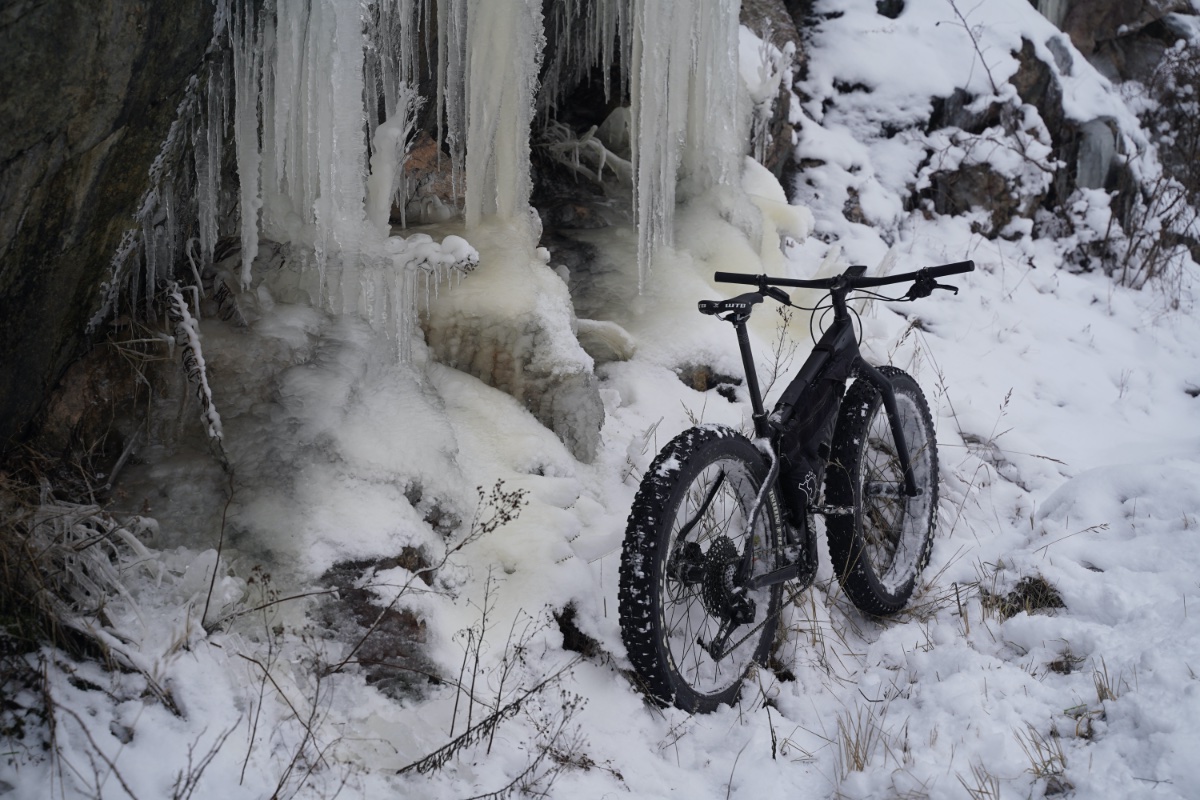 Winter bit in and several weeks passed. I wanted to go back to rectify my mistakes and bury the ghosts. A plan was hatched and this time I wasn’t going to go on my own. I redesigned the trail into a longer bikepacking trip and invited five friends for a winter camp. Loaded down with warm clothes and ice safety equipment such as throw lines and ice studs we set off. 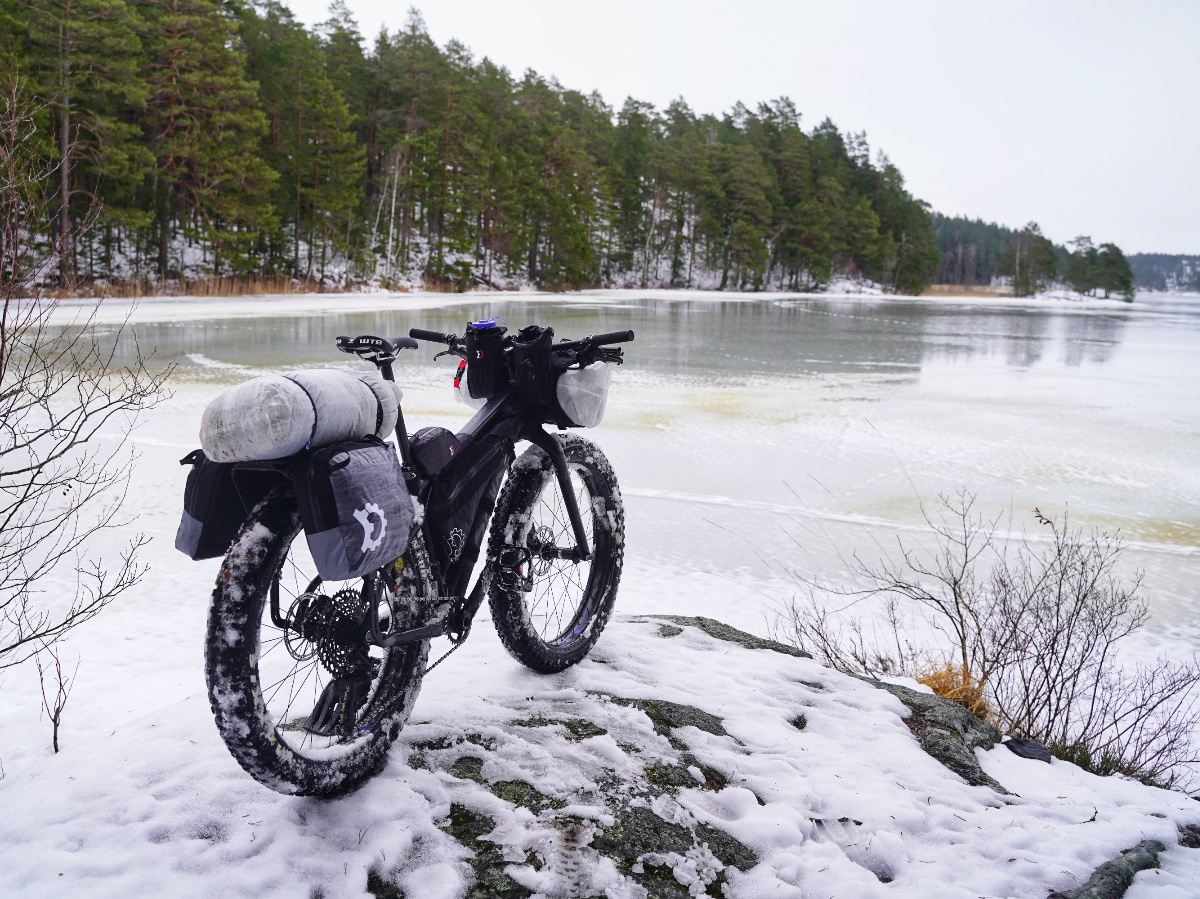 For the revenge trip I designed different variations for the route. One so we could ride the ice passage I had tried before and a second if we felt the ice wasn’t good enough to bike on. The high  pressure which originally brought the cold weather was starting to move away allowing the temperature to rise. Warming conditions made the riding through the snow to the lake difficult and the slush slowed us down to a crawling pace. Type 2 fun. 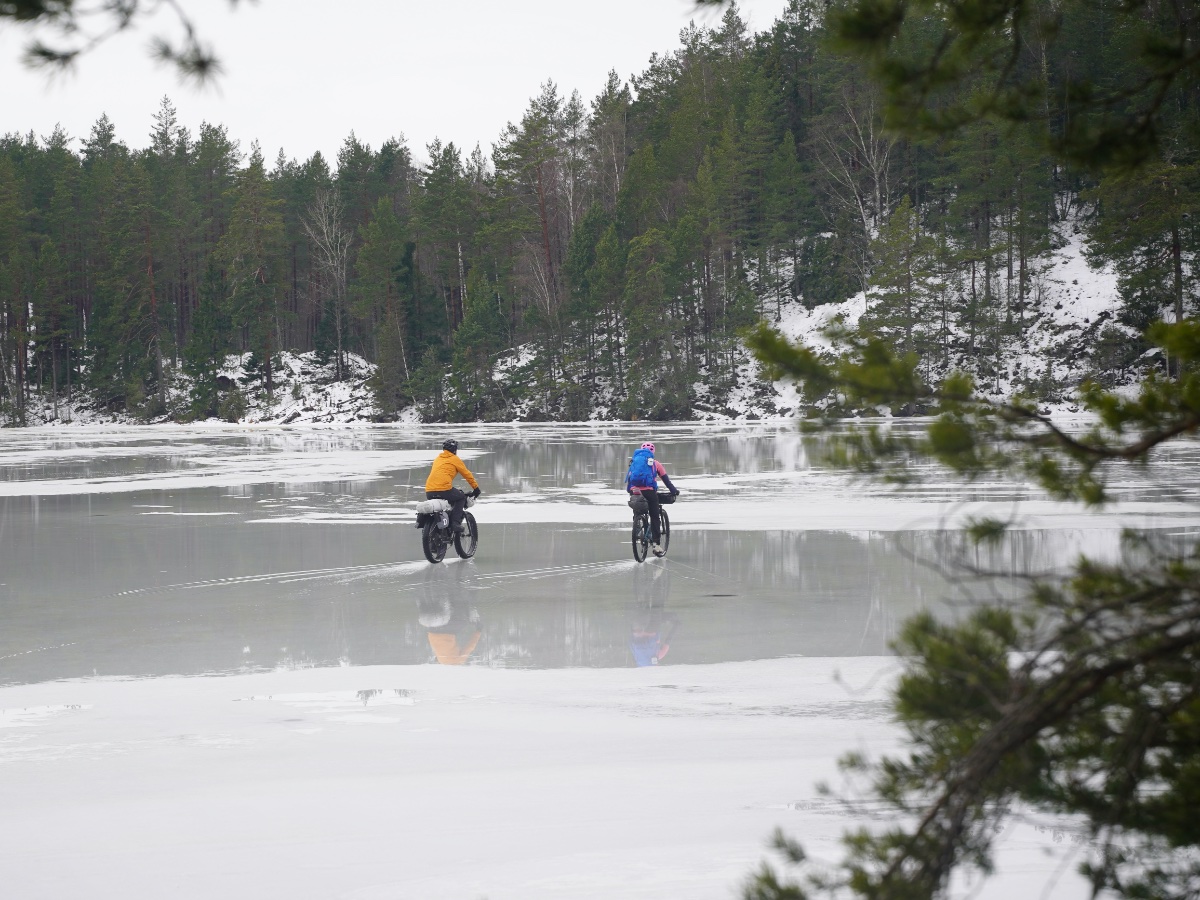 With the temperature now plus my mates began quizzing me about the lake and what we were going to find there. Water has a funny way about it. It doesn’t change to ice as soon as the temperature goes minus but it also doesn’t revert back to water as soon as the temperature process is reversed. In saying that, spring can be a very dangerous time for ice travel. With warming conditions trails or ice roads you have been using over the previous weeks can quite quickly become weak and dangerous. Every time you approach ice, check, and check again.

We arrived at the lake, this time from the north side. Despite the temperature being plus for the two previous days the lake was still frozen. The snow covering had melted and blended in giving the lake a surreal marbled effect. With failing daylight I set to work measuring the thickness of the ice. After chopping a hole 15cm deep I still hadn’t broken through. In the morning, our crossing could be made but for that evening we pitched our tents and sat around the campfire to tell tales of previous adventures. 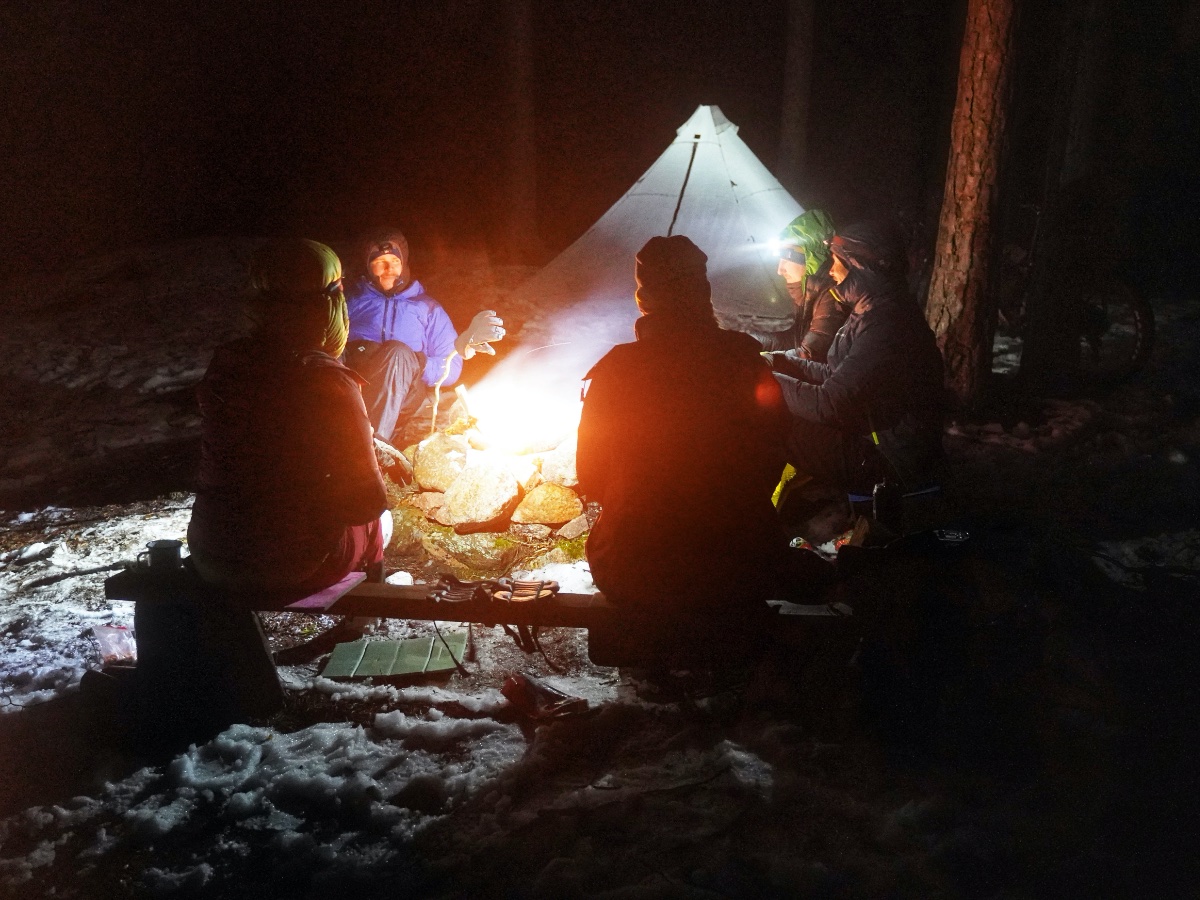 At first light we broke camp and got ready to go. Even with the knowledge of thick ice we proceeded with care. We all wore our ice studs, checked the ice again and  some riders even stayed on the shore with the throw lines. Then, we rode out onto the vast ice sheet with several meters between us to fulfill our adventure. The ice fluctuated between slippy and grippy but there were no dinner plates breaking and the only sounds we heard was the crunch of ice under the rubber of our tyres. The smile returned to my face as we felt the flying sensations. My ice demons had been put to rest. 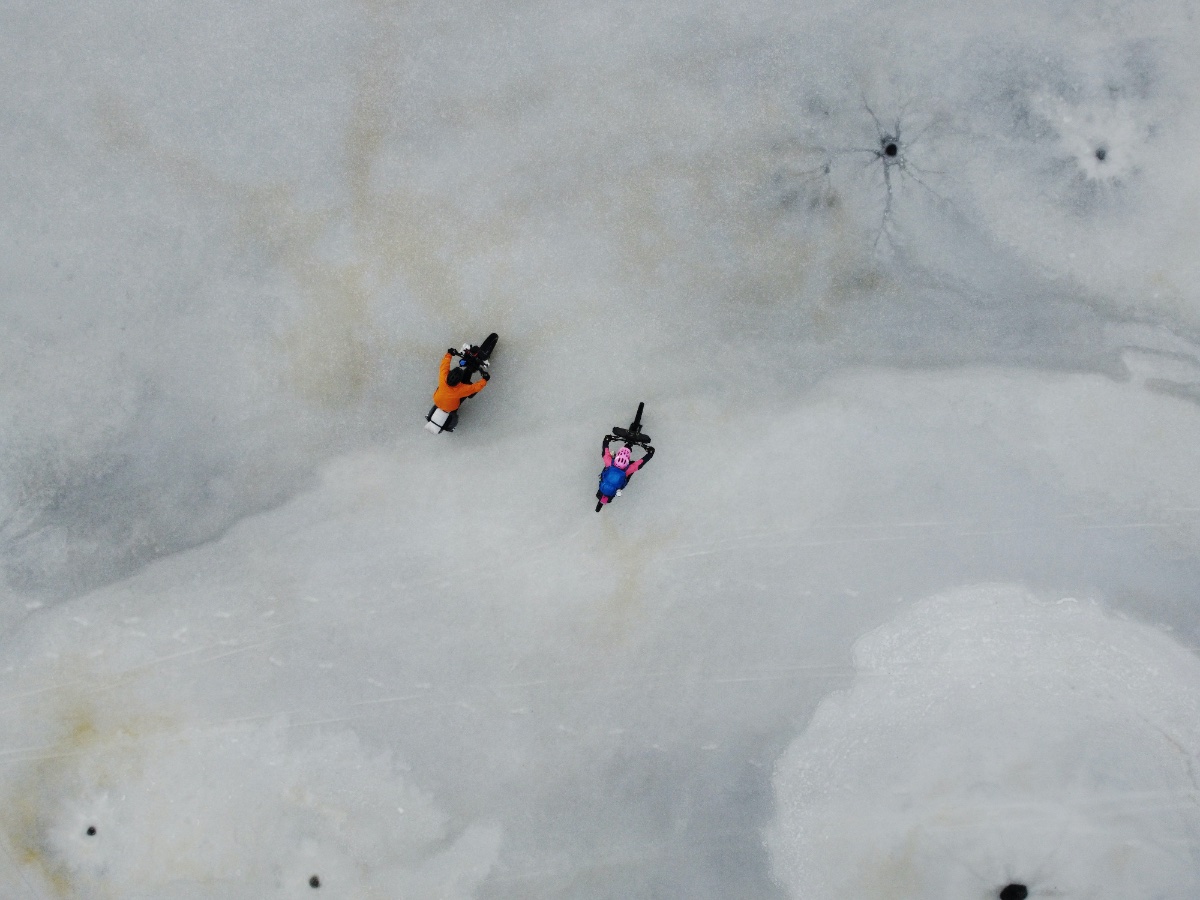 A native of Ireland, Michael now calls Sweden home. When he’s not running his jewelery company or being a husband and raising four kids, he spends his time exploring. Never content to sit still if he’s not on an adventure he’s designing the next one. Not that it always goes according to plan but if there’s no hike-a-bike involved then it’s not really bikepacking, right? Michael’s obsession is photography and as a keen amateur he loves to document his bikepacking travels. Mongolia, Georgia and Oman to name a few, but he’s equally happy on a local tour.