Revelate Designs: Bikepacking From The Beginning

Posted by Lizzy Scully in About Us

So we’re celebrating over the next few months by sharing blog posts on the history and future of bikepacking and technological advances in equipment, plus interviews with and stories by Lael Wilcox, Rebecca Rusch, Steve “Doom” Fassbinder, Kurt Refsinder, Dave Gray, Mike Curiak, and more. And, we’ll be launching new and updated products. Stay tuned by following us on Facebook or Instagram, or signing up for our newsletter.

“When I started making frame bags, no one called what we did ‘bikepacking.’ Putting bags on bikes was just a means for winter Alaska racers to carry stuff they needed for endurance races. I considered the activity ultralight or rackless touring or adventure riding. The community adopted the word after a year or so, clearly from ‘backpacking,’ which is multi-day hiking through the mountains. Bikepacking now simply means multi-day, off-road, off-pavement travel on a bike, with minimal gear.” ~Eric Parsons, Founder, Revelate Designs

The 2000s: The UltraRacers that Inspired the Bikepacking Bags of Today

When Eric Parsons started mountain bike touring in Alaska and around the world in the 1990s, the term “Bikepacking” didn’t exist. And, while he and other bike enthusiasts did big mileage, multi-day adventures, they had neither frame bags nor seat bags, handlebar harness systems nor gas tanks. And there was, of course, no such thing as Revelate Designs.

However, people had been traversing wildly diverse, rough terrain, over multiple days, on bicycles already for decades, centuries even (read a complete history on ridefar.info). They had done so self-supported, carrying all their own food and equipment. One of Parson’s role models, Roman Dial, coined the term “Hell Biking” in the late 1980s. After getting his first mountain bike, Dial discovered he could cover the same rocky, snowy, and mountainous terrain that he had always covered by foot and ski, now on wheels. And he did just that, gaining notoriety from an article he wrote for National Geographic in 1997 about his seven-week, 775-mile bike trip from the Canadian border to Lake Clark, in Western Alaska. 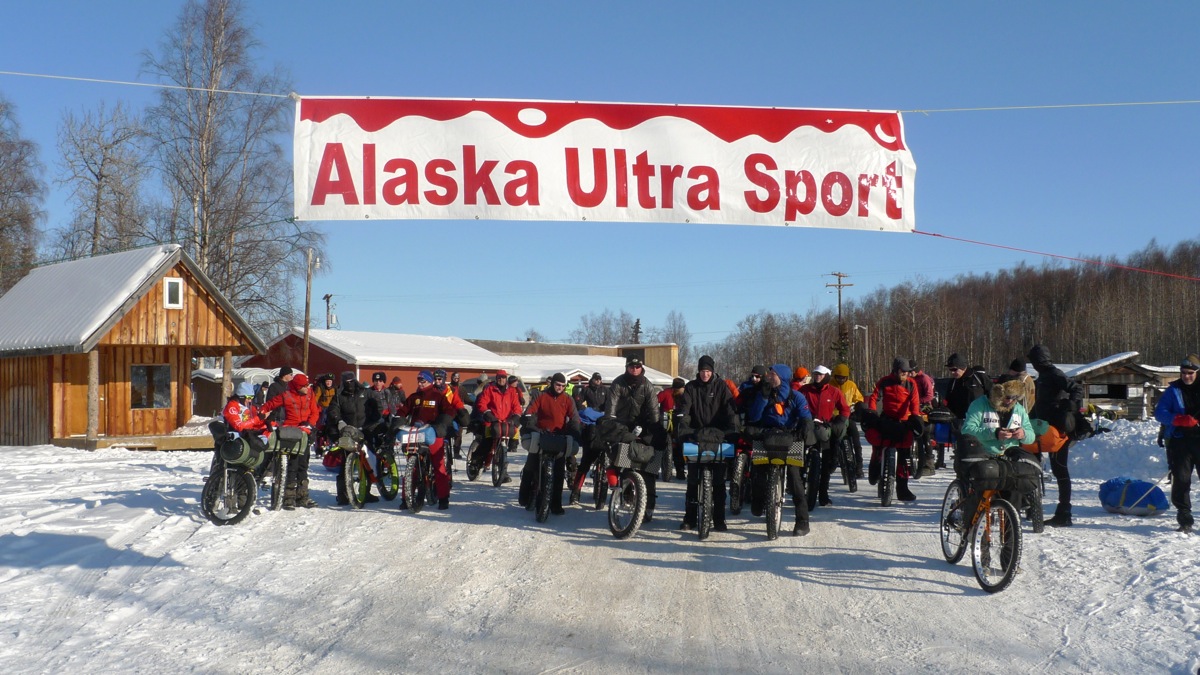 During that time, Parsons and other adventurers and racers started thinking about better ways to pack their bikes for these rough, long-distance endeavors.

“Through doing several expedition-length touring trips with different bag setups, I realized there was a major lack of carrying systems that worked well in rugged conditions,” Parsons explains. “Along the way a friend showed me a frame bag his mom had made him for winter racing in Alaska. I thought it was brilliant, and shortly after I took an interest in sewing and building gear for personal use.”

It wasn’t long until people took notice, and Parsons soon started making bags for others.

“At the time there was a real demand for carrying systems for riders doing the winter races up here in Alaska,” Parsons explains. “I saw it as a huge void and dove in, trying to come up with new ways of carrying gear needed for multi-day winter races like the Susitna 100 and Alaska Ultra Sport on the Iditarod trail.” 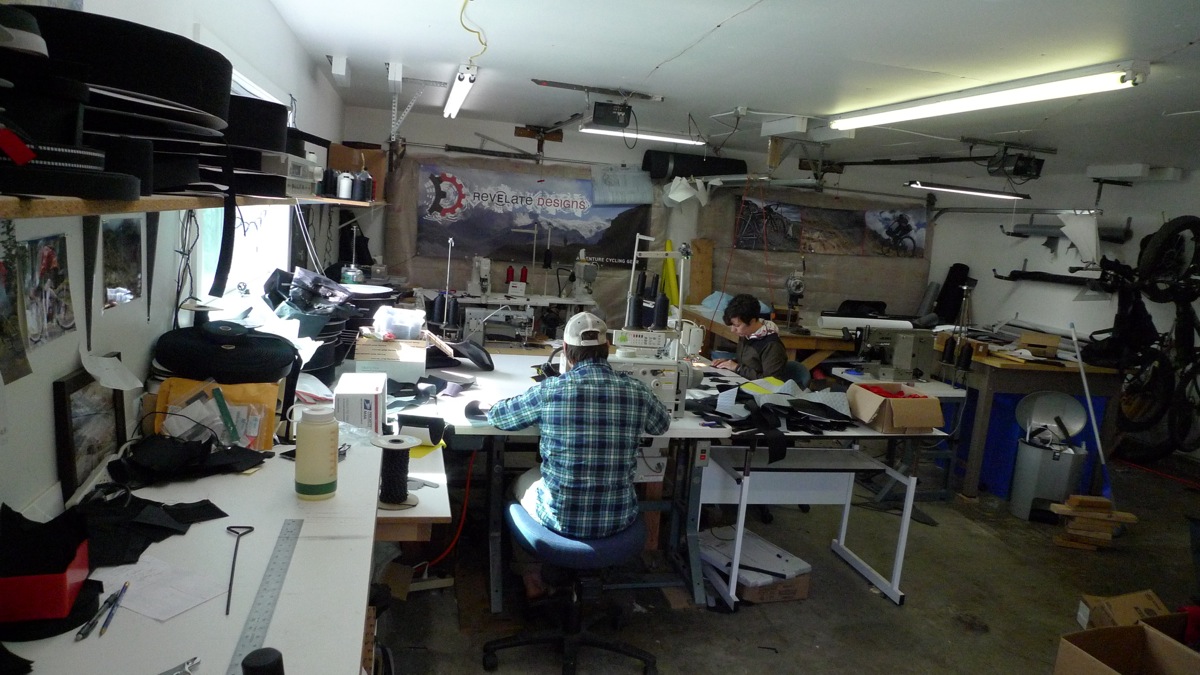 One of the many garages we lived in early on. 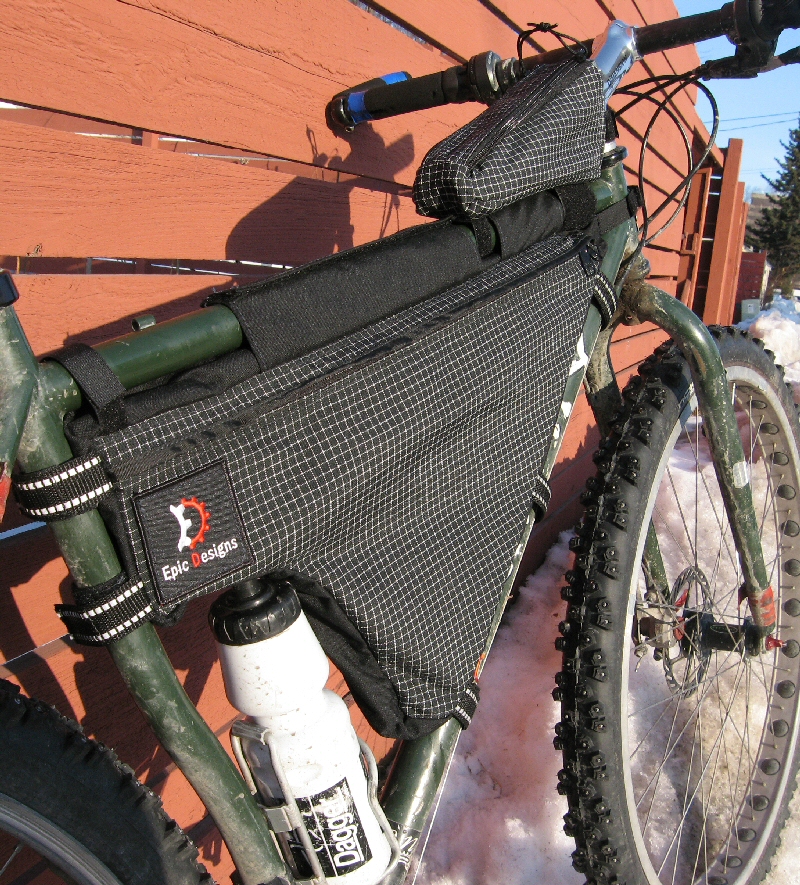 Epic Designs gear was the first produced, changing names to Revelate Designs but keeping the logo shortly after conception.

Trail worthy bikes (29er, and fat bikes) and the gear to go with it became accessible in a short period of time, boosting the sport and leaving Parsons with a 100-order backlog. Sewing nonstop after work and on weekends, it quickly became clear that he had an opportunity to turn this hobby into a full-fledged business. He just needed to quit his day job as an engineer. 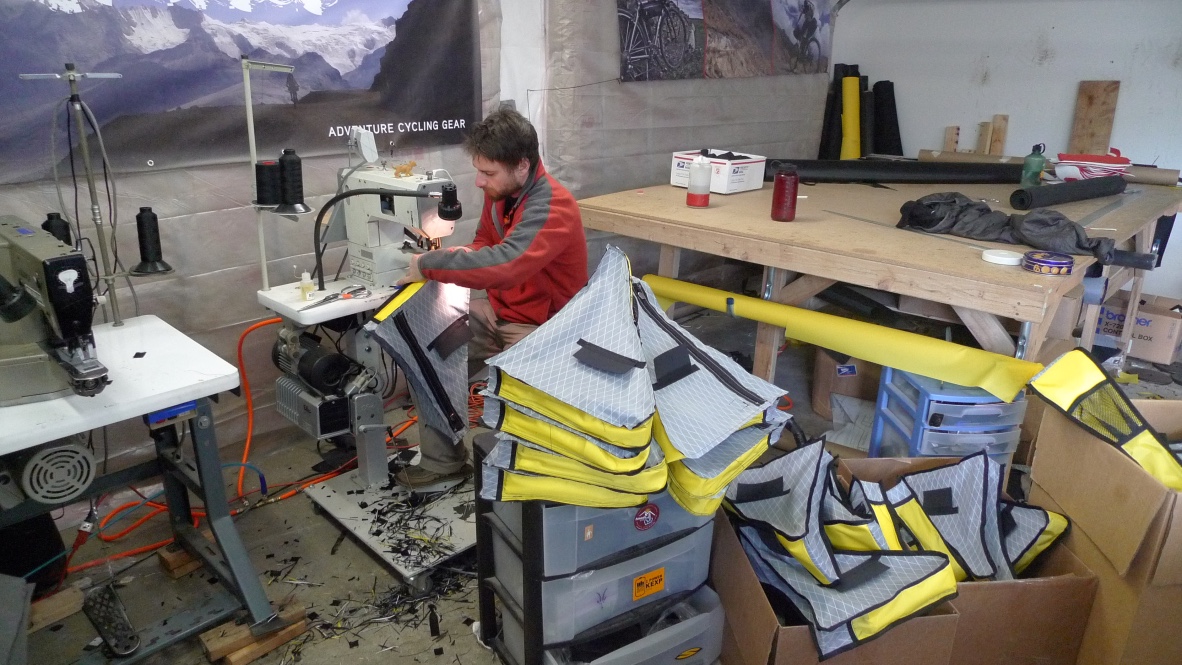 So, while recovering from a knee injury in 2007, he launched Epic Designs (later changed to Revelate Designs because of a trademark dispute) out of his basement in downtown Anchorage. That winter, Parsons feverishly developed bags and came up with the first models of the Gas Tank, Super Twinkie seat bags, and Expedition Pogies.

With a small group of core people helping him improve designs, the release of Surly fat bikes, along with the shift to adventure riding in general, his company quickly grew. Still, Revelate Designs remained garage-based. But not for long. 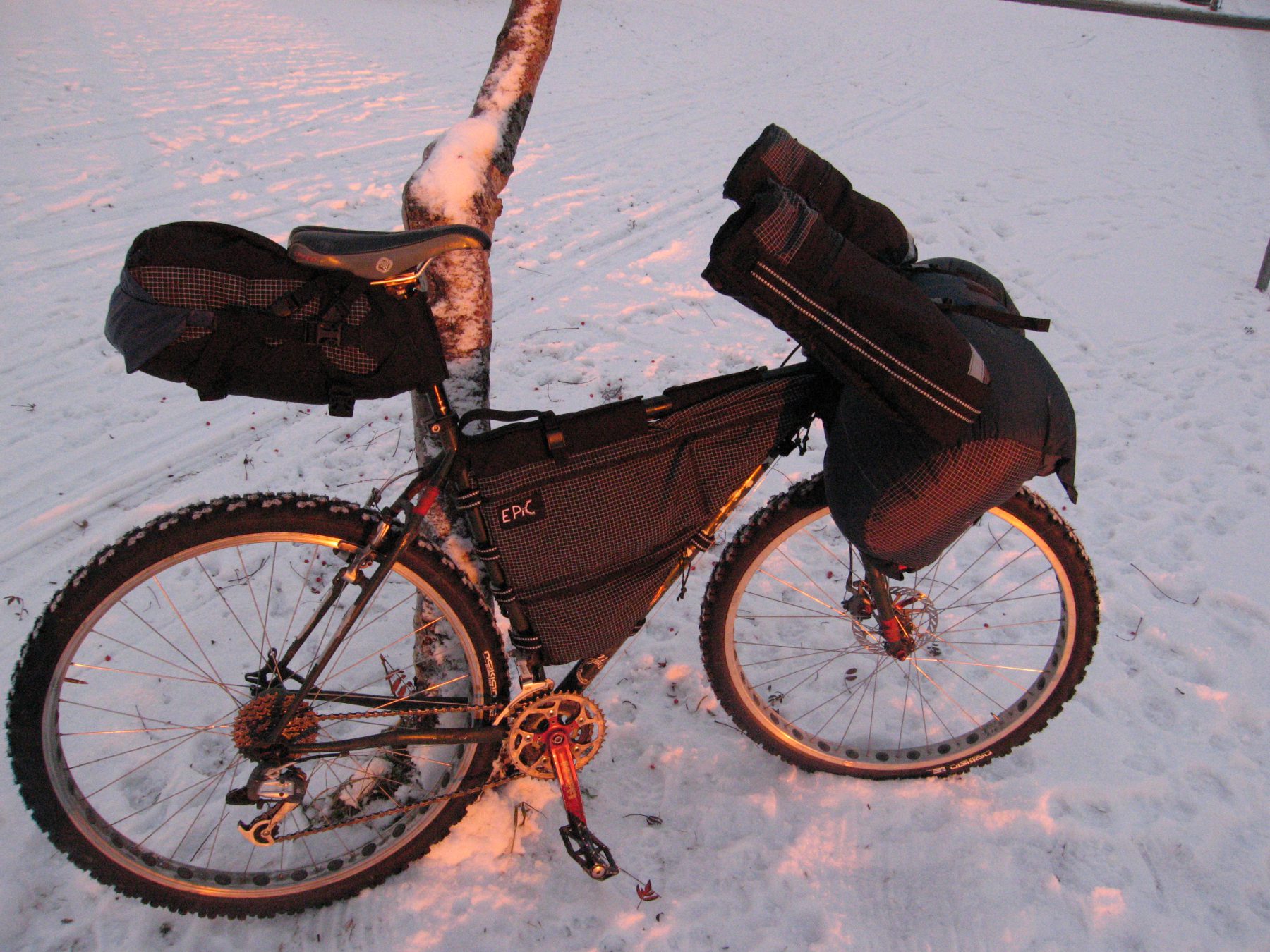 “In a modern bikepacking race, riders are self-supported, no drafting is allowed and the clock never stops between the start and when the finish line is reached, which can be up to 7000 km later. Being self-supported / unsupported means that all equipment must be carried by the rider, no outside support is allowed, so no team cars, riders are on their own, but they can use all commercial services along the way (restaurants, grocery stores, hotels, bike shops, etc.).” ~Chris White, ridefar.info

2010: The Pioneering Brand That Grew Along With Bikepacking

Bikepacking grew evermore popular with the advent of single-track and off-road races in Canada and the Lower 48, such as the Great Divide Mountain Bike Race (now Tour Divide), Arizona Trail Race, and Colorado Trail race. Eventually Parsons knew he needed to scale up, especially when those riders started asking him for custom gear to serve their needs. 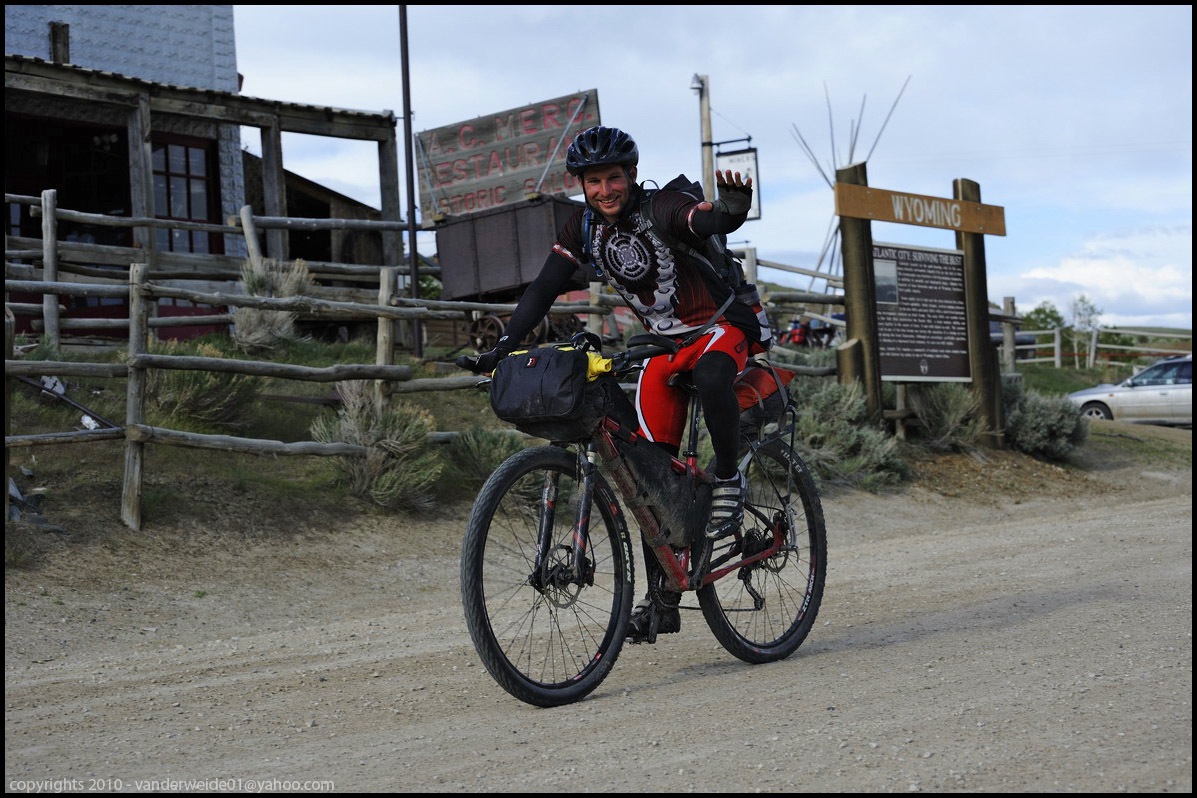 “These races were the driving forces for bag development,” Parsons says. “We made constant improvement with our designs, along with moving our production space between three garages within six months!”

Parsons also brought in industrial cutting equipment so he could cut hundreds of bags at once and be more efficient with his time. And later, he hired a cut and sew shop to build bags and take the company to the next level. 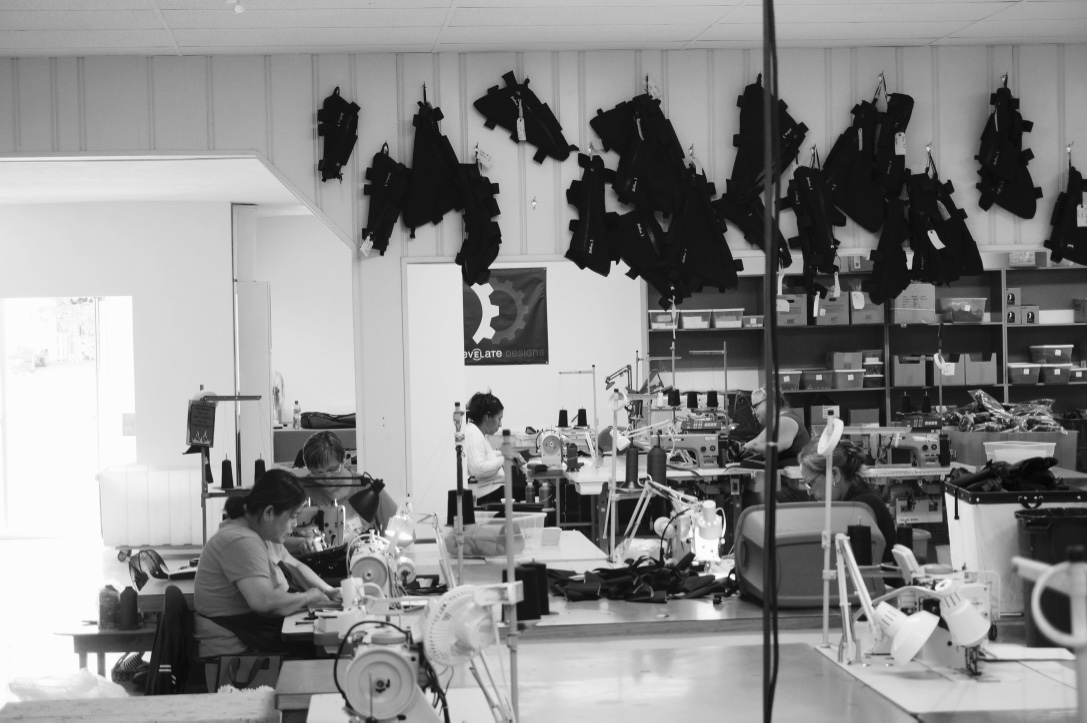 Revelate Designs expanded to an Oregon based sewing shop, which still manufactures the majority of our gear.

“We partnered with an Oregon manufacturer with decades of production experience and started making the Tangle frame bag, the first production full top, tube length, partial frame bag,” Parsons explains. “It became an instant classic among all types of cyclists because it has huge crossover. It fits mountain, touring, and road bikes, and can be used for everything from day rides to expeditions. It enables riders to ditch hydration packs and carry more on their bikes.”

That same year, Parsons also purchased Epic Ride Research from Christa Olsen, adding the iconic Mountain Feedbag to the line. “The Mountain Feedbag was the first stem style bag of its kind,” Parsons says. “Over the next few years, we improved the design with advanced materials, pockets, and, in 2016, the best one-handed closure on the market. It remains the most imitated bag in the line.”

The result of this bump in production, says Parsons, was that more people got off the waiting lists for gear and got out bikepacking.

“Ten years ago you really had to do a ton more research and work before setting off, not to mention really dialing in your often-imperfect packing systems,” Parsons explains. “But now, as more proven routes get created and the technology to share and follow routes continues to grow along with advances in equipment, more and more people will get fired up and out on the trails.”

Bikepacking has always been a goal-driven activity, starting with racers needing to achieve a goal—to go fast and complete a route, Parsons adds.

“And as it has progressed, people still get into it, aspiring to complete something great for themselves,” he says. “Revelate Designs is positioned to continue fueling that trend.” 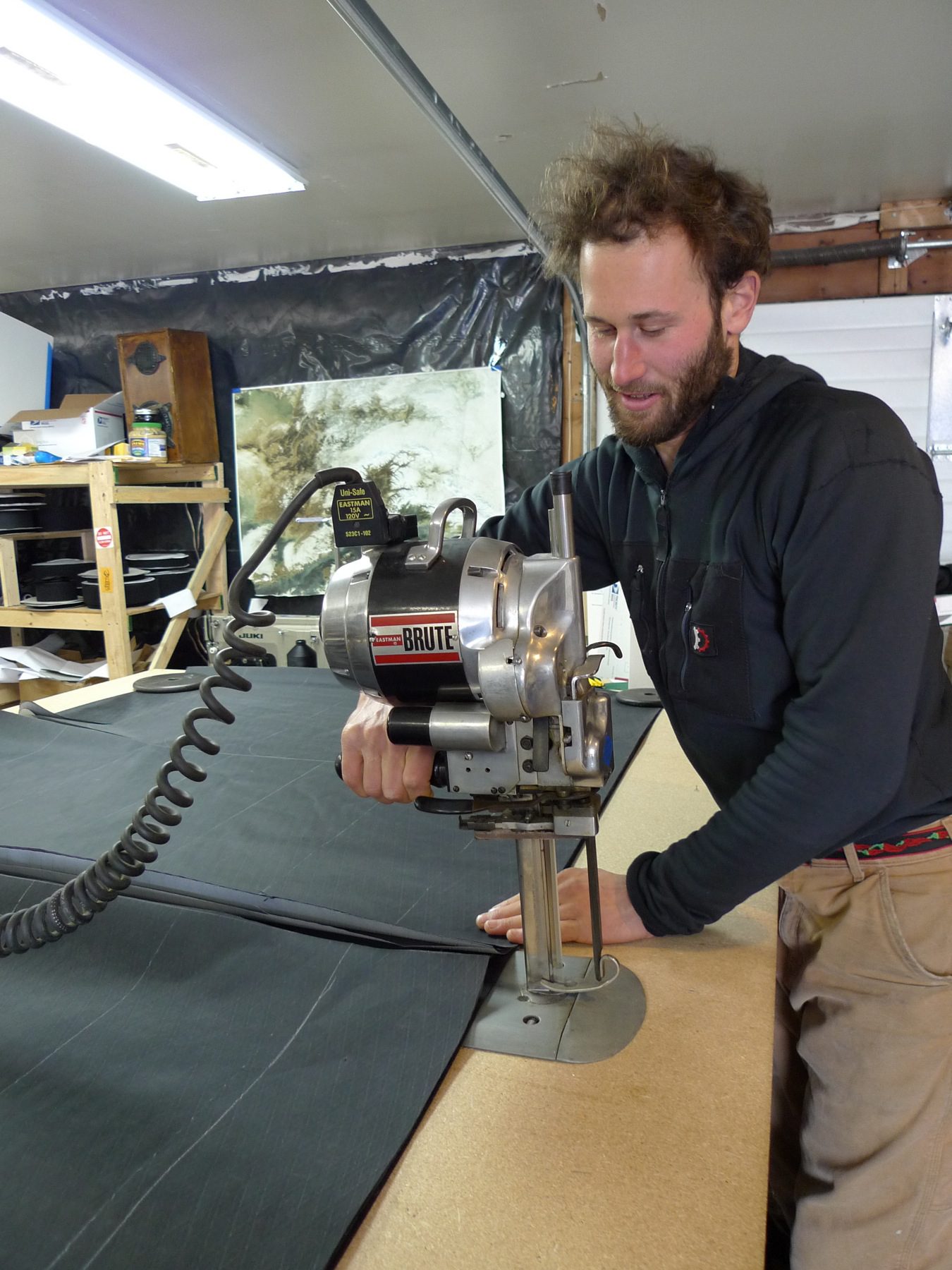 All photos from the Eric Parsons collection.