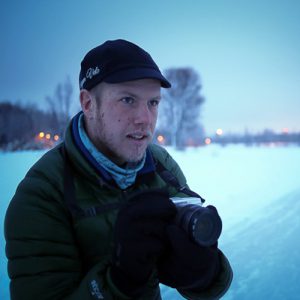 A Letter from South Africa

Posted by Nicholas Carman in Adventures

A letter from Nicholas Carman:

We are in Nieu Bethesda, South Africa, a little town in the karoo that white people like to visit. There is said to be an house resembling an owl that attracts visitors, but I haven’t seen it. It’s a nice town, for sure, as the small grid of dirt roads sit in a valley at 4500 ft with a tall white church in the center and white houses with ancient above ground irrigation ditches which feed the streetside garden oases. The cities in this country are far apart with some farms in between, much like America, and as the country becomes dryer the farms are further apart. It is a lot like Wyoming and New Mexico; eastern Oregon, West Texas, and then coastal California near the sea. Mostly sheep and goats in these parts, and game farms. Nearby are ostriches and cattle, and nearer to the coast there are tons of fruit trees and vineyards. Nearer to the coast the cities are also bigger. Generally, the black people in this country are corralled into slums, or farm housing without water and electricity, provided by contract in trade for labor. Even so, white farmers complain that the cost of labor is too high and the black workforce is lazy. I think to myself that much of the reason they are competitive on a global scale is the result of cheap labor and a favorable climate. The stats say that the people of this country should be living like the Ukrainians, which isn’t a particularly high mark. But the whites live much like us and most blacks make up for it with widespread poverty. We meet the loveliest people in the karoo, farmers and professionals and mountain bikers, but I want to scream when they mention reverse discrimination and about how hard things are for them in this country– for the whites, that is. South Africa and its politics are a world away from home, but I have the feeling that I now know a little more about the American South in the 1870’s or the 1950’s. 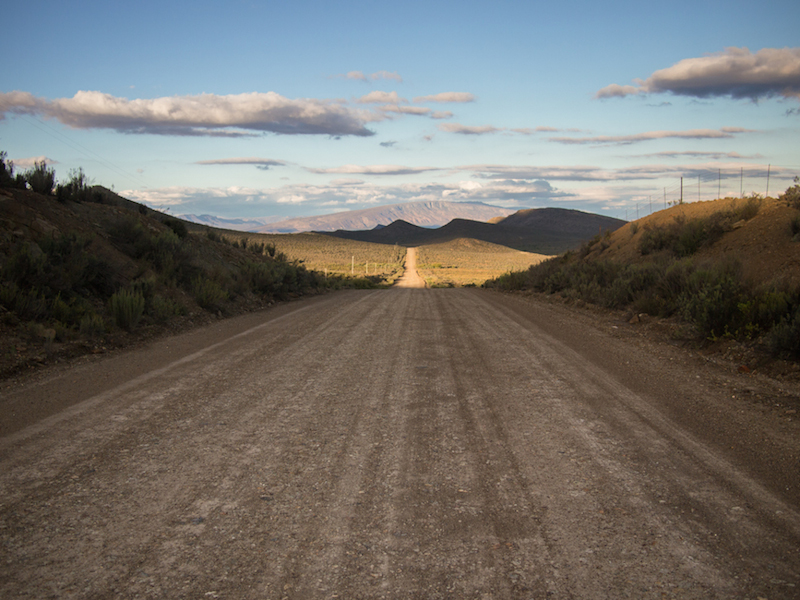 And I thought I was just bikepacking across South Africa. 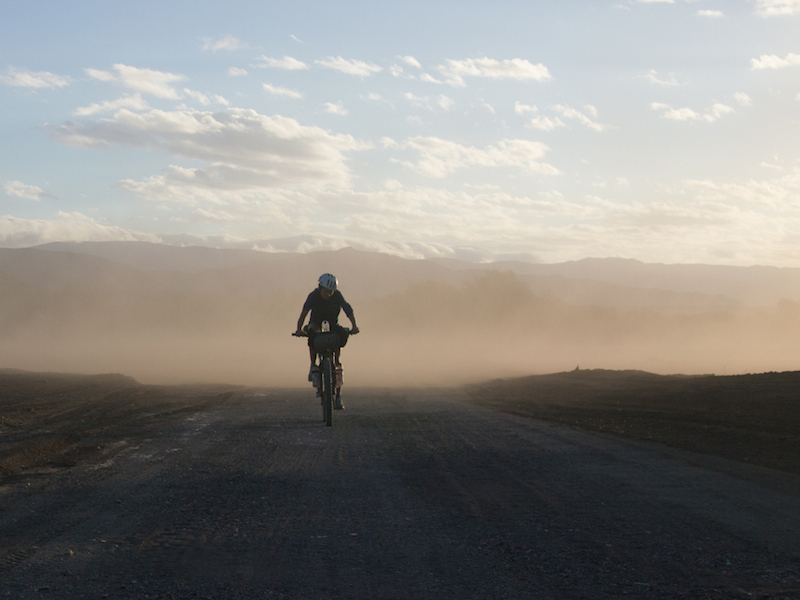 Lael says the towns are like scenes from a Larry McMurtry novel, only people drive on the wrong side of the street. Old gas station signs creak in the wind. Cold sodas and cheap wine are the mid-afternoon pastime of the jobless. The wind blows every afternoon. Nearer to the sea, the wind blows all the time although we’ve been lucky with weeks of tailwinds from Cape Town. Everything is fenced and gated in the country to keep livestock and game in and to keep people out. We’re warned of crime all the time– warned of “they” and “them”, the others– and I believe it exists, but it is a lot of the same misunderstanding that happens everywhere. Don’t go to Albania say the Serbians, the Slovakians warn of Ukrainians, the Americans warn of Mexicans, and Americans warn of other Americans. The dirt roads remind us of the Divide. In fact, we’ve found a fantastic new route across the country called the Spine of the Dragon, recently published in a paperback guide called Riding the Dragon’s Spine by David Bristow and Steve Thomas. It runs from Cape Town to Zimbabwe across the country, through Lesotho.

I think it will become the “Divide” route across South Africa– the accessible long-distance dirt route, the gateway, the people’s route. The spirit of the published text is inclusive and encouraging; by the people, for the people. All the GPS tracks are available for free download from the Dragon Trax website, although a donation to a charity of your choice is suggested. Great stuff. Mountain biking is thriving and self-supported riding is growing in South Africa. On the subject of mountain biking, a lot of it takes place on dirt roads. There are some trail centers near the city, which I have not seen, but mostly it is all 29ers and gravel roads. Some private farms allow limited access to more technical tracks, but singletrack in the country is limited. 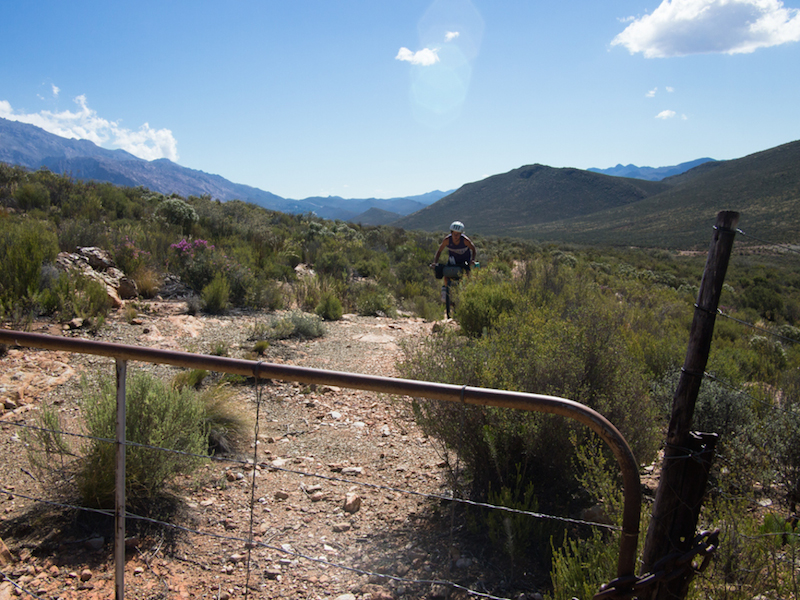 We should be in Lesotho soon, and eventually Zimbabwe, Botswana, Malawi. I don’t actually know where we are going for sure, but this is what I tell people.

We were chasing some of the Freedom Challenge route for a bit. I’d read– researched– their extensive website and learned that the route requires some traversing permits. I contacted the organization regarding permits and GPS info while in Cape Town, but did not receive a response. So, we set off with the maps and narratives publicly available on the site. From Montagu over three fabulous days of dirt roads, 4×4 tracks and one historic donkey trail later, we had made it to Prince Albert. There, we met a guy who has some involvement in the organization who further encouraged us to explore the route. Then I got a tense note from the race organizer telling me that we were “jeopardizing the future of the route”. It seems there had been a communication failure, e-mails had sublimated into the ether and we were at risk of doing the opposite of helping the cycling community. I was hoping to do some important legwork to bring back info about the Freedom Trail, which I’ve since learned is mostly just the Freedom Challenge, which is a once a year inn-to-inn adventure race– not my bag, to say the least. Sometimes you’ve got to knock on doors to get some answers. 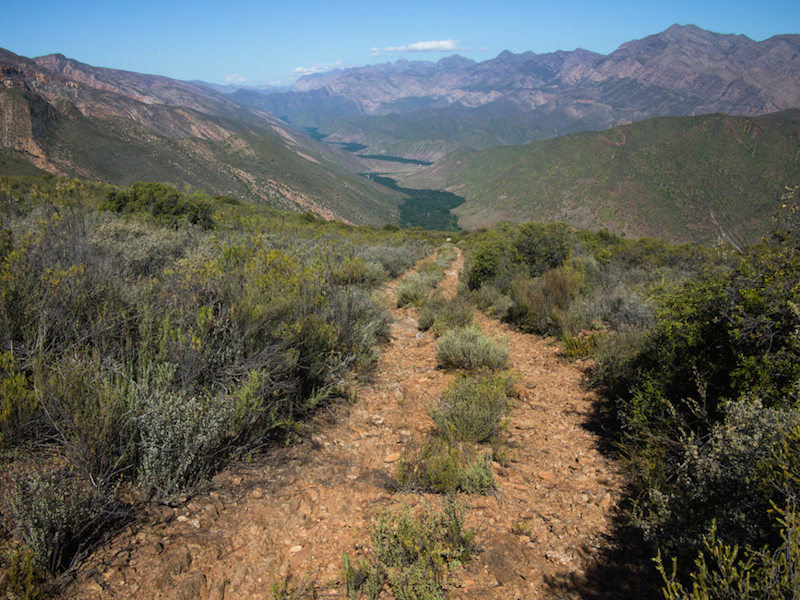 Imagine how pumped we were to learn about the Spine of the Dragon route. Inclusivity and self-reliance are the name of the game, and if you finish the whole route you claim the title of Dragon Master! Yes please. 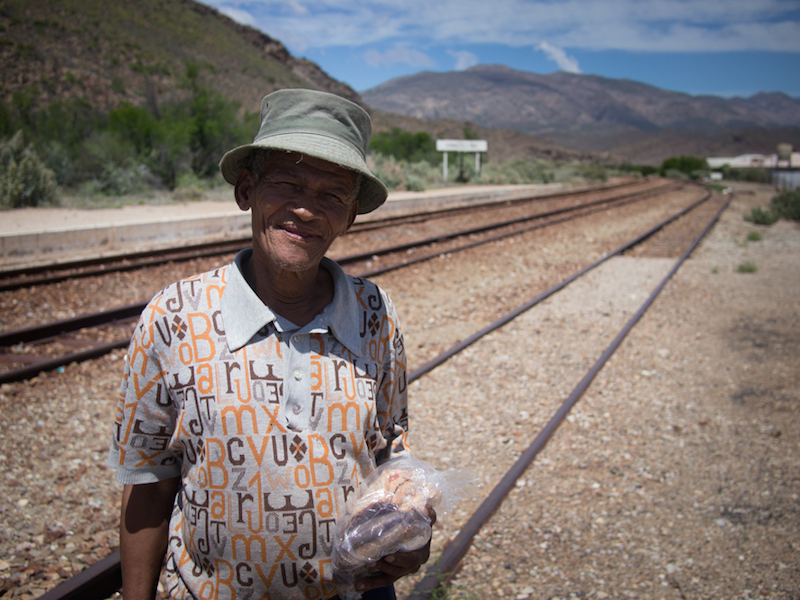 The people we meet in the karoo are exceptionally hospitable. We have a habit of asking for water near the end of the day at a farmhouse. In four consecutive evenings we are invited inside, once given a private cottage for the night. Twice we enjoy a braai of lamb chops from the farm and wild kudu boerewors. We are sent away with kudu biltong and fruit in the morning. Forget what I said, these people have hearts the size of Africa. It is money and politics which lack heart, I suppose. 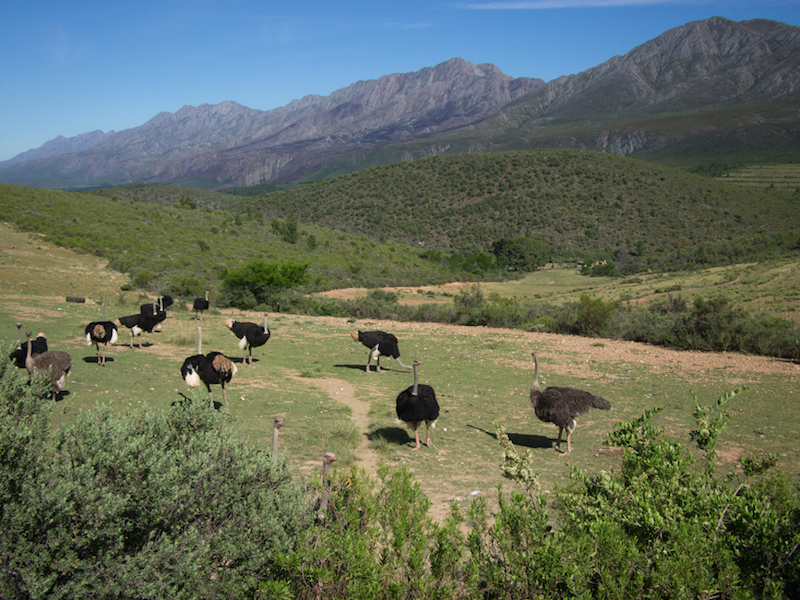 I think Albania comes up once a day between us. And Ukraine. We miss them both. There is magic left in these places, as some of the last countries in Europe not enveloped in the EU. I still have family living in eastern Ukraine where the conflicts are focused. I cared greatly for what was happening when I was there. But now, I hardly know the status of the conflict and efforts at resolution. It is a lot easier to ignore such things when you are across the globe. This explains my ignorance about all of Africa until now. 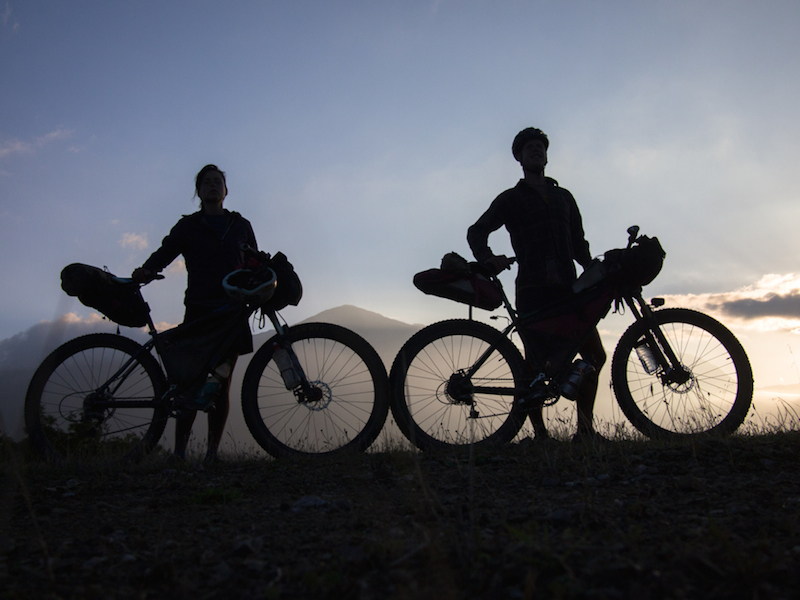 The bags are holding up nicely. Four months later and the colors are faded. I still can’t believe you cranked out those new designs the day before I left. There is some wear on the seatbag from abrasion with the tensioning system, and the structure could be improved near the seatpost, but when well-packed the bag behaves much like a standard seatpack despite the extra weight of the computer and the added reach over the rear wheel. I don’t worry about shock damage to the MacBook Air with this system as I did with the Carradice, or as I would with a pannier. That big buckle on the framebag is also super solid, although the system should probably operate in reverse so the extra length of webbing hangs down.

Currently I must tuck it under the flap every time I close it. The structure of the bag is fantastic, and I’ve become accustomed to packing and overpacking it (bottles of wine and apples, you know) without ever the fear of damaging a zipper in the process. The big zip on the non-drive side has been solid so far, but is starting to become more difficult to operate due to grit and wear. I’ll try to clean it soon and add a dab of lightweight lube to the slider. Lael’s zippered framebag is great, despite the daily punishment she delivers. Still, I think the zipperless design is the way to go for most of us long-term folks. I replaced a sleeping bag slider in Athens and Lael had the entire zipper on her rain jacket replaced in South Africa– each repair cost about $3. The tent zips are holding, but they are moaning in a way that is very familiar. This is my third Big Agnes Seedhouse SL 2 tent in six or seven years, and that includes repairs and replacement parts along the way. Zipper free in 2015?

My B&M USB-Werk charging unit died, likely due to wet weather in Europe. A top-shelf Schwalbe Hans Dampf tire delaminated from the inside at the same time that the knobs were also tearing away from the outside. Sealant went everywhere on the backside of Swartberg Pass, but I made it to the next town. I got a mysterious hole on the inside channel of one of my carbon rims– a cosmetic defect I am told– now repaired with some South African epoxy. A warranty replacement is lost somewhere in the South African post, the result of an ongoing postal strike. My camera lens rattles like mad, after several seasons of riding on my back. Sometimes I feel like I’m flying too close to the sun with all this shit. You know, I still own that 1985 Schwinn High Sierra, which is probably cruising the streets of Tacoma right now. That was a good bike. That was supposed to be the last bike I ever owned, but so was the Pugsley, and the Raleigh, and now the Krampus. I actually miss the Mukluk from this winter. I have been wondering if I could finally satisfy my “one bike for all seasons” obsession with a Mukluk and two pair of wheels.

We’ve been thinking about coming back to Alaska for a greatest hits fatbike tour in March, connecting a bunch of winter rides that were unattainable when working six and seven days a week. Then I’d probably work for a bit over the summer. Lael is talking about a real big ride next summer, barring any other wild ideas. Then we would be back on bikes full-time in the fall. 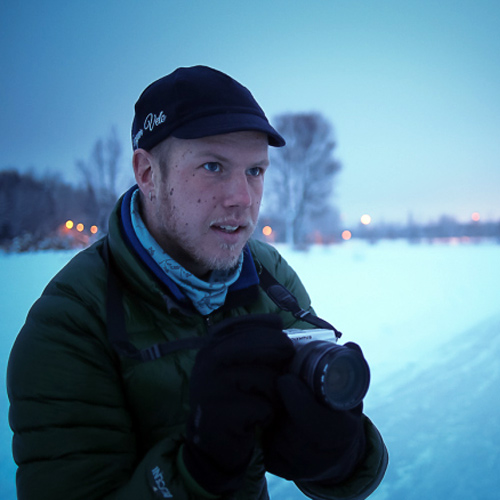 Nicholas Carman left on a bicycle trip in 2008. Since then, he has have chosen to spend more than half of each year on the bike; to ride bigger tires, off-pavement; and to cover less distance every year, in trade for riding over mountains and drinking with locals. Nicholas has spent time working in bicycle shops and restaurants, as a pedicab driver and a marine forklift operator, and increasingly, as a freelance writer and photographer. Recently Nicholas has spent time on the 1000 Miles Adventure Route and the Adriatic Crest route. He shares words, images, and ideas at Gypsy by Tradeand Instagram @NicholasCarman.