Adventure biking with a toddler

Warning – lots of kid photos. Turn back now if you’re not into that.

This winter my wife Julie was interested in doing a Spanish language immersion in another country. Guatemala was rather quickly decided upon for it’s high standard of language schools and ample outdoor fun opportunities. She flew down in early January to start classes and do a home stay, my son Finn and I headed down for 3 weeks so we could all be together and basically be support staff. This was quite different from other international trips I’ve done with my bike. First um… I had a 3 year old with me, secondly, we were not traveling, but based in one city doing day rides. 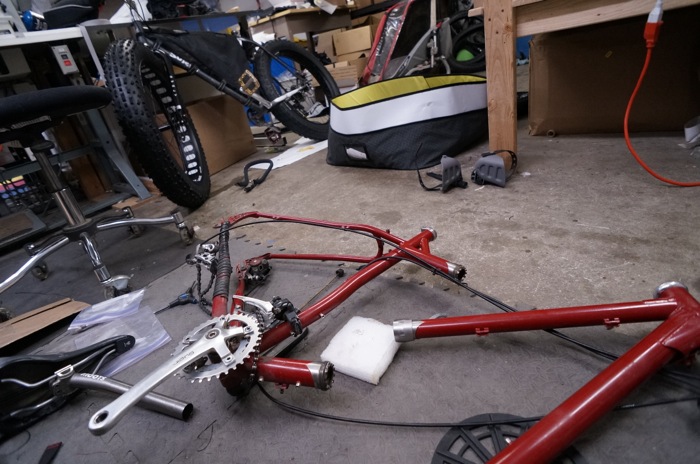 Time to give the snow bike a rest for a bit. 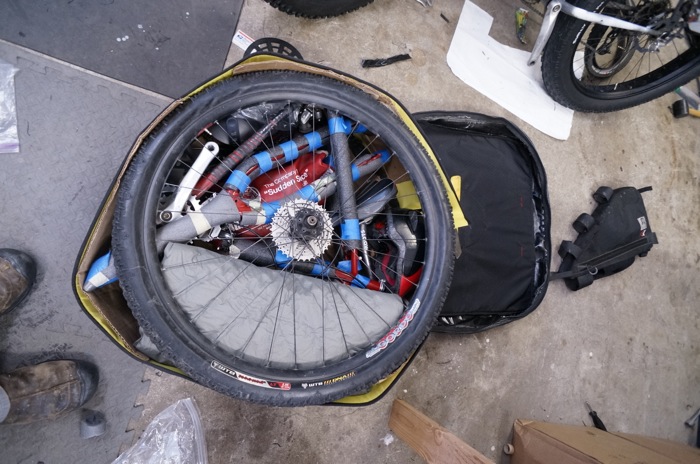 The S&S converted Surly Ogre all packed up!

We based out of Xela (Shey-La) and re-united with my wife Julie and setup in a rental apartment. This was pretty awesome as we had our little place to call home and cook meals during our stay. We quickly fell into a routine, Julie would leave for classes – Finn and I would go off on adventures, getting back in time for a late lunch and nap. Giving me about a 2 hr window to catch up on work and email before we headed out for the evening. 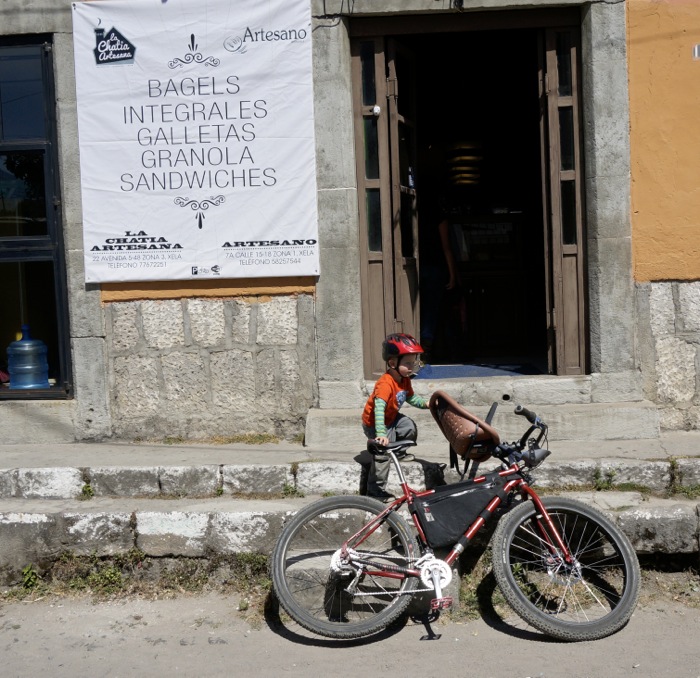 My bike setup was pretty simple – It’s an Ogre I had retrofitted with couplers and re-painted. 2×9 drivetrain 28-36 with a 12-36 cassette. Front wheel borrowed from Dusty’s Krampus, Jones 710 Loop bars and most importantly – a Yepp Mini front seat . The front seat warrants it’s own review, but I’ll keep it short and say it performed wonderfully and I’d highly recommend it. The Jones bars also really help with seats like this as they give you more space to be able to lean back more since the kid is taking up so much room up front.

Xela is a big city no two ways around that. It’s not much of a place for tourists & gringos. It has a solid working class feel with several universities. There was not a ton to do in the town itself, which made it so nice to have wheels. 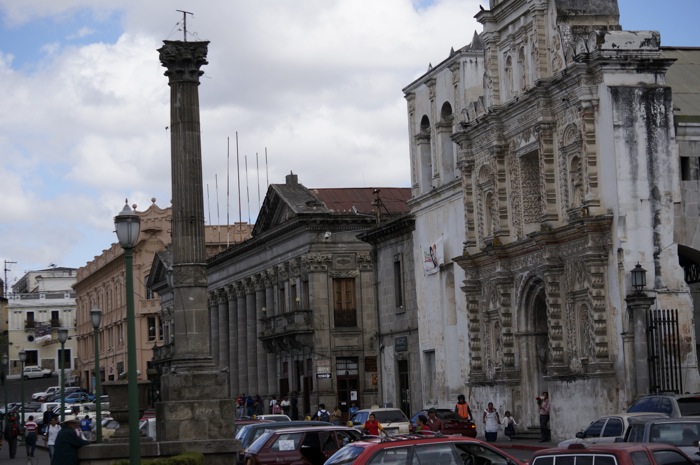 Each day Finn and I would pick from the 2 directions heading out of town that were safe to bike and try to get into the countryside, it usually involved 15-20 min of dealing with some traffic and sucking down exhaust before we could get onto some mellow dirt roads. Xela is in a broad valley, so every option & route involved a decent amount of climbing right off the bat. 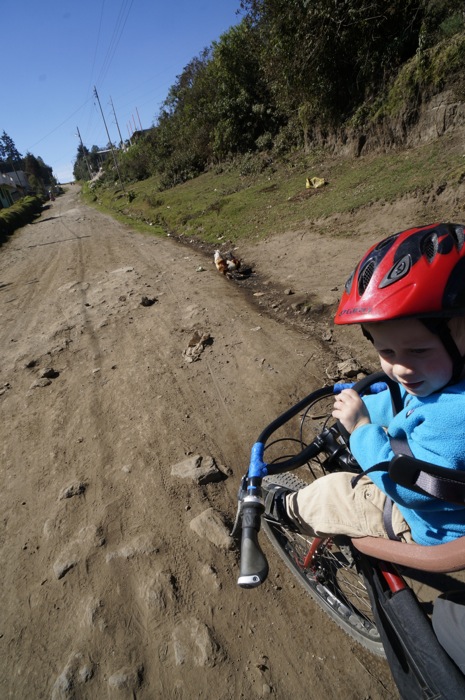 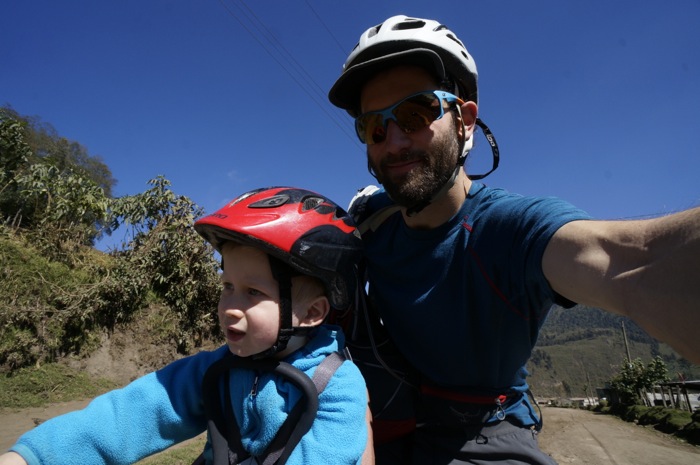 Having traveled rather extensively by bike in Latin American countries I can genuinely say you get a much different response when mountain biking around with a 3 year old on your handle bars than without. Cyclists are generally well received, but you’re still a gringo. Having a kid along I think makes a common connection to family and is kind of an instant ice-breaker to a smile, to say nothing of the curiosity of the bike & seat contraption. 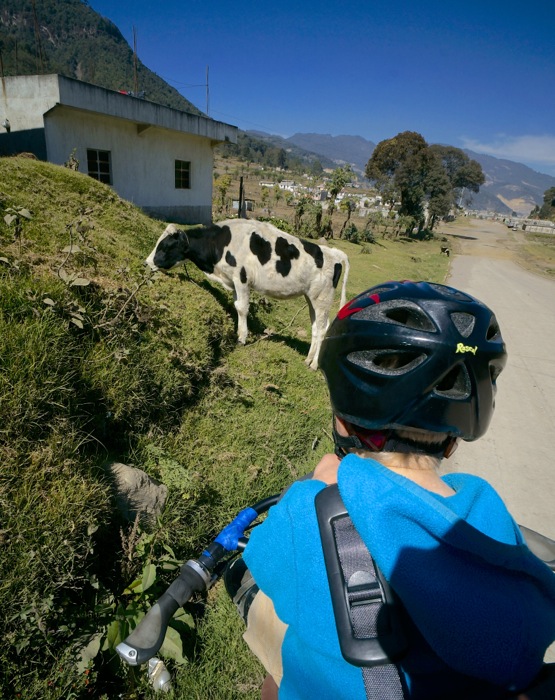 In Anchorage before Finn and I left people asked what our plan was. My response was generally, “Ride around the countryside and look for Donkeys.” and that was really the plan. Unfortunately there were very few Burro’s in the Xela vicinity, but we found and made friends our fair share of cows and pigs. 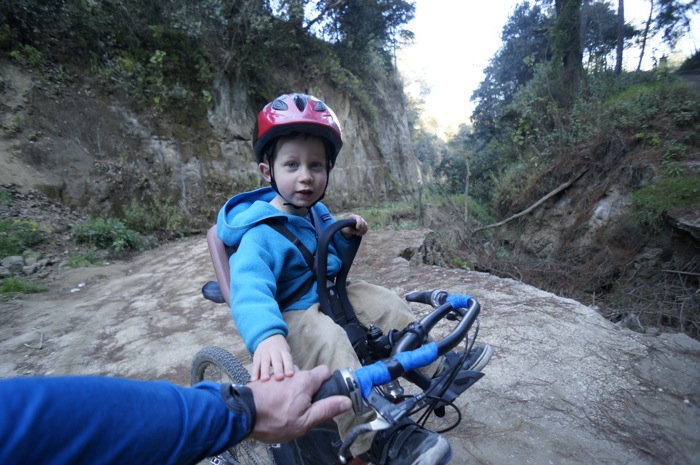 Having a companion along for the ride at such close quarters is a pretty unique thing. The level of trust is through the roof. When out exploring the fringes of town Finn was always my sounding board if one way was a good way to go, or if it was safe – that nobody was going to mess with us. I had my fair share of stress about safety, this is the outskirts of a large town in Guatemala after all. Finn would usually bring the conversation back to looking for animals and so it went, all was well. More typical conversations usually involved hiding from the stinky jaguars that were constantly stalking us. 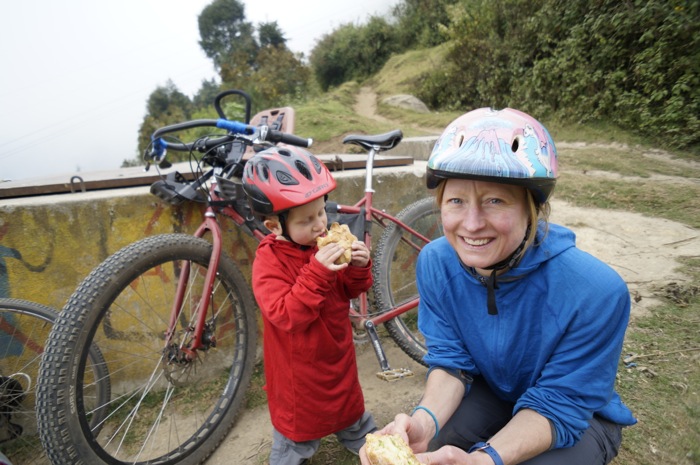 One day on the weekend Julie rented a bike and joined us, complete with kids dinosaur helmet. It was awesome as we got to show her some of the routes we’ve discovered while she took one on one classes for 5 hrs and studied all day. 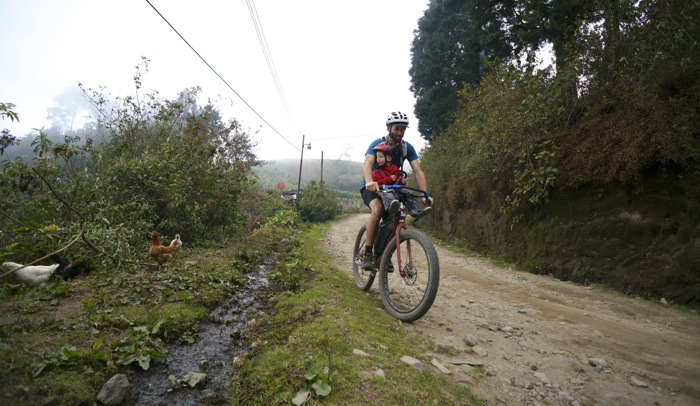 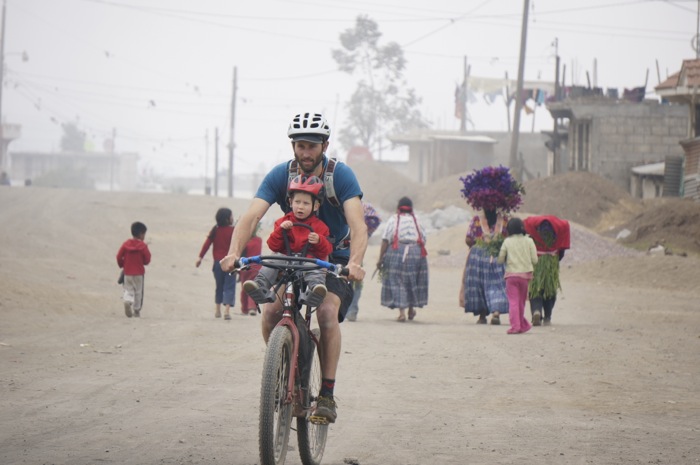 As our stay progressed I started to get antsy for a little more adventure than the out and back’s we had been doing. Since Xela is not on the gringo or biker trail the only real source of information was, of course – Google Earth. I spent hours on the ipad looking at google trying to piece together what would be reasonable solo with Finn on board. Eventually, I found what looked to be a loop that circumnavigated a volcano just west of the city. I had both the start and finish to the loop scouted out already so we just had to try to connect the dots. Off we went! 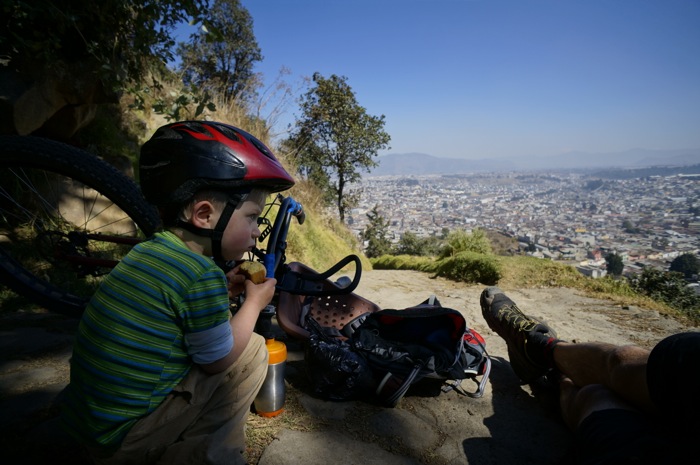 Finn during a second breakfast shade break hike-a-bike up a cobblestone path getting out of town. The alternative is a steep 15 minute climb on the main road out of town sucking down the equivalent of a carton of cigarettes in truck exhaust. No thanks. 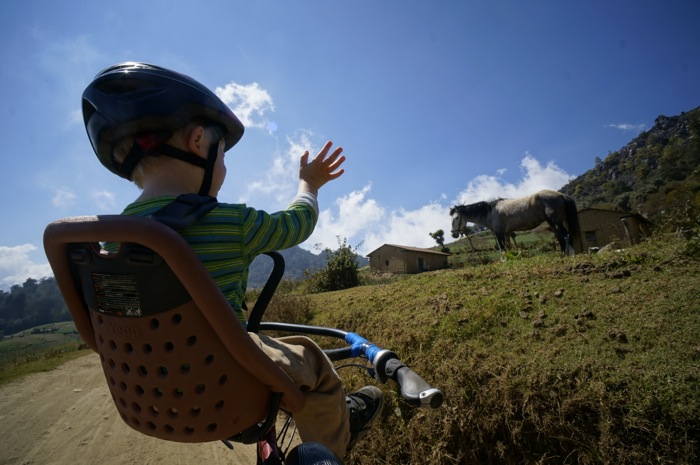 Hi Horse! Finally up in the countryside after a strenuous hour+ climb. 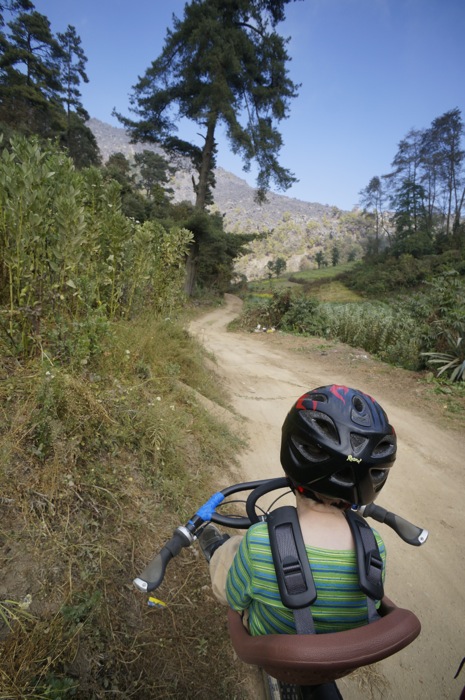 Cruising along… this is the good life! 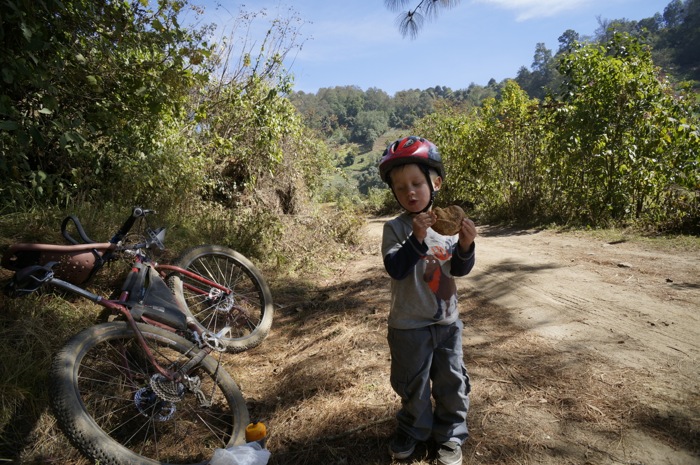 Lunch break. Peanut butter and honey on whatever bread we picked up that morning from the bakery. Guatemalan’s love their bread so we were in heaven. We had our pick from whole wheat, sweet breads, banana bread, even rolls stuffed with re-fried black beans – a favorite!

So route. This is what it looked like, of course I could not exactly bring the ipad with me so I had to take photos to review on my camera or commit to memory, neither all that ideal for navigation. 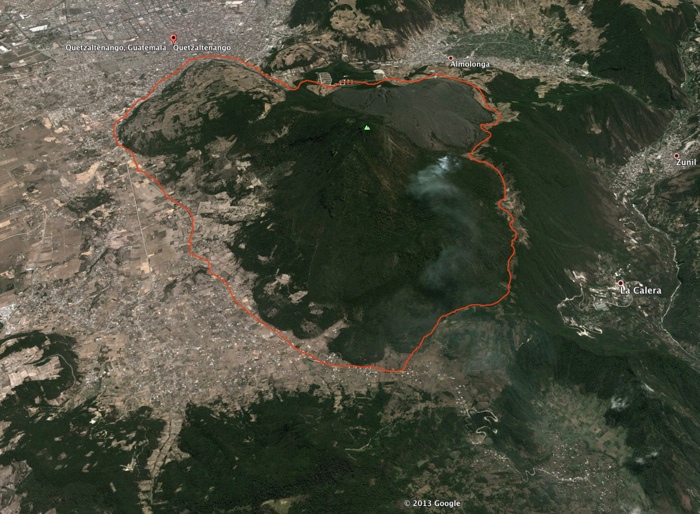 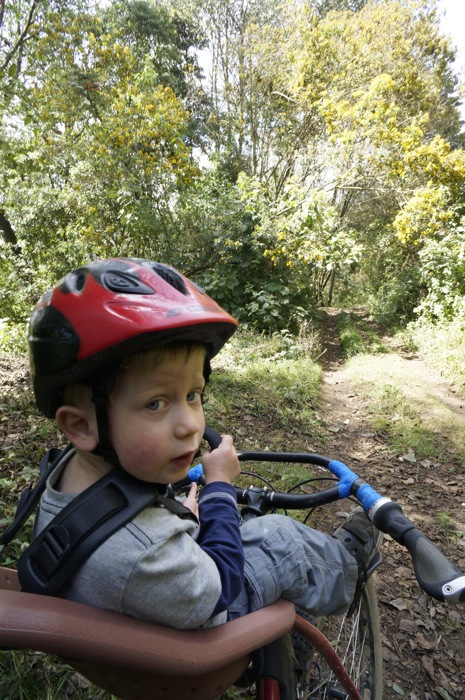 The road dwindled down and we were down to singletrack. Finn and I harbored the same doubts right about now.

Just then 2 guys with huge machetes showed up and through broken Spanish they said it was the right trail to Llano del Pinal, which was the village on the road where we were headed. We rode singletrack farmer trails out in meadows and back through tight woods for the next few miles. 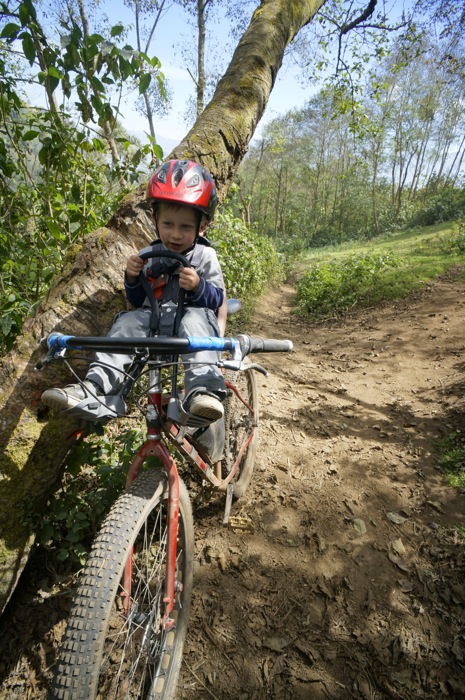 I think the real benefit of 29+ is that you get massive stability when you have a 30 lb kid riding shotgun. 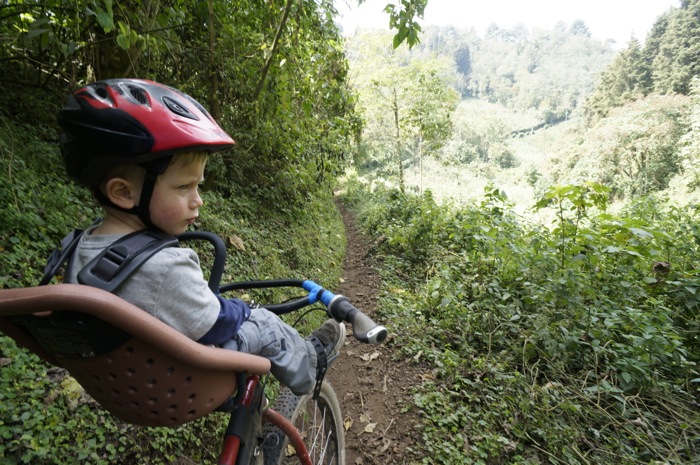 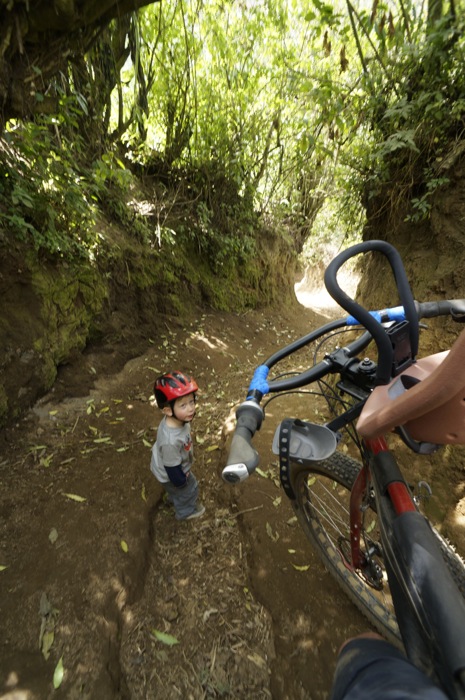 Dismount hiking for some really steep tunnels near the end. Deeply trenched trails like this are pretty common where people have been working the fields for centuries. 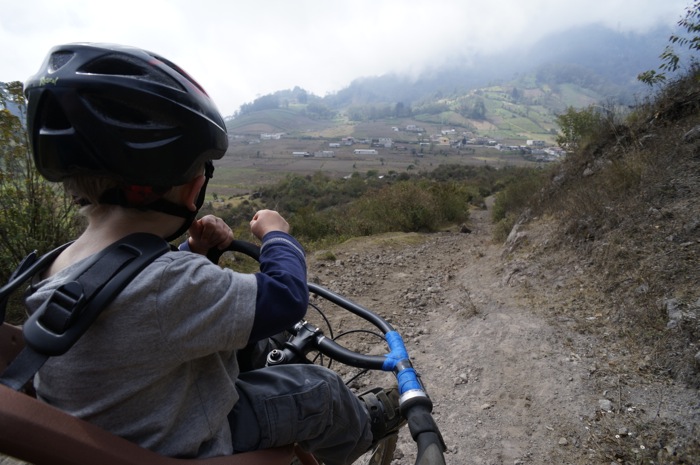 Finn, fist pumping that he can see the road and is closing the loop. Some volcanic rocky sections brought us back to the road system. Big adventure with a toddler. An hour of pedling back to the city and our apartment and Finn did not even want to get out of the seat and could not wait to tell his mom about THE VOLCANO LOOP!

After 2 weeks we all left Xela and headed to Lago Atitlan for some time out of the city and actual vacation for Julie. She got her hands on a bike and we did some rides out of Santigo Atitan. Beautiful area with a relaxed vibe and decent riding. 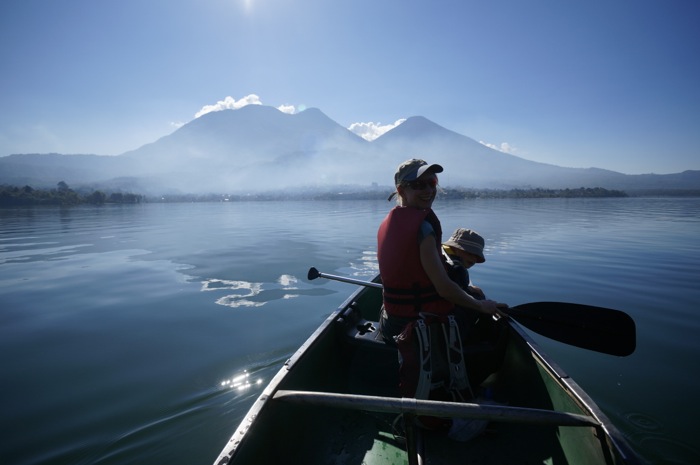 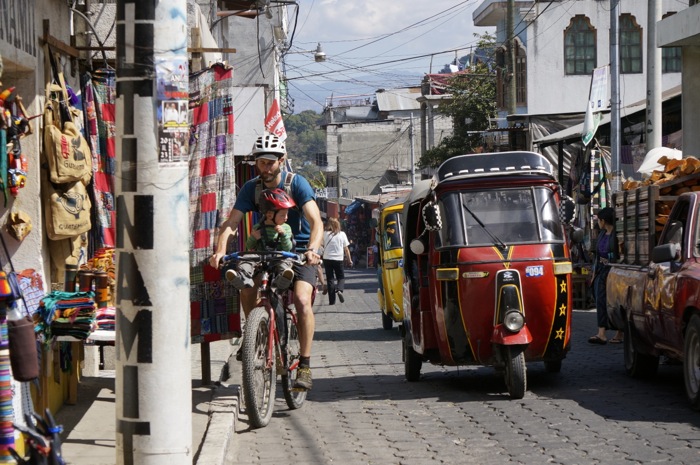 Chicken busses – I have an entire photo book in the works of Guatemalan chicken busses… they really know the definition of “Pimp my ride”. 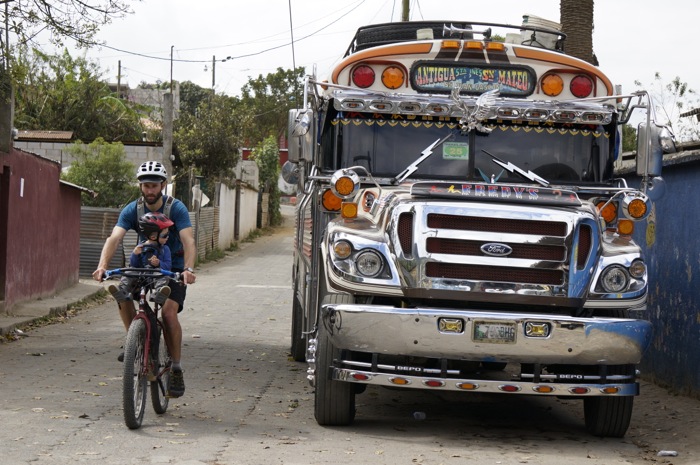 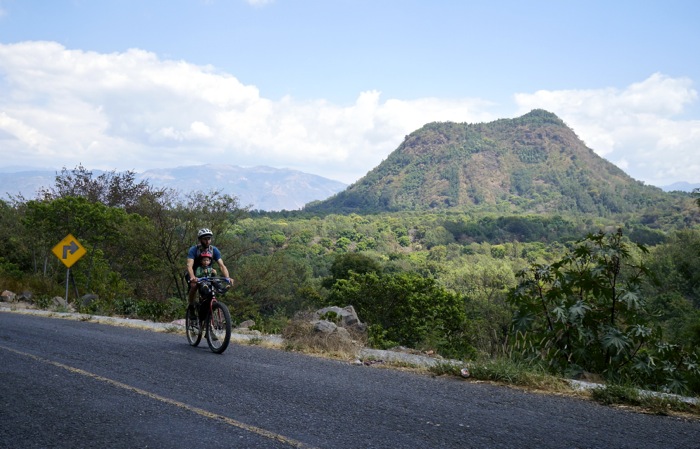 Lastly we all headed to Antigua, close to the airport in Guatemala city for a day of checking out the surroundings. We learned that everything around Antigua is super steep! 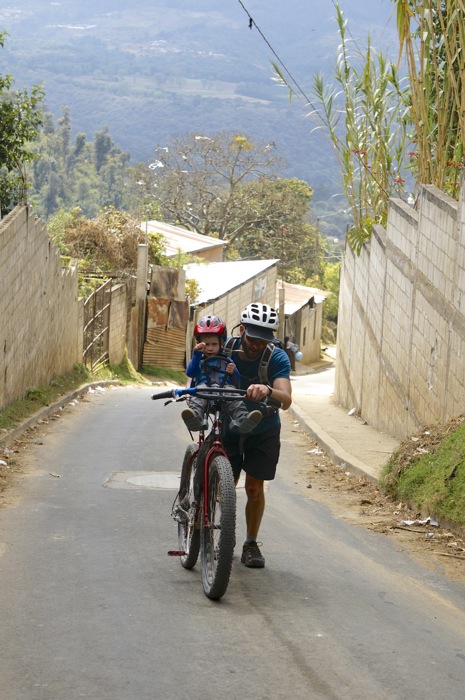 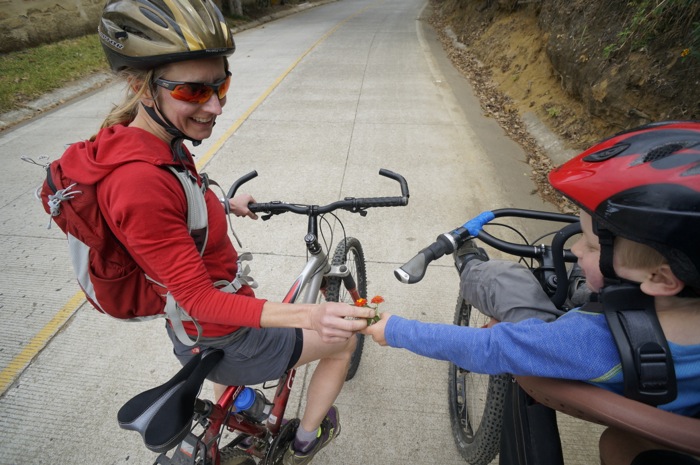 Wonderful 3 weeks and a great trip on all fronts. Opened my eyes to what’s in store for upcoming family bike trips. Thanks for checking in.