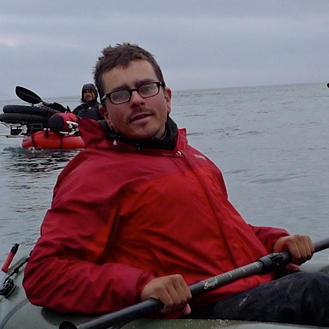 I live in a small town in regional South Australia on the banks of the Murray River, surrounded by orange groves, vineyards and fields full of avocados and sheep.  On many weekends I avoid the waterfront, full of jet skis, moored house boats and holiday makers in all hues of sunburn.  How I ended up here from native Alaska is a good question, but there is no cynicism or doubt in my mind with regards to the cycling paradise north of the river.  Roughly bounded to the west and north by the Barrier Highway, the Silver City Highway to the east, and the Murray River along its southern edge, there is a vast network of sand and dirt tracks here that can take you all the way to Yunta and beyond to The Centre, or to Melrose and then Port Augusta if you want to head west. 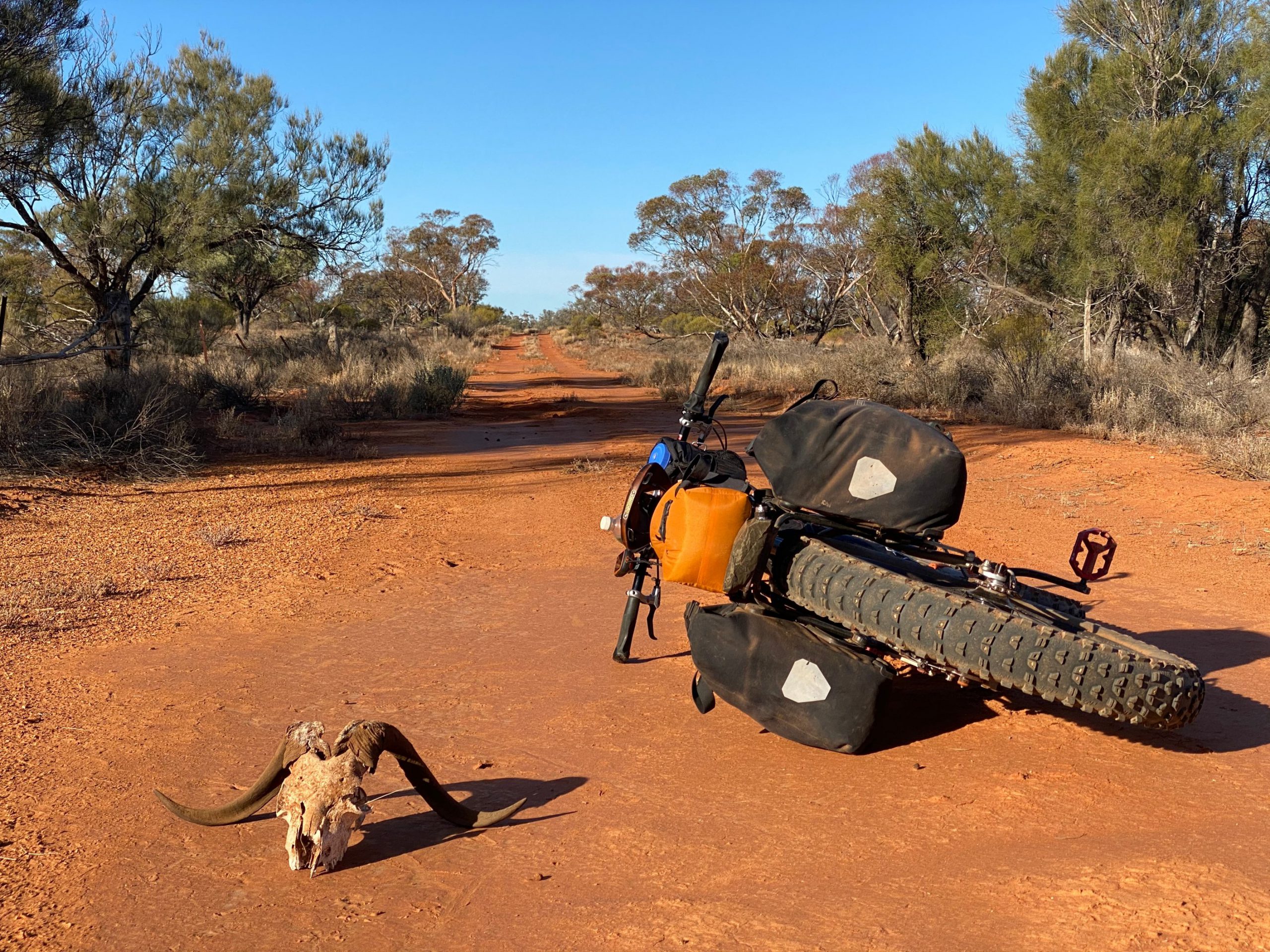 I have never seen another cyclist out in this soft and sandy edenic pocket of land, and can count on two hands the number of vehicles I have seen here not parked in front of a homestead.  Perhaps I’m letting the cat out of the bag with this trip report!  More people spending more time on bikes is probably alright… but I’d recommend at least 45mm wide rims and 3” tires in the sand hills near the river, though I have the most fun and float on tires larger than 4”.  Staying on the Morgan Mail Road, or anything that isn’t fun, small connector tracks, 29×2.2 will usually do you fine. 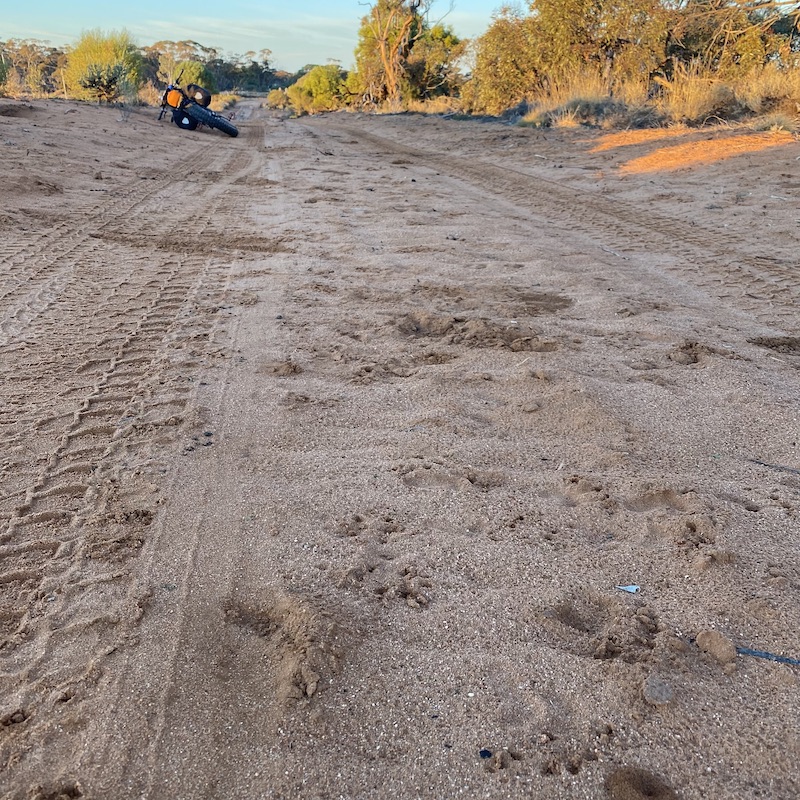 I’ve ridden out here a fair bit on day rides, but recently had a perfect alignment of events that allowed me to take a longer trip that I’ve wanted to go on for a some time: home to Broken Hill, NSW, and back.  I had enough time off from work for riding the four days each way, it was no longer the high temps of summer, winter rains looked like they might hold off for a while, and I had remembered recently to put more sealant in my tires.  I rode a Moots Frosthammer fat bike that I bought used from its original owner several years ago. It has taken me almost an equal amount of time to fix it up and to have it be ridable after moving internationally and then a half dozen times within SA in the last three years.  It has 80mm rims and 26×4.6 tires and was flawless. 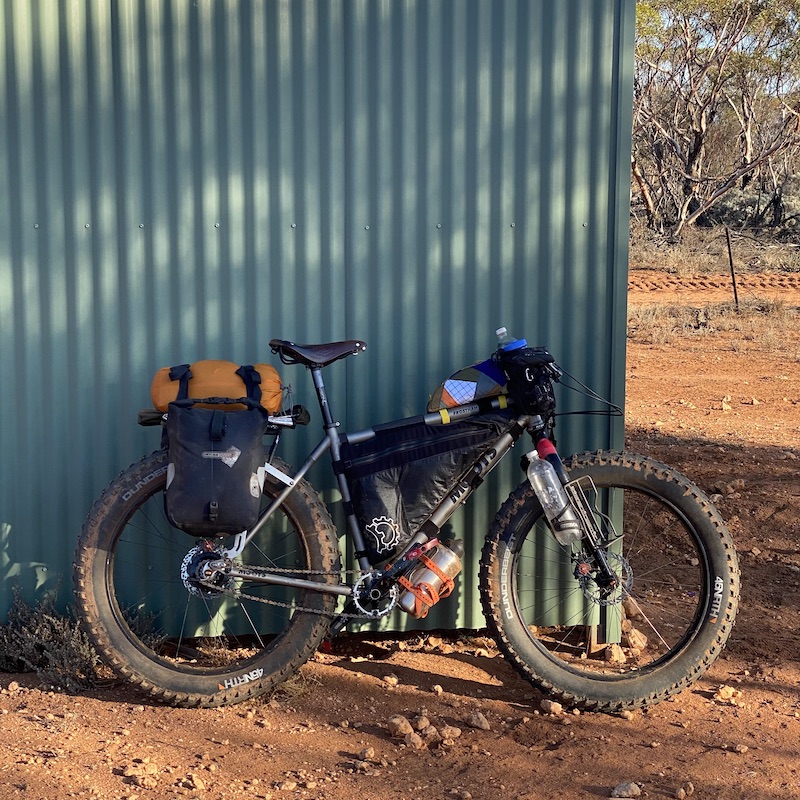 Gear: It is winter in the southern hemisphere now, so our average low temperatures hover around 1 to 3 degrees below zero at night, with daytime highs in the 20s °C.  In a change from my normal packing, which is to take a 2°C summer bag and shiver through the long and dreaded night (it’s dark from about 5:30pm to 6:30am), I took a real winter sleeping bag, rated to -7°C.  I also brought a tent and a full length sleeping pad.  I usually bring a scrap of a windscreen sun visor and pretend it’s long enough.  I also brought a light for night riding, since this is a new-found love and feels so darn special that I wish I could do it all the time.  Riding from about 4am to 6:30am when I could turn off my light felt like cheating, like I’m getting away with something that is too good to be true that I don’t deserve.  The quiet stillness, the peaceful darkness, the pong of feral goats nearby, and the pin pricks of unfathomable salt shaker stars, all that poetic stuff.

When the sun rises and warms your howling fantods numb fingers and toes, you’re 30kms away from where you woke up in the dark!  This is like free distance!  Winter sleep gear, a puff jacket, 3.5 days’ of food, and 14 litres of water meant that it made sense to bring panniers on this trip.  I love panniers!  I consider myself a fairly experienced cycle tourist, but I’m continually learning and appreciate the nuances and changes in gear and technical stuff.  I usually put my tent and pieces of thin nylon with feathers (aka, sleeping bag) in a small Sweetroll on my handlebars, but with panniers for the water, I packed my sleeping gear in those and in doing so I got to bring a stuff sack for my tent for a change.  I love stuff sacks!  The simple nylon bag, which I filled with gloves, food, wind pants, whatever, and used as a pillow, was by far the winner of this trip and was comfortable and cohesive to sleep on. 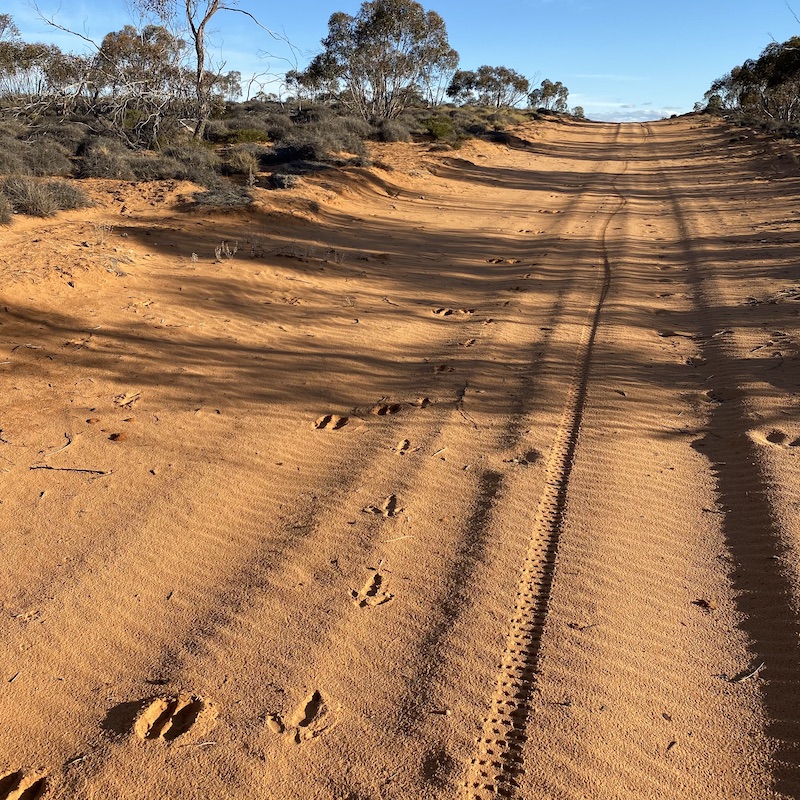 Food: Three-and-a-half days’ worth of food fit easily in my XL Ranger frame bag, besides the gum I kept in my top tube bag.  I chewed two packs of extra peppermint gum throughout the trip. The Gas Tank I got in 2012 for a Hudson Bay bicycle tour finally died just weeks ago after replacement zipper #3 sadly broke and the plastic fastener snapped off — hence the colorful one here, which was made by Evan in Melbourne.  I put 10 litres of water on the bicycle frame and fork legs, and an additional two in each pannier for a total of 14 litres.  Yes, there are dams and stock tanks out there, but I didn’t know where they were, and you never know if the spur to a dam is 5km or 30km long, or even if there will be water in them.  Going north to Broken Hill, I passed one tank I knew of about 45km from home, passed one dam with water that had a dead kangaroo floating in it, and didn’t see any other water until arriving in the city.  This was about 375km, and I also saw no vehicles or people until hitting the highway about 30kms south of Broken Hill.  I talked only to myself for three and a half days and arrived with 1 litre to spare. 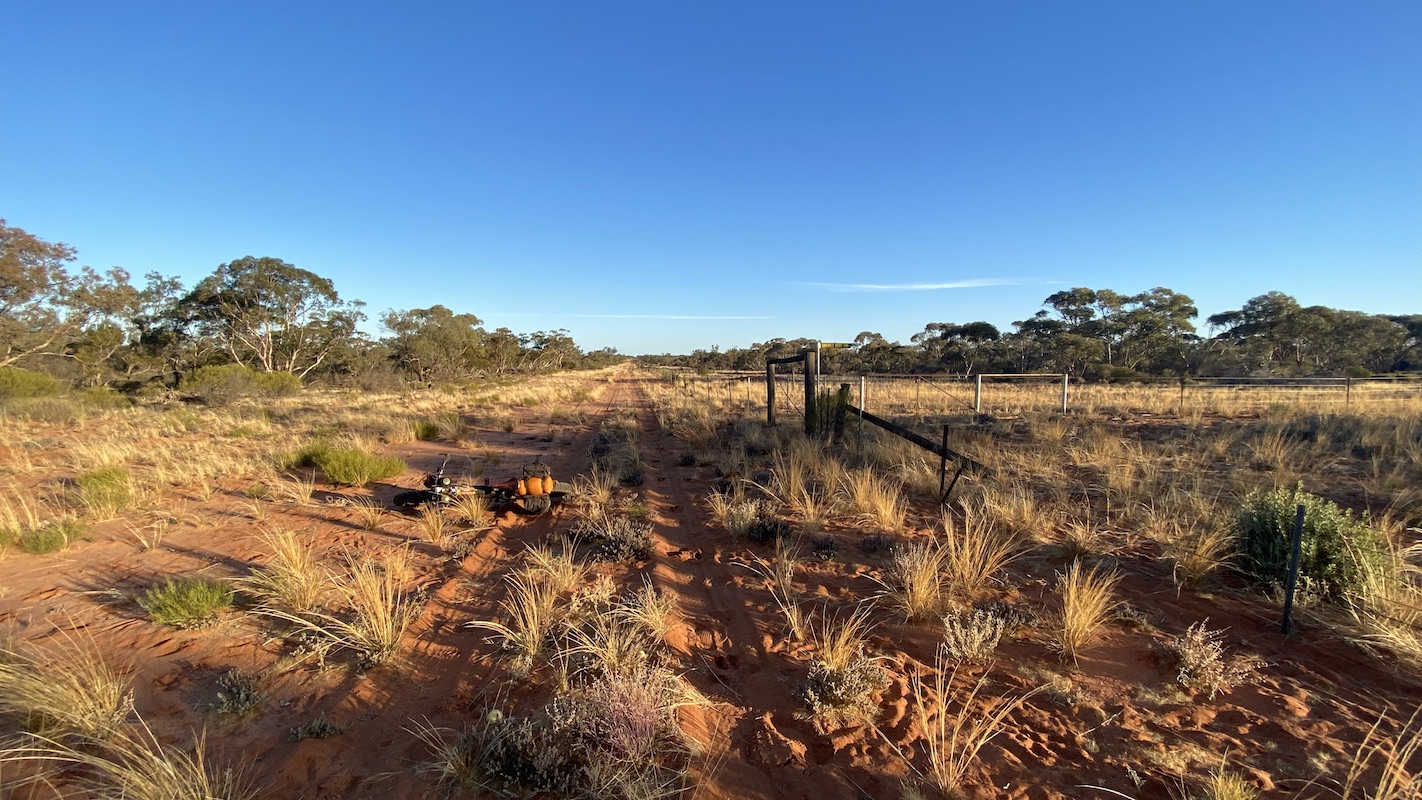 Route: After late morning on the first day, I had passed Gluepot Reserve and was finally onto tracks in the Danggali Wilderness Protection Area that I had never ridden before.  It’s always fun to ride new places.  When in doubt, let air out, so I did, and swam with my bicycle through some not so well-travelled tracks in Danggali and reached the SA/NSW border by evening.  This is where we get into…

Navigation: Etrex 20x on the handlebars, an iPhone with map apps in my pocket, an inReach stowed away in a pannier and three paper photocopies from a Hema road atlas.  Just because you can see a track on satellite imagery and then draw lines there in both RWGPS and Google Maps does not mean those tracks exist.  This is where 26×4.6 shines!  I made good time up the border corridor but eventually ran out of tracks south of Burta homestead.  Riding east from there was relatively fast cruising for an hour, until my digital tracks pointed still east and the maintained road went north.  I did not want to ride all the way north to Cockburn and then east into town on the railroad access roads up there.  Location services on the phone first said I was in Pittsburgh (USA) and then said maybe I was in a tunnel or building and could not determine my location.

Out here the tallest bush is less than a meter high.  I knew where I was nevertheless, where Broken Hill was, how much coffee and oats I had remaining, and how far it was to any sort of road in any direction, so I beelined to some power lines where I could possibly find some wheel ruts and follow those generally east or northeast to the Silver City Highway.  It was a cold, windy morning but the dirt was hard packed, few gates were locked, the brush I could usually slalom around, and so I whooped it up cross country through the roadless region until reaching the highway. 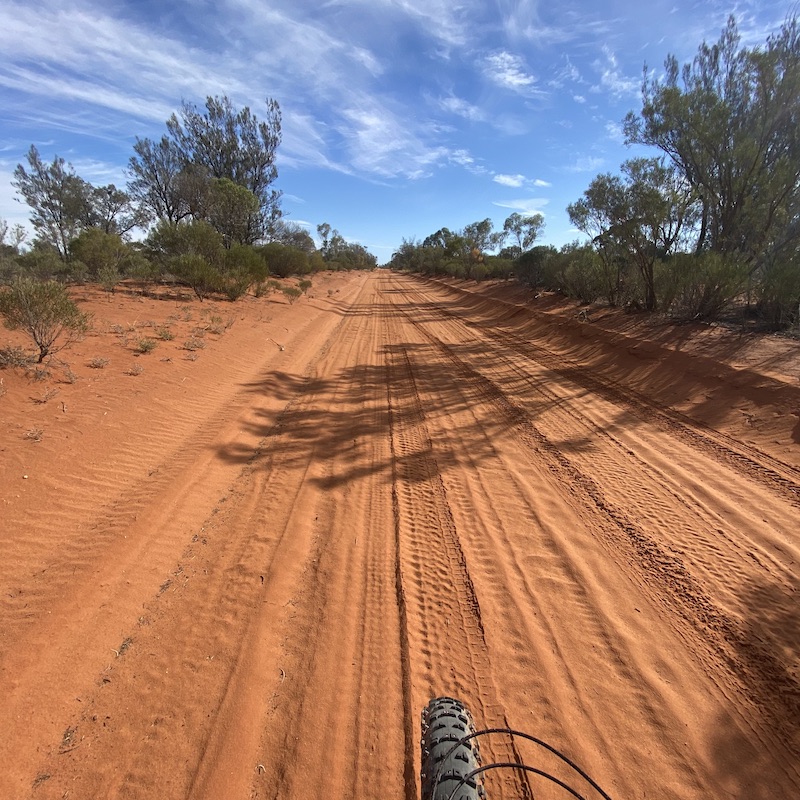 The city: In Broken Hill it poured. There was thunder and lightening. I camped at a state park where fires were prohibited and so I was happy to have brought a stove.  The road to Silverton (“Wake in Fright” film location and where BHP, the mining company, was founded) closed after I went out there; it’s a sealed road but many creeks run across it perpendicularly.  I drank lots of coffee and went to several art galleries, the later activity which was a new thing for me to do on a bike trip.  One kid, furiously punching my sidewall as I drank coffee outside The Silly Goat in the hot sunshine, exclaimed: “Look at the size of those tires!  It’s a weapon!”  Deadly choices.

Returning home via the Mutooroo road, trying to find where I erred going north, didn’t look ideal given the mud that would have been there after the rain, so I took the main highway south for a bit longer than I wanted to, but eventually found new dirt roads that didn’t feel silly to ride on a fat bike.  I did not go to Tipperary Hut or see the ruins at Hypurna; rather I took smaller roads and ended up on The Shotline Track again, seeing both my old tyre tracks and that no vehicles had driven through there in the ten days since I had last visited.  It’s only a few hours cycle to the visitor centre and campgrounds at Gluepot from here, but it felt more remote when I realized that I myself had been the last person there.  I took the same route the last 40kms to get home, and on some of these roads too there were no vehicle tracks fresher than mine, now 11 days old.

I caught the ferry across the Murray, and with a “how ya goin’?” to the operator, talked to the first person in three days.  What I first noticed was the noise!  Not just that of the ferry’s engine, but that mix of the cars idling around me, the cacophony of stereos, hands free Bluetooth calls I could overhear, cigarette lighters scraping to ignite, people coughing.  This was a relatively short trip — eight days of riding over eleven days total — in an unsurprisingly quiet and isolated area but nonetheless I had already grown accustomed to the mallee scrub silences.  I’d go back in a heartbeat. 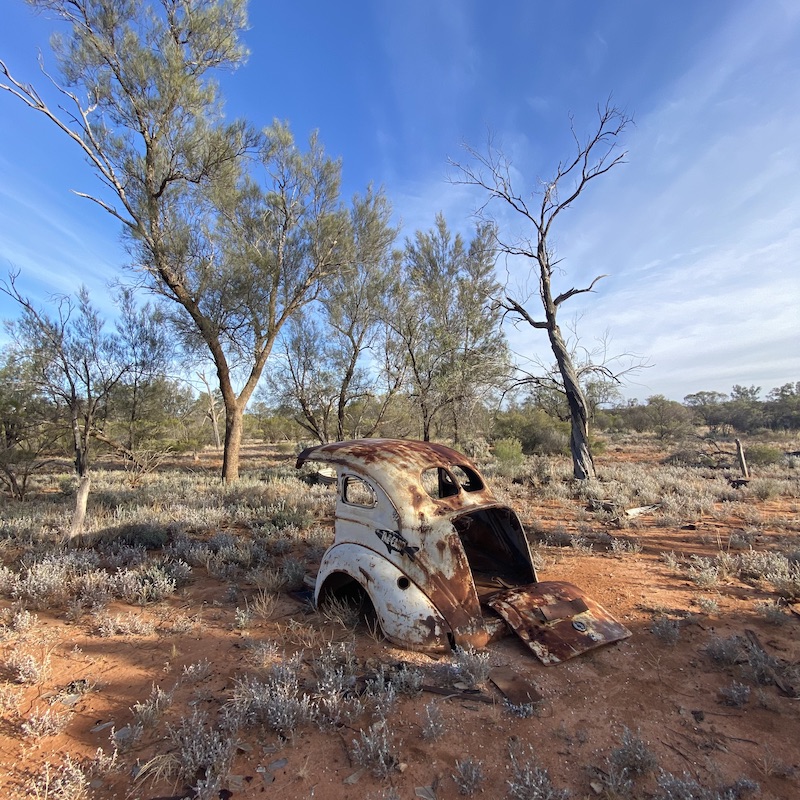 Born and raised in Alaska, Dylan’s savy backcountry skills have taken him on numerous far flung biking adventures such as pioneering packraft beach bike trips along Alaska’s gulf coast. Dylan has ridden from Anchorage to Ushuaia, done laps around the US, and encircled Australia. We never really know where Dylan is, but if you happen to run into him, feed him some buttered ramen and ask him about the time he got hit by lightening.