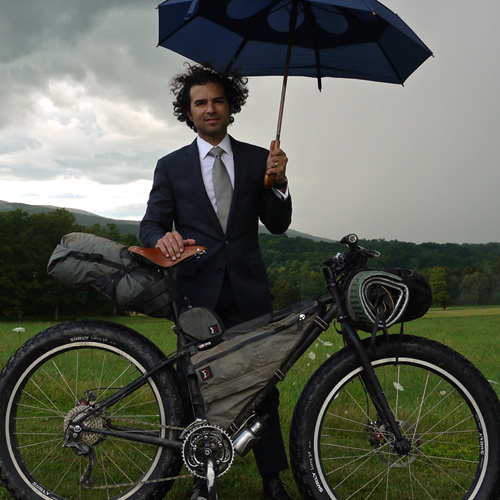 Posted by Joe Cruz in Adventures 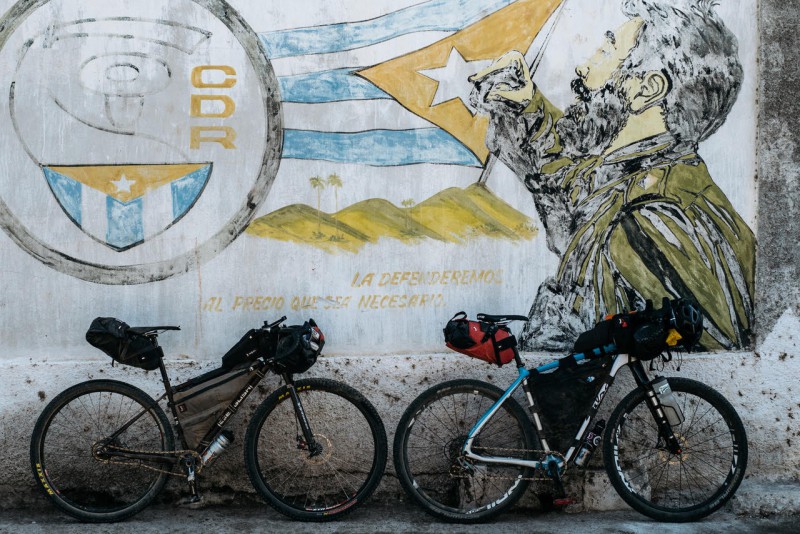 Turn left onto the dirt track, drifting slowly to double check the GPS and that gives her enough time to come rushing out of the schoolhouse to call after us. I stop, her classroom is in a suspended stasis of looking at us through slatted no glass windows, giggling gesticulation little kid squeals. Their teacher, she interrupted their lesson for this, is saying no, no, not that way! The way to Vinales is to stay straight. I smile and take a deep breath, there’s no way that she could know that we have this conversation fifteen times a day,  kind generous Cubans who see some bike riders going in what they regard as an impossibly moronic direction. And they want to help. 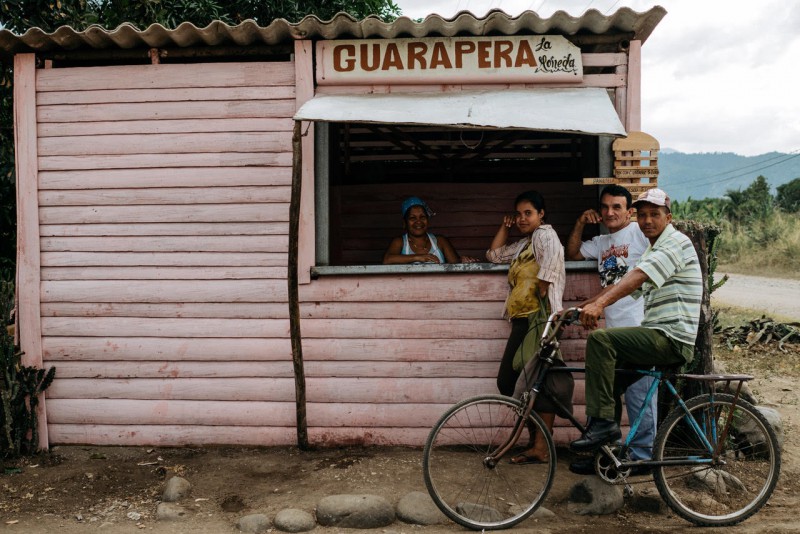 We’ve had to negotiate a fine line. Naturally we want intel about the path ahead and if there’s some real obstacle—an unfordable river, say, or a true dead end—we’d want to know about it. On the other hand, the locals have no practice seeing the unexpectedly expanded limits of our knobby tire multi-geared rigs. They see bicycles and bicyclists want the smoothest most direct route, no? Especially as there are no cars, so why not take the road? Nor is it helpful that generations of cycle tourists in Cuba have clipped their four bulging panniers on to rigid racks with an absurd pig sized duffle across the back to asphalt wobble along on Schwalbe 1.4’s. 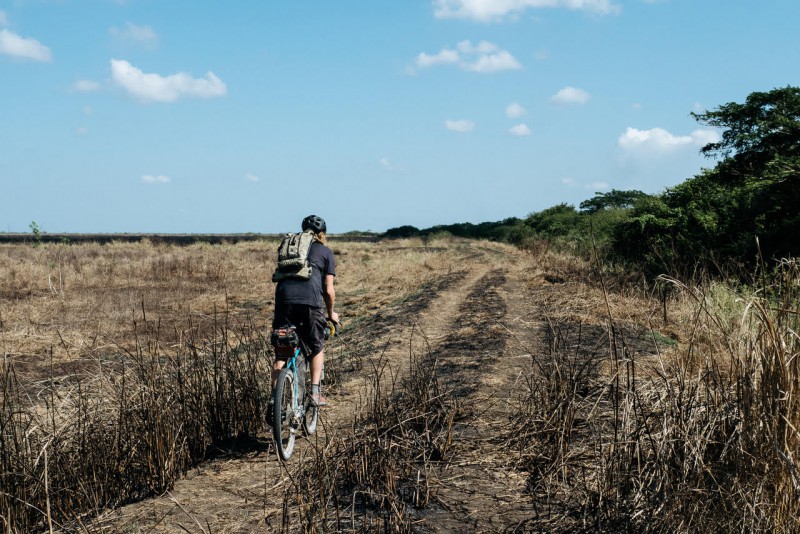 Our route has been a broken meander on the smallest back lanes, cow paths, stony clusterfucked hike-a-bikes, with a dose of wading and lifting sweat skin biting fly swatting. Naturally, we’re having a splendid, demented time. But it takes some negotiation effectively to convey that we’re aiming to do it this way, that, yes, we want to ride on the sendero de caballos and that malo es mejor, a phrase that when I say it, elicits laughs and then, after a few minutes, conceptual comprehension. I venture to the schoolteacher that, according to our map, there’s a trail that goes into the valley and then over a pass to descend to a river, and we want that trail. Again, she says no, it absolutely won’t work.

There’s no trail and it’s not good for bicycles.

But there is a trail?

You can’t go that way.

There’s no trail and it’s not good for bicycles.

We’re laughing together, that’s also a truth about our so-far almost three weeks here. The pre trip images, mojitos, palm trees, 1950’s Detroit classics, Fidel murals and movie set architecture, those images have a kind of veridical presence, too. Owing to the impulse to gifts and joyfulness of Cubans, thanks to how they’ve opened this place to us, we’ve ridden hundreds of kilometers of rattling dirt farm roads, we’ve wild camped and set up our tents on people’s porches and in their yards and on ball fields, we’ve played dominos in the shade on a 90 degree January day, drunk rum with campesinos, had water offered to us from ice filled gas cans strapped to sugar cane harvest equipment. We’ve jungle bushwhacked and Caribbean sand surfed to sleep on the beach and swim in jade water cenotes. We’ve rolled into dusty towns to ask around after the uncertain possibility of food to be offered salchicha sandwiches or Moros y Cristianos con yucca. 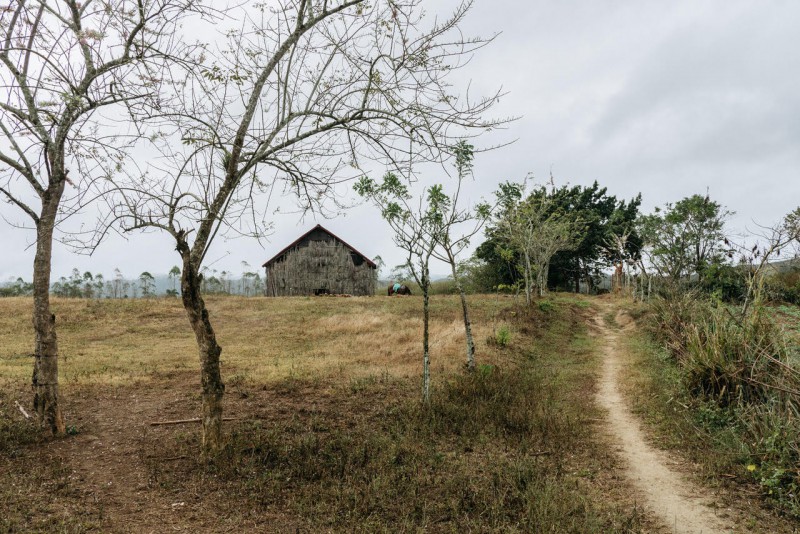 Everywhere we’ve encountered a lucidity and humanity, the idea—made explicit in the reflections of people whose daily rhythms are rural and local but for all that are also globally conscious—the idea that was told to us, we Cubans may be poor but that makes us all in this together, we help each other, we are all family, no one is better than anyone else. And after time spent in people’s homes or in roadside shacks knocking back dubiously cold Cristal beers in the company of so many, the bright smart smile and handshakes and cheek kisses has transformed us into and through friendship. That time when Nuria, after she took us in and fed us the most elemental delicious dishes, and in the morning as we were leaving she rubbed the skin on her arms, black as coal, and she said my skin is this color and yours is different but we’re family and we can’t forget that. We won’t. 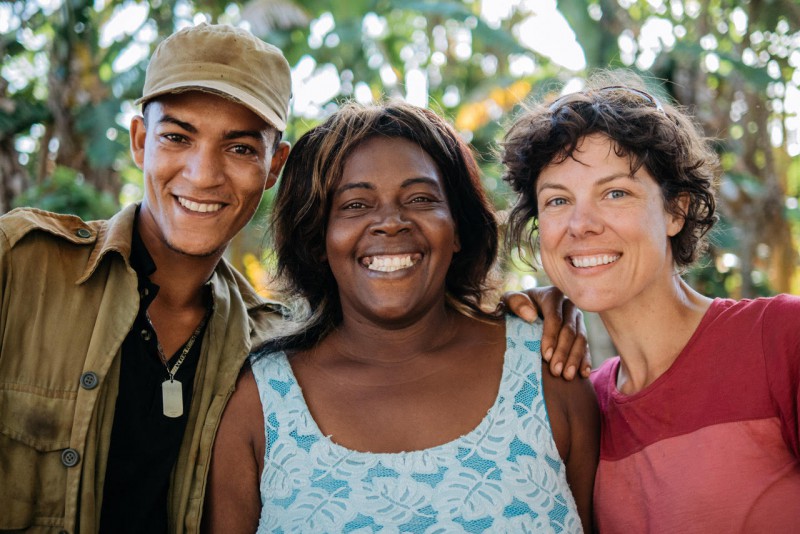 The schoolteacher finally admits that she’s not sure whether our trail exists. We continue on and we’ll have the same back-and-forth three minutes later with a group of neighbors on their porch, finally the oldest old timer will say yes, there is a trail, taking a bike there is the stupidest thing in the world, but there is a trail. We carry on and a half hour later meet a trio of Cuban women on the track with awkward bundles on their backs, they confirm that we’re where we think we are, but no way can you take bicycles there, they add that we should be very careful the track is rocky and definitely don’t try to ride it. Logan instinctively gets on his bike to go down the hill and they literally howl and invoke divine help. And then there’s the horseman an hour later who says of course there is a trail I take it all the time but it’s impossible on bikes. We laugh argue with him for a good ten minutes—it’s his considered view that we should go back to the turn with the school—before he relents and gives us a detailed list of the landmarks that we will see. Then you will start going downhill and you must listen for the river; when you hear it, bushwhack to your left. He predicts we’ll reach the river at 5:30pm, just before dark, if we make it at all. 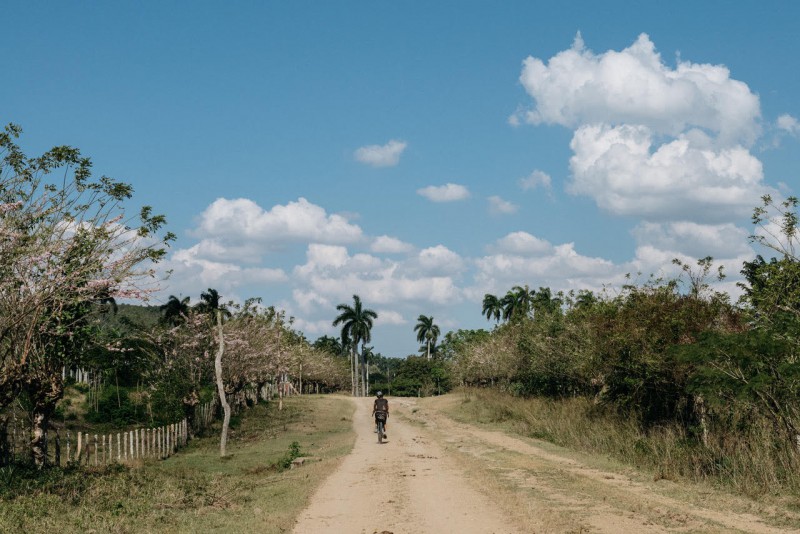 Words and photos by Joe Cruz. You can read more about his adventures on two wheels on his blog Pedaling in Place.

Joe Cruz is a philosophy professor, writer, and expedition cyclist. He has toured and raced bikes the world over. While Joe perfectly well likes rugged, remote, and challenging trips, his favorite bikepacking always includes a substantial cultural and historical element. He thus counts Tibet, Pakistan, and Peru as highlights. Joe and his wife split their time between rural Williamstown, Massachusetts and their beloved native New York City; his blog is Pedaling in Place. Instagram @Joecruzpedaling.