Bikepacking for a Cause – Q&A with Erik Mathy

Posted by Lizzy Scully in Adventures

Erik Mathy, a prolific fund raiser, photographer, and bikepacker, on how he’s doing what he loves to make a difference.

Photography, bicycles, and raising awareness for causes dominate Erik Mathy’s life. He first discovered cycling at eight, but really got hooked after moving to San Francisco and befriending the manager of Start to Finish, an old school bike shop. At 17, he fell in love with photography, when his mom gave him her Pentax K1000. He advanced his skills in college, majoring in photojournalism. And cancer, well that’s not something he ever wanted to focus on. But after five uncles, one aunt, three cousins, and various friends were diagnosed, with only a few surviving, he decided to utilize his two favorite pastimes to raise awareness and money to help prevent others from dying from the disease.

“I hate the way cancer has left gaping holes in so many others lives,” Mathy says. “I feel compelled to do something, anything, about it.” And with that attitude, Mathy has ridden thousands of miles to raise money for various organizations, including the John Wayne Cancer Foundation (JWCF) and the Pablove Foundation’s Shutterbugs program. 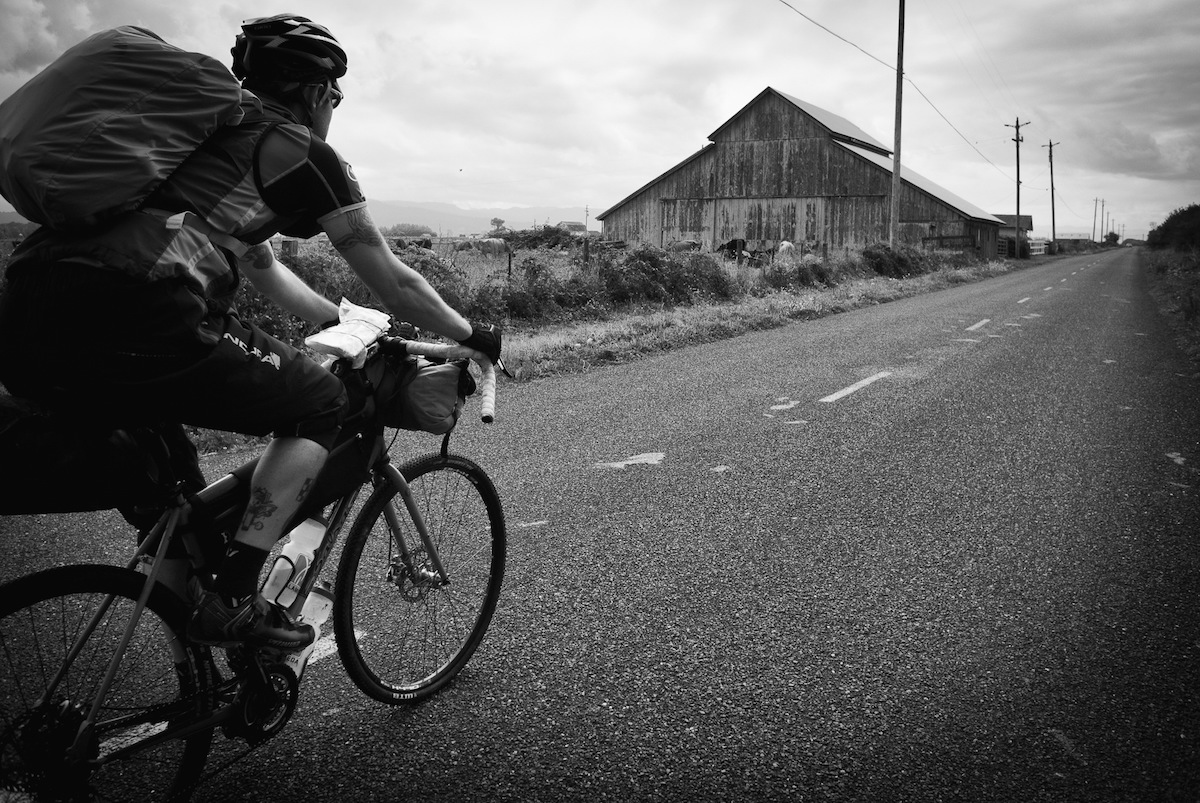 Erik on the 500-mile Lost Coast “Lower” (in California). Photo by Glenn Charles.

“I ride with an insatiable curiosity, never rushing just to rush, observing everything, meeting people, and making images,” Mathy explains.

Mathy is starting yet another bikepacking/fund raising adventure November 1, 2018, this time to heighten awareness for the plight of immigrants. He will bike 1200 miles from San Francisco to Tucson, along the Butterfield Overland Mail Route (the original wagon route from the late 1800’s that ran from St. Louis to SF.) Taking a 50’s era Speed Graphic press camera, he plans to shoot dozens of 3.25×4.25” negatives, using camera lenses he built himself. All proceeds from the images will go to Kids in Need of Defense, a non-profit that supplies legal counsel to children in immigration courts.

“Getting out there to take photographs, explore, meet people while trying to do some good is one of the few outlets I have that keeps me from losing my mind,” Mathy explains. “This route has a TON of things that have happened along it, historically and even recently, that are relevant to conversations we are having today as a society.”

We recently chatted with Mathy about his life, adventures, and what motivates him. You can follow his adventures on Instagram, in Bicycle Journal, and Adobe Creative Magazine will be featuring him in an article and short documentary. 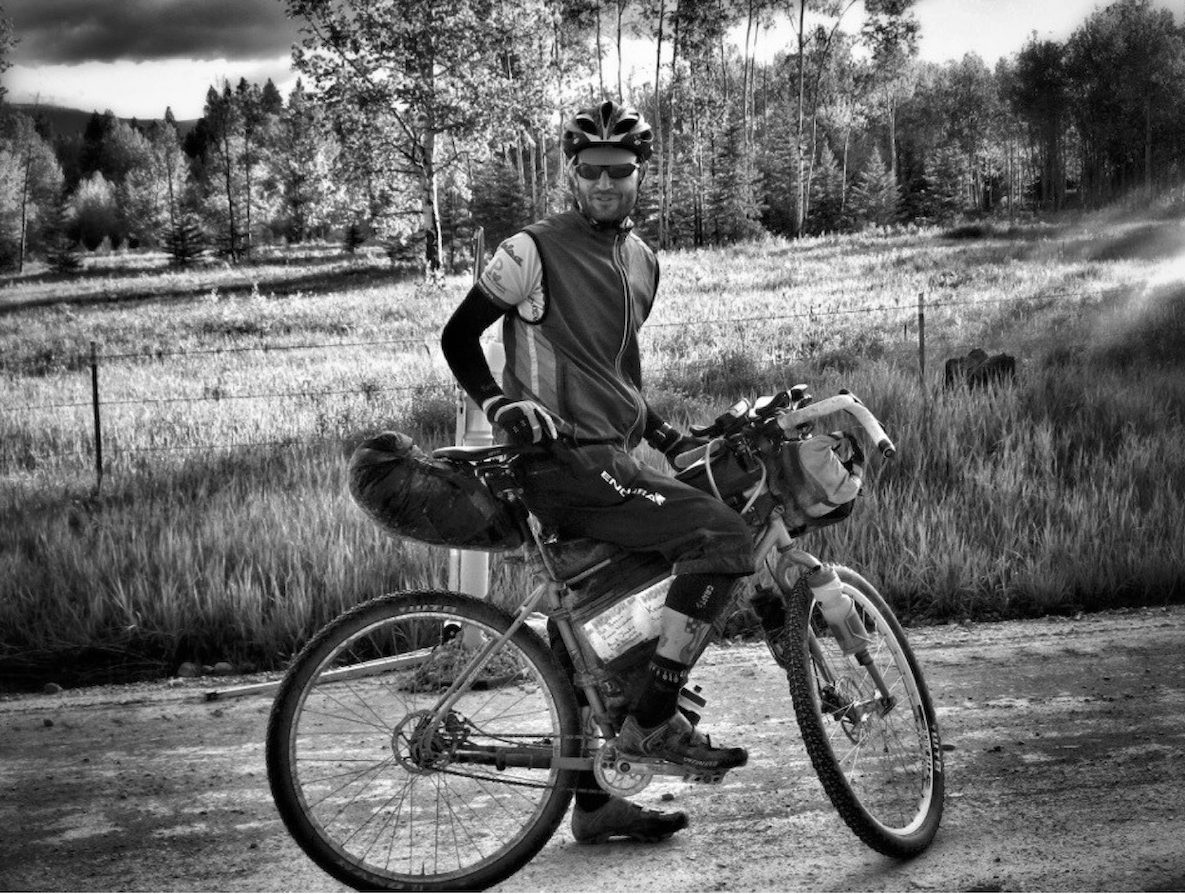 Erik on the Tour Divide. Photo by Adam Guske.

Revelate Designs: When did you do your first overnight trip? And what motivated you to do it?
Erik Mathy: In 2006 I rode the Continental Divide Route on a street plated Honda XR600R in 2006 as a cancer fundraiser in honor of my cousin Scott who had been diagnosed with Non Hodgkins Lymphoma. The route stuck with me. When Scott relapsed in 2009, I thought I would give it a crack. I aimed for the 2011 Tour Divide as my goal and started learning about bikepacking. My rig was a Gen 1 Salsa Fargo, single speed with White Industries hubs. Man, I loved that bike!

RD: Why do you continue to go bikepacking? How does it make you feel?
EM: I’m a photographer with a cycling problem! I made 500ish miles on the Trail Divide before things went sideways, and I dropped. I’d never failed at something that big before, so it really set me back hard, mentally and emotionally. It took a few years to come to grips with it. The realization that I enjoyed the photography component rather than the “let’s be hardcore and plow in big miles” came from riding down the Lost Coast of California with my friends Andrew and Glenn in 2013. It was my first bikepacking trip since the TD. Rolling with those two cats, both great people, Glenn a FANTASTIC photographer, reminded me of that. Really, I’m a terrible racer. Slow. Chatty. Easily distracted by places, people and things. Which conversely is what gives me the greatest enjoyment. Especially when I have a camera with me! 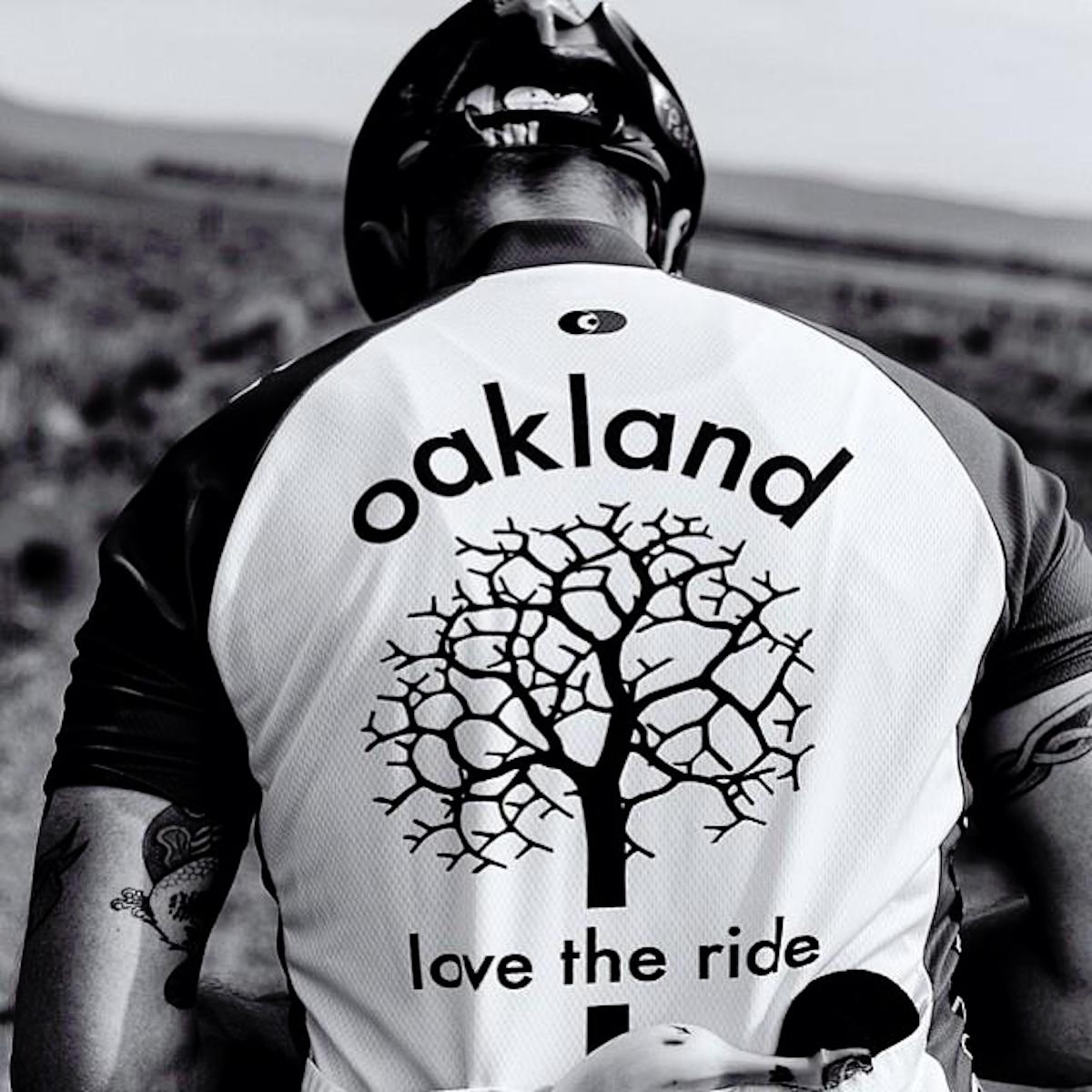 RD: Why do you think it’s a good medium for getting across the messages you wish to get across?
EM: Right now the easiest thing in the world to do is to sit right here, behind this keyboard. Many of us are paid to sit behind a keyboard. We’re taught to experience the world from behind the keyboard instead of experiencing it ourselves. Social interactions are virtual, experiences are virtual, even our politics are virtual. We have keyboard warriors going at it in social media streams based on the echo chambers that huge companies create just to sell more advertising. To be clear, I’m just as guilty as anyone when it comes to being caught up in that trap.

And when people can afford to travel, they go by airplane. A to B. They never experience the little towns, the vistas, folks they’d never otherwise meet or interact with. Bikepacking gets you out there in a way that is both slow and fast. You can make some miles but also be out there seeing everything, being a part of everything. Saying “Hi” to farmers in their pickups and chatting with small store owners. Seeing all the sites near and far. Stopping in the shade, sitting down to eat while enjoying a stunning view. We used to places purely for all of that. Now we travel to curated experiences, like Cabo and Disneyland and cruise ships. It’s just more echo chamber, really. Bikepacking blows right through that.

RD: Why do you raise awareness for various causes?
EM: It’s just the right thing to do. I think it’s as simple as that. I can’t imagine not doing otherwise. 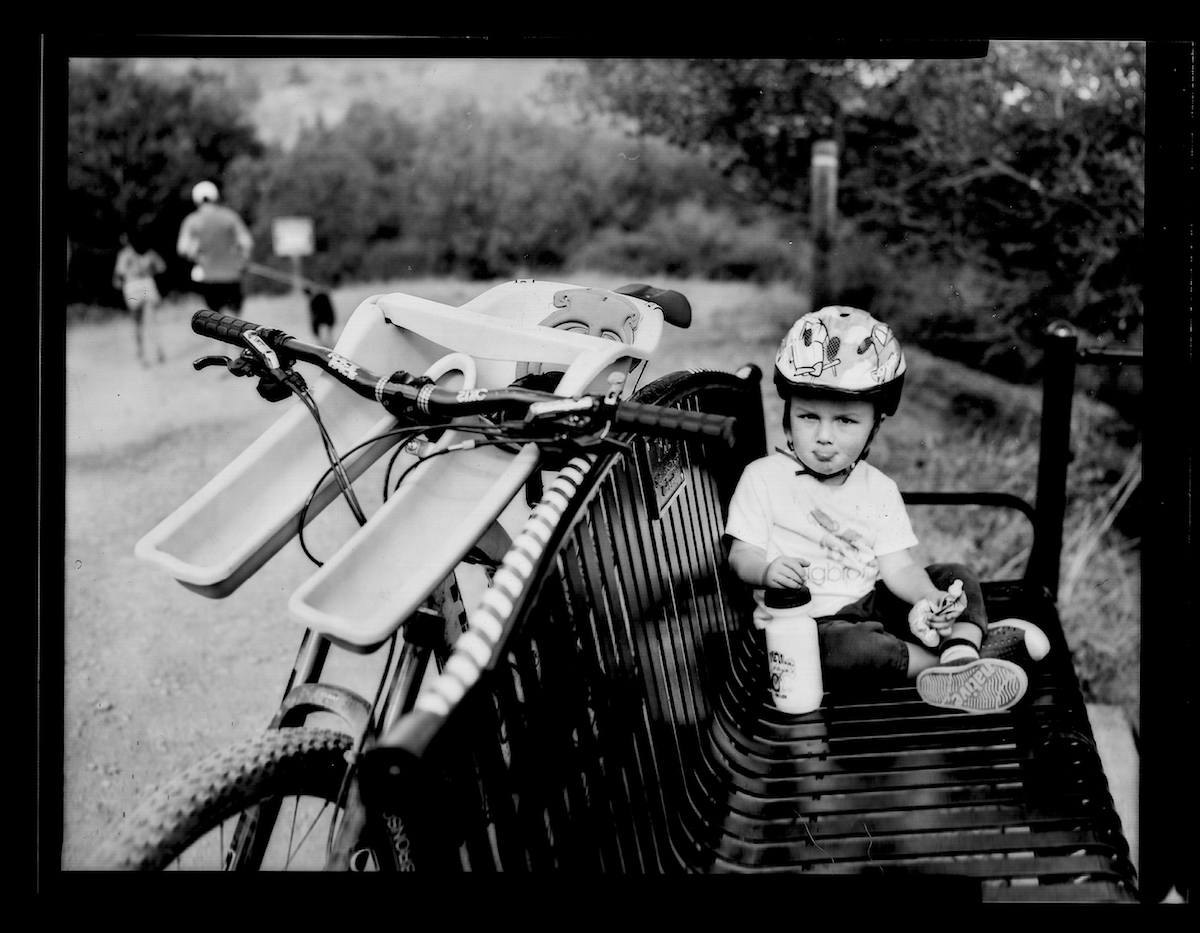 Erik Mathy takes photos, such as this one of “Charlie,” using film, and his own handmade lenses for old, large format cameras.

RD: You use film, and you hand-make your own lenses for old, large format cameras. What is it about this style of photography inspires you?
EM: Along with the rest of the world I switched from film to digital. That was fine, it does the job. For the heck of it I ended up taking a couple of film cameras along on that Lost Coast trip as well as a digital camera. Side by side, the film just had something else. It was like falling in love again. I still shoot digital for paid gigs, but for my personal work, the things that matter to me, those are all shot with film.

On the gear front I was taught, and shot, 35mm almost exclusively. Three years or so ago, when my cousin Brian passed away from cancer, I decided to try my hand at 4×5 cameras. That’s a film camera which shoots 4′ X 5′ negatives. They are HUGE compared to 35mm. Brian was an exceptionally curious guy who was also meticulous in the execution of his passions. 4×5 film cameras typically demand that kind of approach. By nature I am a run and gun kind of guy. Shooting 4×5 was my attempt to channel Brian one last time, take one final lesson from him, before I could bring myself to say “Goodbye.” So I took a 4×5 camera with 200 sheets of film and rode the length of Route 66 as a cancer fundraiser in his honor. 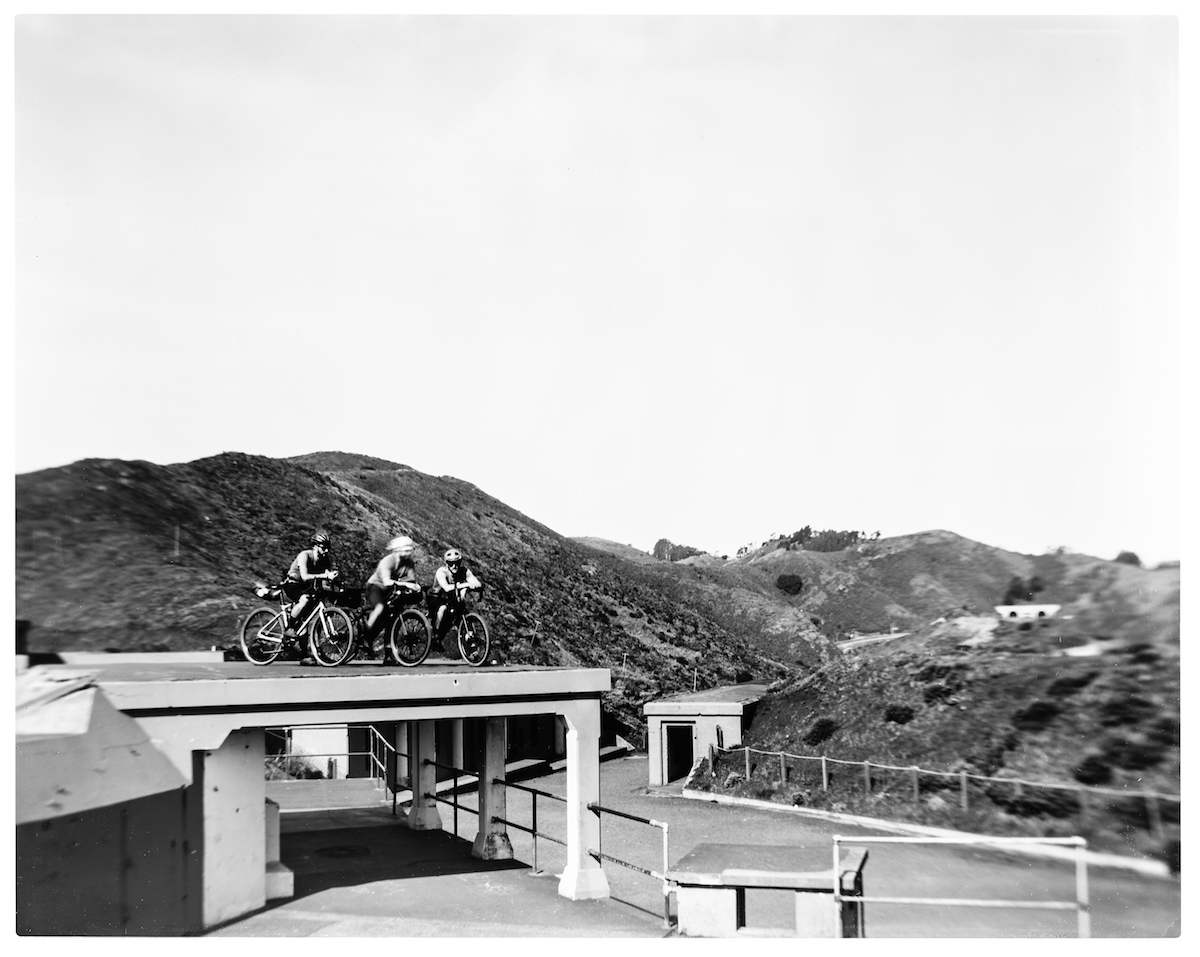 RD: How did you discover Revelate Designs and other key pieces of gear that you now use on your kit?
EM: When I started looking at bikepacking gear, Epic Designs (Eric’s pre-Revelate name) and Carousel Design Works were the only two places to get bags. Several friends recommended Eric. When I emailed him he was kind, friendly, and knowledgeable. The bags arrived exactly when he said they would. I’ve been using them literally ever since with no muss, no fuss, no failures, no bother.

RD: Is there anything we’re not asking that you want to share with us?
EM: I feel really lucky, honestly. The entire bikepacking thing has led to incredible changes in my life. I’ve made friendships that will last forever, had experiences I could have only dreamed of having before, and been pushed in photographic directions I didn’t know existed. 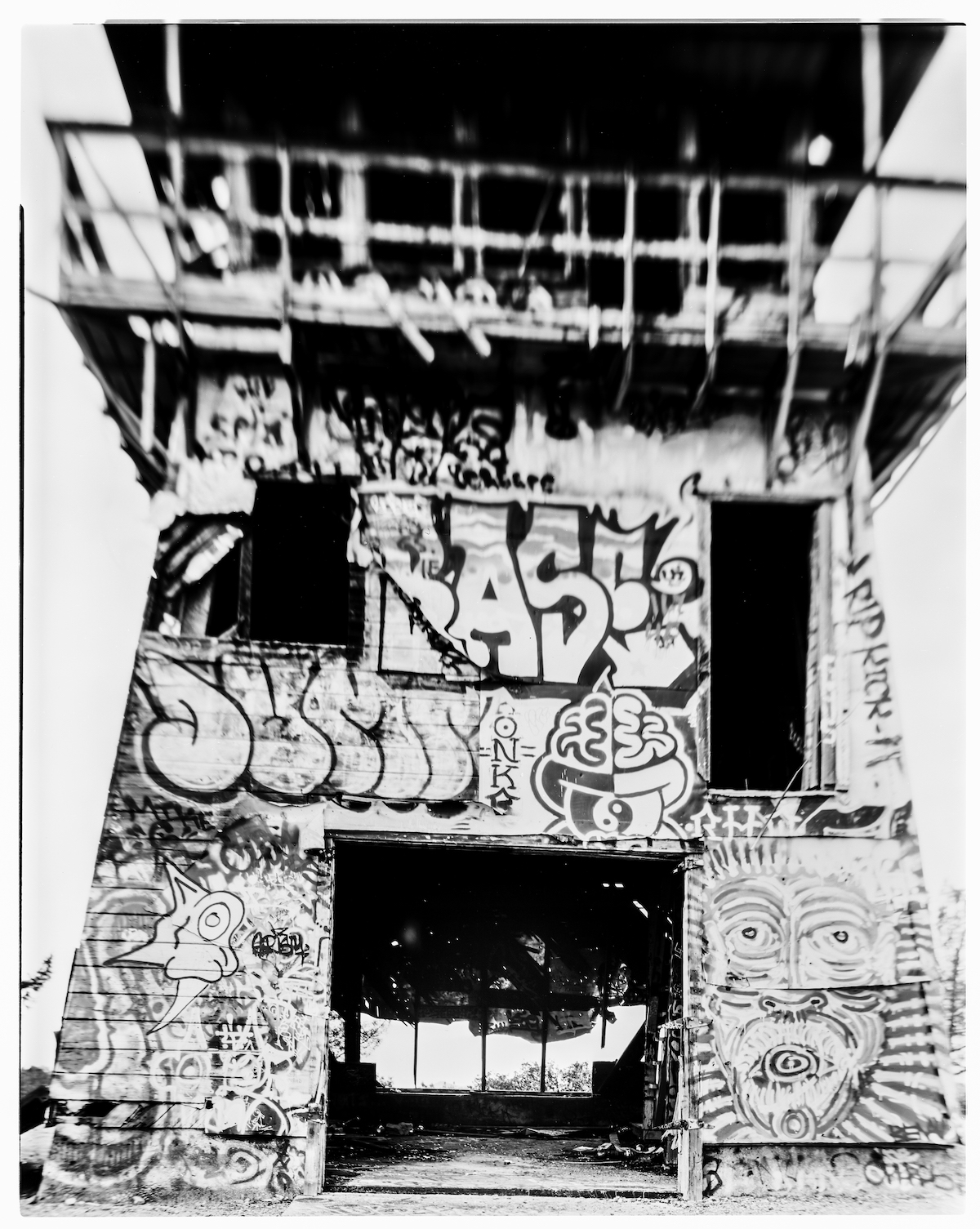